Application Of Multivariate Statistical Methods In . 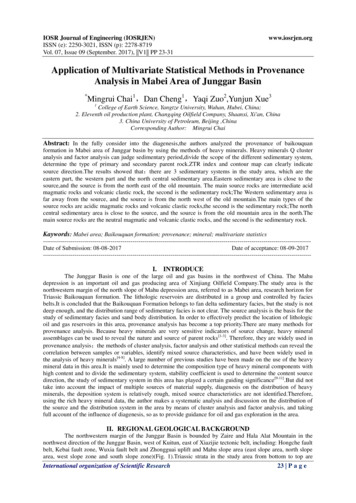 IOSR Journal of Engineering (IOSRJEN)ISSN (e): 2250-3021, ISSN (p): 2278-8719Vol. 07, Issue 09 (September. 2017), V1 PP 23-31www.iosrjen.orgApplication of Multivariate Statistical Methods in ProvenanceAnalysis in Mabei Area of Junggar Basin*Mingrui Chai1，Dan Cheng1，Yaqi Zuo2,Yunjun Xue31College of Earth Science, Yangtze University, Wuhan, Hubei, China;2. Eleventh oil production plant, Changqing Oilfield Company, Shaanxi, Xi'an, China3. China University of Petroleum, Beijing ,ChinaCorresponding Author: Mingrui ChaiAbstract: In the fully consider into the diagenesis,the authors analyzed the provenance of baikouquanformation in Mabei area of Junggar basin by using the methods of heavy minerals. Heavy minerals Q clusteranalysis and factor analysis can judge sedimentary period,divide the scope of the different sedimentary system,determine the type of primary and secondary parent rock.ZTR index and contour map can clearly indicatesource direction.The results showed that：there are 3 sedimentary systems in the study area, which are theeastern part, the western part and the north central sedimentary area.Eastern sedimentary area is close to thesource,and the source is from the north east of the old mountain. The main source rocks are intermediate acidmagmatic rocks and volcanic clastic rock, the second is the sedimentary rock;The Western sedimentary area isfar away from the source, and the source is from the north west of the old mountain.The main types of thesource rocks are acidic magmatic rocks and volcanic clastic rocks,the second is the sedimentary rock;The northcentral sedimentary area is close to the source, and the source is from the old mountain area in the north.Themain source rocks are the neutral magmatic and volcanic clastic rocks, and the second is the sedimentary rock.Kaywords: Mabei area; Baikouquan formation; provenance; mineral; multivariate --------------------------------------------Date of Submission: 08-08-2017Date of acceptance: ---------------------------------------------I. INTRODUCEThe Junggar Basin is one of the large oil and gas basins in the northwest of China. The Mahudepression is an important oil and gas producing area of Xinjiang Oilfield Company.The study area is thenorthwestern margin of the north slope of Mahu depression area, referred to as Mabei area, research horizon forTriassic Baikouquan formation. The lithologic reservoirs are distributed in a group and controlled by faciesbelts.It is concluded that the Baikouquan Formation belongs to fan delta sedimentary facies, but the study is notdeep enough, and the distribution range of sedimentary facies is not clear. The source analysis is the basis for thestudy of sedimentary facies and sand body distribution. In order to effectively predict the location of lithologicoil and gas reservoirs in this area, provenance analysis has become a top priority.There are many methods forprovenance analysis. Because heavy minerals are very sensitive indicators of source change, heavy mineralassemblages can be used to reveal the nature and source of parent rocks [1-3]. Therefore, they are widely used inprovenance analysis；the methods of cluster analysis, factor analysis and other statistical methods can reveal thecorrelation between samples or variables, identify mixed source characteristics, and have been widely used inthe analysis of heavy minerals[4-8]. A large number of previous studies have been made on the use of the heavymineral data in this area.It is mainly used to determine the composition type of heavy mineral components withhigh content and to divide the sedimentary system, stability coefficient is used to determine the content sourcedirection, the study of sedimentary system in this area has played a certain guiding significance [9-11].But did nottake into account the impact of multiple sources of material supply, diagenesis on the distribution of heavyminerals, the deposition system is relatively rough, mixed source characteristics are not identified.Therefore,using the rich heavy mineral data, the author makes a systematic analysis and discussion on the distribution ofthe source and the distribution system in the area by means of cluster analysis and factor analysis, and takingfull account of the influence of diagenesis, so as to provide guidance for oil and gas exploration in the area.II. REGIONAL GEOLOGICAL BACKGROUNDThe northwestern margin of the Junggar Basin is bounded by Zaire and Hala Alat Mountain in thenorthwest direction of the Junggar Basin, west of Kuitun, east of Xiazijie tectonic belt, including: Hongche faultbelt, Kebai fault zone, Wuxia fault belt and Zhongguai uplift and Mahu slope area (east slope area, north slopearea, west slope zone and south slope zone)(Fig. 1).Triassic strata in the study area from bottom to top areInternational organization of Scientific Research23 P a g e

Application of Multivariate Statistical Methods in Provenance Analysis in Mabei Area of Junggardivided into:Baikouquan formation (T 1b) and Karamay group (T 2k), Baijiantan group (T3b), the Baikouquanformation purpose layer (T Ib) from the first paragraph can be divided into T1b1, T1b2 and TIb3, T1b2 period as themain oil layer.The reservoirs of the Baikouquan Formation are mainly composed of sand and gravel, and thesedimentary background is shallow fan delta deposition in the background of gentle slope. The fan delta plainsubfacies and fan delta front subfacies are developed. The front part of each fan is prone to intersecting, Fanrange and boundary is not easy to identify.And the north slope of area mainly developed Xiazijie fan deltasystem, Marcy slope area mainly developed Huangyangquan fan delta system, in order to explore the Xiazijiefan delta distribution and two fan intersection boundary, the study area including Mabei slope area and adjacentparts of Marcy slope.And because the second paragraph is the main oil-bearing section, heavy mineralinformation is rich, selected as the study horizon.Fig. 1 Tectonic map of the northwest margin of junggar basin (the area of the red dotted line is the research area)III. PRINCIPLES AND METHODSClustering analysis is an effective way to study the problem of "Like attracts like", which canautomatically classify samples or variables according to their intimacy in nature without prior knowledge.According to the purpose of the study and the object, the cluster analysis is divided into Q type and R type.Q-type clustering analysis is to study the relationship between the samples, R-type cluster analysis is to studythe relationship between variables。Factor analysis can integrate variables with complicated relations into a fewindependent factors, thus using a few factors instead of the original variables to simplify the analysis [13]。In the analysis of heavy minerals,the predecessors have done a lot of research on these methods [4-6, 8,14-18], and the specific ideas are as follows: The sediments formed during geological history are often mixed bymultiple stages of sediment supply, and the sediments of the same stage have the same or similar heavy mineralassemblage characteristics;While the sediments of different periods are characterized by different heavy mineralassemblages due to different types of parent rocks.Using Q-type clustering analysis, different groups of sampleswith different characteristics in the vertical direction can be distinguished as sediments of different periods, eachof which represents the supply of sediment for a certain period.On this basis, with the help of R cluster analysiswill be processed with heavy mineral data in a period,and the different heavy mineral assemblage types wereobtained. The same heavy mineral assemblage type was regarded as the same depositional system, and differentdeposition zones were divided.Q-type clusters can also be used to analyze the same period of heavy mineral data,each sample group represents a different deposition system, which divided the different deposition area.On thebasis of determining the sedimentary system, factor analysis was carried out to identify the characteristics ofheavy mineral assemblage and the type of rock in the parent rock area.It should be noted that R-type clusteranalysis can also determine the characteristics of heavy mineral assemblage,but could not determine the mainand secondary parent rock, and through factor analysis variance of different factors, will be a very goodInternational organization of Scientific Research24 P a g e

Application of Multivariate Statistical Methods in Provenance Analysis in Mabei Area of Junggar3490.6026.2061.607.001.401.101.90 0.00 0.100.000.000.00The Q-cluster analysis of these 15 samples was carried out, and the Q-type cluster analysis spectrum ofM001 wells was obtained (Fig. 2). When the class spacing is 11, all the samples are vertically clustered into onecategory, that is, these samples have the same or similar heavy mineral combination characteristics, indicatingthat M001 wells have experienced a period of deposition process. The above methods were used to analyze thewell bits of M003, M006, M9 and other heavy minerals with more than 10 samples were analyzed. The resultsshowed that the second stage of the study area experienced a sedimentary supply process.Fig. 2 Q-type clustering spectra of heavy minerals in M001 well.4.1.2 Depositional system divisionDifferent sedimentary systems show different combinations of heavy minerals because of differentparent rock types, so that the development range of each sedimentary system can be delineated according to theresults of Q-type cluster analysis. Since the Baihua Quaternary section is mainly subjected to a process ofsediment supply, the heavy mineral data for each well is averaged (Table 2), which makes it more accurate toreflect the heavy mineral content of single well. And then Q-type clustering analysis of all well heavy mineraldata, Q-type clustering analysis spectrum (Fig. 3).Table 2 Study area hHeavy mineral content H012AH7MX1AH2M18Epidote Limonite ational organization of Scientific 01.751.531.551.55Rutile 000.100.000.040.070.491.680.001.701.672.602.5326 P a g e

Application of Multivariate Statistical Methods in Provenance Analysis in Mabei Area of 000.000.280.200.000.000.180.360.390.38Fig. 3 Q-type clustering spectra of heavy minerals in the study area.When the class spacing is 13, all the samples are obviously divided into 4 categories, and the contentsof various heavy minerals are shown in table 3. The analysis found that the first and third kinds of heavyminerals are epidote, ilmenite, leucoxene - limonite, wells distribution similar to that belong to the samesedimentary system, called the first area. It is important to note that the diagenetic environment in the study areais prone to produce authigenic epidote[19, 20], the first class was clustered alone, because of high content ofepidote, widely developed authigenic epidote, showed that the firs class of late diagenesis effect. The secondtype of heavy mineral assemblage is Magnetite - lacquered stone - zircon - pyrite, called the second zone. Thefourth type of heavy mineral assemblage is ilmenite-lacquered stone-Limonite-barite, called the third zone (Fig. 4).International organization of Scientific Research27 P a g e

Application of Multivariate Statistical Methods in Provenance Analysis in Mabei Area of Junggarnorthwest to south east, and the source is from the northwest.Fig.5 Q-type clustering and ZTR contours of heavy minerals in the study area.4.3 Factor analysis - defining the parent rock typeThe heavy mineral samples in 3 sedimentary areas were analyzed by factor analysis to determine thecombined characteristics of heavy minerals, and then to determine the types of parent rocks and their primaryand secondary sources. The sample wells in the first district are mainly distributed in the eastern part of thestudy area. In the factor analysis, three common factors, F1, F2 and F3, are extracted according to the principleof eigenvalue greater than 1, and their cumulative contribution rate is 84.147% (Table 4), which can reflect thebasic information of the original data. As can be seen from the table, factor F1 and F3 provide a contributionrate of 60.134% of the total contribution rate, indicating that factor F1 and F3 control are the major sources. Theheavy mineral assemblage characteristics of ilmenite magnetite pyrite leucoxene, tourmaline epidote limonite, manifested as magmatite rock types,combined with the rock type of the source area, magmatic rocksinclude mid-acid magmatic rocks and volcanic clastic rocks; The factor F2 provides a smaller contribution rateof 24.013%, indicating that the factor F2 controls the secondary source. From the higher factor load values it canbe seen that the heavy mineral assemblage represented by the factor F2 is characterized by limonite zircon garnet, expressed as sedimentary rocks of the parent rock type.Table 4 Total variance and factor loading matrix explained by one area sample.Total variance explainedRotational component 8 0.035 0.05822.40124.01361.889Pyrite0.876 0.164 0.01332.22622.25984.147Leucoxene 0.762 -0.529 0.06640.9929.9294.067Magnetite 0.683 -0.283 0.18950.3763.75897.826Zircon0.661 0.455 -0.26960.2022.02499.85Garnet0.094 0.966 0.11370.0150.15100Barite-0.167 0.887 0.06383.16E-163.16E-15100Tourmaline 0.152 -0.087 0.9589-4.52E-17 -4.52E-16100Epidote-0.028 -0.093 -0.924International organization of Scientific Research29 P a g e

MAHALANOBISDISTANCE AND ITS APPLICATION FOR