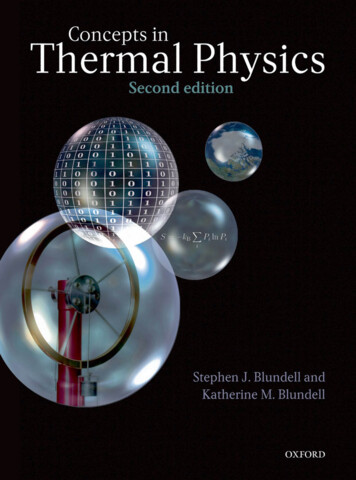 3Great Clarendon Street, Oxford OX2 6DPOxford University Press is a department of the University of Oxford.It furthers the University’s objective of excellence in research, scholarship,and education by publishing worldwide inOxford New YorkAuckland Cape Town Dar es Salaam Hong Kong KarachiKuala Lumpur Madrid Melbourne Mexico City NairobiNew Delhi Shanghai Taipei TorontoWith offices inArgentina Austria Brazil Chile Czech Republic France GreeceGuatemala Hungary Italy Japan Poland Portugal SingaporeSouth Korea Switzerland Thailand Turkey Ukraine VietnamOxford is a registered trade mark of Oxford University Pressin the UK and in certain other countriesPublished in the United Statesby Oxford University Press Inc., New York Stephen J. Blundell and Katherine M. Blundell 2010The moral rights of the authors have been assertedDatabase right Oxford University Press (maker)First edition published in 2006Second edition published in 2010All rights reserved. No part of this publication may be reproduced,stored in a retrieval system, or transmitted, in any form or by any means,without the prior permission in writing of Oxford University Press,or as expressly permitted by law, or under terms agreed with the appropriatereprographics rights organization. Enquiries concerning reproductionoutside the scope of the above should be sent to the Rights Department,Oxford University Press, at the address aboveYou must not circulate this book in any other binding or coverand you must impose the same condition on any acquirerBritish Library Cataloguing in Publication DataData availableLibrary of Congress Cataloging in Publication DataData availablePrinted in Great Britainon acid-free paper byCPI Antony Rowe, Chippenham, Wilts.ISBN 978–0–19–956209–1 (Hbk.)ISBN 978–0–19–956210–7 (Pbk.)10 9 8 7 6 5 4 3 2 1

PrefaceIn the beginning was the Word. . .(John 1:1, ﬁrst century AD)Consider sunbeams. When the sun’s rays let inPass through the darkness of a shuttered room,You will see a multitude of tiny bodiesAll mingling in a multitude of waysInside the sunbeam, moving in the void,Seeming to be engaged in endless strife,Battle, and warfare, troop attacking troop,And never a respite, harried constantly,With meetings and with partings everywhere.From this you can imagine what it isFor atoms to be tossed perpetuallyIn endless motion through the mighty void.(On the Nature of Things, Lucretius, ﬁrst century BC). . . (we) have borne the burden of the work and the heat of the day.(Matthew 20:12, ﬁrst century AD)Thermal physics forms a key part of any undergraduate physics course.It includes the fundamentals of classical thermodynamics (which wasfounded largely in the nineteenth century and motivated by a desire tounderstand the conversion of heat into work using engines) and also statistical mechanics (which was founded by Boltzmann and Gibbs, and isconcerned with the statistical behaviour of the underlying microstates ofthe system). Students often ﬁnd these topics hard, and this problem isnot helped by a lack of familiarity with basic concepts in mathematics,particularly in probability and statistics. Moreover, the traditional focusof thermodynamics on steam engines seems remote and largely irrelevantto a twenty-ﬁrst century student. This is unfortunate since an understanding of thermal physics is crucial to almost all modern physics andto the important technological challenges which face us in this century.The aim of this book is to provide an introduction to the key concepts in thermal physics, ﬂeshed out with plenty of modern examplesfrom astrophysics, atmospheric physics, laser physics, condensed matterphysics and information theory. The important mathematical principles, particularly concerning probability and statistics, are expoundedin some detail. This aims to make up for the material which can nolonger be automatically assumed to have been covered in every school

viiimathematics course. In addition, the appendices contain useful mathematics, such as various integrals, mathematical results and identities.There is, unfortunately, no shortcut to mastering the necessary mathematics in studying thermal physics, but the material in the appendixprovides a useful aide-mémoire.Many courses on this subject are taught historically: the kinetic theory of gases, then classical thermodynamics are taught ﬁrst, with statistical mechanics taught last. In other courses, one starts with theprinciples of classical thermodynamics, followed then by statistical mechanics and kinetic theory is saved until the end. Although there ismerit in both approaches, we have aimed at a more integrated treatment. For example, we introduce temperature using a straightforwardstatistical mechanical argument, rather than on the basis of a somewhatabstract Carnot engine. However, we do postpone detailed consideration of the partition function and statistical mechanics until after wehave introduced the functions of state, which manipulation of the partition function so conveniently produces. We present the kinetic theoryof gases fairly early on, since it provides a simple, well-deﬁned arena inwhich to practise simple concepts in probability distributions. This hasworked well in the course given in Oxford, but since kinetic theory is onlystudied at a later stage in courses in other places, we have designed thebook so that the kinetic theory chapters can be omitted without causingproblems; see Fig. 1.5 on page 10 for details. In addition, some parts ofthe book contain material that is much more advanced (often placed inboxes, or in the ﬁnal part of the book), and these can be skipped at ﬁrstreading.The book is arranged in a series of short, easily digestible chapters,each one introducing a new concept or illustrating an important application. Most people learn from examples, so plenty of worked examplesare given in order that the reader can gain familiarity with the conceptsas they are introduced. Exercises are provided at the end of each chapterto allow the students to gain practice in each area.In choosing which topics to include, and at what level, we have aimedfor a balance between pedagogy and rigour, providing a comprehensibleintroduction with suﬃcient details to satisfy more advanced readers. Wehave also tried to balance fundamental principles with practical applications. However, this book does not treat real engines in any engineering depth, nor does it venture into the deep waters of ergodic theory.Nevertheless, we hope that there is enough in this book for a thoroughgrounding in thermal physics and the recommended further reading givespointers for additional material. An important theme running throughthis book is the concept of information, and its connection with entropy.The black hole shown at the start of this preface, with its surface covered in ‘bits’ of information, is a helpful picture of the deep connectionbetween information, thermodynamics, radiation, and the Universe.The history of thermal physics is a fascinating one, and we have provided a selection of short biographical sketches of some of the key pioneers in thermal physics. To qualify for inclusion, the person had to

ixhave made a particularly important contribution or had a particularlyinteresting life – and be dead! Therefore one should not conclude fromthe list of people we have chosen that the subject of thermal physics isin any sense ﬁnished, it is just harder to write with the same perspectiveabout current work in this subject. The biographical sketches are necessarily brief, giving only a glimpse of the life-story, so the Bibliographyshould be consulted for a list of more comprehensive biographies. However, the sketches are designed to provide some light relief in the mainnarrative and demonstrate that science is a human endeavour.It is a great pleasure to record our gratitude to those who taught us thesubject while we were undergraduates in Cambridge, particularly OwenSaxton and Peter Scheuer, and to our friends in Oxford: we have beneﬁtted from many enlightening discussions with colleagues in the physicsdepartment, from the intelligent questioning of our Oxford students andfrom the stimulating environments provided by both Mansﬁeld Collegeand St John’s College. In the writing of this book, we have enjoyed thesteadfast encouragement of Sönke Adlung and his colleagues at OUP,and in particular Julie Harris’ black-belt LATEX support.A number of friends and colleagues in Oxford and elsewhere have beenkind enough to give their time and read drafts of chapters of this book;they have made numerous helpful comments, which have greatly improved the ﬁnal result: Fathallah Alouani Bibi, James Analytis, DavidAndrews, Arzhang Ardavan, Tony Beasley, Michael Bowler, Peter Duﬀy,Paul Goddard, Stephen Justham, Michael Mackey, Philipp Podsiadlowski, Linda Schmidtobreick, John Singleton and Katrien Steenbrugge.Particular thanks are due to Tom Lancaster, who twice read the entiremanuscript at early stages and made many constructive and imaginativesuggestions, and to Harvey Brown, whose insights were always stimulating and whose encouragement was always constant. To all these friends,our warmest thanks are due. Errors which we discover after going topress will be posted on the book’s website, which may be found at:http://users.ox.ac.uk/ sjb/ctpIt is our earnest hope that this book will make the study of thermalphysics enjoyable and fascinating and that we have managed to communicate something of the enthusiasm we feel for this subject. Moreover,understanding the concepts of thermal physics is vital for humanity’sfuture; the impending energy crisis and the potential consequences ofclimate change mandate creative, scientiﬁc, and technological innovations at the highest levels. This means that thermal physics is a ﬁeldthat some of tomorrow’s best minds need to master today.SJB & KMBOxfordJune 2006 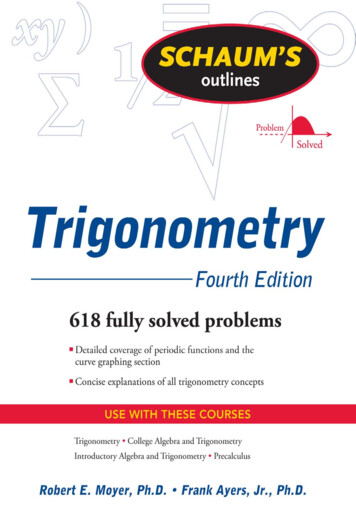 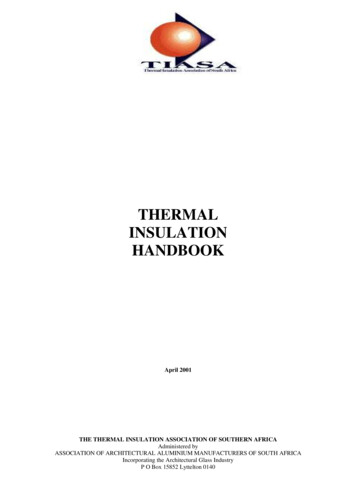 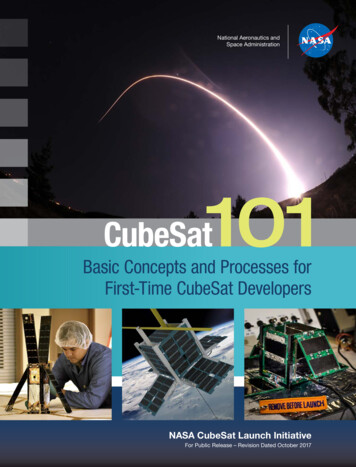 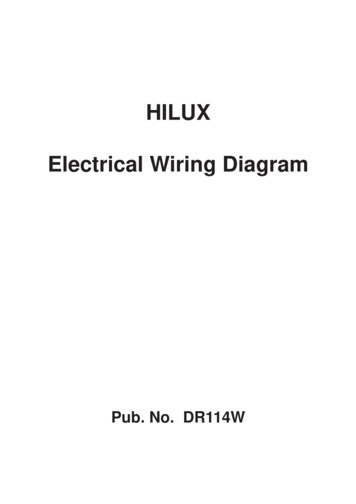 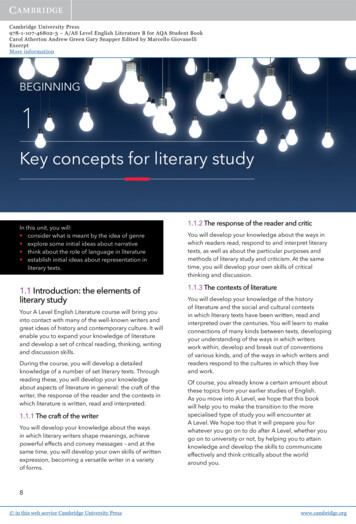 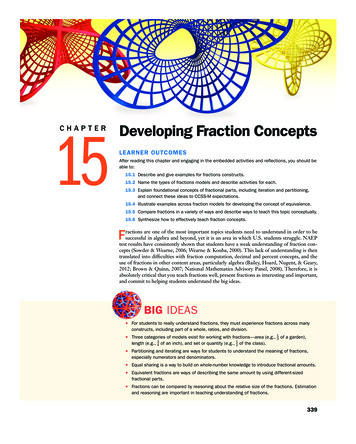 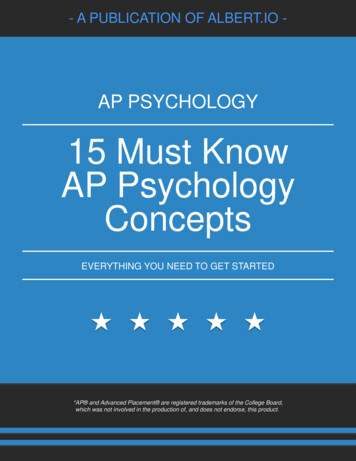 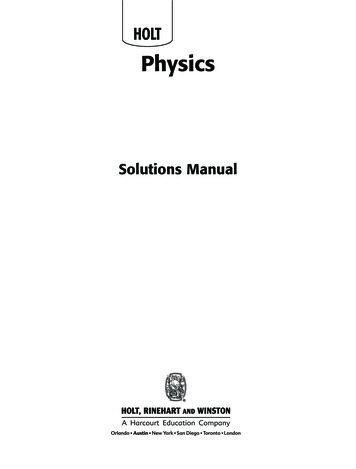 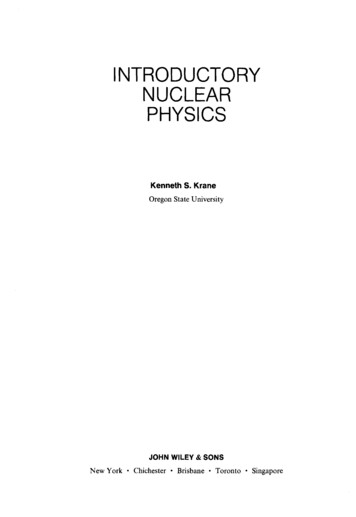 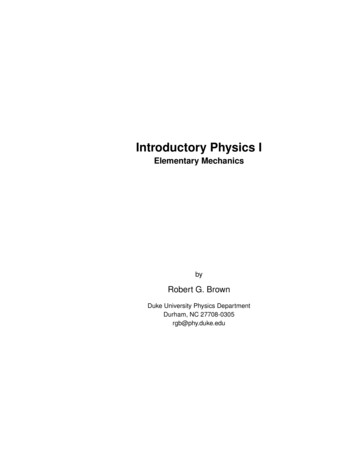 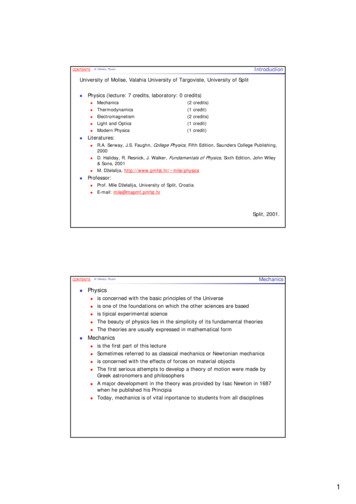 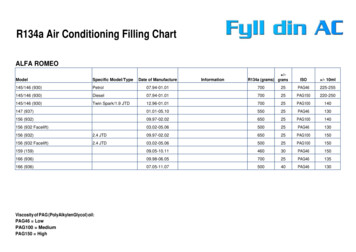 The Physics of Sound