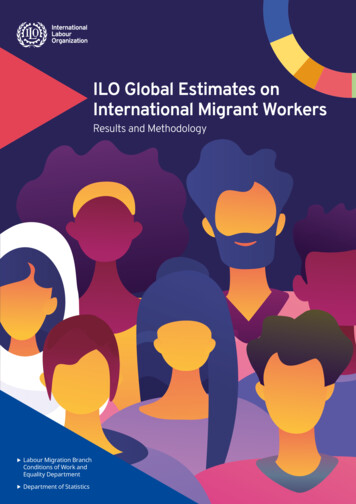 5XPrefaceInternational migrant workers constitute nearly 5 per cent of the global labour force and are an integralpart of the world economy. Labour migration not only benefits the migrant worker, but also thecommunities they become part of, as well as their origin countries. Yet, the gains of labour migrationcan be diminished when migration policies are not informed by an evidence-base and insufficientlylinked to employment policies. Harnessing the potential of labour migration toward development gainsrequires well-informed and effective policymaking, based on up to date and sound data.The UN 2030 Sustainable Development Agenda (UN 2015) recognizes migration as an important aspectof development policy, urging governments to “facilitate orderly, safe, regular and responsiblemigration and mobility of people, including through the implementation of planned and wellmanaged migration policies” (target 10.7) and to “protect labour rights and promote safe and secureworking environments for all workers, including migrant workers, in particular women migrants, andthose in precarious employment” (target 8.8). The 2020 Sustainable Development Goals Report (UN 2020)provides a timely set of data as this year both SDGs 8 and 10, among others, will be reviewed at theHigh-Level Political Forum on Sustainable Development in July 2021.Recognizing the importance of timely, reliable and comparable data and the need for internationalstandards on labour migration data, the ILO has developed Guidelines Concerning Statistics of InternationalLabour Migration that were adopted by the 20th International Conference of Labour Statisticians (ICLS)(ILO 2018a). With the adoption of the Global Compact for Safe, Orderly and Regular Migration (GCM) in 2018by the UN General Assembly (UN 2019), countries have committed to improved migration governance andcooperation to facilitate orderly migration. The ILO supports the capacity-building efforts of countriesin data collection and contributes to the regional and global knowledge building and dissemination oninternational labour migration statistics. To support this work, ILO has established and maintains theworld’s largest and most robust global labour migration database.This third edition of the ILO Global Estimates on International Migrant Workers: Results and Methodologypresents the most recent estimates on the stock of international migrant workers, disaggregated byage, sex, country-income group and region, and the estimation methodology. The periodic publicationof this report provides information on recent trends on labour migration and therefore, contributesto achieving the Sustainable Development Goals as well as supporting policymaking at the country,regional and global levels.Manuela TomeiDirector,ILO Conditions of Work and Equality Department(WORKQUALITY)Rafael Diez de MedinaDirector,ILO Department of Statistics

12X ILO Global Estimates on International Migrant Workers – Results and Methodology – Third editionAmong international migrant workers,99 million are men and 70 million arewomenWomen constitute 41.5 per cent and men58.5 per cent of migrant workers. The smallershare of women migrant workers can beexplained by their lower representation amonginternational migrants (47.9 per cent) on onehand, and their relatively lower labour marketparticipation rate as compared to men (59.8 percent vs. 77.5 per cent) on the other. Women facemore economic and non-economic obstacles asmigrant workers, and there is a higher likelihoodthat women migrate as accompanying familymembers for reasons other than to find work.They can experience gender discrimination inthe labour market and lack of social networksthat make it difficult to reconcile work and familylife in a foreign country. All of these are possiblefactors reducing women’s representation amongmigrant workers.X Global distribution of international migrantworkers by sex, 2019Northern, Southern and Western Europe havingabove 50.0 per cent female share among migrantworkers as compared to below 20.0 per cent inthe Arab States.International migrants have higherlabour force participation than nonmigrants but rates are decreasing forboth groupsOver time, while migrants have tended to havehigher labour force participation rates, the ratesfor both migrants and non-migrants have fallen.In 2013, migrant workers constituted 72.7 percent of migrants of working age but 70.0 per centin 2017 and 69.0 per cent in 2019.The decline in the labour force participation ofinternational migrants is likely to be generatedby fac tors that also af fec t non-migrantpopulations. The ILO projects that the generaldecline in participation rates observed since1990 will continue until at least 2030. Likelydrivers include demographic changes (e.g. agingpopulations in most high-income countries),technological change, labour market andimmigration policies. In the case of internationalmigrants, added factors may include labourmarket discrimination and barriers to obtainingemployment, insufficient language proficiencyand challenges related to the limited access torecognition of their skills and qualifications indestination countries.X Global labour force participation rates ofmigrants and non-migrants by sex, 2019Women migrant’s contribution to the femalelabour force in destination countries is higher(5.2 per cent) compared to that of migrant men(4.6 per cent) in the male labour force. Thishas to do with the significantly larger labourforce participation gap between migrant andnon-migrant women (13.1 percentage points)as compared to migrant and non-migrantmen (3.4 percentage points). It should also benoted that the global share of women amongmigrant workers masks significant differencesacross geographic regions, with regions such as

X Executive summaryThe large majority of internationalmigrant workers consists of prime-ageadults but the share of youth isincreasingPrime-age adults (aged 25– 64) constitute86.5 per cent of migrant workers. The sharesof youth (aged 15–24) and older workers (aged65 and over) among migrant workers are lowerat 10.0 per cent and 3.6 per cent, respectively. Itshould be noted that youth constitute 12.9 percent, prime-age adults 74.7 per cent, and olderworkers 12.4 per cent of the working age migrantpopulation.The share of youth among international migrantworkers has increased over time, from 8.3 percent in 2017 to 10.0 per cent in 2019. In contrast,the share of older workers (aged 65 plus) reducedfrom 5.2 per cent to 3.6 per cent over the sametime period, leaving the share of prime-ageadults constant. The heavy representation ofprime-age adults can be explained by this agegroup’s better ability to migrate to a foreigncountry (in terms of financial means and socialnetworks) and their higher potential gains thanyounger migrants with less years of experience,or older migrant s w i th les s remainingeconomically active years. The increase inyouth migration is likely to be the result of highyouth unemployment rates in many developingcountries and the phenomenon of the “youthbulge”.Most international migrant workers areconcentrated in services sectorSector figures show that 66.2 per cent of migrantworkers are in services, 26.7 per cent are inindustry and 7.1 per cent are in agriculture.However, substantial gender differences existwithin the sectors. In the case of women, 79.9 percent are in services, 14.2 per cent are in industryand 5.9 per cent in agriculture. Compared towomen, the distribution of men migrant workersbetween industry and services is relatively morebalanced, with 35.6 per cent of men employedin industry and 56.4 per cent in services. Theremaining 7.9 per cent of men migrant workersare in agriculture. A higher representation ofwomen migrant workers in services may, in part,be explained by a growing labour demand in thecare economy, including health and domesticwork. These sub-sectors have a predominantlyfemale labour force and rely heavily on womenmigrant workers. Men migrant workers aremore present in industry, finding work in themanufacturing and construction sub-sectors.X Global distribution of international migrantworkers by broad category of economicactivity, 2019X Global age composition of internationalmigrant workers, 2019A comparison of 2013 estimates to 2019estimates suggests dif ferent pat terns ofchange for men and women migrant workersby category of economic activity. In the caseof women, there has been a sharp drop inagriculture (from 11.1 per cent to 5.9 per cent)and a nearly commensurate rise in services(from 73.7 per cent to 79.9 per cent). In thecase of men, a decline is detected in agriculture(from 11.2 per cent to 7.9 per cent) and services13

X Executive summaryStates. Collectively, these three regions host60.6 per cent of migrant workers in 2019.In Northern, Southern and Western Europe,migrant workers make up 18.4 per cent of thelabour force. In North America, their shareincreases to 20.0 per cent. The highest shareis observed in the Arab States at 41.4 per cent,which is due to the relatively small populationsize of this subregion and the substantiallyhigher labour force participation of migrants ascompared to non-migrants.Within these three subregions, men migrantworkers are evenly distributed, but womenmigrant workers are more heavily concentratedin Nor thern America (24.9 per cent) andNor thern, Southern and Western Europe(29.4 per cent). Only 6.0 per cent of womenmigrant workers are in the Arab States, whichcould be partially attributed to the limitedemployment opportunities this region offersto them outside of the care economy (includingdomestic work).The importance of the top three regions interms of the number of international migrantworkers they host has not diminished over time.In 2013 and 2017, they were home to 60.2 percent and 60.8 per cent of migrant workers,respectively.X Distribution of international migrant workers by broad subregion, 201915

by the UN General Assembly (UN 2019), countries have committed to improved migration governance and cooperation to facilitate orderly migration. The ILO supports the capacity-building efforts of countries in data collection and contributes to the regional and global knowledge building and di