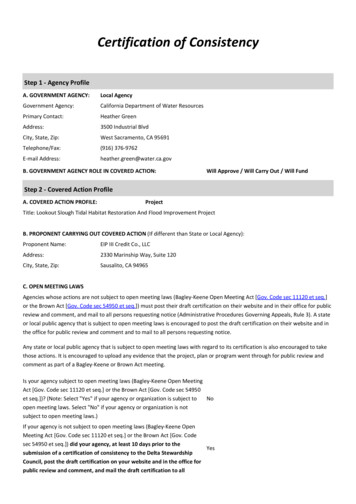 persons requesting notice?Any state or local public agency that is subject to open meeting laws with regard to its certification is also encouraged to takethose actions. It is encouraged to upload any evidence that the project, plan or program went through for public review andcomment as part of a Bagley-Keene or Brown Act meeting.Note: Any public comments received during this process must be included in the record submitted to the Council in case of anappeal.D. COVERED ACTION SUMMARY: (Project Description from approved CEQA document may be used here)The Proposed Project would restore within the Proposed Project Site approximately 3,165 acres of tidal wetland habitat,including habitat that is beneficial to Delta Smelt (Hypomesus transpacificus), and other fish and wildlife species. The ProposedProject was designed to provide multiple benefits, including improved flood conveyance. It would widen a portion of the YoloBypass to increase flood storage and conveyance, increase the resilience of levees, and reduce flood risk. Flood improvementelements as proposed are consistent with the Central Valley Flood Protection Plan, which calls for multi-benefit projects thatexpand the Yolo Bypass while incorporating ecosystem-enhancing features. To accomplish this, a new setback levee would beconstructed to the east of Duck Slough and south of Liberty Island Road. The Shag Slough Levee would be breached in ninelocations to provide tidal inundation to the areas within the Bowlsbey and Liberty Farms Properties. The Vogel Levee wouldalso be breached in two locations to provide tidal inundation to the areas within the Vogel Property. These breaches would alsoallow food for Delta Smelt that is produced within the new tidal wetland areas to be exported to the waterways of the CacheSlough Complex. The Shag Slough Levee would also be lowered at two locations to allow floodwaters from the Yolo Bypass tobe conveyed across and stored within the Proposed Project Site during flood events. The Cache/Hass Slough Levee wouldundergo a series of improvements, remain in place, and function as a training levee to maintain stage differences between theProposed Project Site and Cache and Hass Sloughs. Upon completion, the Proposed Project would protect approximately 3,400acres of open space in perpetuity, including approximately 3,165 acres of tidal marsh and subtidal habitats and 149 acres ofseasonal floodplain habitat in Solano County, California, and a very small portion of Yolo County, California. Restoring thesehabitats will increase food availability for Delta Smelt, Steelhead – Central Valley Distinct Population Segment (DPS)(Oncorhynchus mykiss), Chinook Salmon – Sacramento River winter-run Evolutionarily Significant Unit (ESU) (Oncorhynchustshawytscha), Chinook Salmon – Central Valley spring-run ESU, Green Sturgeon – Southern DPS (Acipenser medirostris), andLongfin Smelt (Spirinchus thaleichthys), known hereafter as “Target Protected Fish Species,” as well as other native fisheswithin the Project Site and the surrounding Cache Slough Complex. It will also provide rearing habitat for Delta Smelt andsalmonids, provide potential spawning habitat for Delta Smelt, and create habitat conditions for other aquatic and terrestrialwetland-dependent species, such as giant garter snake (Thamnophis gigas), that utilize the combination of Sacramento-SanJoaquin River Delta habitat interfaces (i.e., Delta-freshwater, aquatic-tidal, marsh-floodplain, seasonal wetland-lowlandgrassland). Additionally, the Proposed Project would create over 40,000 acre-feet of transitory flood storage at the Deltaconfluence. The Lookout Slough Tidal Habitat Restoration and Flood Improvement Project was developed to partially fulfill arequirement under the 2008 U.S. Fish and Wildlife Service (USFWS) Delta Smelt Biological Opinion on the CoordinatedOperations of the federal Central Valley Project and the State Water Project (2008 USFWS BiOp) to restore 8,000 acres of tidalhabitat. Restoration of tidal habitat also would provide access for salmonid rearing at the Project Site and therefore wasexpected to be credited toward a restoration requirement in the 2009 National Marine Fisheries Service (NMFS) BiologicalOpinion and Conference Opinion on the Long-Term Operation of the Central Valley Project and the State Water Project (2009NMFS BiOp). These restoration requirements in the 2008 USFWS BiOp and 2009 NMFS BiOp were carried forward as baselineconditions in the USFWS Biological Opinion for the Reinitiation of Consultation on the Coordinated Operations of the CentralValley Project and the State Water Project (2019 USFWS BiOp) and the NMFS Biological Opinion on Long Term Operation of theCentral Valley Project and the State Water Project (2019 NMFS BiOp), which are the currently effective biological opinionsgoverning coordinated operations of the Central Valley Project and State Water Project. The 8,000-acre tidal restorationrequirement also is a condition (Condition 9.1.1) of the Incidental Take Permit for Long-Term Operation of the State WaterProject in the Sacramento-San Joaquin Delta (2081-2019-066-00) (2020 LTO ITP), issued by the California Department of Fishand Wildlife on March 31, 2020. The 2020 LTO ITP is DWR’s California Endangered Species Act authorization to carry outongoing State Water Project operations. The following names/locations in this project description describe specific areas, aswell as levees and sloughs, within and adjacent to the Proposed Project Site: Bowlsbey Property – Approximate 1,644-acre

would be adequate to serve the Proposed Project’s water needs, includingduring dry and multiple dry years. Following completion of construction, theProposed Project area would consist of native ecosystem which would notrequire application of water and would be resilient to changes inprecipitation. The tidal marsh plain would be constructed at elevations whichwould facilitate regular inundation by tidal waters, and the proposed tidalchannel system would naturally convey water throughout the site.Therefore, after the Proposed Project’s construction, on-site Delta waterswould be sufficient for the designed habitat functions. Furthermore, theProposed Project would have minimal, if any, impact on water availability orwater quality for nearby development. As further detailed in Attachment 2 –Draft EIR, Chapter IV.G, Hydrology and Water Quality, Attachment 3 - FinalEIR, Chapter 2, IV.G., Attachment 4 – Final EIR, Appendix X - ResourceManagement Associates Lookout Slough Tidal Habitat Restoration and FloodImprovement Project Modeling, and Master Response #1 in Attachment 5 –Final EIR, Chapter 3 Response to Comments, hydrodynamic and water qualitymodeling for the Proposed Project found that changes to the area’s floodregime and tidal prism were unlikely to affect diversion use, and would havelittle effect on water quality or availability for nearby properties and otheruses. For agricultural operations and municipal water facilities’ use, includingRD 2068’s agricultural diversion, the State Water Project’s Barker SloughPumping Plant, the City of Vallejo’s Cache Slough Pumping Plant, and privateagricultural diversions, RMA modeling results showed that the ProposedProject is predicted to cause both decreases and increases in salinity andbromide concentrations (using electrical conductivity [EC] as a surrogate forsalinity) both seasonally and spatially. Predicted EC was converted tobromide using numerical relationships between EC and bromideconcentration. For additional information see response to ER P1. The salinityanalysis includes reference to background concentrations and applicablewater quality objectives. The standards for salinity in the Delta are set by D1641 and no standards are in effect for bromide, although it has beenrecognized as a constituent of concern warranting additional study andevaluation. RMA modeling results did not indicate any instance of noncompliance with D-1641 standards and no violations of D-1641 chloridestandards are identified for any of the locations modeled, including theContra Costa Water District (CCWD) intakes. The Proposed Project is notpredicted to cause non-compliance or make non-compliance with the D-1641salinity standard more likely for agricultural, municipal, or fish and wildlifebeneficial uses. Thus, the Proposed Project would not violate any waterquality standards or waste discharge requirements or otherwise substantiallydegrade surface or groundwater quality. Irrigation and agriculture-relatedinfrastructure are among the improvements to be funded to offset theProposed Project’s impacts to farmland, discussed in detail in Attachment 6 –Draft EIR, Chapter IV.B, Agriculture and Forestry, Attachment 3 – Final EIR,Chapter 2, IV.B., and Master Response #2 in Attachment 5 – Final EIR,Chapter 3 Response to Comments These improvements include off-siteenhancements to the adjacent Zanetti property, where irrigation capabilitieswould be augmented on 320 acres and new irrigation infrastructure installedon 440 acres currently not irrigated. The additional demand for irrigationwater resulting from these off-site improvements would depend on anumber of factors and is difficult to estimate at this time. However, DWRexpects the new irrigation water use would be lower than the amount used

G P1(b)(4)/Cal. Code Regs., tit. 23, § 5002, subd. (b)(4) provides that an ecosystem restoration or water management coveredaction must include adequate provisions, appropriate to its scope, to assure continued implementation of adaptivemanagement. For more information, see Appendix 1B, which is referenced in this regulatory policy. Note that this requirementmay be satisfied through both of the following:(A) An adaptive management plan that describes the approach to be taken consistent with the adaptive managementframework in Appendix 1B; and(B) Documentation of access to adequate resources and delineated authority by the entity responsible for the implementationof the proposed adaptive management process.Is the covered action consistent with this portion of the regulatory policy?YesAnswer Justification:The Proposed Project includes an adaptive management and monitoring plan(AMMP) that is consistent with the Delta Plan Appendix 1B adaptivemanagement framework, included in full as Attachment 8. DWR isresponsible for ensuring management and monitoring activities arecompleted, maintaining records, reporting, and coordinating and approvingany research activities proposed on the Project Site. Various groups withinCDFW and DWR, as well as qualified consultants are responsible forspecialized monitoring as described in the AMMP. For a detailed listincluding adaptive management tasks and responsible parties, please seeTable 11. Parties Responsible for Specific Monitoring and AdaptiveManagement in the AMMP. Long-term management activities will be fundedthrough DWR’s State Water Project operations and maintenance budget forperpetual operation and maintenance of the Proposed Project. ATT 8 DraftLookout Slough AMMP.pdfDELTA PLAN CHAPTER 3WR P1 / Cal. Code Regs., tit. 23, § 5003 - Reduce Reliance on the Delta through Improved Regional Water Self-RelianceIs the covered action consistent with this portion of the regulatory policy?N/AAnswer Justification:This policy is not applicable because water suppliers would not receive wateras a result of the Proposed Project and DWR is not a water supplier.WR P2 / Cal. Code Regs., tit. 23, § 5004 - Transparency in Water ContractingIs the covered action consistent with this portion of the regulatory policy?N/AAnswer Justification:The Proposed Project does not involve water supply or water transfercontracts from the State Water Project or Central Valley Project.DELTA PLAN CHAPTER 4Cal. Code Regs., tit. 23, § 5002, subd. (c) - Conservation MeasureCal. Code Regs., tit. 23, § 5002, subd. (c) provides that a conservation measure proposed to be implemented pursuant to anatural community conservation plan or a habitat conservation plan that was: (1) Developed by a local government in theDelta; and (2) Approved and permitted by the California Department of Fish and Wildlife prior to May 16, 2013 is deemed to beconsistent with the regulatory policies listed under Delta Plan Chapter 4 of this Form (i.e. sections 5005 through 5009) if thecertification of consistency filed with regard to the conservation measure includes a statement confirming the nature of theconservation measure from the California Department of Fish and Wildlife.

Is the covered action consistent with this portion of the regulatory policy?N/AAnswer Justification:The Proposed Project is not proposed pursuant t

Self Awareness, Cultural Awareness Consistency and .

Getting Ready for the NP Certification Exam

Sterile Single Use Instruments and Accessories for .

Providing clarity and consistency for the protection