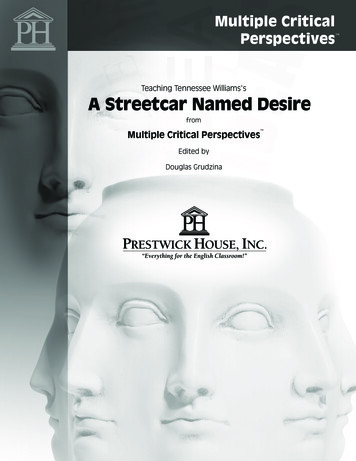 Multiple CriticalPerspectivesA Streetcar Named DesireOther titles in the Multiple Critical Perspective series include:A convenient order form is located in the back of this book.1 984Animal FarmAnthemAntigone Awakening, TheBeowulf Brave New WorldCatcher in the Rye, TheComedy of Errors, The Crucible, TheCry, the Beloved CountryDeath of a SalesmanDoll’s House, AEthan FromeFahrenhiet 451FrankensteinGrapes of Wrath, The Great Expectations Great Gatsby, The HamletHeart of DarknessHouse on Mango Street, TheI Know Why the Caged Bird SingsImportance of Being Earnest, TheInvisible Man (Ellison)Jane EyreJoy Luck Club, TheJungle, TheKing LearLesson Before Dying, ALife of PiLord of the Flies MacbethMedeaMerchant of Venice, The Metamorphosis, The Midsummer Night’s Dream, A Much Ado About Nothing Oedipus Rex Of Mice and Men Old Man and the Sea, TheOur TownPicture of Dorian Gray, ThePride and PrejudiceRaisin in the Sun, ARichard IIIRomeo and JulietScarlet Letter, TheSeparate Peace, A Siddhartha Slaughterhouse-FiveStreetcar Named Desire, ATale of Two Cities, ATaming of the Shrew, TheTempest, The Things Fall ApartThings They Carried, TheTo Kill a MockingbirdTranscendentalism Twelfth Night Wuthering HeightsP.O. Box 658, Clayton, DE 19938www.prestwickhouse.com 800.932.4593ISBN 978-1-935464-26-6Item No. 305044Copyright 2009 Prestwick House, Inc. All rights reserved.No portion may be reproduced without permission in writing from the publisher.2Pr e s t w i c kHo u s e,In c.

A Streetcar Named DesireMultiple CriticalPerspectivesA Message to theTeacher of LiteratureOpen your students’ eyes and mindswith this new, exciting approach to teaching literature.In this guide, you will find reproducible activities, as wellas clear and concise explanations of three contemporarycritical perspectives—feel free to reproduce as much, oras little, of the material for your students’ notebooks. Youwill also find specific suggestions to help you examinethis familiar title in new and exciting ways. Your studentswill seize the opportunity to discuss, present orally, andwrite about their new insights.What you will not find is an answer key. To the feminist, the feminist approach is the correct approach, justas the Freudian will hold to the Freudian. Truly, the pointof this guide is to examine, question, and consider, notmerely arrive at “right” answers.You will also find this to be a versatile guide. Use it inconcert with our Teaching Unit or our Advanced Placement Teaching Unit. Use it along with our Response Journal, or use it as your entire study of this title. Howeveryou choose to use it, we are confident you’ll be thrilledwith the new life you find in an old title, as well as inyour students.Pr e s t w i c kHo u s e,In c.3

Multiple CriticalPerspectivesA Streetcar Named DesireGeneral Introduction to the WorkIntroduction to A Streetcar Named DesireOpening onDec. 3, 1947, A Streetcar Named Desire secured Tennessee Williams’s place in the pan-theon of American playwrights. With its raw depiction of alcoholism, sexuality—including anoffstage rape—and explosive human emotion, the play shocked and thrilled critics and audiences alike.The drama won for Williams the first of his two Pulitzer Prizes.Set in New Orleans, where Williams lived for a time, A Streetcar Named Desire tells the story of the colossal and ultimately disastrous culture clash between Blanche DuBois, a fragile aging Southern belle, proneto drink and mendacity, and Stanley Kowalski, her brutally masculine, blue-collar brother-in-law. StellaKowalski, sister to Blanche and wife to Stanley, forms the third point of this human Bermuda triangle.Elia Kazan, an award-winner producer and director of both films and stage play, and a successfulplaywright and novelist, directed the Broadway production of A Streetcar Named Desire, as well as the1951 film version. The drama introduced audiences to the raw power of a 23-year-old actor namedMarlon Brando and starred a young Jessica Tandy in the stage production.In later years, Williams confirmed that when he wrote the play, he intended for Blanche to be themore sympathetic character, a relic of the South’s past, destroyed by the barbaric Stanley. However, audiences thrilled to Brando, whose performance overpowered his costars. According to an Internet MovieDatabase biography of Brando, Kazan feared the audience was becoming too enamored of Brando andsuggested toning down the part, lest the actor’s power undermine the audience’s sympathy for Blanche.Williams, who also was enthralled with Brando, was not worried and permitted the actor to exercise hisfull range of power.As with many of Williams’s works, A Streetcar Named Desire contains overt and subtle autobiographical elements. Williams, who was openly homosexual, struggled for much of his life with alcoholism anddepression, much like his protagonist, Blanche.The movie garnered twelve Academy Award nominations and won four Oscars for best actress (VivianLeigh), best supporting actress (Kim Hunter), best supporting actor (Karl Malden) and best art direction.Ironically, Brando, who remains the actor most identified with Streetcar, and director Kazan, the personmost responsible for bringing Williams’s work to life, were nominated for Oscars but did not win.6Pr e s t w i c kHo u s e,In c.

A Streetcar Named DesireMultiple CriticalPerspectivesGenreA Streetcar Named Desire is a one-act play with eleven scenes. The work is a tragedy, a serious dramain which the problems and flaws of the central characters lead to an unhappy or catastrophic ending. Theoriginal Greek word tragoidia roughly means “the song of the goat,” from tragos (goat) and oide (ode orsong). The structure of the classic dramatic tragedy, as outlined by the Greek philosopher Aristotle, isunified by place, time, and plot. In other words, the story is set in a single location, within a discrete timeperiod, and is built around a series of actions that pertain to a single, central plot. In a classic tragedy,the story is told in a straightforward, chronological fashion, as the rising action builds toward a crisisand then the climax. The falling action is often brief, resulting in a swift denouement (outcome or finalsolution.) In the case of a tragedy, the unhappy resolution is known as the catastrophe.A Streetcar Named Desire fits the standard parameters of a dramatic tragedy. The Kowalski apartment,where all the onstage action occurs, provides the unity of place. The story develops chronologically overthe course of a few months, creating the unity of time. Facts about Blanche’s past are revealed throughdialogue, rather than flashbacks, and serve to develop and explain the forward-moving plot. There isonly one plot—the conflict between Blanche and Stanley. Stella and Mitch serve to complicate andenhance that plot, but they do not have storylines of their own. Likewise, the minor characters, Euniceand Steve Hubbell, are not central to any subplot; their squabbles merely echo the front-and-center fightsbetween Stanley and Stella.In a classic tragedy, the tragic hero meets with an unhappy end—usually his or her utter destruction,brought about by a combination of outside forces and his or her own fatal flaws. In Streetcar, Blanche isthis tragic hero. Her past is a mixed bag. She has apparently sacrificed some part of her own happiness inorder to tend to her dying relatives in Laurel, Mississippi, and witnessed the loss of the family home—aloss that she was powerless to stop. At the same time, she herself callously and thoughtlessly destroyed asensitive soul and has spent her life since that defining event engaging in morally questionable behaviorwith assorted men, including a student.As the play unfolds, she desires to be Stella’s rescuer, but ultimately is unable to accomplish anything. The most action she takes toward extricating her sister and herself from Stanley and his abuse isto pretend to telephone and write to a man who is little more than a figment of her imagination.Likewise, her attempt to secure her own happiness is essentially neurotic, deceitful, and manipulative. When Stanley learns the truth and uses it against her, she is undone by her own weaknesses (socialpretension, alcoholism, mendacity, and a fixation with the past). Stanley is the antagonist who pursuesher, exposes her weaknesses and secrets, and ultimately destroys her.Tennessee Williams wrote dozens of short one-act plays, including his first play, “Beauty Is theWord,” written in 1930 while he was in college. He seemed drawn to the unity of the form, as wellas to the tautness of the structure. Drama critics have theorized, also, that the one-act structure madeWilliams’s work more adaptable to film.Pr e s t w i c kHo u s e,In c.7

Multiple CriticalPerspectivesA Streetcar Named DesireAs a one-act play, A Streetcar Named Desire differs somewhat in structure from the more traditionaltwo- or three-act dramatic structures. The playwright did not designate an intermission break within theoriginal script. However, most theatrical companies do include an intermission, selecting whatever theyconsider to be a dramatic high point to interrupt the flow of the action into two “acts.”In a typical three-act play, each act ends on a significant plot point. In A Streetcar Named Desire, mostcritics agree that these plot points are found in Scene Three and Scene Eight. Collectively, the plot pointsbuild toward the climax in Scene Ten. Each scene can be studied as a contained unit, as the action risestoward the plot points and ultimate climax. Most of the scenes also end on a note of tension or suspense,usually reinforced by the musical score. (The Blue Piano music ends seven of the eleven scenes, whilethe Varsouviana Polka closes two.)8Pr e s t w i c kHo u s e,In c.

A Streetcar Named DesireMultiple CriticalPerspectivesPlot SummaryScene One begins on what Williams describes as “the first dark of an early evening in May.” Thesky is a “peculiarly tender blue, almost turquoise.” The setting is Elysian Fields Avenue in New Orleans,a poor neighborhood, but with a “raffish charm.” The main set is a two-story house with steps leadingfrom the street to both apartments. Screens, projections, and lighting effects will allow walls to app

playwright and novelist, directed the Broadway production of A Streetcar Named Desire, as well as the 1951 film version. The drama introduced audiences to the raw power of a 23-year-old actor named Marlon Brando and starred a young Jessica Tandy in the stage production. In later years, Williams confirmed that when he wrote the play, he intended for Blanche to be the more sympathetic character .File Size: 2MBPage Count: 80