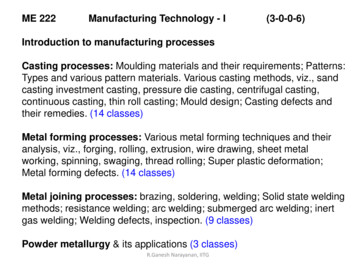 Metal casting processes Casting is one of the oldest manufacturing process. It is the first stepin making most of the products. Steps:- Making mould cavity- Material is first liquefied by properly heating it in a suitable furnace.- Liquid is poured into a prepared mould cavity- allowed to solidify- product is taken out of the mould cavity, trimmed and made to shapeWe should concentrate on the following for successful castingoperation:(i)Preparation of moulds of patterns(ii)Melting and pouring of the liquefied metal(iii)Solidification and further cooling to room temperature(iv)Defects and inspectionR.Ganesh Narayanan, IITG

Advantages Molten material can flow into very small sections so that intricate shapes canbe made by this process. As a result, many other operations, such asmachining, forging, and welding, can be minimized. Possible to cast practically any material: ferrous or non-ferrous. The necessary tools required for casting moulds are very simple andinexpensive. As a result, for production of a small lot, it is the ideal process. There are certain parts (like turbine blades) made from metals and alloys thatcan only be processed this way. Turbine blades: Fully casting last machining. Size and weight of the product is not a limitation for the casting process.R.GaneshIITG processes – I, Pradeep Kumar et al.NPTEL courseonNarayanan,Manufacturing

Important casting termsFlask: A metal or wood frame, without fixed top orbottom, in which the mould is formed. Dependingupon the position of the flask in the mouldingstructure, it is referred to by various names such asdrag – lower moulding flask, cope – upper mouldingflask, cheek – intermediate moulding flask used inthree piece moulding.Pattern: It is the replica of the final object to be made.The mould cavity is made with the help of pattern.Parting line: This is the dividing line between the twomoulding flasks that makes up the mould.Moulding sand: Sand, which binds strongly withoutlosing its permeability to air or gases. It is a mixture ofsilica sand, clay, and moisture in appropriateproportions.Facing sand: The small amount of carbonaceousmaterial sprinkled on the inner surface of the mouldcavity to give a better surface finish to the castings.J SNarayanan,Campbell,IITGPrinciples Of Manufacturing Materials And ProcessesR.GaneshNPTEL course on Manufacturing processes – I, Pradeep Kumar et al.

Steps in making sand castingsThe six basic steps in making sand castings are,(i) Pattern making, (ii) Core making, (iii) Moulding, (iv) Melting andpouring, (v) CleaningPattern making- Pattern: Replica of the part to be cast and is used to prepare themould cavity. It is the physical model of the casting used to make themould. Made of either wood or metal.-The mould is made by packing some readily formed aggregatematerial, such as moulding sand, surrounding the pattern. When thepattern is withdrawn, its imprint provides the mould cavity. This cavityis filled with metal to become the casting.- If the casting is to be hollow, additional patterns called ‘cores’, areused to form these cavities.R.Ganesh Narayanan, IITG

Core makingCores are placed into a mould cavity to form the interior surfaces ofcastings. Thus the void space is filled with molten metal and eventuallybecomes the casting.MouldingMoulding is nothing but the mould preparation activities for receiving moltenmetal.Moulding usually involves: (i) preparing the consolidated sand mould arounda pattern held within a supporting metal frame, (ii) removing the pattern toleave the mould cavity with cores.Mould cavity is the primary cavity.The mould cavity contains the liquid metal and it acts as a negative of thedesired product.The mould also contains secondary cavities for pouring and channelingthe liquid material in to the primary cavity and will act a reservoir, ifrequired.R.Ganesh Narayanan, IITG

Melting and PouringThe preparation of molten metal for casting is referred to simply asmelting. The molten metal is transferred to the pouring area wherethe moulds are filled.CleaningCleaning involves removal of sand, scale, and excess metal fromthe casting. Burned-on sand and scale are removed to improved thesurface appearance of the casting. Excess metal, in the form of fins,wires, parting line fins, and gates, is removed. Inspection of thecasting for defects and general quality is performed.R.Ganesh Narayanan, IITG

Making a simple sand mould1) The drag flask is placed on the board2) Dry facing sand is sprinkled over the board3) Drag half of the pattern is located on the mouldboard. Dry facing sand will provide a non-stickylayer.4) Molding sand is then poured in to cover thepattern with the fingers and then the drag isfilled completely5) Sand is then tightly packed in the drag bymeans of hand rammers. Peen hammers (usedfirst close to drag pattern) and butt hammers(used for surface ramming) are used.6) The ramming must be proper i.e. it must neither be too hard or soft. Too soft rammingwill generate weak mould and imprint of the pattern will not be good. Too hardramming will not allow gases/air to escape and hence bubbles are created in castingresulting in defects called ‘blows’. Moreover, the making of runners and gates will bedifficult.7) After the ramming is finished, the excess sand is leveled/removed with a straight barknown as strike rod.R.Ganesh Narayanan, IITG

8) Vent holes are made in the drag to the fulldepth of the flask as well as to the patternto facilitate the removal of gases duringpouring and solidification. Done by vent rod.9) The finished drag flask is now madeupside down exposing the pattern.10) Cope half of the pattern is then placedon the drag pattern using locating pins. Thecope flask is also located with the help ofpins. The dry parting sand is sprinkled allover the drag surface and on the pattern.11) A sprue pin for making the spruepassage is located at some distance fromthe pattern edge. Riser pin is placed at anappropriate place.12) Filling, ramming and venting of the copeis donethe samemanner.R.GaneshinNarayanan,IITG

Pour basin13) The sprue and riser are removed and a pouring basin is made atthe top to pour the liquid metal.14) Pattern from the cope and drag is removed.15) Runners and gates are made by cutting the parting surface with agate cutter. A gate cutter is a piece of sheet metal bent to the desiredradius.16) The core for making a central hole is now placed into the mouldcavity in the drag. Rests in core prints.17) Mould is now assembled and ready for pouring.R.Ganesh Narayanan, IITG

PatternThe pattern and the part to be made are not same. They differ in thefollowing aspects.1.A pattern is always made larger than the final part to be made. Theexcess dimension is known as Pattern allowance.Pattern allowance shrinkage allowance, machining allowance2.Shrinkage allowance: will take care of contractions of a castingwhich occurs as the metal cools to room temperature.Liquid Shrinkage: Reduction in volume when the metal changesfrom liquid state to solid state. Riser which feed the liquid metal to thecasting is provided in the mould to compensate for this.Solid Shrinkage: Reduction in volume caused when metal loosestemperature in solid state. Shrinkage allowance is provided on thepatterns to account for this.Shrink rule is used to compensate solid shrinkage depending on thematerial contraction rate. R.Ganesh Narayanan, IITG

2. The shrinkage allowance depends on the coefficient ofthermal expansion of the material (α). A simple relationindicates that higher the value of α, more is the shrinkageallowance.3. For a dimension ‘l’, shrinkage allowance is αl (θf –θ0). Hereθf is the freezing temperature and θ0 is the roomtemperature.4. Machining allowance: will take care of the extra materialthat will be removed to obtain a finished product. In this therough surface in the cast product will be removed. Themachining allowance depends on the size of the casting,material properties, material distortion, finishing accuracyand machining method.R.Ganesh Narayanan, IITGA Ghosh and A K Mallik, Manufacturing Science

The casting shown is to be made in CI using a wooden pattern. Assumingonly machining allowance, calculate the dimension of the pattern. Alldimensions are in InchesMetalDimension

Learning from errors: A model of individual processes