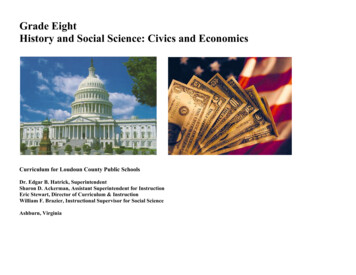 This curriculum document for Social Science is organized to help teachers plan and carry out their instruction conceptually, so thatstudents can see patterns and connections among and between ideas and points of information. In this document, each unit’s learningoutcomes or objectives are listed first, followed by a conceptual mind map connecting the content. Following the mind map in each unit isa more linear and traditional textual outline with references to points of content that students must learn in Civics and Economics. Eachsection of the unit outline is framed by important conceptual questions that serve as a foundation for the teaching and learning of thatsection. All conceptual questions appear in italics.There are four units in the curriculum. Since the foundations of the units are conceptual, they take in and call for the study of more thanjust the Virginia SOLs for Civics and Economics. SOL connections are listed in red on the “Objectives” page, and appear also in thebranches of each unit’s mind map. This means that when teachers focus on the objectives, and the concepts organized in the mind maps,they will include instruction in these particular SOLs in addition to the more complete concepts described and indicated. It does not meanthat instruction in only those particular SOLs listed will adequately prepare students to understand the relevant concepts, ideas, orregions required by our curriculum.For this course, Unit I is meant to last approximately 8 weeks so that students get a solid footing in fundamentals, and devote sufficientand opportune time to the election process. The foundation for Service Learning projects should be laid here, but it is perfectlyacceptable, and expected, to have Service Learning activities carry on through other units during the remainder of the year. Unit II, onthe sovereignty of the people, is meant to last 7 weeks. Unit III is meant to last 9 weeks and should include activities that, for example, askstudents to replicate “check and balance” activities. Finally, Unit IV is meant to last 9 weeks and focus on Economics, and the US in theworld economy. Within each unit, recommendations are made for teachers to focus on particular academic skills.We hope teachers find that the concepts contained and explained in this document serve as a productive mental framework for studentsand for themselves. This instructional layout and approach offers cognitive structures that are essential to the solid comprehension of ourcurriculum content.

Grade 8 Civics and Economics Unit I: The Role of a Citizen in the USSOLs CE.3a,c,d,e; CE.4a-g; CE.5a-gAt the end of this unit, students will be able to:1. Describe the legal requirements for becoming a citizen of the United States. (Includes: CE.3a,d; CE.4d))2. Describe the human characteristics of a citizen who works to help determine the “public good,” and give examples of each characteristic. (Includes:CE.3e; CE.4a,b,c,e,f)3. List and describe the behaviors which help make a citizen a responsible decision-maker. Includes: CE.3d; CE.4f)4. Explain the role of service and civic involvement in our communities by participating in BOTH a Service Learning project and a simulated electionprocess. (Includes: CE.4g; CE.5g)5. Explain how elections work at three levels of American government—including the role of citizens, parties, interest groups, money, and the media.(Includes: CE.5a,b,c,d,e,g)6. Explain how citizens, when organized, can influence a national election for president, but do not directly choose the president. (Includes: CE.5f)Suggested skills to emphasize in this unit: SS1-Construct and evaluate ; SS2-Use reference sources ; SS3-Identify and analyze viewpoint ; SS6Form and defend positions ; SS8-Recognize.different points of view; SS10-Understand cause-effect ; CES1-Analyze political cartoons ; CES2Identify specific social ; CES3-Analyze current events ; CS1-Review information ; CS2-Distinguish between relevant and irrelevant

UNIT I--CITIZENSHIP: WHAT IS MY ROLE IN A DEMOCRACY?

SOLs and Skills Forming the Content of this Unit:CE.3The student will demonstrate knowledge of citizenship and the rights, duties, and responsibilities of citizens bya) describing the processes by which an individual becomes a citizen of the United States;The Fourteenth Amendment to the Constitution of the United States of America defines citizenship as follows: “All persons born or naturalized in the United States, andsubject to the jurisdiction thereof, are citizens of the United States and the state wherein they reside.”Means of obtaining citizenship By birth By naturalizationImmigration and naturalization, particularly in the twentieth century, have led to an increasingly diverse society.To become a citizen through naturalization, a person must demonstrate knowledge of American history and principles and the ability to read, speak, and write words inordinary usage in the English language.c) describing the duties of citizenship, including obeying the laws, paying taxes, defending the nation, and serving in court;Duties of citizens Obey laws Pay taxes Serve in the armed forces, if called Serve on a jury or as a witness in court, when summonedCitizens who choose not to fulfill these civic duties face legal consequences.d) examining the responsibilities of citizenship, including registering and voting, communicating with government officials, participating in politicalcampaigns, keeping informed about current issues, and respecting differing opinions in a diverse society;Civic responsibilities are fulfilled by choice; they are voluntary.Responsibilities of citizens Register and vote Hold elective office Communicate with government officials to influence government actions Serve in voluntary, appointed government positions Participate in political campaigns. Keep informed regarding current issues Respect others’ right to an equal voice in governmente) evaluating how civic and social duties address community needs and serve the public good.Ways for citizens to participate in community service Volunteer to support democratic institutions (e.g., League of Women Voters). Express concern about the welfare of the community as a whole (e.g., as related to environment, public health and safety, education). Help to make the community a good place to work and live (e.g., by becoming involved with public service organizations, tutoring, volunteering in nursing homes).

CE.4The student will demonstrate knowledge of personal character traits that facilitate thoughtful and effective participation in civic life bya) practicing trustworthiness and honesty;b) practicing courtesy and respect for the rights of others;c) practicing responsibility, accountability, and self-reliance;d) practicing respect for the law;e) practicing patriotism;f) practicing decision making;g) practicing service to the school and/or local community.Effective participation in civic life can include formulating questions analyzing information from a variety of sources expressing a position devising and implementing a plan practicing thoughtful decision making in personal, financial, and civic matters (e.g., voting, civic issues).CE.5The student will demonstrate knowledge of the political process at the local, state, and national levels of government bya) describing the functions of political parties;Functions of political parties Recruiting and nominating candidates Educating the electorate about campaign issues Helping candidates win elections Monitoring actions of officeholdersb) comparing the similarities and differences of political parties;Similarities between parties Organize to win elections Influence public policies Reflect both liberal and conservative views Define themselves in a way that wins majority support by appealing to the political centerDifferences between parties Stated in party platforms and reflected in campaigningThird parties Introduce new ideas and/or press for a particular issue Often revolve around a political personality (e.g., Theodore Roosevelt)c) analyzing campaigns for elective office, with emphasis on the role of the media;Strategies for evaluating campaign speeches, literature, and advertisements for accuracy Separating fact from opinion

Detecting bias Evaluating sources Identifying propagandaMass media roles in elections Identifying candidates Emphasizing selected issues Writing editorials, creating political cartoons, publishing op-ed pieces Broadcasting different points of viewd) examining the role of campaign contributions and costs;Rising campaign costs require candidates to conduct extensive fund-raising activities limit opportunities to run for public office give an advantage to wealthy individuals who run for office encourage the development of political action committees (PACs) give issue-oriented special interest groups increased influence.Campaign finance reform Rising campaign costs have led to efforts to reform campaign finance laws. Limits have been placed on the amount individuals may contribute to political candidates and campaigns.e) describing voter registration and participation;Only citizens who register may participate in primary and general elections.Qualifications to register to vote in Virginia Citizen of the United States Resident of Virginia and precinct At least 18 years of age by day of general electionHow to register to vote in Virginia In person at the registrar’s office, at the Division of Motor Vehicles, or at other designated sites By mail-in applicationVoter registration is closed 22 days before elections.Factors in predicting which citizens will vote Education Age IncomeReasons why citizens fail to vote Lack of interest Failure to register

The percentage of voters who participate in presidential elections is usually greater than the percentage of voters who participate in state and local elections.Every vote is important.f) describing the role of the Electoral College in the election of the president and vice president;Electoral College process A slate of electors for each state is chosen by popular vote. Most states have a winner-take-all system. The electors meet to vote for president and vice president.The winner-take-all system leads to the targeting of densely populated states for campaigning, although candidates must pay attention to less populated states whose electoralvotes may make the difference in tight elections.The number of electors of each state is based on the size of the state’s Congressional representation, which is based on the state’s population.The requirement for a majority vote to win in the Electoral College favors a two-party system.g) participating in simulated local, state, and/or national elections.Student participation in the democratic process can include participating in campaigns participating in classroom and online simulations.

Grade 8 Civics and Economics Unit I: The Role of a Citizen in the US SOLs CE.3a,c,d,e; CE.4a-g; CE.5a-g At the end of this unit, students will be able to: 1. Describe the legal requirements for becoming a citizen of the United States. (Includes: CE.3a,d; CE.4d)) 2. Describe the human characteristics of a citizen who works to help determine the “public good,” and give examples of each .