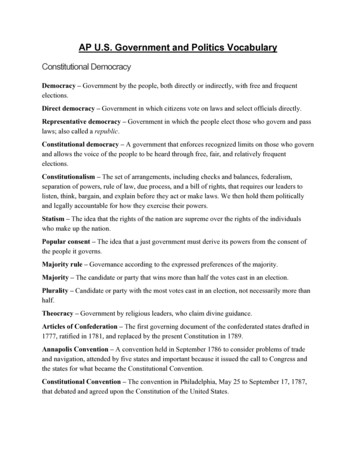 AP U.S. Government and Politics VocabularyConstitutional DemocracyDemocracy – Government by the people, both directly or indirectly, with free and frequentelections.Direct democracy – Government in which citizens vote on laws and select officials directly.Representative democracy – Government in which the people elect those who govern and passlaws; also called a republic.Constitutional democracy – A government that enforces recognized limits on those who governand allows the voice of the people to be heard through free, fair, and relatively frequentelections.Constitutionalism – The set of arrangements, including checks and balances, federalism,separation of powers, rule of law, due process, and a bill of rights, that requires our leaders tolisten, think, bargain, and explain before they act or make laws. We then hold them politicallyand legally accountable for how they exercise their powers.Statism – The idea that the rights of the nation are supreme over the rights of the individualswho make up the nation.Popular consent – The idea that a just government must derive its powers from the consent ofthe people it governs.Majority rule – Governance according to the expressed preferences of the majority.Majority – The candidate or party that wins more than half the votes cast in an election.Plurality – Candidate or party with the most votes cast in an election, not necessarily more thanhalf.Theocracy – Government by religious leaders, who claim divine guidance.Articles of Confederation – The first governing document of the confederated states drafted in1777, ratified in 1781, and replaced by the present Constitution in 1789.Annapolis Convention – A convention held in September 1786 to consider problems of tradeand navigation, attended by five states and important because it issued the call to Congress andthe states for what became the Constitutional Convention.Constitutional Convention – The convention in Philadelphia, May 25 to September 17, 1787,that debated and agreed upon the Constitution of the United States.

Shays’s Rebellion – Rebellion led by Daniel Shays of farmers in western Massachusetts in1786-1787, protesting mortgage foreclosures. It highlighted the need for a strong nationalgovernment just as the call for the Constitutional Convention went out.Bicameralism – The principle of a two-house legislature.Virginia Plan – Initial proposal at the Constitutional Convention made by the Virginiadelegation for a strong central government with a bicameral legislature dominated by the bigstates.New Jersey Plan – Proposal at the Constitutional Convention made by William Paterson of NewJersey for a central government with a single-house legislature in which each state would berepresented equally.Connecticut Compromise – Compromise agreement by states at the Constitutional Conventionfor a bicameral legislature with a lower house in which representation would be based onpopulation and an upper house in which each state would have two senators.Three-fifths compromise – Compromise between northern and southern states at theConstitutional Convention that three-fifths of the slave population would be counted fordetermining direct taxation and representation in the House of Representatives.Federalists – Supporters of ratification of the Constitution and of a strong central government.Antifederalists – Opponents of ratification of the Constitution and of a strong centralgovernment, generally.The Federalist – Essays promoting ratification of the Constitution, published anonymously byAlexander Hamilton, John Jay, and James Madison in 1787 and 1788.The Living ConstitutionNatural law – God’s or nature’s law that defines right from wrong and is higher than humanlaw.Separation of powers – Constitutional division of powers among the legislative, executive, andjudicial branches, with the legislative branch making law, the executive applying and enforcingthe law, and the judiciary interpreting the law.Checks and balances – Constitutional grant of powers that enables each of the three branches ofgovernment to check some acts of the others and therefore ensure that no branch can dominate.Divided government – Governance divided between the parties, especially when one holds thepresidency and the other controls one or both houses of Congress.Direct primary – Election in which voters choose party nominees.

Initiative – Procedure whereby a certain number of voters may, by petition, propose a law orconstitutional amendment and have it submitted to the voters.Referendum – Procedure for submitting to popular vote measures passed by the legislature orproposed amendments to a state constitution.Recall – Procedure for submitting to popular vote the removal of officials from office before theend of their term.Marbury v. Madison - A landmark case in United States law and the basis for the exercise ofjudicial review in the United States, under Article Three of the United States Constitution. Thecase resulted from a petition to the Supreme Court by William Marbury, who had been appointedas Justice of the Peace in the District of Columbia by President John Adams shortly beforeleaving office, but whose commission was not delivered as required by John Marshall, Adams'sSecretary of State. When Thomas Jefferson assumed office, he ordered the new Secretary ofState, James Madison, to withhold Marbury's and several other men's commissions. Marbury andthree others petitioned the Court to force Madison to deliver the commission to Marbury. TheSupreme Court denied Marbury's petition, holding that the statute upon which he based his claimwas unconstitutional.Judicial review – The power of a court to refuse to enforce a law or a government regulationthat in the opinion of the judges conflicts with the U.S. Constitution or, in a state court, the stateconstitution.Writ of mandamus – Court order directing an official to perform an official duty.Impeachment – Formal accusation by the lower house of legislature against a public official, thefirst step in removal from office.Executive order – Directive issued by a president or governor that has the force of law.Executive privilege – The power to keep executive communications confidential, especially ifthey relate to national security.Impoundment – Presidential refusal to allow an agency to spend funds that Congress authorizedand appropriated.American FederalismDevolution revolution – The effort to slow the growth of the federal government by returningmany functions to the states.Federalism – Constitutional arrangement in which power is distributed between a centralgovernment and subdivisional governments, called states in the United States. The national andthe subdivisional governments both exercise direct authority over individuals.

Dual federalism (layer cake federalism) – Views the Constitution as giving a limited list ofpowers—primarily foreign policy and national defense—to the national government, leaving therest to the sovereign states. Each level of government is dominant within its own sphere. TheSupreme Court serves as the umpire between the national government and the states in disputesover which level of government has responsibility for a particular activity.Cooperative federalism – Stresses federalism as a system of intergovernmental relations indelivering governmental goods and services to the people and calls for cooperation amongvarious levels of government.Marble cake federalism – Conceives of federalism as a marble cake in which all levels ofgovernment are involved in a variety of issues and programs, rather than a layer cake, or dualfederalism, with fixed divisions between layers or levels of government.Competitive federalism – Views the national government, 50 states, and thousands of localgovernments as competing with each other over ways to put together packages of services andtaxes. Applies the analogy of the marketplace: we have some choice about which state and citywe want to “use”, just as we have choices about what kind of telephone service we use.Permissive federalism – Implies that although federalism provides “a sharing of power andauthority between the national and state governments, the state’s share rests upon the permissionand permissiveness of the national government.”“Our federalism” – Championed by Ronald Reagan, presumes that the power of the federalgovernment is limited in favor of the broad powers reserved to the states.Unitary system – Constitutional arrangement that concentrates power in a central government.Confederation – Constitutional arrangement in which sovereign nations or states, by compact,create a central government but carefully limit its power and do not give it direct authority overindividuals.Express powers – Powers the Constitution specifically grants to one of the branches of thenational government.Implied powers – Powers inferred from the express powers that allow Congress to carry out itsfunctions.Necessary and proper clause – Clause of the Constitution (Article 1, Section 8, Clause 3)setting forth the implied powers of Congress. It states that Congress, in addition to its expresspowers has the right to make all laws necessary and proper to carry out all powers theConstitution vests in the national government.

Inherent powers – The powers of the national government in foreign affairs that the SupremeCourt has declared do not depend on constitutional grants but rather grow out of the veryexistence of the national government.Commerce clause – The clause in the Constitution (Article 1, Section 8, Clause 1) that givesCongress the power to regulate all business activities that cross state lines or affect more thanone state or other nations.Federal mandate – A requirement the federal government imposes as a condition for receivingfederal funds.Concurrent powers – Powers that the Constitution gives to both the national and stategovernments, such as the power to levy taxes.Full faith and credit clause – Clause in the Constitution (Article 4, Section 1) requiring eachstate to recognize the civil judgments rendered by the courts of the other states and to accepttheir public records and acts as valid.Extradition – Legal process whereby an alleged criminal offender is surrendered by the officialsof one states to officials of the state in which the crime is alleged to have been committed.Interstate compact – An agreement among two or more states. Congress must approve mostsuch agreements.National supremacy – Constitutional doctrine that whenever conflict occurs between theconstitutionally authorized actions of the national government and those of a state or localgovernment, the actions of the federal government will prevail.Preemption – The right of a federal law or a regulation to preclude enforcement of a state orlocal law or regulation.Centralists – People who favor national action over action at the state and local levels.Decentralists – People who favor state or local action rather than national action.Categorical-formula grants – Congress appropriates funds for a specific purpose, such asschool lunches or for building airports and highways. These funds are allocated by formula andare subject to detailed federal conditions, often on a matching basis; that is, the local governmentreceiving the federal funds must put up some of its own dollars. Categorical grants, in addition,provide federal supervision to ensure that the federal dollars are spent as Congress wants.Project grants – Congress appropriates a certain sum, which is allocated to state and local unitsand sometimes to nongovernmental agencies, based on applications from those who wish toparticipate. Examples are grants by the National Science Foundation to universities and researchinstitutes to support the work of scientists or grants to states and localities to support training andemployment programs.

State’s rights – Powers expressly or implicitly reserved to the states.Block grants – These are broad state grants to states for prescribed activities—welfare, childcare, education, social services, preventive health care, and health services—with only a fewstrings attached. States have greater flexibility in deciding how to spend block grant dollars, butwhen the federal funds for any fiscal year are gone, there are no more matching federal dollars.Direct orders – A technique of Congress to establish federal regulations. Direct orders must becomplied with under threat of criminal or civil sanction. An example is the Equal EmploymentOpportunity Act of 1972, barring job discrimination by state and local governments on the basisof race, color, religion, sex, and national origin.Cross-cutting requirements – A technique of Congress to establish federal regulations. Federalgrants may establish certain conditions that extend to all activities supported by federal funds,regardless of their source. The first and most famous of these is Title VI of the 1964 Civil RightsAct, which holds that in the use of federal funds, no person may be discriminated against on thebasis of race, color, or national origin. More than 60 cross-cutting requirements concern suchmatters as the environment, historic preservation, contract wage rates, access to governmentinformation, the care of experimental animals, and the treatment of human subjects in researchprojects.Crossover sanctions – A technique of Congress to establish federal regulations. These sanctionspermit the use of federal money in one program to influence state and local policy in another. Forexample, a 1984 act reduced federal highway aid by up to 15 percent for any state that failed toadopt a minimum drinking age of 21.Total and Partial Preemption - A technique of Congress to establish federal regulations. Totalpreemption rests on the national governments power under the supremacy and commerce clausesto preempt conflicting state and local activity. Building on this constitutional authority, federallaw in certain areas entirely preempts state and local governments from the

Government by Algorithm: Artificial Intelligence in .

The Ultimate Student’s Guide to AP US Government

The Alabama Journal of Government Finance