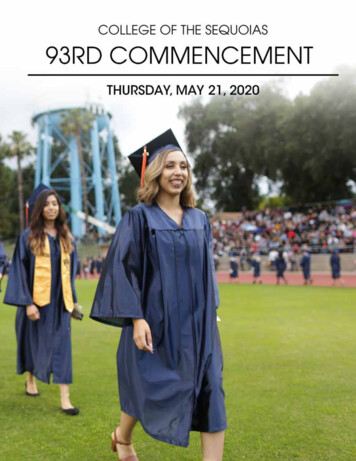 MISSION STATEMENTSequoias Community College District provides excellent higher education in a spirit of equity for ourdiverse student population. We believe in students achieving their full educational potential andsupport student success in attaining a variety of degrees and certificates, from basic skills to transfereducation and workforce development.Reaffirmed by the Board of Trustees on March 8, 2021 Mission StatementABOUT COLLEGE OF THE SEQUOIASCollege of the Sequoias is a two-year community college with an enrollment of about 14,000students that offers educational and enrichment programs for the residents of its district inTulare and Kings counties. The college district was established in 1926 and moved to itscurrent 62-acre campus in Visalia in 1940. In addition to the Visalia campus, COS operates acollege center in Hanford, opened the newest college center in Tulare, and conductsclasses at various locations throughout communities in the district. College of the Sequoias isa member of the American Association of Community Colleges and the Community CollegeLeague of California. The college is accredited by the Accrediting Commission forCommunity and Junior Colleges of the Western Association of Schools and Colleges, an institutional accrediting body recognized by the Commission on Recognition of PostsecondaryAccreditation and the U.S. Department of Education. The college is approved by the UnitedStates Immigration and Naturalization Service to accept international students and isapproved for veteran training under state and federal laws.

STUDENT AWARD RECIPIENTSZOE MARIE SWEENEYACADEMIC EXCELLENCE AWARDZoe portrays and exemplifies the qualities of a College of the Sequoias student. She isdetermined, humbled, dedicated, caring for others, and has a pleasant personality. Shehas demonstrated that she can exceed in her academics beyond the highest standardswhile volunteering herself to many other projects and extracurricular activities, suchas but not limited to Friday Night Labs, Expanding Your Horizons – Young Women inScience Conferences, UC Davis Pre-Medical Conference, Noche de Ciencias, MESA, andmany other student clubs. She was also accepted as an undergraduate researcher inneuroscience during an out-of-state internship during the semester break.Zoe is a true Giant. Her impressive grade point average of a 4.0 is representative ofchallenging curriculum from course work in Organic Chemistry, Modern Physics, Calculus(1, 2, and 3), Computer Science, Biology, Philosophy, and Sociology. Her mind is as strongas her determination, and her heart is as humble as her personality. She delivers herself welland represents the college in and outside the classroom.Zoe’s contribution to our campus extends beyond her academic achievement and herparticipation in the various activities. She was a Supplemental Instructor (SI) to some ofthe most challenging courses and tutored other students in the MESA support lab. She alsoassisted some of her professors with transitioning their courses into Canvas by providingthem with a student’s perspective on how the program functions.Zoe has impressive potential. She exhibits intelligence beyond her years. Her characterholds sincere leadership and strong unselfish values. In the Fall, Zoe plans to transfer to theUniversity of California – Los Angeles.

MIA SYVIRATHPHANCAMPUS COMMUNITY SERVICE AWARDMia Syvirathphan has been an extremely busy young lady while attending COS. Heroutstanding leadership skills have been reflected in many ways through campusengagement and her involvement in the community. Mia served as the Commissionerof Clubs in Student Senate and has been instrumental in encouraging clubs on campusto take an active role in campus life. Her desire to promote campus involvement wasreflected through policies and procedures to help structure the organization of clubs.Not only was she involved in Student Senate and clubs, but she was an active memberof the REALM program. This program encourages incoming students that are STEM majorsto network with the REALM program alumni. REALM also does outreach to our local highschools. She was actively involved in STEPS which registered high school students in theirclasses and provided guided campus tours to incoming freshmen. Mia served on severalcampus communities and was an excellent student representative. She took an activerole in many of the STEM program activities encouraging students to get involved in thescience, technology, engineering, and mathematics (STEM). Not only does Mia take anactive role on campus life but she is dedicated to serve our community. She has taken anactive role in a community event “Expanding your Horizons” which involved 800 youngwomen in our community. This event explores STEM careers by engaging them in interestinghands on activities. She volunteers her time at Wilson Elementary School as a teacher aidfor Kindergarten classes teaching math and English skills. She is an active member in the IuMien Community and participates in events for this organization.Mia has achieved high academic standards while still taking an active role in campus lifeand in the community. Due to her dedication and efforts this has made her an excellentrecipient for this award. She plans to transfer to Fresno State and major in Biology.

ERIKA MACEDOGIANT SPIRIT AWARDErika Macedo is a bright student who has worked hard to strive towards reaching heracademic goals. She has shown great determination and perseverance while makingher way through her courses with English being her second language. She wants to be anexample for her three boys and show them the importance of getting an education in acountry that gives everyone the opportunity to attain educational goals.Erika has demonstrated great academic success all while raising a family, working,volunteering at her church, and being part of a Mariachi group. One semester, Erika hada medical condition that required surgery, but managed to continue working hard tocomplete her coursework. She did not allow her medical condition to get her off track. Inher pursuit of and ADT in Early Childhood Education she acknowledged that an ADT wouldrequire additional courses, but she wants to further her education to earn a bachelor’sdegree in the future. Which is something she had never considered when she first startedat COS. In addition, she wants to leave the door open to earn a multiple subject/specialeducation credential if she ever decided to change grade levels in teaching.While attending COS Erika applied for part-time jobs with TCOE since she had earned askills certificate making her eligible for entry-level jobs. To her surprise she was offered afulltime job. Her hard work and determination had paid off. Although in the beginningshe encountered some discouragement from coworkers she overcame her self-doubt andsucceeded. She continues to love her job. Erika decided to use her Giant Spirit to pushherself through difficult times and towards success.