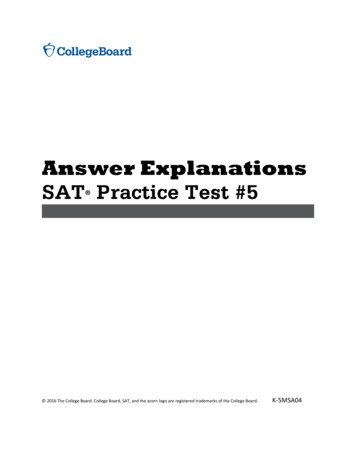 Answer ExplanationsSection 1: Reading TestQUESTION 1Choice D is the best answer. The passage begins with the main character, Lymie, sitting in a restaurantand reading a history book. The first paragraph describes the book in front of him (“Blank pages frontand back were filled in with maps, drawings, dates, comic cartoons, and organs of the body,” lines 1113). The second paragraph reveals what Lymie is reading about (the Peace of Paris and the Congress ofVienna) and suggests his intense concentration on the book (“sometimes he swallowed whole the foodthat he had no idea he was eating,” lines 23-24). In the third paragraph, the focus of the passage shiftsto a description and discussion of others in the restaurant, namely “A party of four, two men and twowomen . . . ” (lines 42-43).Choice A is incorrect because the passage does not provide observations made by other characters, onlyoffering Lymie’s and the narrator’s observations. Choice B is incorrect because the beginning of thepassage focuses on Lymie as he reads by himself and the end of the passage focuses on the arrival ofLymie’s father, with whom Lymie’s relationship seems somewhat strained. Choice C is incorrect becausethe setting is described in the beginning of the first paragraph but is never the main focus of thepassage.QUESTION 2Choice C is the best answer. The main purpose of the first paragraph is to establish the passage’s settingby describing a place and an object. The place is the Alcazar Restaurant, which is described as being“long and narrow” and decorated with “art moderne,” murals, and plants (lines 2-6), and the object isthe history book Lymie is reading.Choice A is incorrect because rather than establishing what Lymie does every night, the first paragraphdescribes what Lymie is doing on one night. Choice B is incorrect because nothing in the first paragraphindicates when the passage takes place, as the details provided (such as the restaurant and the book)are not specific to one era. Choice D is incorrect because nothing in the first paragraph clearlyforeshadows a later event.QUESTION 3

Choices B, C, and D are incorrect because lines 67-70 of the passage clearly establish that Lymie closeshis book because his father has arrived, not that he does so because the party of four is too loud (choiceB), because he has finished reading a section of the book (choice C), or because he is getting ready toleave (choice D).QUESTION 7Choice D is the best answer. In lines 74-79, the narrator describes Mr. Peters as “gray” and balding,noting that he has “lost weight” and his color is “poor.” This description suggests Mr. Peters is aging andlosing strength and vigor.Choices A, B, and C are incorrect because the description of Mr. Peters in lines 74-79 suggests he is aperson who is wan and losing vitality, not someone who is healthy and in good shape (choice A), angryand intimidating (choice B), or emotionally anxious (choice C).QUESTION 8Choice B is the best answer. In the last paragraph of the passage, Mr. Peters is described as beingunaware “that there had been any change” in his appearance since he was younger (lines 80-81). Laterin the paragraph, the passage states that “the young man” Mr. Peters once was “had never for onesecond deserted” him (lines 90-91). The main idea of the last paragraph is that Mr. Peters still thinks ofhimself as young, or at least acts as if he is a younger version of himself.Choice A is incorrect because Mr. Peters is spending time with Lymie, his son, and there is no indicationthat he generally does not spend time with his family. Choice C is incorrect because although there arebrief mentions of a diamond ring and manicured fingers, the paragraph focuses on Mr. Peters’s overallappearance, not on his awareness of status symbols. Choice D is incorrect because the last paragraphclearly states that Mr. Peters is “not aware that there had been any change” and thinks of himself asyoung.QUESTION 9Choice B is the best answer. In lines 81-85, Mr. Peters is described as having “straightened his tie selfconsciously” and gestured with a menu “so that the two women at the next table would notice thediamond ring on the fourth finger of his right hand.” Mr. Peters’s actions are those of someone whowants to attract attention and be noticed.Choices A, C, and D are incorrect because the lines cited do not support the idea Mr. Peters wants toattract attention to himself. Choices A and C address Mr. Peters’s view of himself. Choice D indicatesthat Mr. Peters’s view of himself affects his behavior but does not reveal that he acts in a way meant todraw attention.QUESTION 10

Choices A, C, and D are incorrect because lines 34-37 make it clear that Beecher believes women dohave an effect on society, even if it is an indirect effect. Beecher does not indicate that women’s effecton public life is ignored because most men are not interested (choice A), unnecessary because men donot need help governing society (choice C), or merely symbolic because women tend to be idealistic(choice D).QUESTION 14Choice D is the best answer. Regarding the dynamic of men and women in society, Beecher says thatone sex is given “the subordinate station” while the other is given the “superior” station (lines 1-2). Inthe context of how one gender exists in comparison to the other, the word “station” suggests a standingor rank.Choices A, B, and C are incorrect because in the context of the relative standing of men and women inBeecher’s society, the word “station” suggests a standing or rank, not a physical location or area(choices A, B, and C).QUESTION 15Choice C is the best answer. When describing how men and women can influence society, Beecher saysthe ways they can do so “should be altogether different and peculiar” (lines 11-12). In the context of the“altogether different” ways men and women can influence society, the word “peculiar” implies beingunique or distinctive.Choices A, B, and D are incorrect because in the context of the “altogether different” ways men andwomen can influence society, the word “peculiar” suggests something unique or distinctive, notsomething unusual and odd (choice A), unexpected (choice B), or rare (choice D).QUESTION 16Choice A is the best answer. In Passage 2, Grimké makes the main point that people have rights becausethey are human, not because of their gender or race. This is clear in lines 58-60, when Grimké states that“human beings have rights, because they are moral beings: the rights of all men grow out of their moralnature” and lines 65-68, when Grimké writes, “Now if rights are founded in the nature of our moralbeing, then the mere circumstance of sex does not give to man higher rights and responsibilities, than towoman.”Choices B, C, and D are incorrect because Grimké primarily emphasizes that all men and womeninherently have the same rights (“rights are founded in the nature of our moral being,” lines 65-66). Hercentral claim is not that men and women need to work together to change society (choice B), that moralrights are the distinguishing characteristic separating humans from animals (choice C), or that thereshould be equal opportunities for men and women to advance and succeed.QUESTION 17

Answer Explanations Section 1: Reading Test QUESTION 1 Choice D is the best answer. The passage begins with the main character, Lymie, sitting in a restaurant and reading a history book. The first paragraph describes the book in front of him (“lank pages front and back were filled in with maps, drawings, dates, comic cartoons, and organs of the body,” lines 11-13). The second paragraph .