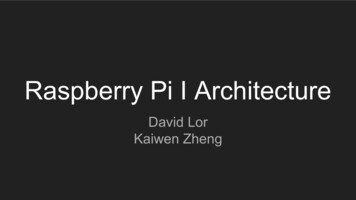 What is a Raspberry Pi?Raspberry Pi is a credit-card sized single-board computer designed andmanufactured by the Raspberry Pi foundation in the United Kingdom.Raspberry Pi has an ARMv6 700 MHz single-core processor, a VideoCore IV GPUand 512MB of RAM. it uses an SD card for its operating system and data storage.The Raspberry Pi officially supports Raspbian, a lightweight linux OS based onDebian.

History cont.In 2012, the team started its first production run consisted of 10,000 Raspberry Piunites manufactured by foundries in China and Taiwan.Unfortunately, there was a manufacturing issue where the ethernet jack on theRaspberry Pi. This incident caused some minor shipping delaysIt took the team six years of hardware development to create the Raspberry Pimakers and electronics enthusiasts adore today

Model BIn April 2012, the original Raspberry Pi, also known as themodel B, was launched.It offered an ARMv6 700 MHz single-core processor, aVideoCore IV GPU and 512MB of RAM, all packed in a creditcard size board.The model B supported 26-pin GPIO and a SD card slot forloading the operating system. Priced at 35 per unit.

Model AIn February 2013, the Raspberry Pi model A waslaunched, It packed the same ARM single-core processorand the GPU as model B with half of the RAM capacity at256MB.Priced at 25 per unit, the model A could be regarded asthe cheaper and less powerful version of model B.

Model B In July 2014, the Raspberry Pi model B was launched, Itwas a worthy successor to the original Raspberry Pi.Packing the same processing unit as its predecessor.The model B received two more USB ports, an updated40-pin GPIO layout, and a micro-SD card slot for loadingthe operating system.Priced at 30 per unit, the model B was cheaper andoffered more connectivity than model B, Making it anIdeal choice for education.

Model A In November 2014, the Raspberry Pi model A waslaunched, It offered improved specifications over the modelA.Packing the same processor as its predecessor, the modelA upgraded RAM capacity from 256MB to 512MB. Smallerfootprint, 40-pin GPIO, and micro-SD card.Priced at 20 per unit, the model A was the smallest andcheapest single-board computer at that time.

Static Branch Prediction Second level of branch prediction in processor is static branch prediction,which is based on the characteristics of the branch instruction.Uses no history informationARM1176JZF-S predicts all forward conditional branches not taken and allbackward branches taken.Added to mitigate the trouble experienced by the miss when first encounteringthe branch by the predictor

Projects and ApplicationsRetro Gameboy with Raspberry Pi. CreatorWarner Skoch started with the shell of an originalGameboy.He managed to fit a model B and, a color LCDscreen, and battery inside the chassis. Since theRaspberry Pi was a Linux computer, an emulatorwas installed.

Projects and Applications Cont.Project magic mirror. Creator Michael Teeuwplaced a LCD screen behind a transparentmirror and incorporated a Raspberry Pi forshowing personalized messages, a clock, andeven the upcoming weather.When the display was off, the project worked asa stand mirror. Triggered by some keywords,the display would wake up and show usefulinformation on the screen.

Raspberry Pi is a credit-card sized single-board computer designed and manufactured by the Raspberry Pi foundation in the United Kingdom. Raspberry Pi has an ARMv6 700 MHz single-core processor, a VideoCore IV GPU and 512MB of RAM. it uses an SD card for its operating system and data storage.File Size: 1015KB

Setting Up a Raspberry Pi for DStar