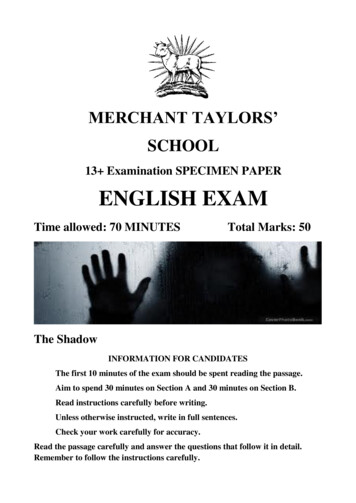 MERCHANT TAYLORS’SCHOOL13 Examination SPECIMEN PAPERENGLISH EXAMTime allowed: 70 MINUTESTotal Marks: 50The ShadowINFORMATION FOR CANDIDATESThe first 10 minutes of the exam should be spent reading the passage.Aim to spend 30 minutes on Section A and 30 minutes on Section B.Read instructions carefully before writing.Unless otherwise instructed, write in full sentences.Check your work carefully for accuracy.Read the passage carefully and answer the questions that follow it in detail.Remember to follow the instructions carefully.

In this extract from Long Lankin by Lindsey Barraclough, three children,Cora (the narrator), Roger and Pete go exploring. Cora and Roger have aterrifying experience The tall yellow wheat, almost ripe for harvesting, was spread out before us,moving gently in curving waves under the blue, cloudless sky. Among thestalks, clusters of poppies held their scarlet flower cups up to the hot sun.‘This way,’ Roger cried, plunging into the wheat.‘Ain’t the farmer going to blow his top if he sees us squashing his field?’ Isaid.‘No, it’s only old Ferguson. He’s a great big bloke with a face like a bigpurple balloon. He’d never catch us. He can’t run for toffee,’ laughedRoger.Pete and I trailed upwards through the field behind Roger, stamping downthe wheat as we went. I tore up some poppies and held them in a loosebunch.The pillbox was a plain concrete bunker standing in front of the stream andthe hedgerow behind it. It had been abandoned for so many years that thewild flowers and nettles grew tall and lush for yards around it, and the briars,bristling with rosehips, rose as high as the windows, open slits that faced themarshes and the river and the sea beyond.A thick, extra wall stood about two feet away from the doorway. Roger saidit was to shield the soldiers from bomb blasts, but it looked like the entranceto a gents’ toilet to me.Inside, it smelled like a gents’ toilet as well. I held my breath.It was impossible to see anything in the darkness at first, but little by little Imade out the shapes of old smashed bottles, sweet papers, newspapers andother rubbish trodden into the damp earth floor.‘Pete and me were going to make a camp here once,’ said Roger, ‘but wedidn’t want to sit down-‘‘Or eat anything,’ added Pete, ‘in case we got a disease.’‘Imagine if you was a soldier and had to stay in here all night long, waitingfor the invasion,’ I said. ‘It must have made you want to be sick.’‘Yeah, but they wouldn’t have wee’d in it then,’ said Roger. ‘They’d havegone outside.’Pete began to hop from one foot to the other. ‘Why did you have to starttalking about widdling?’ he said. ‘I’m nipping out for a minute.’I’m not sure how long it was before Roger and I fell silent, beginning to feelthere was something outside, something that wasn’t Pete.When did we start to hear the low, swishing, crunching noise, of somethingcoming nearer and nearer still, pushing its way through the wheat? Whendid we first notice the smell, like something old, damp and rotten, strongereven than the smell inside the pillbox? Why did we look at each other withgreat wide-open eyes, not daring to blink, not daring even to whisper?Why did my skin tingle and my breath become a shallow tremor?We slid our eyes towards the doorway.510152025303540

A huge black shadow was moving slowly across the concrete slabs of theoutside wall, in the shape of a long, crawling man. As it neared the entrance,the shadow loomed up, so massive that it shut out every inch of sunlight onthe wall.It waited for a moment, then made a rattling, rasping sound as if it weredrawing in breath, or smelling.There was no way out. My legs began to tremble. The flowers fell from myhand. My head swam. I felt myself swaying.Suddenly I realized Roger was holding me up. I had sunk down halfway tothe floor.‘It’s gone! It’s gone!’ croaked Roger.‘Pete! Where’s Pete?’ I panted. We roused ourselves and rushed outthrough the doorway.Pete was crashing through the bushes on the other side of the ditch, then hejumped over it and landed on the bank.‘We going home now?’ he chirped.‘Yeah,’ said Roger weakly. ‘Yeah, mate.’‘Blimey, what’s the matter with you two? Look like you’ve seen a ghost.’As Pete leaped through the wheat on his way to the gap in the hedge, Rogerand I stood and stared at the flattened trails through the field. One track,ours, curved towards the lane. In the other track something was moving, onall fours, towards the edge of the graveyard beyond the hedgerow at thebottom. Where the wheat had been crushed, the channel ran blood-red withthe scattered petals of broken poppies.45505560

Write a composition using ONE of the following ideas.Write between one and two sides depending on the size of your handwriting. About5 minutes of planning will help - hand in your plan with your composition.Remember to proof-read your work very carefully.EITHER1. What happens next? Write a continuation of the story. Don’t write about too many different things and avoid repeating partsfrom the passage. Try to write in the same style as the passage. Consider the setting of the passage and the atmosphere created in thestory so far.OR2. Write a description of the following scene: Don’t tell a story: make sure you only describe the single moment shownin the picture. Remember to use creative description to entertain and excite the reader.TOTAL FOR SECTION B: 25 MARKS

‘No, it’s only old Ferguson. He’s a great big bloke with a face like a big purple balloon. He’d never catch us. He can’t run for toffee,’ laughed Roger. Pete and I trailed upwards through the field behind Roger, stamping down the wheat as we went. I tore up some poppies and held them in a loose bunch. The pillbox was a plain concrete bunker standing in front of the stream and the .

To see the final version of this paper please visit the .

History 210A Readings List for Paper Some of these titles .