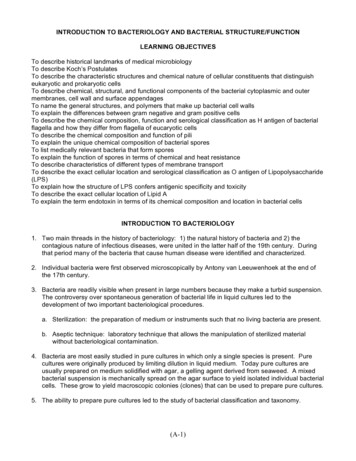 INTRODUCTION TO BACTERIOLOGY AND BACTERIAL STRUCTURE/FUNCTIONLEARNING OBJECTIVESTo describe historical landmarks of medical microbiologyTo describe Koch’s PostulatesTo describe the characteristic structures and chemical nature of cellular constituents that distinguisheukaryotic and prokaryotic cellsTo describe chemical, structural, and functional components of the bacterial cytoplasmic and outermembranes, cell wall and surface appendagesTo name the general structures, and polymers that make up bacterial cell wallsTo explain the differences between gram negative and gram positive cellsTo describe the chemical composition, function and serological classification as H antigen of bacterialflagella and how they differ from flagella of eucaryotic cellsTo describe the chemical composition and function of piliTo explain the unique chemical composition of bacterial sporesTo list medically relevant bacteria that form sporesTo explain the function of spores in terms of chemical and heat resistanceTo describe characteristics of different types of membrane transportTo describe the exact cellular location and serological classification as O antigen of Lipopolysaccharide(LPS)To explain how the structure of LPS confers antigenic specificity and toxicityTo describe the exact cellular location of Lipid ATo explain the term endotoxin in terms of its chemical composition and location in bacterial cellsINTRODUCTION TO BACTERIOLOGY1. Two main threads in the history of bacteriology: 1) the natural history of bacteria and 2) thecontagious nature of infectious diseases, were united in the latter half of the 19th century. Duringthat period many of the bacteria that cause human disease were identified and characterized.2. Individual bacteria were first observed microscopically by Antony van Leeuwenhoek at the end ofthe 17th century.3. Bacteria are readily visible when present in large numbers because they make a turbid suspension.The controversy over spontaneous generation of bacterial life in liquid cultures led to thedevelopment of two important bacteriological procedures.a. Sterilization: the preparation of medium or instruments such that no living bacteria are present.b. Aseptic technique: laboratory technique that allows the manipulation of sterilized materialwithout bacteriological contamination.4. Bacteria are most easily studied in pure cultures in which only a single species is present. Purecultures were originally produced by limiting dilution in liquid medium. Today pure cultures areusually prepared on medium solidified with agar, a gelling agent derived from seaweed. A mixedbacterial suspension is mechanically spread on the agar surface to yield isolated individual bacterialcells. These grow to yield macroscopic colonies (clones) that can be used to prepare pure cultures.5. The ability to prepare pure cultures led to the study of bacterial classification and taxonomy.(A-1)

a. The first basis for classification was shape. Round bacteria are called cocci (singular coccus).Rod shaped bacteria are called bacilli (singular bacillus). Other shapes will be considered laterin the course.b. Bacteria are very difficult to study microscopically unless stained. The staining characteristics ofbacteria in the Gram stain are very useful in classification. Gram positives are violet, while gramnegatives are red.c. Bacterial taxonomy today depends upon the extent of DNA sequence homology. An importantlaboratory technique for the amplification and detection of specific DNA sequences (as, forexample, in a bacterium or a virus) is the polymerase chain reaction (PCR). Examples of whenPCR is used for clinical diagnostics will be considered later in this course. However, for routinelaboratory diagnosis the most important bacterial characteristics are:1.The morphology of colonies on appropriate agar medium.2.Microscopic morphology and staining of individual bacteria.3.Simple biochemical characteristics such as the ability to ferment a given carbohydrate.4.Specific antigens detected by known antisera.6. Koch’s Postulates. The use of pure cultures has made possible the identification of the bacterialetiology of many infectious diseases. The original rules for the proof of microbial etiology (Koch'sPostulates):a.b.c.d.Find the bacteria in all cases of the disease.Grow the bacteria in pure cultures.Reproduce the disease (in animals) using the pure culture.Reisolate the bacteria in pure culture from the experimental infection.These rules cannot be applied to all infectious diseases. Some infectious diseases, such asobligate intracellular pathogens (i.e., those organisms that cannot grow on laboratory medium butrequire a host cell to grow) will not answer all of Koch’s postulates.7. Koch’s Molecular Postulates. Koch’s Molecular Postulates were put forth by Stanley Falkow in1988 to deal with defining the molecular basis by which a specific infectious disease is caused.a. The phenotype under investigation should be associated significantly more often with a pathogenicorganism than with a nonpathogenic member or strain.b. Specific inactivation of a gene (or genes) associated with the suspected virulence trait should lead toa measurable decrease in virulence.c. Restoration of full pathogenicity should accompany replacement of the mutated gene with the wildtype original.(A-2)

BACTERIAL STRUCTURE AND FUNCTION: THE MICROBIAL WORLD(Introduction to the Procaryotic Cell)Reading assignment:Levinson, Chapter 1, 2 (omit plasmids and transposons until geneticslectures), and 5Classes of Microorganisms (which classes contain human pathogens?)Distinguishing CharacteristicsAlgae:no pathogens, all photosyntheticFungi:some pathogens, nonphotosynthetic; rigid cell wallProtozoa:some pathogens, no rigid cell wall; unicellular, nonphotosynthetic(cysts have rigid walls)Bacteria:many pathogens; mostly require organic compounds as energy source butsome of the non-pathogens are photosynthetic; all (but one) have arigid cell wallMicroorganisms have been traditionally differentiated from animals and true plants on the basis of theirrelatively simple biological-organization. The higher plants and animals are multicellular and developdistinct tissue regions that differ from one another with respect to the kinds of cells of which they arecomposed. A further level of internal complexity may be achieved by the combination of different tissuesinto a specialized local structure known as an organ (e.g. liver or leaf). Microorganisms are unicellular,but there is an increasing realization that they can act as multicellular groups and show differentiation intofunctionally distinct regions. Examples include stalk and spore formation in the soil microbe Myxococcusxanthus, and the formation of surface microbial communities on implants by pathogenic microbes.Microorganisms are divided into two subgroups on basis of structure of the individual cell. (This hasclinical importance, since different classes of antibiotics are used to treat pathogens in each group.)Higher Microorganisms:(Eukarya domain)Fungi, Protozoa, Algae (Eucaryotic cells) (Eucaryotic "true" nucleus)Lower Microorganisms:(Bacterial domain)Bacteria (Procaryotic cells)(A-3)

Characteristics of structure and function exhibited by Eucaryotic as compared to Procaryotic cells.(These differences are often important for understanding the mechanism of action of chemotherapeuticagents. Antibiotics useful for combating bacterial infections are often useless against fungal infections.)1. Chromosome(s)Eucaryotic:Each cell contains a number of different linear chromosomes contained Within theNuclear Membrane. Mitosis occurs.Procaryotic:Each cell generally contains one circular chromosome. Not bound by a nuclearmembrane. The mechanism of chromosome segregation during division does notinvolve mitosis.2. Mitochondria and other membrane bound structures within the cytoplasm housing specific parts ofthe functional machinery of the cell.Eucaryotic:Eucaryotic mitochondrion contains the oxidative enzymes and carries out oxidativephosphorylation. Eucaryotic cells also contain other membrane-bound structures,such as vacuoles, peroxisomes, etc.Procaryotic:Procaryotic cells contain no mitochondria, although mitochondria likely evolvedfrom prokaryotes (“endosymbiotic hypothesis”). Oxidative enzymes are associatedwith cytoplasmic membrane of cell. Oxidative phosphorylation is associated withthe cytoplasmic membrane.A general characteristic of procaryotic cell: No membrane bound structures smaller than the cell itself.There are a few exceptions to this generalization, but there are no elaborate membrane boundstructures inside of the cytoplasmic membrane in the procaryotic cell. Procaryotic cells do demonstrateorganization at the level of protein localization (e.g., some proteins are localized to the pole of the celland some to the center of the cell)3.Mechanism of cellular movement—a third way to distinguish eucaryotic from procaryotic cells.Eucaryotic:Movement may be accomplished by cytoplasmic streaming (amoeboidmovement) or by contraction of flagella or cilia.(The flagellum or cilium of eucaryotic cells, when present, is comprised ofmicrotubules in a specific 9 doublet:2 singlet arrangement that issurrounded by a membrane continuous with the cell membrane.)Procaryotic:There is no cytoplasmic streaming or amoeboid movement. (In fact, thecytoplasm of the bacterial cell is very dense, due to a high content ofribosomes necessary for the rapid protein synthesis required for rapidgrowth.) Some bacterial cells also have flagella. However, the structure ofbacterial flagella is very different (a long, helical filament composed ofrepeating protein (flagellin) subunits with a hollow tube down the middle).There are no microtubules in the procaryotic flagellum and it typically hasno membrane coat.(A-4)

4. Cell wall:A protective structure; strength due to macro-molecular mesh ofpolysaccharide. Animal cells do not have cell walls.Eucaryotic:In higher plants and green algae the cell wall is composed of thepolysaccharide cellulose (polymer of glucose). In most fungi the cell wall iscomposed of chitin (polymer of acetyl glucosamine) and beta 1,3 glucan (apolymer of glucose).Procaryotic:In most procaryotes, the cell wall is composed of a peptidoglycan polymer,containing muramic acid (derivative of acetyl glucosamine), D-amino acidsand other unusual amino acids as unique components, which are not foundin eucaryotic cells. (The extraordinary ability of an antibiotic such aspenicillin to kill without harming human cells was explained when it wasdiscovered that penicillin interfered with the formation of thispeptidoglycan.)5. RNA:Eucaryotic:RNA is transcribed in the nucleus, spliced, and transported to theendoplasmic reticulum where it is translated into protein.Procaryotic:Since there is no nucleus, the nascent RNA is translated as it istranscribed. There is no RNA splicing.NOTE:Procaryotic cells are divided into two major groups, the bacteria (true bacteria) and thearchaea. All prokaryotes of medical importance are bacteria, while the archaea inhabitunusual environmental niches. Archaea exhibit considerable differences in cellularstructures such as in their membranes and cell walls. We will only discuss bacteria inthese notes. Therefore, when we use the term "bacteria", we are not including archaea.Sometimes bacteria are referred to as “eubacteria” for “true bacteria”, but this term israrely used within the context of infectious disease.(A-5)

RELATIVE SIZE OF MICROORGANISMS(Most bacteria of medical interest have dimensions of l micrometer [µm].)Some specific examples are given below to illustrate the size variation of microscopic forms. (Thismaterial is illustrative, and should not be memorized.)(compare to) lymphocyte (one of the smallest mammalian cells)Bacillus anthracis (one of the larger bacteria)Francisella tularensis (a small bacterium)10 mm (diameter)1 x 3 µm0.2 x 0.5 µmMycoplasma (smallest free-living organism)0.175 µm (175nm)Large viruses (pox) (note how these overlap thesmallest bacteria in size)Polio virus (a small virus)(compare to) egg albumin molecule200 x 300 nm25 nm2.5 x 10 nm1 µm (micrometer, older term micron) 0.001mm 1000 nm (nanometer)Since the resolving power of the light microscope is 0.2 µm, it is obvious that the highest possiblemagnification must be used to detect bacteria in clinical specimens. Therefore, stained clinicalspecimens are always examined with the use of the oil immersion lens. Lower magnifications are usedto locate the specimen, but definitive determination of shape and color require the oil immersionobjective (900x to 1,000x magnification).Note that even the largest viruses and a few of the smallest bacteria are below the resolving power ofthe light microscope.A theoretical comment, not for memorization for examination.In principle, the smallest size for a procaryotic cell is set by molecular limitations. In order to repr 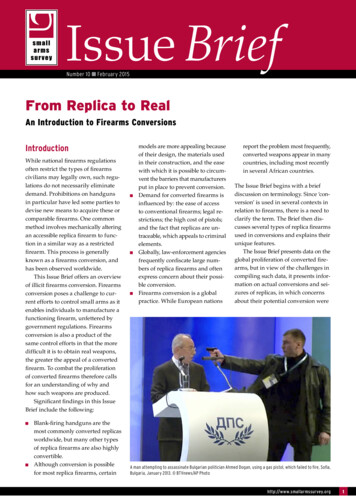 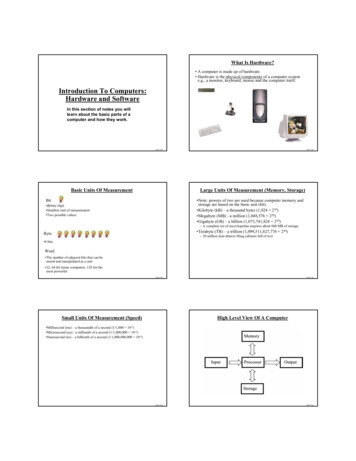 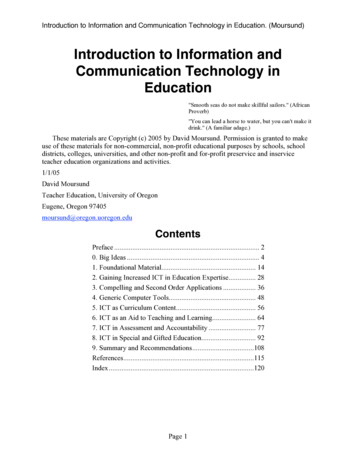 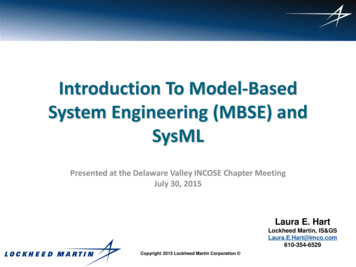 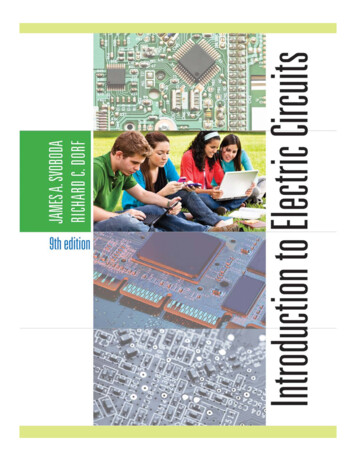 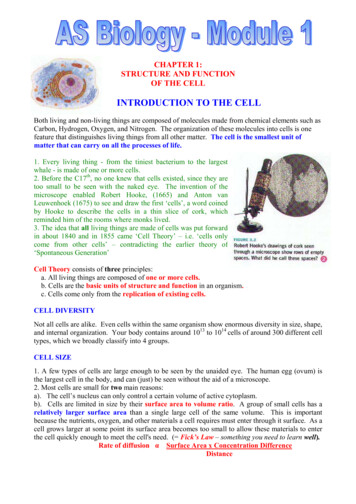 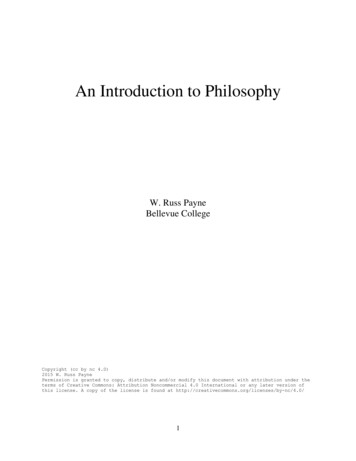 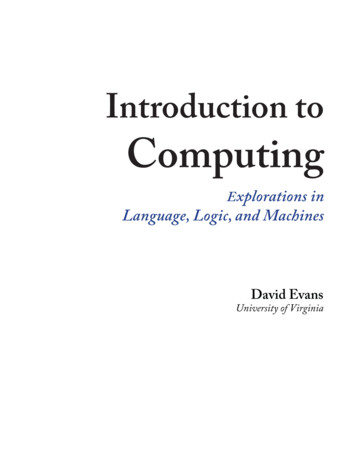 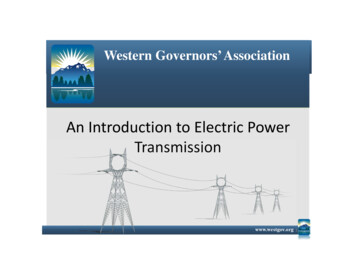