AN INTRODUCTION TO ISLAMIC FINANCE - Cimaglobal 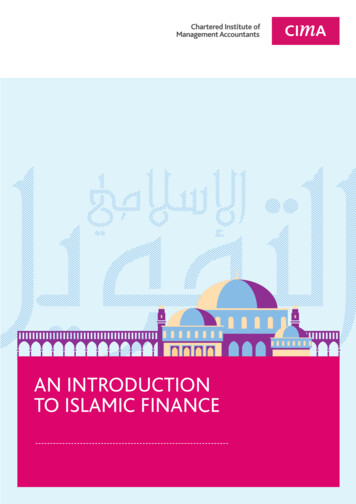 Now a dynamic area of the international financial servicessector and with a rising demand for a more ethical approachto finance, Islamic finance is set to continue increasing inimportance over the next decade.Following the successful review of the original CIMACertificate in Islamic Finance we took the opportunity todevelop the structure of the qualification and how it is offeredto reflect the changing requirements for Islamic finance inbusiness. In addition to being able to complete the CIMAAdvanced Diploma in Islamic Finance, students can nowspecialise in areas of their choice which provides a morerelevant and focused learning and development.WELCOMECONTENTSThe following guide has been created to introduceyou to the exciting developments currently takingplace in Islamic finance. The past 30 to 40 yearshas seen dramatic changes in this sector of thefinance industry with a marked growth in boththe demand for and the provision of productsand services. The Islamic finance industry is stillgrowing at an exceptional rate as more companiesexpand into or further develop their offerings inthis area.To know how Islamic finance may impact youor your business efforts and what opportunitiesit may pose you need to understand the basicprinciples. We hope that this brief introduction willhelp you on your journey.Find out more about what support CIMA can offeron Islamic finance at www.cimaglobal.com/ifI was always interested in moving into Islamic financeby my personal preference and the career opportunityavailable in this fast growing industry.Chistie Moinuddin,Senior Manager, Finance, HSBC AmanahWelcome 1. Introduction 4. Riba and Gharar 1144.1 Riba 111.1 Islamic tradition 54.2 Gharar 121.2 The meaning of Islamic finance 65. Profit and loss sharing 132. The components of Islamic finance 76. Islamic finance compared with conventional finance 1477. Shari’ah compliance and the equity market 148. Key issues 152.1 Banking and interest (Riba) 2.1.1 Islamic banking – the relationship betweenthe user and the supplier of funds 78.1 Prohibited trading items 152.2 Takaful – Islamic insurance 88.2 Acceptable practice 152.3 Islamic capital markets 88.3 Major contacts used 163. The salient features of Islamic finance 99. Requirements for sustained growth 173.1 Interest free 910. What if? 173.2 The need for underlying assets 910.1 The credit crisis 173.3 The avoidance of uncertainty or gambling 910.2 Increasing cost of food staples around the world 173.4 Profit and loss sharing 911. CIMA qualifications in Islamic finance 183.5 Rights and liabilities of banks and customers 1011.1 Certificates in Islamic finance 183.6 Shari’ah compliance 1011.2 CIMA Diploma in Islamic Finance (CDIF) 193.7 Unlawful goods or services 1011.3 CIMA Advanced Diploma in Islamic Finance (CADIF) 193.8 Overriding principles of Islamic law 1011.4 Fees 20

45INTRODUCTIONIslamic finance, despite its name, is not a religious product.It is however a growing series of financial productsdeveloped to meet the requirements of a specific group ofpeople. Conventional finance includes elements (interestand risk) which are prohibited under Shari’ah law.Developments in Islamic finance have taken place to allowMuslims to invest savings and raise finance in a way whichdoes not compromise their religious and ethical beliefs.It is estimated that between 1.5 and 1.8 billion people (onequarter of the world’s population) are Muslim.Geographically, most Muslims live in Asia (over 60%) or theMiddle East and North Africa (about 20%). Despite thesefigures, Islamic finance is still very much a niche market,with the vast majority of Muslims, who have access tofinance, using conventional financial products. The followingmap shows the geographical spread of the Muslimpopulation throughout the world as a percentage of eachcountry’s population, with the highest concentration in thedarkest shades of purple.While most think of Islam as being focused in the MiddleEast and South East Asia, the vast majority of Muslims liveoutside of these two regions. Some examples are referencedin the table No.1While Islamic finance is a relatively small player in globalterms, most commentators agree that the current growthof between 15% and 20% in this niche market shows nosign of reducing in the short to medium-term. It isestimated that assets in the industry will reach 1 trillionby the end of 2010. This continued growth has been spurredby the actions of many governments around the world keento see Islamic finance develop. The UK government inparticular has already publicly backed growth in this sector,introducing changes to Stamp Duty rules to facilitate thegrowth in the Islamic mortgage market and the promise ofthe issue of a UK sovereign Sukuk (bond).Islamic finance, while emerging over the past four decades,has its roots in the past as well as the present. These links tothe past relate to the fact that it is based on principles andfeatures which were established more than 1,400 years ago.Its links to the present relate to the fact that these ancientfeatures are now being presented to contemporary societyin a form which is both modern and innovative. Islamicfinance is distinct from conventional finance in manyrespects but has a common goal in achieving the sameeconomic benefit as conventional finance offers to society.1.1 ISLAMIC TRADITIONThe essence of Islam is that it derives its principles andvalues from the Qur’an and the Traditions of the ProphetMuhammad. The history of Islamic law begins with therevelation of the Qur’an which contains legal principles andinjunctions dealing with subjects such as ritual, marriage,divorce, succession, commercial transactions and penal laws.In contrast, the Traditions of the Prophet Muhammad recordthe sayings, actions and tacit approvals of the ProphetMuhammad. The literature of the Traditions of the ProphetMuhammad covers a much wider range of topics than thelegal verses in the Qur’an.Muslims believe that Islam starts from a given orself‑evident premise, namely the revelation. It was with theMUSLIM PERCENTAGE OF POPULATION IN EACH COUNTRYTABLE 1:MUSLIM POPULATION% OF COUNTRY’TOTAL ssia16,482,00011.7Sri ,00076.2COUNTRYExample populations in Middle East and South East AsiaMalaysiaMuslim percentage of population in each country 1World map showing figures sourced from: Miller, Tracy, ed. (October 2009) Mapping the Global Muslim Population: A Report on the Size and Distribution of the World’s MuslimPopulation, Pew Research CenterSource: Miller, Tracy, ed. (October 2009), Mapping the Global Muslim Population: A Report on the Size and Distribution of the World’s Muslim Population, Pew Research Center

672. THE COMPONENTS OF ISLAMIC FINANCEaim of directing and guiding humanity to the realisation ofits moral potential and worldly worth that Islam undertookto create a system known as the Shari’ah. Shari’ah refers tocommandments, prohibitions, guidance, and principlesunder Islam and is the clear path for believers to follow inorder to obtain guidance in this world and deliverance inthe next.The Shari’ah provides guidance in terms of belief, moralconduct and practical rulings or laws. According to Islam, acomplete system of life is based on both legal prescriptionsand moral and good conduct. Moral values have beenincorporated as legal requirements in some specificcontracts such as Amanah (honesty) in Murabahah(mark‑up) financing. Other principles of moral valuespertaining to commercial transactions include: Timeliness in the payment of debt or delivery of an asset.The failure to observe this aspect might involve legalconsequences. Tolerance in terms of bargaining, where the parties areencouraged to be considerate to other’s requirements andcircumstances. Mutual revocation of a contract on request by one partyif one party finds him or herself uncomfortable with theoutcome of the transaction. Honesty or Amanah in all statements, representationsand warranties.These principles are not meant to be exhaustive but ratherto highlight areas where, according to Islam, morality isrelevant in commercial dealings.1.2 THE MEANING OF ISLAMIC FINANCEIslamic finance is a term that reflects financial business thatis not contradictory to the principles of the Shari’ah.Conventional finance, particularly conventional bankingbusiness, relies on taking deposits from and providing loansto the public. Therefore, the banker‑customer relationship isalways a debtor‑creditor relationship. A key aspect ofconventional banking is the giving or receiving of interest,which is specifically prohibited by the Shari’ah. For examplea conventional bank’s fixed deposit product is based on apromise by the borrower to the bank to repay the loan plusfixed interest to the lender (the bank) that is the depositor.Essentially, money deposited will result in more moneywhich is the basic wealth-producing structure of interestbased finance.In other non‑banking businesses, conventional products andservices, such as insurance and capital markets could bebased on elements that are not approved by Shari’ahprinciples such as uncertainty (Gharar) in insurance andinterest in conventional bonds or securities. In the case ofinsurance, the protection provided by the insurer inexchange for a premium is always uncertain as to itsamount as well as its actual time of happening. Aconventional bond normally pays the holder of the bondthe principal and interest.Conventional practices could also involve selling or buyinggoods and services that are unlawful from a Shari’ahperspective. These might be non‑halal foods such as pork,non‑slaughtered animals or animals not slaughteredaccording to Islamic principles, alcohol or services related togambling, pornography and entertainment. In short,conventional business practices could be non‑compliantfrom a contractual structure perspective (if they are basedon interest and uncertainty) and / or from a transactionalperspective when they are involved in producing, selling ordistributing goods and services that are not lawful accordingto the Shari’ah.2.1 BANKING AND INTEREST (RIBA)Islamic banking is the branch of Islamic finance that has seenthe most growth to date. It is also the branch of finance thatneeds to be viewed from a different perspective as it cannotreplicate conventional banking. This is because the mostimportant underlying principle of conventional banking isthat money creates money or that money has a premium,known as interest or usury. This practice (known in Arabic asRiba) is the antithesis of Islamic finance because Islamic law,from the beginning, has categorically denounced it. Moneyhas never been perceived as a commodity for which there is aprice for its use. Instead, Islamic law consistently viewsmoney as a medium of exchange, a store of value and a unitof measurement.As money on its own cannot earn money, a link has to beintroduced between money and profit as an alternative tointerest. It is against this backdrop that Islamic banking hasbeen primarily involved in trading, leasing and fee‑basedtransaction as well as investment activities. Those involved inIslamic banking are not in a position to either borrow or lendmoney for interest. Subsequently, the nature of the Islamicbanker‑customer relationship varies according to the differentcontracts that Islamic banks and their customers enter into.2.1.1 ISLAMIC BANKING – THE RELATIONSHIP BETWEENTHE USER AND THE SUPPLIER OF FUNDSThe relationship of the bank with the suppliers of funds canbe that of agent and principal, depositor and custodian,DEPOSIT/LIABILITY: CONTRACTUAL RELATIONSHIPCONVENTIONAL BANKINGISLAMIC BANKINGFailure to maximise the benefits of our strategicpartnershipsDepositor‑custodian relationshipLender‑borrower relationship (but free from interest)Investor‑entrepreneur relationshipFINANCING/ASSET: CONTRACTUAL RELATIONSHIPCONVENTIONAL BANKINGISLAMIC BANKINGPurchaser‑seller relationshipFailure to maximise the benefits of our strategicpartnershipsLessee‑lessor relationshipPrincipal‑agent relationshipEntrepreneur‑investor relationship

893. THE SALIENT FEATURES OF ISLAMIC FINANCEinvestor and entrepreneur as well as that characterisingfellow partners in a joint investment project. Similarly, therelationship of the bank with the users of funds can consistthat of vendor and purchaser, investor and entrepreneur,principal and agent, lessor and lessee, transferor andtransferee, and between partners in a business venture. This isin sharp contrast to that of conventional banking, which issimply a lender‑borrower relationship.The difference in relationships between Islamic andconventional banks is demonstrated in the following table:The below illustrates that Islamic banking has departedfrom the concept of loans to use other contracts which arecompliant and free from the element of interest in bothdeposit taking and finance provision.2.2 TAKAFUL – ISLAMIC INSURANCEWith regards to Islamic insurance, better known as Takaful,the insurer, that is the insurance company, is prohibitedfrom providing indemnity to the insured, that is, thepolicyholders, as this is not acceptable in Shari’ah principles.This is because both the premium paid by policyholders andthe indemnity paid by the insurer are uncertain andtherefore not permissible as they contain the element ofuncertainty or Gharar.Conventional life insurance companies are profit-seekingentities and need to allow for things like average lifeexpectancy and high-risk customers when setting theirpremiums in order to ensure that they profits from offeringlife insurance to its customers.Takaful introduces the contract of donation among theparticipants/policyholders as a substitute for the contract ofsale of indemnity for a premium as practiced in conventionalinsurance. This is to make uncertainty irrelevant financially,because in Islamic te

1.1 ISLAMIC TRADITION The essence of Islam is that it derives its principles and values from the Qur’an and the Traditions of the Prophet Muhammad. The history of Islamic law begins with the revelation of the Qur’an which contains legal principles and injunctions dealing with subjects such as ritual, marriage, divorce, succession, commercial transactions and penal laws. In contrast, the .

Finance Vision and Organisation: At a glance - PwC

A review of Islamic Traditional and Contemporary Dwellings .