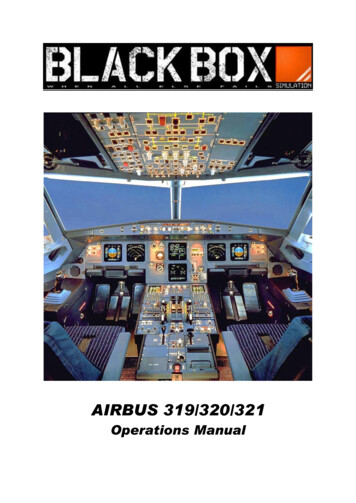 A320 OPERATIONS MANUALBEFORE STARTINGHI DEFINITION TEXTURESFor the full benefit of Hi Definition texturing It is recommended you add the following line toyour FSX.CFG fileTexturemaxload 4096You will find the file in OYSTICK THROTTLE CALIBRATIONWhen you first load the airbus you will need to calibrate your joystick throttle to allowproper use of the thrust lever detents.1. To do this open the MCDU from the menu, and press the MCDU MENU button2. Press the Input Calibration button on LSK R3 (line select key right 3)3. Select whether you have 1 or 2 throttle levers on your Joystick. LSK R54. Set MINIMUM Throttle on your joystick and then note the number that is displayed beloweitherTHROTTLE AXIS for single throttle modeorENG1(2) THROT AXIS for dual throttle mode. 1 or 2 depending on which of the dual throttlesyou are moving.5. Enter this number into the green INPUT MIN Box using the MCDU Keypad6. Set MAXIMUM Throttle on your joystick and note the number displayed as in step 47. Enter this number into the green INPUT MAX Box using the MCDU keypad8. These setting will be saved so should not need recalibratingFOR FLIGHT SIMULATION USE ONLYCOCKPIT FAMILIARISATIONNote: This does not currently support separate calibration for 1 & 2 throttles if your min max range for both is not identical thedifferences should be so small it will not cause an issue.2

INTRODUCTIONWelcome and thank you for purchasing the A320 X’treme ‘Prologue Version’. Thepurpose of this manual is to provide you with the initial information and obtain theskills required to fly the Airbus 320. We would like point out that the Prologue version doesnot simulate all the intricate systems found on the Airbus 320 however it contains the basicsystems that makes it fly and operate like an Airbus.In the X’treme version all systems will be implemented making it the most accurate Airbusever created for flight simulation. We will also provide you with a more comprehensivemanual in order to cover all the systems and obtain all the skills required to fly the aircraftjust like the professionals.The Airbus 320 is a complex aircraft and it requires a certain degree of learning to reallyunderstand how the aircraft works. During initial test flights and operations of the realaircraft several pilots were left baffled and sometimes unable to recover from certainsituations due to the inability to understand its complex systems and automation. So we doadvise you to read through the manuals in order to fully understand and be able to fly oneof the most advanced airliners to date.What makes the aircraft so unique?The Airbus320 family consists of short to medium range, twin-engined narrow body aircraft.It consists of the A318, A319, A320 and A321. Developed as a direct competitor to Boeing’s737 and McDonnell Douglas’ MD80, the first member to be produced was actually the A320.It was launched in March 1984, first flew in February 1987, and was first delivered in 1988 toAir France. The family was soon extended to include the A321 (first delivered 1994), theA319 (1996), and the A318 (2003).Customers have the option to choose between two power plants, either the CFM56 or theIAE V2500 engine. The A318 is powered by Pratt and Whitney’s PW6000 engines.What made the aircraft so different and unique from other airliners was that it was the firstairliner to have a fly-by-wire (FBW) system implemented. One other unique feature was theelimination of the control column and replaced by what is known as a side stick.The FBW system replaced the conventional system of cables and hydraulics. In aconventional aircraft when the pilot moves the yoke or stick or the rudder pedals, thisdirectly manipulates cables that displace the control surfaces. This is still used effectively onlight aircraft however on airliners since the control surfaces are bigger it requires a greatereffort from the pilot to operate, so the hydraulic system is used instead.

A320 OPERATIONS MANUALWith FBW the aircraft is controlled through computers sensors. The sensors determine theamount of deflection, or movement, needed in the control surfaces (using data such asairplane altitude and airspeed) and send this information to hydraulic actuators which thenmove the ailerons, elevators and rudder. The system is controlled by five dedicatedcomputers and operates all the primary and secondary flight controls by a combination ofelectronic signalling and hydraulic jacks. Very high safety standards have been built into theflight control systems, with system redundancy and with flight envelope protection, whichwill not allow manoeuvres to exceed the aircraft’s structural and aerodynamic limitations.One other feature is that all aircraft in the A320 family including even the larger A330 andA340 all share the same cockpit layout which makes it easier for pilots to transition fromone aircraft to another, thus saving time and money for airline companies.COCKPIT FAMILIARISATIONToday, the A320 has become Airbus Industrie’s best selling aircraft, with well over 8,000aircraft ordered. Out of these a total of 5010 have been delivered.FOR FLIGHT SIMULATION USE ONLY7

A319/320/321 OPERATIONS MANUALOVERHEAD PANELThe overhead panel is split into two zones the Forward zone and the Aft zone.Forward Zone:- front of the panel is for most frequently used functions- for system controls which is arrange

A320 OPERATIONS MANUAL FOR FLIGHT SIMULATION USE ONLY ION 2 BEFORE STARTING HI DEFINITION TEXTURES For the full benefit of Hi Definition texturing It is recommended you add the following line to your FSX.CFG file Texturemaxload 4096 You will find the file in c:\users\username\appdata\roaming\micrsosoft\fsx\ JOYSTICK THROTTLE CALIBRATION When you

HOW TO USE THIS MANUAL - Warranty Flat Rate Manual