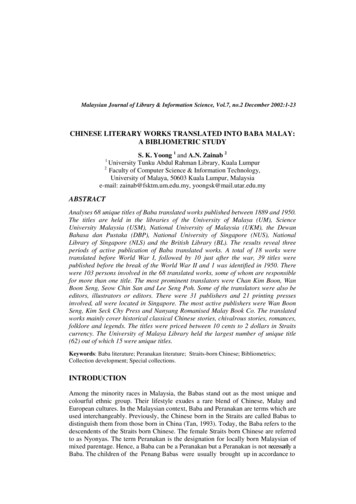 Malaysian Journal of Library & Information Science, Vol.7, no.2 December 2002:1-23CHINESE LITERARY WORKS TRANSLATED INTO BABA MALAY:A BIBLIOMETRIC STUDYS. K. Yoong 1 and A.N. Zainab 2University Tunku Abdul Rahman Library, Kuala Lumpur2Faculty of Computer Science & Information Technology,University of Malaya, 50603 Kuala Lumpur, Malaysiae-mail: [email protected], [email protected] 68 unique titles of Baba translated works published between 1889 and 1950.The titles are held in the libraries of the University of Malaya (UM), ScienceUniversity Malaysia (USM), National University of Malaysia (UKM), the DewanBahasa dan Pustaka (DBP), National University of Singapore (NUS), NationalLibrary of Singapore (NLS) and the British Library (BL). The results reveal threeperiods of active publication of Baba translated works. A total of 18 works weretranslated before World War I, followed by 10 just after the war, 39 titles werepublished before the break of the World War II and 1 was identified in 1950. Therewere 103 persons involved in the 68 translated works, some of whom are responsiblefor more than one title. The most prominent translators were Chan Kim Boon, WanBoon Seng, Seow Chin San and Lee Seng Poh. Some of the translators were also beeditors, illustrators or editors. There were 31 publishers and 21 printing pressesinvolved, all were located in Singapore. The most active publishers were Wan BoonSeng, Kim Seck Chy Press and Nanyang Romanised Malay Book Co. The translatedworks mainly cover historical classical Chinese stories, chivalrous stories, romances,folklore and legends. The titles were priced between 10 cents to 2 dollars in Straitscurrency. The University of Malaya Library held the largest number of unique title(62) out of which 15 were unique titles.Keywords: Baba literature; Peranakan literature; Straits-born Chinese; Bibliometrics;Collection development; Special collections.INTRODUCTIONAmong the minority races in Malaysia, the Babas stand out as the most unique andcolourful ethnic group. Their lifestyle exudes a rare blend of Chinese, Malay andEuropean cultures. In the Malaysian context, Baba and Peranakan are terms which areused interchangeably. Previously, the Chinese born in the Straits are called Babas todistinguish them from those born in China (Tan, 1993). Today, the Baba refers to thedescendents of the Straits born Chinese. The female Straits born Chinese are referredto as Nyonyas. The term Peranakan is the designation for locally born Malaysian ofmixed parentage. Hence, a Baba can be a Peranakan but a Peranakan is not necessarily aBaba. The children of the Penang Babas were usually brought up in accordance to

Yoong, S.K. & Zainab A.N.their father’s ways, even when their fathers died young and the children were leftwith their local mothers. The children of the Malacca Babas were more influenced bytheir mothers, and as the Malays were the majority ethnic composition in Malacca,the influence of the Malay culture is definitely stronger. This dominance influencedthe language spoken and the literary orientations. The Malacca Babas speak in aMalay accent juxtaposed with Chinese words, whereas the Penang Babas speakHokkien interspersed with Malay words. In the context of this article, the word Babadenotes the Malacca and the Singaporean Babas.Because of their mixed cultural background, the Babas exhibited unique culturalcharacteristics in their traditional costumes, daily attires, culinary skills, buildingstyles, language and literature. The Baba language is colloquial Malay, used as atrading language, juxtaposed by words of Chinese origin for unfamiliar Malay words(Shellabear, 1913). As such, the literary works produced were based on this spokenlanguage. Shellabear (1913) and Png (1963) compiled lists of Baba Malayvocabularies, and the latter found 350 known Chinese loan words and the proportionof such words was estimated to be about 10 percent. Gwee (1993) provided a morerecent compilation of words, phrases, sayings and idiomatic expressions from theBaba language. The Baba language was popular because it was the trading languageand the Lingua franca of the Straits Settlements.The Babas were pioneers among the Chinese to publish in the romanised Malaylanguage. They were actively involved in publishing newspapers, magazines, andbooks and translated Chinese stories. The Babas published their first romanisednewspapers in 1894 (Straits Chinese Herald also known as Surat Khabar Peranakan).Other newspapers they published include Bintang Timor (1894), Kabar Slalu alsoknown as Daily News in 1924, Kabar Uchapan Baru or Eastern Weekly Review in1926. The Bintang Timor published a serial entitled Hikayat Percintaan Si Putih [Thelove story of Si Puteh] (Teo, 1980). The Babas also published magazines and the firstromanised Malay weekly was Bintang Pranakan (1930). It was in this magazine thatsome of the Chinese stories were published, which were later published in volumes.One such example was Ow Liat Kok Chee, translated by Seng and San. Anotherweekly, Sri Pranakan was published in 1932 and this magazine published theChinese story, Yeo Boon Kong Cheng Lam Ban, translated by Seng and San, whichwas later published in four volumes. The Babas also published the Story Teller (1935)and this magazine published the Chinese story of Beng Leh Koon translated by KhooPeng Yam. Hence, the Baba newspapers and periodicals contribute to the developmentof Baba literary works by publishing original and translated Chinese stories.OBJECTIVE AND METHODOLOGYThis article attempts to bibliometrically analyse a compiled list of Baba translationwork. The translated works are stories from Chinese classics in romanised Malay. In2

Chinese Literary Works Translated into Baba Malay: a Bibliometric Studyorder to undertake the bibliometric analysis, a list of published Baba translated workswas first compiled. Identification of such titles were made by searching the OnlinePublic Access Catalogue (OPAC), of the University of Malaya Library (UML),Library of the Dewan Bahasa dan Pustaka (DBP), Science University of Malaysia(USM), National University of Malaysia (UKM), National University of Singapore(NUS), National Library of Singapore (NLS) and the British Library (BL). Thecollections were physically examined at the various locations. The analyses weremade based on 68 identified unique titles. For each title the publications wereexamined in terms of the (a) the persons involved (translators, editors, illustrators,readers and helpers); (b) The publishers and printing presses; (c) the subject contentsof the translated works (folklore, romances, chivalrous stories, legends and historicalstories); (d) the physical condition of the book; and (e) the location of each titles.RESULTSTotal Translated Works IdentifiedThrough the OPAC search of seven libraries, 68 unique titles are identified. This listmight not reflect the actual unique titles being published and held in privatecollections. Figure 1 reveals three periods of active publication of Baba translatedworks. It is evident that World War years have affected the publication trend. A totalof 18 works were translated before World War I, followed by 10 just after the war.The most active period was during the 1930s before the break of the World War II,where more than fifty percent of the translated works were published (39 out of 68titles). The titles are listed under their uniform titles as several versions of the samestory may be published between 1889 to 1950.Figure 1: Baba Translated Works 1894 189003 194921930-1934551925-1929541920-1924103

Chinese Literary Works Translated into Baba Malay: a Bibliometric StudyKhiang Tai KongCheng Tiong Suat GakChay Kong Wak HoodKhian Leong Koon Yew Kang LamLek Boh TanNah Kong Tong Pak HanSam Hap Beng Choo PokiamTeck Cheng Cheng PakTian Pah TorOng Cheow Koon Hoe HuanChow Thau Hong Boo KoonFlying SwordsIt Ki Mui/Chit Kiam Chapsahnh KiapIt Ki Mui/Chit Chu Chapsahnh SengTio Kong InnLam Koon Ong Soon PinIt ki Mui Peng Suanh ChatSam Kok InnCheong Moh InnTai Lau Sam Boon -19391939YearTitlesYear(s) Published1950Botan Kiongchoo1950Persons InvolvedThe persons involved refer to the translators, illustrators, editors, Chinese andromanised Malay readers and the helpers. Most of the translated works weretranslated from popular Chinese fiction and the authors of these original works cannotbe traced. The translations were written by someone who had listened from astoryteller (Teo, 1980). In the context of this article, the translators are given moreattention than the other roles. In most translated works, the editors coordinated thetranslators, illustrators and edited the stories in terms of sentence structure andspelling. Illustrators were seldom mentioned in the books and could only beascertained from names indicated beside printed illustrations. The Chinese readerswere those who understood and read the Chinese story to the translator or the helper.The Romanised Malay readers were bilingual, who were usually illiterate andinterpreted the Chinese stories into Baba Malay language for the translators. Thehelpers usually assisted and read to the translators.There were 103 persons involved in the 68 translated works, some of whom wereresponsible for more than one title (Table 1). The translators were mentioned in mosttitles, since they were the key persons in the translation process. Other personsmentioned mainly assisted the translators. Hence, those translators who worked withassistants tended to be more productive. From the 68 titles 28 names were identifiedand the authors for two translated titles cannot be ascertained.The most prolific translator was Wan Boon Seng who used the pseudonym of PanahPranakan. He alone translated 21 titles between 1930 and 1939 and translated BotanKingchoo in 1950. This title is also the last translation work that can be traced. Wan5

Chinese Literary Works Translated into Baba Malay: a Bibliometric StudyChan Kim Boon was also known as Batu Gantong and was born in Batu Gantong,Penang in 1851. He was popular between 1889-1909. He stood out among othertranslators because of his translation of three popular Chinese classics, Sam Kok (30volumes in 1892-1896), Song Kang (19 volumes in 1899-1902 and Kou Chey Thian(9 volumes between 1911-1913). Sam Kok was translated from the Luo GuangZhong’s Romance of theThree Kingdoms and Song Kang was translated from ShiNai An’s Water Margin. The other titles translated were Hong Keow (1981; 18921893), Gnoh Bee Yean (1891-1892), Pho Kiu Si (1913) and Kou Chey Thian orJourney to the West (1911-1912). According to an announcement in Sam Kok (15December 1892), Chan promised to translate 14 other titles. However, only SongKang and Chey Thian Hoey Sion (which was later changed to Kou Chey Thian, 19111912) could be traced. He died in 1920.Tan Beng Teck was responsible for one of the earliest translation work, Heng GuanSeo Chia (1889), Hong Keow (1889), Kim Ko Kee Quan (1889) and Lwee Hong Thak(1889). After 1889 he did not translate further works. According to Tan (1993), BengTeck left for Japan after publishing the three volumes. It was Chan Kim Boon whocontinued the translatio

love story of Si Puteh] (Teo, 1980). The Babas also published magazines and the first romanised Malay weekly was Bintang Pranakan (1930). It was in this magazine that some of the Chinese stories were published, which were later published in volumes. One such example was Ow Liat Kok Chee, translated by Seng and San. Another

Understanding the Immune System: How it works

The Investigation into the Rising Cost of Textbooks

100 ways to support - Research Into Recovery

AT MOPAR TURN CARS INTO