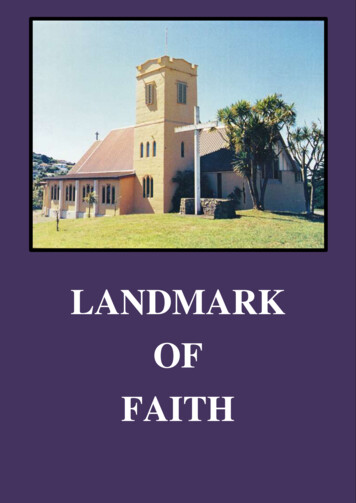 INDEX OF LINE DRAWINGS IN THIS BOOKLET WHICHILLUSTRATE ITEMS USED AT ST. JOHN'SPage 1Brass processional cross carried into the Sanctuary at St. John's ahead of choir, clergy andleaders, at the commencement of services.Page 8The oak altar built in 1990.Page 12The stone font with wooden cover and brass jug. The letters IHS carved into the stone arethe Greek first letters of the name "Jesus".Page 17Page 27Gaye.The carved oak lectern to be found in front of the Nave.The silver chalice presented by Eric and Isla Norris in memory of their daughterPage 28The cross with the Greek letters "alpha- and "omega" in the east windowPage 3lRay Hill.The silver ciborium contains the bread at Holy Communion, purchased in memory of Mr.Page 40the Nave.A group of flags owned by the local Scout and Guide movement to be found at the rear ofThe above sketches, except those on pages 8 & 28, were drawn by Trevor Lawrence.Page 4

FOREWORDThis year 1997 St. John's is celebrating 150 years of life and worship in the Johnsonvillecommunity. Who would have thought that Johnsonville would have grown to becomethe vibrant community it now is?The foresight of early church pioneers to build a church on a prominent section of landhas meant that St. John's has always been a visual presence in the community. TheScriptures record Jesus' saying; 'a city built on a hill cannot be hid.' This could wellapply to St. John's. This history is a book about church and community, as St. John'schurch over the years has sought to be a presence in this district. The struggles ofministry and the setbacks are recorded along with the times of celebration. The churchof the final years of the twentieth century has also a vision for the future. Despite livingin a perceived secular community, people find 'community' in the church, and comewith a variety of needs and requests. Hence the 'light on the hill' shines undiminishedinto the future.St. John's is dedicated to an evangelist saint, bringing a commitment to offer Christianfaith and values to Johnsonville. These celebrations then not only record with gratitudethe faithful witness of the many who have been members of St. John's, but also celebratethe present, and we look to the future with excitement and anticipation of what will be.Derek LightbourneVicar of St. JohnsJune 1997Page 5

In 1847 St. John's (often known as the Hawtrey Church) was Parish Church to a very large area, indicatedapproximately on this map. Only two other Anglican Churches existed in the Wellington District: the first St.Paul's which seated 300, and a chapel in Petone seating 50.Page 6

1972 PROLOGUE AT THB 125TH ANNIVERSARYWherever British colonists settled a priority objective was a centre of worship. So it wasthat the first St. John's Church was raised when Johnsonville was little more than aclearing. It was opened by Bishop Selwyn precisely 125 years ago, on 29th July,1847.Through the years five churches have been built on the one site. The present St. John's,consecrated by Bishop Sprott on 29th July, 1922 - fifty years ago - has given the longestservice of all. For 125 years members of the St. John's family have come together intheir spiritual centre to give something of their hearts to God, to draw life from Him,and go out better equipped to love and serve. Though much of the fine line detail of St.John's history is lost, ample survives to show the faith and devotion, the trial and thevictory the sowing and the reaping, the disappointments and the joys of twelvegenerations of parishioners.The true story of St. John's is essentially a story of people. How much has been donethrough these 125 years by faithful parishioners! How much has been done for St.John'sand its Lord. Our history gives only sampling mention of clergy and wives, wardens andsynodsmen, secretaries and treasurers, vestrymen and vestrywomen, Sunday Schoolteachers and lay-readers, organists and choristers, embroiderers and church decorators;of the giving of time, abilities and money without measure; of faithful attendance atworship which, more than anything else, has given St. John's its life. Many are unsungand unremembered in our brief published history but the names of all are written in thegreat Book of Life, and St. John's continues to bear witness to them.For 50 years -the present church has been hallowed by prayer. It has a beauty of its own;we are fortunate to have St. John's. The presence of the Lord is not confined to manmade buildings, but in this church we have all that the earnest seeker can desire to helphim lift up his heart to his Lord" Yet this jubilee is an appropriate time to remindourselves that no building is more than an ornament without people. People make ahouse a home, and so it is with St. John's - people make it our spiritual home, fulfillingthe purpose for which it stands. Through the allegiance of its family, St. John's willcontinue as a centre of warmth, life and light, reflecting the spirit in which the familygathers.May this history recalling our good heritage and the love and service of so many, andGod's guiding hand, increase our appreciation and use of our lovely house of worshipand our loyalty to its Lord.L.W. PorteousVicar 1958 - 73Page 7

ACKNOWLEDGEMENTSThe first portion of this short history of St. John's covering the period from the buildingof the first church in 1847, to 1925, is the work of the Rev. John Arlidge, Vicar from1950 - 53, but I understand that much of this history was researched by his wife, amember of the well-known Hogg family of Johnsonville, whom he married while inoffice here. Only minor changes have been made to this material.The balance of this history has been researched from vestry minutes and reports, and indiscussion with members of St. John's. Particularly I would like to thank the Rev. BillPorteous, Len and Molly Stebbings, Win Stockdale, Clive and Lois Mildenhall, JeanMills, Eric and Isla Norris, and Nigel and Fiona Werry.Thanks are also due to Trevor Lawrence for his excellent pen drawings, and the OnslowHistorical Society who made photographs available from the Bob Meyer Collection andmaterial published in the "Onslow Historian". Other useful background writing has been"Up in the Hills" by Bob Meyer, and "Tawa Flat and the Old Porirua Road" by ArthurCarman. I am grateful to Michael Steer for editing the work; my wife Perdita for typingand advising; Bob Mackley and his son Gary for photography; and Charles Wilkinsonfor his expertise, help and enthusiasm for the project.Jim Bentall, ANZIAJune 1997.Page 8

CHAPTER 1: EARLY DAYS 1847 - 1855“How shall we sing the Lord’s song in a strange land?”(Psalm 137, verse 4)The name "Johnsonville" seems to have sprung from the fact that a man named Johnson was one of the firstsettlers here and the site originally appears to have been called "Johnson's Clearing". A diary kept by twoBritish Officers on their overland route from Wellington to Auckland, and which was published in the “N.Z.Spectator" on Monday, 8th August, 1846, throws light on the early use of this colloquial name forJohnsonville. The diary commences on l7th March, 1846, "started at half-past eight a.m. in the company ofRev,. Mr G--- on our route to Wanganui. At about eleven arrived at Johnson's Clearing on the Porirua Road,where about forty of the militia were stationed, under the command of Captain Clifford and wereconstructing a stockade as protection to the few settlers in the neighbourhood. The raod thus far is good afterwards there is a mere bush path to Jackson's Ferry fourteen miles from Wellington at the extremity tothe Porirua Harbour.”In the forties, the first church was built and it is interesting to read an account of those early days written byEdward Jerningham Wakefield. He published a book in 1848 called by the rather grandiose title, “TheHandbook for New Zealand, consisting of the most recent information compiled for the use o

The first portion of this short history of St. John's covering the period from the building of the first church in 1847, to 1925, is the work of the Rev. John Arlidge, Vicar from 1950 - 53, but I understand that much of this history was researched by his wife, a member of the well-known Hogg family of Johnsonville, whom he married while in

Faith Pre-Conference: The Role of Faith Communities in FP . - CCIH

A Publication of the Sierra Curtis Neighborhood Association

Brought to You by Free-Ebooks-Canada