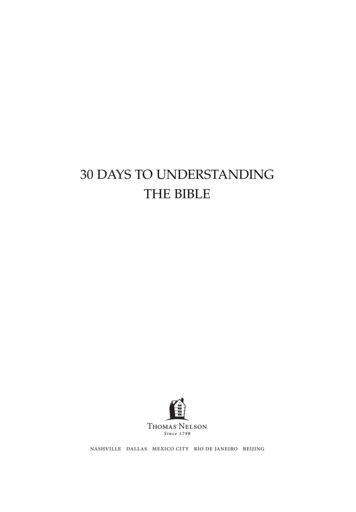 INTRODUCTIONLET’S MAKE A BARGAIN.If you’ll give me fifteen minutes a day for thirty days, I’ll giveyou an understanding of the Bible, the most widely distributed publication in history (approximately four billion copies). In one month,you’ll learn the story of the entire Bible all the major men and women,all the major events, andall the major points of geography.You will be able to put these people and facts together in theirproper chronological order and trace the geographical movement asyou think your way through the entire Bible!Yet the Bible is more than history. It is a treasure-house of important teachings that have been the foundation of Western civilizationfrom the Roman Empire until today, including important and profound ideas which have been embraced by Christians for the last2,000 years. You will learn about the Ten Great Subjects of the Bible:BibleGodJesusHoly SpiritAngelsManSinSalvationChurchFuture ThingsNo attempt has been made to interpret the Bible. The information is presented at face value as it is found in Scripture. No previous knowledge is assumed. A beginner will not be overwhelmed,and the established student will find much help organizing andexpanding what he or she already knows.The Bible is an enormous book covering much information andmany subjects. It is not possible to learn everything about it in thirty7

30 DAYS TO UNDERSTANDING THE BIBLEdays. But you can gain a beginning knowledge, an overview, that youcan use to build a more complete understanding in the years ahead.In just fifteen minutes a day for thirty days, you can gain a foundational grasp of the most important book ever written.8

CHAPTER ONETHE STRUCTUREBIBLEOF THECHARLES STEINMETZ WAS AN ELECTRICAL ENGINEER OF towering intellect. After he retired, he was asked by a majorappliance manufacturer to locate a malfunction in theirelectrical equipment. None of the manufacturer’s expertshad been able to locate the problem. Steinmetz spent some time walking around and testing the various parts of the machine complex.Finally, he took out of his pocket a piece of chalk and marked an X ona particular part of one machine. The manufacturer’s people disassembled the machine, discovering to their amazement that the defectlay precisely where Steinmetz’s chalk mark was located.Some days later, the manufacturer received a bill from Steinmetzfor ten thousand dollars. They protested the amount and asked himto itemize it. He sent back an itemized bill:Making one chalk mark 1Knowing where to place it 9,999If you know where the chalk marks go, the most overwhelmingtasks are easily solved. If you don’t, even simple tasks can beimpossible.Learning about the Bible can be much the same. If you don’tknow much about it, it can be like trying to cross the Sahara Desertblindfolded. Yet if you learn where a few of the major chalk marksgo, the Bible can be at the very least an interesting and valuablesource of information and inspiration.My own experience bears this out. Many years ago, I decided Iwas going to master the Bible. I was going to begin with Genesisand read through Revelation, and I wasn’t going to put it down11

30 DAYS TO UNDERSTANDING THE BIBLEuntil I understood it. I soon became hopelessly entangled in a jungle of fantastic stories, unpronounceable names, broken plots, unanswered questions, and endless genealogies. I stubbed my toe onLeviticus, sprained my ankle on Job, hit my head on Ecclesiastes,and fell headlong into the mud on Habakkuk.I was defeated. I threw my Bible down, concluding that the Biblewas a series of unrelated stories put together in random order!Then one day I discovered a key. With this key, the fog thatenshrouded my understanding of the Bible began to lift. Not thatthings came into sharp focus, but at least I began to see shapes on thehorizon.The key: Learning the structure of the Bible. If you want to learnarchitecture, you must first learn how buildings are put together. Ifyou want to learn sailing, you must first learn how ships are puttogether. And if you want to learn to understand the Bible, you mustfirst learn how the Bible is put together.THE OLD AND NEW TESTAMENTSThe Bible has two major divisions: the Old Testament and theNew Testament. The Old Testament begins with creation and tellsthe story of the Jewish people up to the time of Christ. It is made upof thirty-nine individual “books” (the Book of Genesis, the Book ofExodus, etc.) written by twenty-eight different authors and spans aperiod of over two thousand years.The New Testament is the record of the birth of Jesus, His lifeand ministry, and the ministry of His disciples, which was carriedon after Jesus was crucified. The New Testament is composed oftwenty-seven books written by nine different authors and covers atime period of less than one hundred years. The total number ofbooks in the entire Bible is sixty-six.SELF-TESTHow many?books in the Old Testamentbooks in the New Testamentbooks in the whole Bible12

30 DAYS TO UNDERSTANDING THE BIBLEIf you know what kind of book you are reading, then you willknow what kind of information to expect, and you can easily followthe logical flow of the Old Testament!In the Old Testament:. . . the first seventeen books are historical,. . . the next five books are poetical, and. . . the next seventeen books are prophetical!THE THREE KINDS OF BOOKS IN THE OLD sLeviticusNumbersDeuteronomyJoshuaJudgesRuth1 Samuel2 Samuel1 Kings2 Kings1 Chronicles2 siastesSong of ggaiZechariahMalachiIf you want to read the story of the Hebrew nation in the OldTestament, you must read the first seventeen books. These bookscompose a historical time line for the nation of Israel.If you want to read the poetry of Israel, you must read the nextfive books of the Old Testament.If you want to read about the prophecy of Israel, you must readthe final seventeen books.This is somewhat oversimplified, because there is some poetryin the Historical Books, and some history in the Prophetical Books,etc. The point is, however, that each of the books fits into a primary14

THE STRUCTURE OF THE BIBLEcategory. If you keep this structure in mind, the Old Testament willbegin to take shape for you.My mistake was in assuming that the whole Old Testament was onelong, unbroken story and that the history would flow evenly and consistently out of one book into the next until they were all finished. Now Iknow the story line is contained in the first seventeen books.Of the seventeen Historical Books, eleven are primary HistoricalBooks and six are secondary Historical Books. The history of Israel isadvanced in the eleven primary books and repeated or amplified inthe six secondary books. The Poetical and Prophetical Books werewritten during the time period that is constructed in the first seventeen books.Let’s take a look at the historical time line of the Old Testamentin chart form:TIME LINE OF THE OLD TESTAMENT15

30 DAYS TO UNDERSTANDING THE BIBLEAs you can see, Job was written during the time period of theBook of Genesis, and Psalms during the time of 2 Samuel, whileProverbs, Ecclesiastes, and Song of Solomon were written duringthe time of 1 Kings, and so on.To use an analogy, we constructed a similar chart for U.S. history. Imagine that you read an American history book for the mainstory line. The history book would give you the major periods inU.S. history. Some of these periods might be associated with a majorpoet or writer and a major philosopher. The poets would correspond to the poets of Israel, and the philosophers would correspondto the biblical prophets.TIME LINE OF U.S. HISTORYTHE NEW TESTAMENTOf the twenty-seven books of the New Testament, there are alsothree different kinds of books: Historical Books, Pauline Epistles, andGeneral Epistles. The Historical Books are the four Gospels and theActs of the Apostles. The Epistles were letters written to variousindividuals and church congregations. The Pauline Epistles wereletters written by the apostle Paul. The General Epistles were letterswritten to individuals and congregations by a number of differentpeople, hence the rather generic name General Epistles. The primary content in all the Epistles is instruction on Christian doctrineand lifestyle.16

THE STRUCTURE OF THE BIBLEWhat kind of infor

all the major events, and all the major points of geography. You will be able to put these people and facts together in their proper chronological order and trace the geographical movement as you think your way through the entire Bible! Yet the Bible is more than history. It is a treasure-house of impor-