Lifting The Lid On Loot-Boxes - BeGambleAware 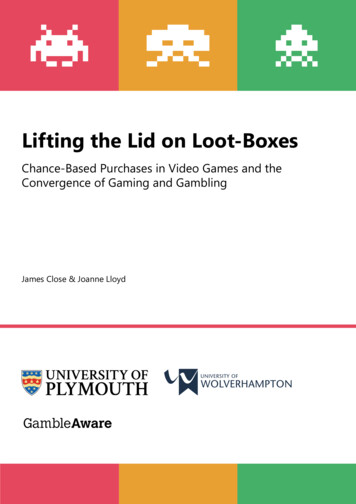 Lifting the Lid on Loot-BoxesChance-Based Purchases in Video Games and theConvergence of Gaming and GamblingDr James CloseSenior Research Fellow. Faculty of Health, University of [email protected] Joanne LloydSenior Lecturer in Psychology. Faculty of Education Health & Wellbeing, University of [email protected] BY:Gamble AwarePennine Place, 2a Charing Cross Rd, London WC2H 0HFbegambleaware.orgAcknowledgements and disclaimer. This project was funded by GambleAware. The views expressedin this publication are those of the authors alone and not necessarily those of GambleAware. The fullresearch team, all of whom contributed to the Gamble-Aware funded research that informed thisdocument, are: Dr Helen Lloyd, Dr James Close, Dr Oliver Smith and Dr Stuart Spicer (University ofPlymouth); Dr Joanne Lloyd, Dr Laura Louise Nicklin, Dr Chris Fullwood and Prof Maria Uther (Universityof Wolverhampton); Dr Chris Stiff (University of Keele); Dr Thomas Raymen (Northumbria University) andDr Jonathan Parke (Sophro Ltd.).Copyright notice. The author acknowledges that the copyright of all images and screenshots of videogames used in this paper are retained by their respective copyright holders. The author uses thesecopyrighted materials either under licence or for the purposes of research, criticism or review under thefair dealing provisions of copyright law in accordance with Sections 29(1) and 30(1) of the UK Copyright,Designs and Patents Act 1988.

Executive SummaryExecutive Summary1. Introduction & BackgroundLoot boxes are purchasable video game content with randomised rewards. Due to structural andpsychological similarities with gambling, they have come under increasing media, academic and legalscrutiny. The UK government is currently reviewing evidence on loot boxes, which will be consideredin the forthcoming review of the Gambling Act 2005.In January 2020, we were commissioned by GambleAware to conduct a package of research intoloot boxes. This interdisciplinary collaboration between the University of Wolverhampton and theUniversity of Plymouth draws from our backgrounds in gambling, gaming, psychology and healthcare.It aims to inform future UK policy on loot boxes with a robust, evidence-based approach.The goals of our project are to investigate the psychological profiles of young people and adults whobuy loot boxes, studying their purchasing motivations, and any links with potential harms. These couldinclude unsustainable spending, lower wellbeing, problem gambling and problem video gaming.The first section of this document, Introduction and background, presents a primer on loot boxes,revealing how they evolved from Asian ‘free to play’ games, before diversifying into every availablegenre, including many big-budget ‘AAA’ titles. This is followed by subsequent sections (summarisedbelow) that present our emerging findings, contextualised within the current evidence around lootboxes, before concluding with implications for future policy.Key Questions What evidence is there for links between loot boxes and problem gaming or gambling?What are the player motivations for loot box purchasing?Does loot-box purchasing lead to harm, financial or otherwise?Are any groups, such as young people or children, particularly at risk?If so, what can be done about it?Lifting the Lid on Loot Boxes - Chance-based purchases in videogames and the convergence of gaming and gambling1

Executive Summary2. Loot boxes, Problem Gambling and Problem Video GamingOne of the most influential academic publications on loot boxes was a 2018 survey of gamers bythe UK researchers David Zendle and Paul Cairns1. This identified an association between loot boxpurchasing and problem gambling scores, as measured by the Problem Gambling Severity Index(PGSI). Similar surveys soon followed, prompting us to carry out a systematic review establishingtheir robustness, reproducibility and effect sizes. Our review demonstrates that relationships betweenloot box engagement and problem gambling have been robustly verified in around a dozen studies.These draw from various nationalities and cohorts, and now include pre-registered and nationallyrepresentative samples.The effect sizes are ‘moderate’ – a magnitude which bears statistical and practical relevance: they arestronger than or comparable with well-established associations between problem gambling and otherco-morbidities, such as depression, alcohol and drug dependencies. Similar relationships have beenestablished with problem video gaming.3. Motivations for purchaseRelationships between loot box engagement and problematic gambling are now well demonstrated,but they tell us nothing about the underlying motivations for purchase in the first place. At themoment, there has been almost no academic literature published about the motivations for loot boxpurchasing. This contrasts with gambling research, where we know gambling is driven by a multitudeof overlapping motivations.Without similar information about loot boxes, it is difficult to understand the mechanisms via whichany harms might manifest. We therefore conducted a series of in-depth interviews with a diversesample of regular loot box purchasers from across the UK.This revealed that motivations for loot box purchasing are embedded within a network of personal,social and gameplay factors, and often overlap with motivations for purchasing other, nonrandomised in-game content (although there is typically more excitement associated with winning anitem within a loot box than with buying it from the in-game store).Such motivations include both social interactions (such as gaining status and approval, or as part ofa group experience) and game-related motivations (such as improving performance, aesthetics orgameplay experience).Participants also purchased loot boxes because of a ‘fear of missing out’ either socially (e.g. on sharedexperiences around ‘unboxing’), financially (on promotions) or acquisitively (on items that are onlyavailable for a limited time). Within the cyberpsychological literature, ‘fear of missing out’ (abbreviatedto FoMO), typically refers specifically to anxiety about missing out on social (or social media)interactions whilst offline. Here, we define loot box-related ‘fear of missing out’ as the range of thingsour participants worried about missing if they did not engage with loot boxes.Furthermore, players are often nudged towards purchasing via a number of well-known psychologicaltechniques, such as endowment effects (by giving away ‘free’ loot boxes, but then charging foropening), price anchoring, special limited-time offers or items, and obfuscation of costs (i.e. viain-game currencies). Developers have openly discussed such approaches, where loot boxes (withtheir gambling-like structure) are just one architectural choice from a psychological playbook ofmonetisation strategies.Lifting the Lid on Loot Boxes - Chance-based purchases in videogames and the convergence of gaming and gambling2

Executive SummaryOur observations also highlight that the concept of ‘value’ extends beyond the legal ‘money’sworth’ definition. Instead, prized items in loot boxes can hold significant social or psychologicalcapital. Nonetheless, many gamers do ascribe discrete financial values to loot box contents – basedon purchase or resale price – suggesting that many loot boxes meet existing criteria for gamblingregulation.4. Problematic play? Loot boxes, financial harm and psychological harmTo investigate notions of financial harm, we conducted a secondary analysis of six open accessdatasets of loot box surveys, aggregating the freely available data2. The combined dataset comprisedof 7,767 loot box purchasers, and our analysis established that a disproportionate amount of revenueis derived from high-level spenders. For example, around 5% of loot box purchasers in our dataset(those spending more than around 70 / 100 per month, or local equivalent) generate around half ofindustry revenue from loot boxes. Moreover, almost one third of these top 5% of spenders fall into the‘problem gambler’ category.Conversely, there is no evidence that higher loot box spend is correlated with higher earnings. Ourresearch therefore demonstrates that games developers, unwittingly or not, appear to be generatingoutsized loot box profits from at-risk individuals (these are likely to include both people withgambling problems or problematic patterns of video gaming) – but not from wealthy gamers.At present, there is a paucity of evidence investigating links between loot box engagement andwellbeing or psychological distress. Any preliminary evidence has been cautiously interpreted, withmixed results. However, harms associated with loot boxes (either financial or psychological) areliable to have a disproportionate effect on specific cohorts of gamers. We present data from our ownbrief screen of around 14,000 UK gamers, which confirms that loot box engagement is linked with anumber of demographic factors including male sex, younger age, and lower educational attainment.5. Loot box defences, industry self-regulation and previouspolicy responsesWe note that a chorus of voices are calling for the UK to legislate loot boxes as gambling, includingacademic researchers3,4, the Department for Digital, Culture, Media and Sport (DCMS)5, the House ofLords Gambling Committee6, a number of influential charities7,8, and over 40,000 signatories of a recentpetition to the government9. There have been a number of responses to these growing calls for policyaction.First, there have been a series of arguments rallied in defence of loot boxes as an unproblematic,non-gambling activity. For example, loot boxes have been compared with earlier, unfounded videogame-related moral panics, such as links between video gaming and violence. However, these earliercontroversies were based on questionable, unrepeated evidence – which contrasts markedly with theloot box evidence. Loot boxes have also been defended as ‘surprise mechanics’ – no different, forexample, to a Kinder Egg. Such arguments, however, do not tally with well-established associationsbetween loot boxes and problematic gambling behaviour.Second, there have been some recent attempts at industry self-regulation. However, ‘odds disclosures’of loot boxes have sometimes been presented in a confusing and incomplete manner10, and theseattempts at corporate transparency remain opaque. Similarly, game labelling for loot boxes currentlyLifting the Lid on Loot Boxes - Chance-based purchases in videogames and the convergence of gaming and gambling3

Executive Summaryfall short of age restrictions, despite being regularly called for3,7,11,12. Nonetheless, age restrictions are,in any case, ignored by the majority of parents and children13,14.Third, there has been policy action on loot boxes from a number of jurisdictions, including China,Belgium and the Netherlands. However, these initial attempts to legislate loot boxes have sufferedfrom a series of shortcomings, including industry manoeuvring (i.e. to sidestep legislation) andinconsistent policy (i.e. they only mitigate risks associated with certain classes of loot boxes, such asthose with explicit ‘cash out’ features).6. Conclusions and recommendationsAny legislation regulating loot boxes will require careful consideration. Drawing from experiencesin other jurisdictions, we present a series of recommendations for future policy. Prospective policyshould include provisions for clear definitions of loot boxes, game labelling and age ratings, fulldisclosure of odds presented in an easy-to-understand way, spending limits and prices in realcurrency, and finally, obligations of gatekeepers (i.e. developers, distributors, content providers) forthe trade they enable and profit from.Finally, we conclude with a stark warning: in the rapidly evolving world of video gaming, legislationagainst loot boxes is liable to be quickly rendered anachronistic. Longer-term mitigation of risk –from the potential dangers of a broad range of psychological nudges, potentially liable to causeunsustainable levels of spending in vulnerable individuals – will require increased provision forconsumer protection, child-focused data protection policies, more research, and educational packagesthat mitigate against these dangers and harms.Lifting the Lid on Loot Boxes - Chance-based purchases in videogames and the convergence of gaming and gambling4

Lifting the Lid on Loot Boxes - Chance-based purchases in videogames and the convergence of gaming and gambling Executive Summary 1. Introduction & Background Loot boxes are purchasable video game content with randomised rewards. Due to structural and psychological similarities with gambling, they have come under increasing media, academic and legal scrutiny. The UK government is currently .