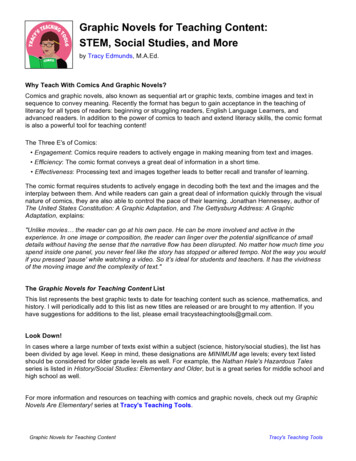 Graphic Novels for Teaching Content:STEM, Social Studies, and Moreby Tracy Edmunds, M.A.Ed.Why Teach With Comics And Graphic Novels?Comics and graphic novels, also known as sequential art or graphic texts, combine images and text insequence to convey meaning. Recently the format has begun to gain acceptance in the teaching ofliteracy for all types of readers: beginning or struggling readers, English Language Learners, andadvanced readers. In addition to the power of comics to teach and extend literacy skills, the comic formatis also a powerful tool for teaching content!The Three E's of Comics: Engagement: Comics require readers to actively engage in making meaning from text and images. Efficiency: The comic format conveys a great deal of information in a short time. Effectiveness: Processing text and images together leads to better recall and transfer of learning.The comic format requires students to actively engage in decoding both the text and the images and theinterplay between them. And while readers can gain a great deal of information quickly through the visualnature of comics, they are also able to control the pace of their learning. Jonathan Hennessey, author ofThe United States Constitution: A Graphic Adaptation, and The Gettysburg Address: A GraphicAdaptation, explains:"Unlike movies the reader can go at his own pace. He can be more involved and active in theexperience. In one image or composition, the reader can linger over the potential significance of smalldetails without having the sense that the narrative flow has been disrupted. No matter how much time youspend inside one panel, you never feel like the story has stopped or altered tempo. Not the way you wouldif you pressed 'pause' while watching a video. So it’s ideal for students and teachers. It has the vividnessof the moving image and the complexity of text."The Graphic Novels for Teaching Content ListThis list represents the best graphic texts to date for teaching content such as science, mathematics, andhistory. I will periodically add to this list as new titles are released or are brought to my attention. If youhave suggestions for additions to the list, please email [email protected] Down!In cases where a large number of texts exist within a subject (science, history/social studies), the list hasbeen divided by age level. Keep in mind, these designations are MINIMUM age levels; every text listedshould be considered for older grade levels as well. For example, the Nathan Hale's Hazardous Talesseries is listed in History/Social Studies: Elementary and Older, but is a great series for middle school andhigh school as well.For more information and resources on teaching with comics and graphic novels, check out my GraphicNovels Are Elementary! series at Tracy's Teaching Tools.Graphic Novels for Teaching ContentTracy's Teaching Tools

History/Social Studies: High School and older A.D.: New Orleans After The Deluge, by Josh Neufeld Above the Dreamless Dead: World War I in Poetry and Comics, edited by Chris Duffy Action Philosophers and Action Presidents series, by Fred Van Lente and Ryan Dunlavey Larry Gonick's Cartoon Histories of: The Universe, The Modern World, and The United States Hip Hop Family Tree series, by Ed Piskor Marathon, By Boaz Yakin and Joe Infurnari Marzi: A Memoir, by Marzena Sowa and Sylvain Savoia Northwest Passage, By Scott Chantler Photographer: Into War-Torn Afghanistan With Doctors Without Borders, by Emmanuel Guibert The 9/11 Report: A Graphic Adaptation, By Sid Jacobson and Ernie Colon The Gettysburg Address: A Graphic Adaptation, by Jonathan Hennessey & Aaron McConnell The Influencing Machine: Brooke Gladstone On The Media, by Brooke Gladstone and Josh Neufeld The Silence of Our Friends, by Mark Long, Jim Demonakos, Nate Powell The United States Constitution: A Graphic Adaptation, by Jonathan Hennessey and Aaron McConnell The Warren Commission Report: A Graphic Investigation, by Dan Mishkin, Ernie Colon, and Jerzy Drozd Trinity: A Graphic History Of The First Atomic Bomb, by Jonathan Fetter-VormGraphic Novels for Teaching ContentTracy's Teaching Tools

for Pride and Prejudice - glencoe