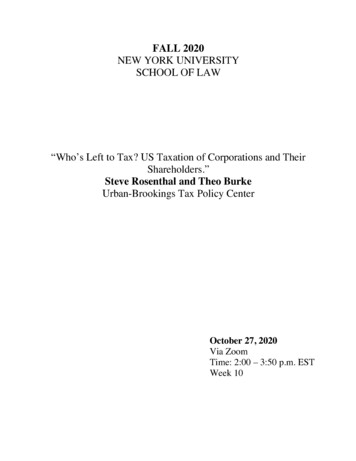 Preliminary draft (10/6/2020)Comments/suggestions welcomedWho’s left to tax? US taxation of corporations and their shareholders1I.IntroductionWe usually say that corporate earnings are subject to two levels of income tax: first,the corporation pays an income tax on earnings and, second, the shareholders pay an income tax on thedividends they receive and capital gains they realize. The story now is illusory: We tax earnings twice,but badly.A half century ago, the US corporate income tax was a major source of revenue. Since then, thecorporate tax base has eroded and, in 2017, the corporate tax rate was cut sharply from 35 to 21percent. As a result, corporate tax receipts dropped from 3.6 percent of GDP in 1965 to 1.5 percent in2017 to 1.1 percent in 2019.2 Because of the COVID-19 pandemic, and the resultant economic collapse,corporate tax receipts fell further, finishing below 0.8 percent of GDP for the fiscal year 2020, whichended on September 30 (and will finish lower still for the calendar year 2020).3Over the same half century, the shareholder tax base also dwindled. In a 2016 article, we estimatedthat US taxable accounts only held about a quarter of US portfolio stock down from almost 80 percent50 years prior.4 In a 2017 article, we estimated foreign investors held about 35 percent of US corporatestock, including both foreign direct and portfolio investments.5After the 2017 cuts in corporate tax rates, there have been calls to raise them. Most recently, forexample, former Vice President Biden proposed to raise the corporate income tax rate from 21 to 28percent.6This article updates our previous estimates of the shifting ownership of US corporate equity anddescribes continuing trends. We find that foreigners now hold about 40 percent of total US equity,retirement accounts about 30 percent, and taxable accounts about 25 percent. We then discuss theimplications of the ownership trends for tax policy, both for raising taxes on corporations and shiftingmore taxes to shareholders. Overall, we find that foreigners and the richest Americans incur the burdenof increasing corporate taxes—and reap the benefit of cutting them.1Steve Rosenthal ([email protected]) and Theo Burke ([email protected]), Urban-Brookings Tax PolicyCenter. The authors wish to thank [ ] for helpful comments. They also wish to acknowledge Lydia Austin, EvanAvila, and Erin Huffer, formerly of the Tax Policy Center, for previous research assistance. The views and mistakesherein are the authors’ and not those of the Tax Policy Center, the Urban Institute, the Brookings Institution, orany other entity or cs/taxes.4See Rosenthal and Austin, “The Dwindling Taxable Share of US corporate Stock,” Tax Notes, May 16, 2016. Seealso Burman, Clausing, and Austin, “Is US Corporate Income Double-Taxed?” 70 Natl Tax J. 675 (2017)(corroborating original estimates by Rosenthal and Austin).5See Rosenthal, “Slashing Corporate Taxes; Foreign Investors are Surprise Winners,” Tax Notes, Oct. 23, ls

II.The shifting ownership of US corporate equityIn recent years, the foreign share of US corporate equity has ballooned, as reflected in data from thefinancial accounts of the US from the Federal Reserve (the “Fed”).7 Foreigners held just 4 percent of USequity in 1986, but their share rose steadily to 11 percent by 1980, 25 percent by 2000, and 40 percenttoday.Foreigners own US corporate equity two ways: (i) foreign direct investment (“FDI”), which isvoting stock of 10 percent or more or (ii) portfolio stock for less than 10 percent of voting stock.8 Forexample, Siemens AG, a German multinational, might wholly own Siemens USA, a “direct” investment.Or the Norwegian sovereign wealth fund might own Apple stock as a portfolio investment.Both the direct and portfolio investment by foreigners in US equities increased dramatically overthe last two decades.9 And the spurts appears unrelated to changes in the US corporate tax rates.107Federal Reserve, “Financial Accounts of the United States: Flow of Funds, Balance Sheets, and IntegratedMacroeconomic Accounts, Second Quarter 2020” (Sept. 21, 2020).8Foreign direct investment in the US is the ownership or control, by a foreign person of 10 percent or more of thevoting securities of an incorporated US business enterprise or the equivalent interest in an unincorporated USbusiness enterprise. Quijano, “A Guide to BEA Statistics on Foreign Direct Investments in the United States.”Foreign investment that is not direct investment is portfolio investment9We reduce the foreign share of FDI to reflect US holdings of the foreign corporations that make the FDI. (SeeAppendix for methodology.)10Trying to isolate the effect of changes in US corporate tax rates on inbound capital flows is beyond the scope ofthis paper.2

Over the same period, US ownership of foreign stock rose at a similar clip. This growth, byspurts, in cross-border investment is just one manifestation of globalization.3

Stock that is not held by foreigners is increasingly held in tax-advantaged retirement accounts,now about 30 percent of total US equity. Retirement accounts include defined benefit (“DB”) plans (8percent of the total US equity), defined contribution (“DC”) plans (8 percent), individual retirementaccounts (“IRAs”) (12 percent), and life insurance separate accounts (3 percent), which are reserves thatfund annuity and life insurance policies.The oldest retirement plans, DB plans, started in the mid-19th century, as some employers paidemployees a percentage of their salary after disability or retirement. Today, DB plans make annuitypayments to retired workers based on years of work and earnings. To qualify under the tax rules, a DBplan can pay a maximum 235,000 annually after retirement.Both private and public employers can offer DB plans. However, over time, most privateemployers turned away from DB plans, because of their large long-term funding burdens.11 As a result,the share of US equities held by DB plans fell from a high of 22 percent in 1985 to 16 percent by 2005.The trend continued, abetted by a state and local DB plan shift from direct equity holdings to alternativeinvestments, including hedge funds, private equity funds, real estate, and commodities.12 By 2019, theshare of US equities held by DB plans had declined to 8 percent.11Bomey “It’s really over’” Corporate pensions head for extinction as nature of retirement plans changes.” USAToday (Dec. 31, 2019). 501001/12Aubry, Chen, and Munnell, “A First Look at Alternative Investments and Public Pensions,” Center for RetirementResearch at Boston College (July 2017). Curiously, the Fed counts private equity held by DB plans as direct equity,which we follow.4

Defined contributions (DC) plans permit an employer and/or its employees to make fixedcontributions to a retirement plan. The maximum combined employer and employee contribution is 57,000 annually for 2020, with an extra 6,500 “catch up” contribution by employees age 50 or over,for a total of 63,500.13 The employee owns the account and the balance in the account depends on thesize of past contributions and accumulated investment returns.DC plans grew in popularity starting in in 1980, when Congress first authorized 401(k)s. Sincethen they have remained popular and have held around 10 percent of US equity for the last fourdecades. DC plans now include 401(k) plans, similar 403(b) plans for nonprofit employees, 457(b) plansfor state and local government employees, and the federal government’s Thrift Savings Plan.Congress introduced Individual Retirement Accounts (“IRAs”) in 1978, which are like DC plans,but without an employer’s participation. IRAs, the newest category of retirement plans, grew steadily inpopularity since then and now hold 12 percent of US equity. Congress initially set the IRA contributioncap at 1,500, but it’s now 6,000 with an extra 1,000 “catch up” contribution, for a total of 7,000.The largest increase occurred in 2001, when Congress increased the limit from 2,000 to 5,000, with afive-year phase-in, and added the extra 1,000 catch-up. However, most of the growth in IRAs holdingshas been fueled by rollovers of large balances in employer plans, which is permitted upon job changes.14Life insurance companies secure their annuities for contract holders and beneficiaries withseparate accounts. Annuities are contracts that pay out a fixed or variable income stream for a setperiod or over the lifetimes of the contract holders or beneficiaries. Their holdings have shown littlechange over the period we studied.The share of holdings of US equity by the last category, taxable accounts, fell more than two-thirdsover the last half century, from about 80 percent in 1965 to 25 percent in 2019. This slide ended in 2008and flattened afterwards (as stock prices rebounded after the great recession).III.Who bears the burden of higher corporate income tax rates?Shareholders, in the short run and, mostly, in the long run, bear the burden of higher corporate taxrates. Thus, for example, shareholders would largely bear the burden of an increase in corporate incometaxes from 21 to 28 percent, as proposed by former Vice President Biden. Conversely, they previouslybenefitted from the corporate tax cuts in the Tax Cuts and Jobs ACT (“TCJA”).15In 1962, Arnold C. Harberger first modeled the dynamics of an increase in corporate taxes.16 Hedescribed how an increase in a corporate income tax initially reduces the after-tax returns for capitalinvested in the corporate sector which, later, lowers pre-tax returns for capital invested elsewhere. Thatis because the capital that is invested in the corporate sector, which is taxed more heavily, may beshifted to the non-corporate sectors, reducing returns to capital there. A corporate tax increase alsomight reduce returns to labor, as workers in the corporate sector might earn less if there were less13The maximum employee contribution is 19,500, with an extra 6,500 “catch up” of contribution by employeesage 50 or older for a total of 26,000.14Holden, Sarah, and Daniel Schrass, “The Role of IRAs in US Households’ Saving for Retirement, 2018.” ICIResearch Perspective 24, no. 10 (Dec. 2018). Available at www.ici.org/pdf/per24-10.pdf.15See Rosenthal, “Slashing Corporate Taxes: Foreign Investors are Surprise Winners.”.(2017)16Harberger, Arnold C., “The Incidence of the Corporate Income Tax,” Journal of Political Economy 70(3), (1962).5

capital for them to work with. (The reverse also would be true: a decrease in corporate taxes couldincrease returns to corporate capital and labor.)In the short run, however, shareholders bear higher corporate income taxes--and benefit from lowertaxes.17 As Harberger emphasized in 2008, “The idea always has been that the owners or shareholders ofan enterprise . . . initially bear the incidence of a new [corporate] tax wedge.”18And the short run could last a long time, as capital may shift slowly. As Alan J. Auerbach observed,“[w]hile computers can be moved from one office to another, it is considerably more difficult to turn anuclear power plant into a tractor.”19 Or as Paul Krugman explained: “One does not simply unboltmachines in other countries from the floor and roll them into America the next week.”20 Krugmansuggested the path to the long run could last decades.Moreover, long-run models generally assume only the taxation of normal returns to capital, notsupernorma

Modeling visual performance differences ‘around’ the .