The Investigation Into The Rising Cost Of Textbooks 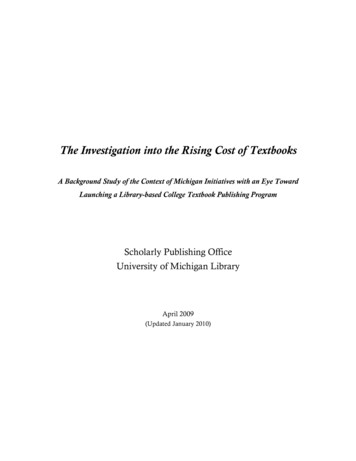 Table of Contents1.Introduction . 42.Facts Concerning the Rising Cost of College Textbooks2.1. The Nationwide Trend and the Case of Michigan. 52.2. Factors Contributing to Changes in Textbook Prices. 72.3. Other Factors Affecting the High Cost of College Textbooks. 83.A Search for Solutions: Federal, State, and Campus Level Initiatives3.1. Federal and State Governments’ Endeavors: Making New Laws as a First Step. 103.2. Campus Efforts at the University of Michigan . 134.Digital Educational Resources4.1. The Evolution of the E-book Market . 194.2. Online Textbook Initiatives for Research, Teaching, and Learning . 204.3. What are Open Access Textbooks?: From OER to OCW. 234.4. Michigan’s Engagement in OER Development . 295.Summary. 32References . 33Appendices . 37-3-

1) IntroductionIn this report we investigate the facts concerning the rapidly rising cost of college textbooks.The lack of textbook affordability has drawn increased nationwide attention over the last decade. Toidentify the reason and context behind the escalating prices of college textbooks, a number of reviewboards have been established at federal, state, and campus levels, proposing a variety of new andmore creative methods of textbook development and distribution. The University of Michigan is notan exception. This study report aims first to help us better understand the overall context of today’stextbook problem and then to tackle the questions of what choices we have today and what otheralternatives, such as open textbooks, we should further consider in order to increase productivity andefficiency of teaching for faculty as well as to provide low-cost instructional materials for students,making education and resources more affordable. This is a preliminary study to be followed by an indepth analysis that explores the potential of putting Michigan ideas into practice, includinglaunching a library-based college textbook publishing program as a new approach to textbookaffordability.-4-

2) Facts Concerning the Rising Cost of College Textbooks2.1 The Nationwide Trend and the Case of MichiganConcern over the price of textbooks has risen to the level of national outcry, drawingincreasing attention and action from public interest groups, state and federal legislatures, faculty,students, bookstores, publishers, and university leadership. According to the US GovernmentAccountability Office, college textbook prices have increased at twice the rate of inflation over the lasttwo decades (GAO 2005).Figure 1. Changes in textbook prices 1986-2004Source: GAO (2005)As Figure 1 shows, between December of 1986 and December of 2004, textbook prices have increasedat twice the rate of inflation, increasing by 186 percent, whereas tuition and fees increased by 240percent and overall price inflation grew by 72 percent (ibid.). While increases in textbook prices havefollowed close behind tuition increases, the estimated cost of textbooks and supplies for the averagefour-year undergraduate student was 898 for the academic year 2003-2004, or about 26 percent of thecost of tuition and fees at four-year public institutions.1 Continuing these rapid increases, during the2006-2007 academic year the average four-year undergraduate student spent 942 on textbooks andsupplies according to the College Board (Bell and Badolato 2008). Today, students and their familiesare estimated to spend as much as 6 billion on college textbooks and supplies (National Association1More specifically, first-time, full-time students spent a total of 898 at four-year public colleges and 886 at two-yearpublic colleges on books and supplies in 2003-2004. The College Board also provides similar data; sample averageundergraduate budgets for 2003-2004 put annual expenditures on books and supplies at 817 at four-year public collegesand 745 at two-year public colleges (College Board 2003). As of this writing, the most recent data show that, as theCollege Board reported, for the 2007-2008 academic year an average student spent an estimated 805 to 1,229 oncollege books and supplies. http://abcnews.go.com/OnCampus/story?id 6510643&page 1(accessed January 26, 2010) and http://www.govtrack.us/congress/billtext.xpd?bill s1111714&version is&nid t0%3Ais%3A22 (accessed January 26, 2010).-5-

of College Stores 2005; Koch 2006). While other estimates of annual expenses on textbooks vary bythe year and the type of institution attended (see Figure 2), it is reasonable to conclude that perstudent expenditures on textbooks can easily reach 1,000 annually.2Figure 2. Average amount spent on textbooks by schools surveyed by CALPIRG for2003-2004Source: Fairchild (2004)To better understand the state of soaring textbook prices in the local context, an overview ofthe case of Michigan should be useful. At the University of Michigan (Ann Arbor) campus, for the2002-2003 academic year the average undergraduate student spent 740 on books each year and theaverage professional-level or graduate student spent around 860 each year, according to estimates bythe Office of Financial Aid at the University of Michigan.3 More recently, for Winter 2007 the averagetotal textbook cost per course was 126, according to the report presented by the Textbook Task Forceat the University of Michigan Provost Office (2007). The Task Force studied 21 high-enrollmentcourses (those with 600 students enrolled), each including between 636 students (Engineering 101)and 1,795 students (Psychology 111). In each course students are assigned, and in most cases arerequired, to purchase one or two new or used textbooks, making the average cost 126 for a singlecourse with the range of 45- 224. What is striking is that simply multiplying the total number ofundergraduate students at this institution as of Winter 2007 (26,083) by the average total cost oftextbooks ( 126) generates approximately 3.3 million if each student took a single course in Winter2007. Imagine how much one undergraduate Michigan student would have to spend on textbookswhile taking several courses per semester for four years. Given that most students take 4-5 courses persemester, the estimated total costs of textbooks would reach approximately 15 million. It is apparent2James Koch (2006) points out that students at California public universities spent an average of 898 on textbooks inthe 2004-2005 academic year, and if textbook prices have continued to rise at six percent per year, then this expenditurewould have risen to 1,009 in the 2006-2007 academic year.3Doug Wernert, “Students Seek Out Best Book Deals,” The Michigan Daily, 6 January 2005. Available ek-out-best-book-deals (accessed February 2, 2009).-6-

that the cost of college textbooks imposes a significant financial burden on Michigan students andtheir families and, by extension, on the University of Michigan financial aid department.At Michigan, for over a decade, textbook prices have been a priority among campus issues forcandidates to address during Michigan Student Assembly presidential campaigns.4 In the spring of1998, Michigan Student Assembly presidential candidates had already expressed concerns about thehigh prices students pay for textbooks. One candidate stated that “(t)he textbook issue is somethingthat needs to be explored. Is there anything that can be done about it or is it out of our hands? It willbe interesting to see what happens with this issue because it is a big issue that affects all students onthis campus” (Cohen-Vrignaud and Wright 1998). It is interesting to note that despite Michigan’searlier concern about the textbook cost and its financial impact, a similar nationwide outcry, primarilyfrom the Student PIRGs (Public Interest Research Groups), was not realized with lobbying activitiesuntil the mid-2000s.5 University of Michigan students have expressed their concerns over the risingcosts of college textbooks for over a decade now even though there is no PIRG chapter in Michigan asof this writing. Independent of PIRGs’ initiatives, Michigan students, led by the Michigan StudentAssembly, have continued to engage the textbook issue.2.2 Factors Contributing to Changes in Textbook PricesWhile there are many factors that affect textbook pricing, the price of textbooks has increasedin recent years for two major reasons (GAO 2005). First, the revision cycle of three to four yearscommon to many books, regardless of whether or not the previous edition needed updating,contributes to the changes in textbook prices. The reason is that short revision cycles, or more frequentrevisions, limit students’ ability to reduce their costs by purchasing used textbooks and selling theirtextbooks back to bookstores at the end of the term. The California PIRG, which is taking on thepublishing industry on behalf of students, claims that the most widely purchased textbooks on collegecampuses had new editions published within three to four years and that they cost, on average,approximately 50 percent more than used copies of the previous edition (Fairchild 2004; Bell andBadolato 2008). Even though faculty indicate new editions are justified only half the time or less, thepublishers continue to update them frequently and students have to buy new books (op. cit.).64The Michigan Student Assembly has played a significant role in addressing as well as tackling the question of risingtextbook prices. Gerard Cohen-Vrignaud and Kristin Wright, “Dueling Platforms,” The Michigan Daily, March 13 1998.Available at ews/news24.html (accessed March 13, 2009).5For a brief history of the Student PIRGs’ campaigns to reduce college textbook costs, see the website of the MakeTextbooks Affordable Project, available at http://www.maketextbooksaffordable.org/ (accessed March 13, 2009). Thisproject was launched in 2003 and one of its primary missions is to engage in the campaign for more affordablealternatives to traditional textbooks, asking faculty members around the nation to share students’ concerns about thehigh cost of college textbooks by signing “The Open Textbooks Statement to Make Textbooks Affordable.” In thisstatement faculty members state their intent to include open textbooks in their search for the most appropriate coursematerials, and they declare their preference to adopt an open textbook in place of an expensive, commercial textbook, ifthe open textbook is the best option. Seven University of Michigan faculty members signed this statement. For the fulltext of the open textbooks statement of intent, see Appendix A. I also discuss open textbooks as one of the feasiblealternatives to conventional expensive textbooks in detail in section 3 below.6According to CALPIRG, 76 percent of faculty report that the new editions they use are justified “never” to “half the-7-

The second contribution to the significant rise in textbook cost is a more recent trend, i.e.enhanced offerings of additional instructional materials such as software and workbooks bundled intotextbooks. According to CALPIRG, in a certain instance a textbook was available both bundled andunbundled (only the textbook), and the bundled version was more than twice as expensive as theunbundled version of the same textbook. Publishers say they have increased investments in thedevelopment of supplements, particularly web-based tutorials and self-assessment tools, to meet theincreased demands from instructors who hope to enhance student learning (GAO 2005). However, 65percent of faculty report that they “rarely” or “never” use the bundled materials in their courses(Fairchild 2004). Above all, the increasing practice of packaging textbooks and supplements effectivelylimits the students’ ability to purchase less expensive used books.2.3 Other Factors Affecting the High Cost of College TextbooksOver the last several years, a large body of work has been done to examine why the textbookprices have been rising so rapidly, and most studies shed light on unusual, uncommon characteristicsof textbook markets (e.g. Koch 2006; Lewis 2009; University of Wisconsin System). Koch (2006), forinstance, addresses the question of how textbook markets differ from most other markets by looking atboth supply and demand sides of the market. He argues that the textbook market is remarkable in thatthe primary individuals who choose college textbooks, faculty, are not the people that pay for thosetextbooks, namely students. The textbook markets are often described as analogous to the market forprescripti

The Investigation into the Rising Cost of Textbooks A Background Study of the Context of Michigan Initiatives with an Eye Toward Launching a Library-based College Textbook Publishing Program Scholarly Publishing Office University of Michigan Library April 2009 (Updated January 2010) - 2 - This report was prepared by— Natsuko Hayashi Nicholls [email protected] Research Area Specialist .

100 ways to support - Research Into Recovery

Journey to Textbook Affordability : An Investigation of .

AT MOPAR TURN CARS INTO