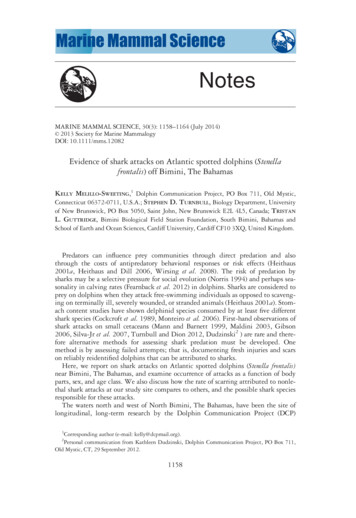 NOTES1159since 2001. The survey area is along the northwestern corner of the Great BahamaBank, immediately adjacent to the northerly flowing Gulf Stream (see Melillo 2008for a map of study area), ranges from 6 to 12 m in depth, and generally consists of awhite, sandy sea floor. Data were collected from local dolphin watch/swim vessels(inboard and outboard, all monohull). From 2003 to 2011, dolphin surveys (n 533)were completed, totaling 2,300 h of effort, resulting in 619 S. frontalis sightingsand an additional 85 sightings of mixed species groups (S. frontalis and Tursiops truncatus). Cumulatively, dolphin sightings totaled 480 h, with dolphins in view onunderwater video data for 43 h. Data collection was biased seasonally (May–September) and toward time of day (4–5 h before sunset). In addition to archived (2001–2002) images of 74 individuals, the following number of individuals were assessedfor wounds each year: 29 (2003), 31 (2004), 30 (2005), 31 (2006), 38 (2007), 36(2008), 35 (2009), 34 (2010), 31 (2011).A small community ( 120 individuals; DCP, unpublished data 2001–2011) ofS. frontalis are thought to be year-round, life-long residents of the waters near Bimini(Melillo et al. 2009). They are habituated to boats and human swimmers; however,physical contact between dolphins and humans is rare and the dolphins are not provisioned. Each individual’s spot pattern is unique, allowing for reliable photo-identification over time, and age estimates based on spot development (Perrin 1970,Herzing 1997). To confirm sex, a clear view of the genital region or repeated nursingobservations and/or calf associations was required. DCP’s S. frontalis photo-identification catalog included 92 individuals at the conclusion of this study. The sex ratio is2:1 (females:males); however, over one-third of cataloged individuals are of unknownsex (Greene et al. 2011). Because the photo-ID catalog is comprised of mainly underwater images, most, if not all angles of any given dolphin’s body are documented,allowing the observation of scars and injuries to be unbiased toward the dorsal surface. In addition, trained observers routinely surveyed dolphins’ entire bodies, in realtime, during underwater photograph and video collection; these notes supplementedthe photo-ID catalog.Images for the photo-ID catalog were collected using digital, underwater cameraswith occasional supplemental surface photographs. Video data were collected using amobile video/acoustic array system (Dudzinski et al. 1995). Still photos were captured from video as needed, when quality allowed. Camera models varied betweenyears, and included Olympus (various point and shoot models, with a minimum resolution of 6 MP) and Canon (Rebel XT) digital still cameras and Sony (TRV230,PC101, PC102) video cameras.DCP’s photo-ID catalog was reviewed for evidence of shark attacks on identifiedand cataloged individuals. Scars or fresh injuries were considered to have beeninflicted by sharks if they were crescent-shaped or included deep, widely spaced toothmarks that did not match a tooth rake of another dolphin (Heithaus 2001b). Particularly jagged injuries to pectoral or dorsal fins were also deemed as inflicted by sharkswhen there was extreme confidence that the injury could not have been inflicted byanother source, such as a boat propeller, fishing line or another dolphin. There wereonly two such cases and both were confirmed by an additional trained researcher.Only images of individuals from DCP’s photo-ID catalog with evidence of a sharkattack were used in this analysis. Uncataloged individuals were not included.Following Heithaus (2001b), the dolphin’s body was divided into 12 zones: head,body, and tail/peduncle for dorsal, ventral, and left and right surfaces. The dorsal fin,each pectoral fin and the flukes were also included. These locations were then broadlycategorized as dorsal, ventral, or extremity, with the dorsal fin included in the dorsal

1160MARINE MAMMAL SCIENCE, VOL. 30, NO. 3, 2014region, not extremities. Bites were coded for their location on the dolphin’s body.Age class and sex of the dolphin were noted as well as relative freshness of the bite(e.g., scar 1 yr, wound 1 yr; Heithaus 2001b).A total of 14 S. frontalis (15% of 92 cataloged animals) showed some sign of sharkattack, and a further 15 (16%) exhibited scars that could not conclusively be classifiedas shark induced or not. These unconfirmed scars were not included in furtheranalysis. There was no significant difference between the location of scars and wounds(dorsal side, including dorsal fin: n 7, 50%; extremities: n 5, 36%; ventral side:n 2, 14%; v2 2.71, df 2, P 0.257). No shark-related injuries were observedon the head or rostrum. It is assumed that sharks will have a greater success rate (i.e.,the attack is fatal for the dolphin) if the softer, ventral side of a dolphin is attacked(Heithaus 2001b). White sharks, for example, are known to attack the caudal peduncle or abdomen of a variety of small odontocetes (Long and Jones 1996).There was no difference in shark-induced scars or wounds between the sexes (male:n 6, 43%; female: n 7, 50%; unknown: n 1, 7%; v2 0.08, df 1, P 0.782).We were able to estimate what age class the S. frontalis were at the time of attack for10 individuals (after Herzing 1997). Seven of these were calves (four males, threefemales) and one was juvenile, one subadult, and one adult, all female. Observationsof neonates in the study community were rare and to date none has been observedwith injuries.Of the 14 individuals with confirmed shark injuries, only two (14%) exhibitedwounds: juveniles ID#64 (Fig. 1) and ID#87 (Fig. 2). The low rate of wound observations may be a factor of predominantly late spring and summer research effortsand/or an individual’s avoidance of boats during times of stress, such as following ashark attack. It was not readily apparent which shark species was responsible foreither injury.Nonlethal injuries to dolphins heal quite well and relatively quickly (Corkeronet al. 1987b, Orams and Deakin 1997, Elwen and Leeney 2010); therefore, less severeFigure 1. Photograph, taken on 20 August 2005, of an injury, first observed on 9 August2005, to male S. frontalis, ID#64. Note the double bite mark on two different pedunclesurfaces. ID#64 was the only dolphin with evidence of multiple (2) shark attacks, which wereseveral years apart.

NOTES1161Figure 2. Photographs, taken on 5 May 2010, of an injury to a female S. frontalis, ID#087.A) Note the damage to left side and B) the uniform scars, on the right, just below the damageddorsal fin, suggesting the possibility that as many as five of the shark’s teeth became embeddedin the dolphin’s flesh.attacks may not be accounted for, and discriminating between scar and wound mayhave inherent error. Because of these challenges, and the 16% of S. frontalis with scarsfrom unknown sources, the percentage of individuals within our cataloged community with a history of shark attack is likely an underestimation. This is particularlypertinent for adult S. frontalis, whose continued pigment development can camouflage or obscure old injuries.The S. frontalis off Bimini show less evidence of failed shark attacks than Tursiopssp. in several other parts of the world: Moreton Bay (36.6%, Corkeron et al. 1987a),Shark Bay (74.2%, Heithaus 2001b), Sarasota (31%),3 and Indian River Lagoon(32%).4 These differences are in contrast to the T. truncatus off Natal (Cockroft et al.1989), which, with 10.3% of dolphins exhibiting shark-induced injuries, were similar to the S. frontalis off Bimini, and to T. truncatus in the Adriatic Sea where theremay be very little shark predation (Bearzi et al. 1997). Differences in study locations,species, and methods prevent a robust statistical comparison; yet, that a minimum of15% of the cataloged S. frontalis had shark-induced scars indicates that this dolphincommunity, like others elsewhere, is subject to predation by large shark species. Thislikely influences habitat choice and space use across various spatio-temporal scales.However, few shark-related scars in a dolphin population may not equate to lowdirect predation; it may simply indicate very few unsuccessful predation attempts(Cockcroft et al. 1989).Heithaus (2001a) considers the following flaws in using photo-ID to assess the predation rate of sharks on dolphins: scars are evidence of failed predation attempts, theratio of successful and failed attempts varies between shark species and sizes, and the3Unpublished observations from Kim Urian, Duke University Marine Lab, Beaufort, NC, August2013.4Unpublished observations from Sarah Bechdel, Harbor Branch Oceanographic Institute, North FortPierce, FL, September 2013.

1162MARINE MAMMAL SCIENCE, VOL. 30, NO. 3, 2014size of the dolphins should bias this ratio with young dolphins successfully taken bysharks more often than older ones. Despite these reservations, using photo-ID toassess the percent of shark-scarred individuals in a community or population andcomparing different populations is still worthwhile (Heithaus 2001a).Of the large sharks found in and around Bimini, tiger (Galeocerdo cuvier) and bullsharks (Carcharhinus leucas) are the most likely predators of dolphins (Corkeron et al.1987a, Heithaus 2001a, Santos and Gadig 2009) and are abundant throughout theyear (Kessel 2010). Dusky (Carcharhinus obscurus), sixgill (Hexanchus griseus, Heithaus2001a) and shortfin mako sharks (Isurus oxyrinchus, Wood et al. 1970, Stevens 1984,Monteiro et al. 2006) may also be considered threats to dolphins, but are infrequentlydocumented in Bimini (Kessel 2010). Blacktip sharks (C. limbatus), although abundant in Bimini (Kessel 2010) likely target prey smaller than dolphins (Heithaus2001a). Great hammerheads (Sphyrna mokarran), despite their size, likely do not preyon dolphins given their typical prey are bottom fishes (Heithaus 2001a). Yet, Woodet al. (1970) report a possible hammerhead attack on T. truncatus; Heithaus (2001a)considers evidence to be insufficient regarding hammerhead (and blacktip) attacks onliving, small cetaceans. Many shark species are opportunistic feeders; therefore,interaction between sharks and dolphins may vary between locations (Heithaus2001a).The exact feeding habits of the S. frontalis off Bimini are not known at this time;however, it is likely they feed primarily in the deep water, possibly at night (DCP,unpublished data 2001–2012), as seen in other coastal populations (Hawaiian spinnerdolphins, Norris et al. 1985, Norris 1994; S. frontalis, Dudzinski 1996, Herzing andElliser 2013). Bimini S. frontalis also feed on the shallow Great Bahama Bank (Herzing et al. 2003, Dudzinski et al. 2012), like other S. frontalis (Herzing 1996),although this may be opportunistic. The diverse feeding habitats mean that S.frontalis are possibly vulnerable to shark predation in both shallow and deep water.Although survey effort is highly skewed to the shallow bank, the high sighting ratein the shallow, clear, sandy-bottom areas suggests that S. frontalis prefer this habitat.It is possible they spend the majority of nonfeeding time (e.g., resting, socializing) onthe bank in order to avoid/reduce predation; dusky dolphin (Lagenorhynchus obscurus)nursery groups may prefer shallow waters to avoid deep water predators (Weir et al.2008) and Heithaus (2001a) suggests that even infrequent or unsuccessful predationattempts can elicit a behavioral response from prey (e.g., habitat use). Continuedstudy efforts in this area will allow researchers to better understand predator effectson this group of dolphins.AcknowledgmentsMajor funding was provided by the Dolphin Communication Project (DCP), At-Sea Processors’ Association Pollock Conservation Consortium Fund at Alaska Pacific University (20062008), Bill & Nowdla Keefe’s Wild Dolphin Adventures and Al Sweeting, Jr. All data werecollected under permits obtained annually by DCP from the Department of Marine Resources,Ministry of Agriculture and Marine Resources, Nassau, The Bahamas. Bimini data collectionwas completed by Xenia Brobeil (2001), T. J. and Susan McCue (2002), with K. DeStefano(2003–2004) and D. Blanding (2005–2006) and assisted by seasonal interns (2007–2011).C. Stewart (UNBSJ) provided invaluable assistance with statistics. J. Gregg and K. Dudzinskireviewed various versions of this manuscript. The editors and anonymous reviewers greatlyimproved this manuscript. This paper represents contribution #115 from the DolphinCommunication Project.

Office of the Chief Facilities Officer