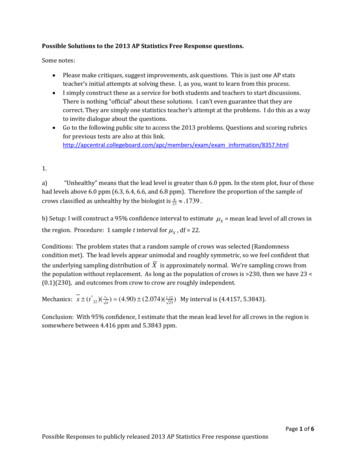 Possible Solutions to the 2013 AP Statistics Free Response questions.Some notes: Please make critiques, suggest improvements, ask questions. This is just one AP statsteacher’s initial attempts at solving these. I, as you, want to learn from this process.I simply construct these as a service for both students and teachers to start discussions.There is nothing “official” about these solutions. I can’t even guarantee that they arecorrect. They are simply one statistics teacher’s attempt at the problems. I do this as a wayto invite dialogue about the questions.Go to the following public site to access the 2013 problems. Questions and scoring rubricsfor previous tests are also at this /exam/exam information/8357.html1.a)“Unhealthy” means that the lead level is greater than 6.0 ppm. In the stem plot, four of thesehad levels above 6.0 ppm (6.3, 6.4, 6.6, and 6.8 ppm). Therefore the proportion of the sample ofcrows classified as unhealthy by the biologist is 234 .1739 .b) Setup: I will construct a 95% confidence interval to estimate µ X mean lead level of all crows inthe region. Procedure: 1 sample t interval for µ X , df 22.Conditions: The problem states that a random sample of crows was selected (Randomnesscondition met). The lead levels appear unimodal and roughly symmetric, so we feel confident thatthe underlying sampling distribution of X is approximately normal. We’re sampling crows fromthe population without replacement. As long as the population of crows is 230, then we have 23 (0.1)(230), and outcomes from crow to crow are roughly independent.Mechanics: x (t *22 )(sxn) (4.90) (2.074)( 1.12) My interval is (4.4157, 5.3843).23Conclusion: With 95% confidence, I estimate that the mean lead level for all crows in the region issomewhere between 4.416 ppm and 5.3843 ppm.Possible Responses to publicly released 2013 AP Statistics Free response questionsPage 1 of 6

2.a) If the first 500 students who enter the stadium are different than the population of all studentswith their satisfaction levels, then our estimate may be biased. For example, perhaps the first 500students who enter the stadium tend to live in “below average” dorms and head to the game earlyto get out of their shoddy living conditions. This group would probably be less satisfied than a morerepresentative sample. A satisfaction rate computed from such a sample is likely to produce anestimate of the satisfaction rate that is probably too low.b) Alphabetize the list. Then number each student from 1 – 70,000 (First student alphabetically 1, second alphabetically 2, last alphabetically 70,000). Use a random number generator toselect 500 different integers from 1-70,000 (no repeats). The students from our alphabetized listwith those numbers are in our sample.c) Stratification by campus would be better than stratification by gender if the associationbetween campus and satisfaction is stronger than the association between gender andsatisfaction. Suppose, for example, that satisfaction rates between males and females are identical(i.e.: that gender and satisfaction are independent). Then stratifying by gender won’t increase theprecision of our estimate over an SRS much at all. But if people on the first campus love thegrounds and those on the second campus don’t, then satisfaction rates within these two groups willbe different. We can capitalize on this difference in satisfaction rates by getting a sufficient numberof students from each campus, calculating a satisfaction rate for each stratum, and then using thosesatisfaction rates to compute an appropriate estimate of the proportion of all students who aresatisfied (use an appropriately weighted average of the two satisfaction rates). This estimate willvary less than the ones from sample stratified by gender.Possible Responses to publicly released 2013 AP Statistics Free response questionsPage 2 of 6

5.a) No. Because the daily meditation was not imposed randomly on each subject, we cannot claimthat the meditation is responsible for the lower rates of high-blood pressure in that group. It maybe that those who meditated were also consuming less sodium than the non-meditators. Thedifference in sodium levels and not the meditation may be the reason for the lower rates of highblood pressure.b) Because the number of successes (has high blood pressure) and failures (does not have highblood pressure) within each treatment group were not both greater than 10:GroupMeditation groupControl Group# successes (with high BP)08# failures no high (BP)119Three of these four values are less than 10. So the sampling distribution of p m p c cannot beassumed to be normal.c) In our samples, p m p c 110 178 0.47 . To make a conclusion based on this evidence, weneed to see how likely it is to get a value for p m p c as low/ lower than -0.47 by chance if we run asimulation where we assume that null hypothesis is true pm pc . A sample result this low/lowerhappened in 76/10,000 samples: A simulated p-value would then be about .0076 this is lowerthan .01, So we have evidence at the 1% level that men who meditate in this retirement communityhave lower rates of high BP than those who do not meditate. However, we cannot claim that themeditation is the cause of the lower rates of high BP.Possible Responses to publicly released 2013 AP Statistics Free response questionsPage 5 of 6

Possible Responses to publicly released 2013 AP Statistics Free response questions Possible Solutions to the 2013 AP Statistics Free Response questions. Some notes: Please make crit iques, suggest improve ments, ask questions. This is just one AP stats teacher’s initial attempts at solving these. I , as you, want to learn from this process. I simply construct these as a service for .

This report is made possible through Public Safety Canada .