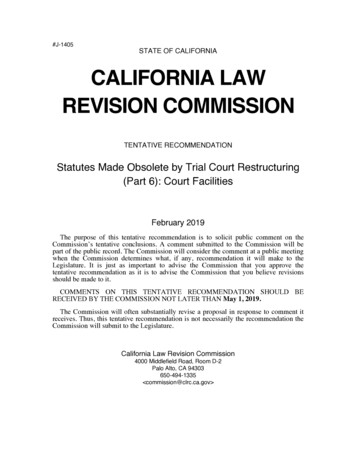 SUMMARY OF TENTATIVERECOMMENDATIONIn the past, California had several types of trial courts (superior courts, municipalcourts, and justice courts). Those courts were county-operated, funded primarily by thecounties, and largely staffed with county employees. Court facilities belonged to thecounties, which were responsible for building and maintaining them.Around the turn of the century, three major reforms of California’s trial court systemoccurred:(1)Trial court unification. Municipal and justice courts were eliminated; alltrial court operations were consolidated in the superior court in each county.(2)Lockyer-Isenberg Trial Court Funding Act. Under this Act, the stateassumed full responsibility for funding and operating the trial courts, insteadof placing that responsibility primarily on the counties.(3)Trial Court Employment Protection and Governance Act. This Actestablished a new personnel system for trial court employees, in which theybecame employees of the court itself, instead of the county or state.At the request of the Legislature, the Law Revision Commission helped to draft theextensive constitutional and statutory revisions necessary to implement these majorreforms. Since then, the Commission has done much additional work to update the codesto reflect the restructuring of the trial courts.The Trial Court Funding Act did not resolve issues relating to court facilities. Instead,it created a task force on court facilities, which made recommendations that became thebasis for the Trial Court Facilities Act enacted in 2002.Under the Trial Court Facilities Act, the judicial branch became primarily responsiblefor court facilities. The Act specified a process for transferring the court facilities in eachcounty to the state. By 2009, all of those transfers were essentially complete.Many statutes relating to court facilities now appear to be obsolete, in whole or in part.The Commission studied this area and tentatively recommends various statutory revisionsto remove obsolete material, as detailed herein. The Commission seeks comment on itsproposed revisions.This recommendation was prepared pursuant to Government Code Section 71674 andResolution Chapter 158 of the Statutes of 2018.

Tentative Recommendation February 2019STATUTES MADE OBSOLETE BY TRIALCOURT RESTRUCTURING (PART 6):COURT FACILITIES10California’s trial court system was dramatically restructured around the turn of thecentury. Issues relating to court facilities were resolved later; development andimplementation of a new approach to court facilities was essentially completed by 2009.As a result, many code provisions relating to court facilities may now be obsolete, inwhole or in part. The Law Revision Commission1 studied this area and tentativelyrecommends various statutory revisions to remove material made obsolete by trial courtrestructuring.The Commission explains its proposed revisions below, after providing somebackground information. The Commission invites comments on its proposed revisions.Unless otherwise indicated, all statutory references are to the Government Code.11Background12To provide context for the Commission’s proposed reforms, it is necessary to presentbackground information on:12345678913141516 Trial court restructuring.Related reforms pertaining to court facilities.The Commission’s role in these matters.17Those topics are discussed in order here.18Restructuring of California’s Trial Court System19Historically, each county had a superior court, as well as one or more municipal orjustice courts with limited jurisdiction.2 The trial courts were county-operated, funded201. Any California Law Revision Commission document referred to in this tentative recommendationcan be obtained from the Commission. Recent materials can be downloaded from the Commission’swebsite (www.clrc.ca.gov). Other materials can be obtained by contacting the Commission’s staff, throughthe website or otherwise.2. See former Cal. Const. art. VI, §§ 4, 5; Trial Court Unification: Constitutional Revision (SCA 3), 24Cal. L. Revision Comm’n Reports 1, 21 (1994) (hereafter “TCU: Constitutional Revision”) (“In eachcounty there is a superior court and one or more municipal or justice courts depending on population.”(footnotes omitted)); see also id. at 71-72 (showing text of former Cal. Const. art. §§ 4, 5 & proposedrevisions); 2 B. Witkin, California Procedure Courts §164, at 236-37 (5th ed. 2008).–1–

Tentative Recommendation February 20193primarily by the counties, and largely staffed with county employees.3 Court facilitiesbelonged to the counties, which were responsible for building and maintaining them.4Around the turn of the century, three major reforms occurred:4567891011Trial court unification. Justice courts were eliminated statewide through aballot measure approved by the voters in 1994.5 Four years later, the votersapproved a measure that permitted trial court unification on a county-by-countybasis: On a vote of a majority of the municipal court judges and a majority of thesuperior court judges in a county, the municipal and superior courts in that countycould unify their operations in the superior court.6 By early 2001, the trial courtsin all of California’s 58 counties had unified.7 Each county now has a unifiedsuperior court, which handles all trial court operations in that county.12131415Lockyer-Isenberg Trial Court Funding Act. Under this 1997 legislation,8 thestate assumed full responsibility for funding trial court operations.9 The goal wasto eliminate disparities in funding from county to county, helping to ensure equalservice in courts across the state.1016171819Trial Court Employment Protection and Governance Act (“TCEPGA”). Thislegislation was enacted in 2000.11 It established a new personnel system for trialcourt employees, in which they are employed by the superior court itself (not bythe county or the state).121220Treatment of Trial Court Facilities21The above-described trial restructuring reforms did not resolve the proper treatment oftrial court facilities. Instead, the Trial Court Funding Act created the Task Force on CourtFacilities, which was “charged to review and report the status of court facilities22233. See, e.g., Senate Committee on Judiciary Analysis of AB 233 (June 10, 1997); Trial CourtUnification: Revision of Codes, 28 Cal. L. Revision Comm’n Reports 51, 76-79 (1998) (hereafter, “TCU:Revision of Codes”; J. Clark Kelso, Analysis of Existing Court Staffing Statutes (DRAFT: Jan. 24, 2000)(on file with Commission).4. See, e.g., Statutes Made Obsolete by Trial Court Restructuring: Part 2 (hereafter, “TCR: Part 2”),33 Cal. L. Revision Comm’n Reports 169, 177 (2003) (“Court facilities have historically been countystructures.”).5. See 1994 Cal. Stat. res. ch. 113 (SCA 7 (Dills)) (Prop. 191, approved Nov. 8, 1994).6. See 1996 Cal. Stat. res. ch. 36 (SCA 4 (Lockyer)) (Prop. 220, approved June 2, 1998).7. See https://www.courts.ca.gov/documents/unidate.pdf.8. 1997 Cal. Stat. ch. 850; see generally Sections 77000-77655.9. See Section 77200 (“On and after July 1, 1997, the state shall assume sole responsibility for thefunding of court operations, as defined in Section 77003 and Rule 10.810 of the California Rules of Courtas it read on January 1, 2007.”).10. See Section 77100(c) (“Local funding of trial courts may create disparities in the availability of thecourts for the resolution of disputes and the dispensation of justice.”); see also Section 77100(d) (“Themethod of funding trial courts should not create financial barriers to the fair and proper resolution of civiland criminal actions.”).11. 2000 Cal. Stat. ch. 1010; see generally Sections 71600-71675.12. See, e.g., Senate Committee on Judiciary Analysis of SB 2140 (May 9, 2000).–2–

Tentative Recommendation February 201911throughout the state, and to make recommendations for specific funding responsibilitiesamong the entities of government (i.e., state and/or county) with regards to court facilitiesmaintenance and construction.”13The task force visited court facilities throughout the state and submitted its final reportto the Legislature in 2001, as required by statute.14 It found that many of the facilitieswere in poor condition and in need of repair, renovation, or maintenance.15The overarching recommendation of the task force was that “responsibility for trialcourt facilities funding and operation be shifted from the counties to the state.”16 The taskforce gave four main reasons for that recommendation, which the Legislature endorsed inthe Trial Court Facilities Act, enacted in 2002.17 A key theme was that the judiciaryshould control both court operations and court facilities:12131415161718192021222324(1) The judicial branch of government is now wholly responsible for itsprograms and operations, with the exception of trial court facilities. The judiciaryshould have the responsibility for all of its functions related to its operations andstaff, including facilities.(2) Uniting responsibility for operations and facilities increases the likelihoodthat operational costs will be considered when facility decisions are made, andenhances economical, efficient, and effective court operations.(3) The state, being solely responsible for creating new judicial positions, drivesthe need for new court facilities.(4) Equal access to justice is a key underpinning of our society and the rule oflaw. It is also a paramount goal of the Judicial Council, the policymaking body ofthe judicial branch. The state can best ensure uniformity of access to all courtfacilities in California.1825Consistent with those findings, the Trial Court Facilities Act grants the judicial branchbroad authority with respect to court facilities, while still ensuring that other voices areheard and taken into account.19Of particular note, the Act set a deadline for each county to negotiate agreementstransferring its court facilities (and responsibility for maintaining those facilities) to thestate.20 The court facility transfers took longer than expected, but they were essentiallycompleted by the end of 2009.211234567891026272829303113. Senate Committee on Judiciary Analysis of SB 1732 (April 16, 2002), p. 1.14. See Section 77654; Senate Committee on Judiciary Analysis of SB 1732 (April 16, 2002), p. 2.15. See Senate Committee on Judiciary Analysis of SB 1732 (April 16, 2002), p. 2.16. 2002 Cal. Stat. ch. 1082, § 1 (legislative findings for the Trial Court Facilities Act).17. 2002 Cal. Stat. ch. 1082 (SB 1732 (Escutia)); see generally Sections 70301-70403.18. 2002 Cal. Stat. ch. 1082, § 1 (emphasis added). For further background on the Trial Court FacilitiesAct, see Assembly Committee on Judiciary Analysis of SB 1732 (June 25, 2002); Senate Committee onJudiciary Analysis of SB 1732 (April 16, 2002).19. See, e.g., Section 70391.20. See former Section 70321 (2002 Cal. Stat. ch. 1082, § 4) (“The Judicial Council, in consultationwith the superior court of each county and the county shall enter into agreements concerning the transfer of–3–

Tentative Recommendation February 20195Some of the court facility situations were complex. For example, there werecourthouses with historical significance, ones that were subject to a bonded indebtedness,facilities that were in bad repair or seismically unsafe, buildings that were used by a courtbut also for other purposes (e.g., a city hall, jail, or district attorney’s office), and variousother complications. The unusual situations received special treatment as needed.226Role of the Law Revision Commission in Trial Court Restructuring7At the direction of the Legislature, the Law Revision Commission was involved in trialcourt restructuring from the outset. In 1993-94, the Commission helped to draft theconstitutional revisions necessary to accomplish trial court unification.23 It later draftedthe extensive statutory revisions necessary to accommodate county-by-countyunification.24After the trial courts in all counties unified, the Commission prepared a massive reportproposing further statutory revisions (and a few constitutional revisions) to reflect theelimination of the municipal courts. As requested by the Legislature, that 2001 report alsoincluded proposed legislation to reflect the enactment of the Trial Court Funding Act andthe TCEPGA.25Since then, the Commission has continued to review the codes and periodicallyrecommend revisions to reflect trial court unification, enactment of the Trial CourtFunding Act, and enactment of the TCEPGA.26 Virtually all of the Commission’sproposed legislation on trial court restructuring has become law.271234891011121314151617181920responsibility for court facilities from that county to the Judicial Council. Transfer of responsibility mayoccur not earlier than July 1, 2004, and not later than June 30, 2007.”).21. See, e.g., Section 70321 (“The Judic 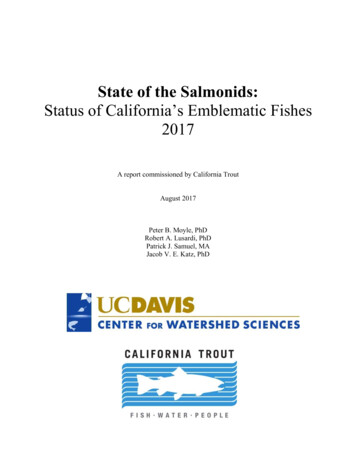 State of the Salmonids: Status of California’s Emblematic . 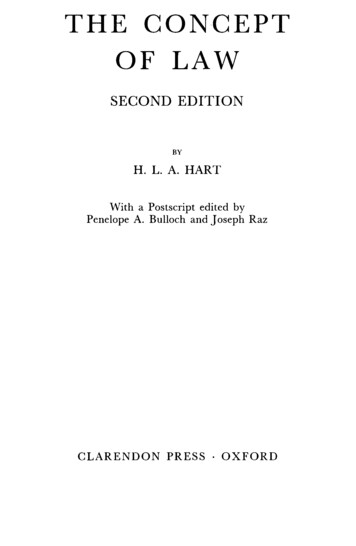 THE CONCEPT OF LAW - American University 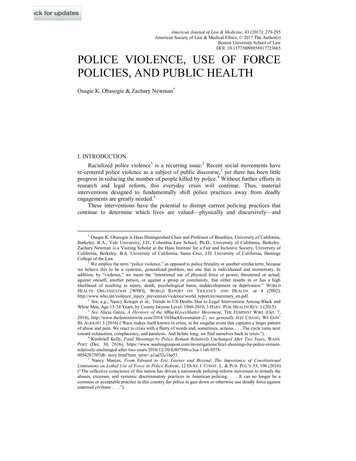 Police Violence, Use of Force Policies, and . - Berkeley Law 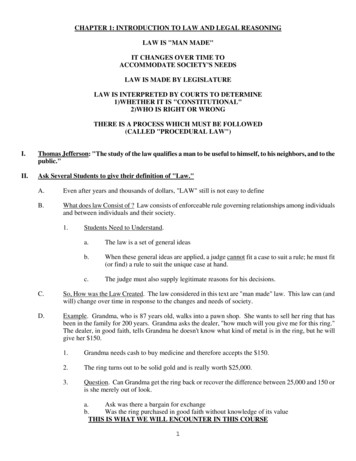 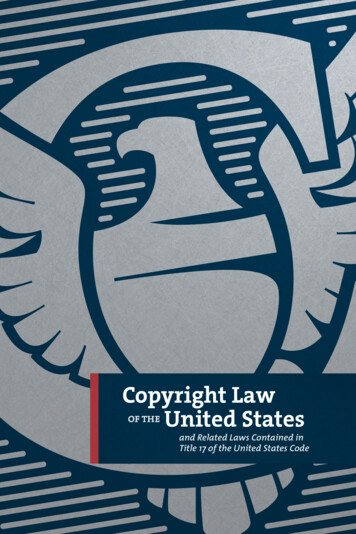 Copyright Law of the United States and Related Laws . 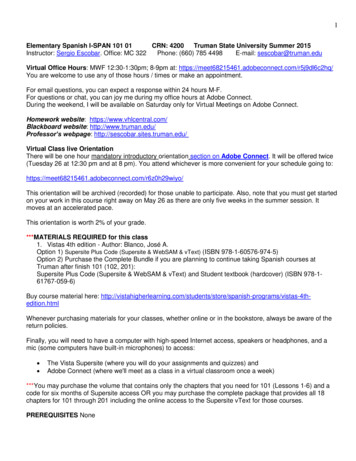 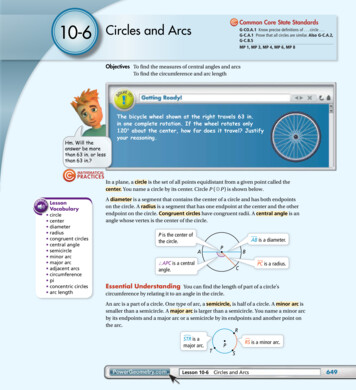 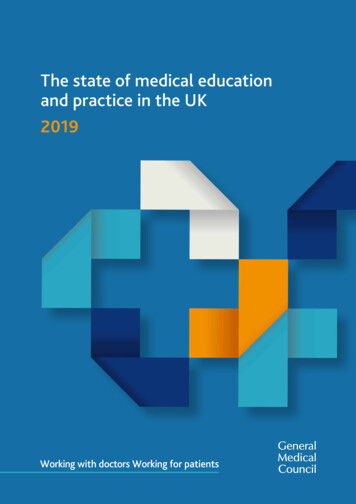 The state of medical education and practice in the UK 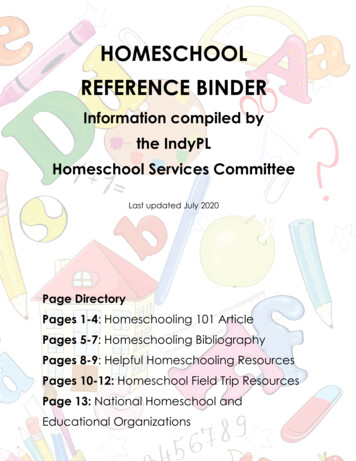 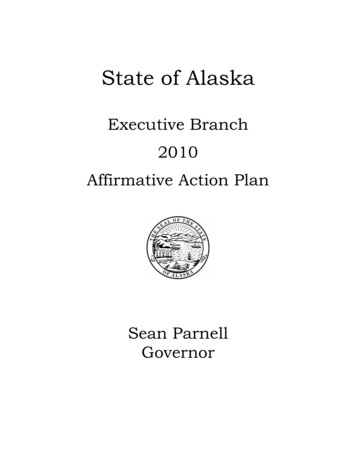 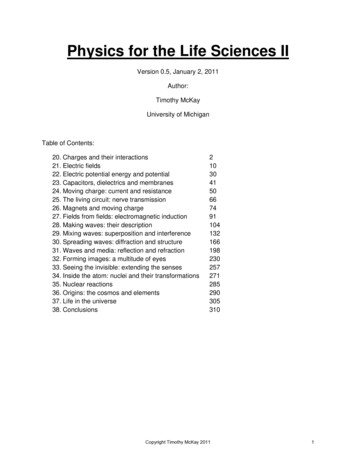 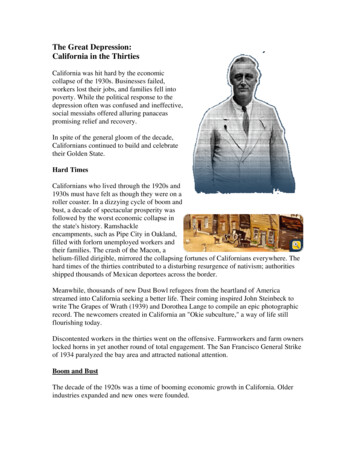 The Great Depression: California in the Thirties