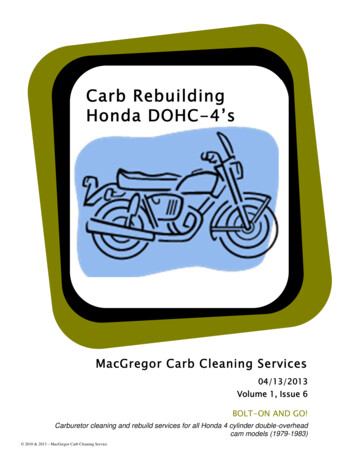 PurposeThe purpose of this booklet is to de-mystify the 4-ganged carburetor banks used onthe ’79-’83 Honda DOHCs (750cc – 1100cc). Having some basic tools, plus a fewinexpensive specialty tools, a modicum of mechanical capability and common sense- you can tear down, clean and rebuild your carbs in a short weekend. This bookletwill show you how. The pictures shown are for a CB900, but will be nearly identicalfor CB750, CB1000 and CB1100 with slight differences, which will be noted. Theprocess is in 6 steps:1. Bank breakdown2. Carb breakdown3. Clean4. Carb rebuild5. Bank rebuild6. Adjustment, testing and troubleshootingBasic Carb TermsThe carbs are numbered the same way as the cylinders on the bike – 1 through 4left to right as you sit on the bike. The fronts of the carbs have the silver-coloredthrottle plates (butterflies), and the rear of the carbs have the brass-colored chokeplates. The round tops are called caps and the square bottoms are called bowls.Getting StartedFirst, get yourself an areato work – it can be agood-and-proper shopworkbench, or even asimple table (appropriatelycovered and protectedfrom spilled liquids andsolvents) and a comfychair. My downstairsbasement is set up withjust a large coffee table covered with thick cardboard. You need to have enoughroom to set up your tools, layout the parts of the carbs and a cleaning area to cleanthe parts. You’ll want a plastic pan such as those used for oil changes for cleaningthe individual parts prior to assembly. It should be impervious to the chemicalsused in spray carb-cleaner or brake-cleaner. 2010 & 2013 – MacGregor Carb Cleaning Service

Additionally, you’ll want a copy of the Factory Service Manual to refer to as you go.The FSM is the bible by which all work on our bikes should be validated.Finally, make sure you read through this booklet all the way through at least twice tofamiliarize yourself with the procedures BEFORE you start disassembly. Nothingworse than ending up with a pile of really important looking parts after it’s all backtogether! If you don’t feel completely confident in what you find in this booklet, by allmeans grab a digital camera, a bunch of plastic sandwich bags and a Sharpie penand document your work as you go.Basic toolsIn addition to your workbench and cleaningtray, here’s what I recommend for basictools: Medium flat-blade screwdriver Medium Phillips-head screwdriver Large Phillips-head screwdriver Small flat-blade screwdriver Vice-Grips 4” Crescent wrench 1” wire brush (1 each steel and brass) Needle nose pliers Package of 4” acid brushes (sometimes called solder-flux brushes) with thebristles trimmed to ¼” length Paper towels & Q-Tips Additional tools that you might need: Flat file Flashlight Magnifying glass Box-knife Ultrasonic cleaner (Harbor Freight has them for about 60)or Large bucket to soak your carbs inSpecialty toolsOver and above the tools noted previously, here are some specialty tools that willmake the job a snap (and some you’ll need for other jobs on the bike anyway): Motion-Pro carb sync tool (shown at the top of page 36) High E-string from an old guitar (approx .012” diameter)4 2010 & 2013 – MacGregor Carb Cleaning Service

the ’79-’83 Honda DOHCs (750cc – 1100cc). Having some basic tools, plus a few inexpensive specialty tools, a modicum of mechanical capability and common sense - you can tear down, clean and rebuild your carbs in a short weekend. This booklet will show you how. The pictures shown are for a CB900, but will be nearly identical