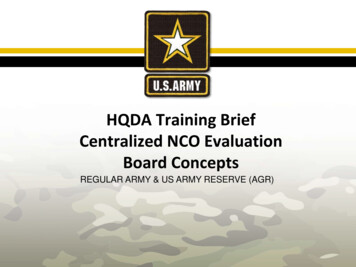 WAY AHEADConduct annual (Centralized Boards) evaluations (OMLs) of NCO talent IAW Army Doctrine(MOI) and Proponent Guidance (DA Pam 600-25) to inform a myriad of HR decisionsSSG EvaluationBoardMSG EvaluationBoardSGM EvaluationBoardSFC rdsSFCRecordsFEBRUARYMAYIdentifies followingyear’s SMCAUGUSTNOVEMBERCSM/SGMRecordsARSOF/SMUEvaluation Board Promotion Boards will be eliminated and replaced with NCO Evaluation Boards Board mission of voting records and creating an OML for all MOSs remains unchangedAll NCOs in zone of consideration will be evaluated annually NCOs cannot opt out of considerationAnnual OMLs replace previous ones as they are approvedARSOF/SMU board: Supports identification of NCOs to serve against CSM & Nominativerequirements and evaluates CMFs 18, 37 and 38 records. All CSM/SGM (other than CMFs18, 37, and 38) who are not slated as a CSM or against a Nominative position will be furtherevaluated by the CSM/SGM Board (August) for inclusion onto an Army OML3

NCO EVALUATION BOARD Conducted annually (NCOs with 18 months time in grade): SSG records in February timeframe SFC records in November timeframe 1SG/MSG records in May timeframe CSM/SGM records in August timeframe Board mission: Evaluate records resulting in creation of an OML Establish NCOs as fully qualified (FQ) or not fully qualified (NFQ) OML: Used to inform decisions Training Assignments Promotion Retention Eligibility announced by MILPER message No OML will be published – only NCOs who are fully qualifiedalphabetically (Most Qualified will have an asterisk) Army Career Tracker will tell you your OML ranking (compared to yourpeers) in your Career Progression MOS6

VOTER FEEDBACKThis particular piece (voter feedback) is not expected to be in place (in the overarching transition plan) until theFY20 CSM/SGM Talent Assessment Board in AUGUST 2020. If automation prevents; can be delayed. Noexpectations sooner.As with almost all things we do, taking baby steps is always better than big huge leaps. If we simply stick to theareas that are very basic (ADP 6-22, MOI and NCOER specific), it's a step towards something in the future that canbe further refined, if needed. Stick by the idea that we should limit feedback (as of now) to the basics:Character (Army values, discipline)Presence (fitness, bearing, resilience)Intellect (innovation, expertise, metal agility)Leads (lead by example, influences others)Develops (develops self and others)Achieves (gets results)Member identifies if positive ofnegative impact using“ ” or “-” keysIntent is to NOT INFLUENCE how members vote – so aligning feedback on Army doctrine appears best approach.Because we ask each member to vote based on their own knowledge/experiences applied to the MOI andDA Pam 600-25, NCOs need to understand the feedback is centered on that.It will be a step in the right direction and we can learn, based on feedback from the field after they get to see it, ifthere is value added or not and what additional changes would be needed to make it more viable.15

ADDITIONAL CONSIDERATIONS Frocking: Frocking policies will be terminated MOS Reclassification Soldiers requiring reclassification from one MOS into another MOS will betransitioned from one OML into another based on their standing in terms ofpercentage. If an NCO is on an OML at the 35th percentile, when transferred intoanother OML in a new MOS, that NCO would be transitioned at the 35thpercentile. Promotion Stagnation The Army measures stagnation by assessing promotion timing by years ofservice at promotion. While MOSs differ because of approved structure,they are compared to Army averages to ensure continued opportunities forpromotion exist. When it’s been determined that viable career paths areunattainable, the Army would exercise it’s authority to deny continuedservice under the QSP; creating viable career paths for others. This wouldbe informed by use of the OML – starting at the bottom, working up.17

KEY TAKEAWAYSTHE ARMY INTENDS TO ACCOMPLISH THE FOLLOWING:1. ALL FY19 NCO PROMOTION BOARDS WILL USE A SOLDIER'S OML STANDING TOESTABLISH PROMOTION SEQUENCE NUMBERS INSTEAD OF TIME IN GRADE ANDTIME IN SERVICE.2. NCO EVALUATION BOARDS WILL REPLACE NCO PROMOTION SELECTION BOARDS.3. NCO EVALUATION BOARDS WILL EVALUATE SOLDIERS ANNUALLY WITH A MISSIONTO CREATE AN OML FOR USE TO INFORM A MYRIAD OF HR DECISIONS,ESTABLISHING SOLDIERS AS FQ OR NFQ. THE ARMY INTENDS TO USE THESE OMLSTO TRANSITION FROM TIME-BASED TO MERIT-BASED DECISION PROCESSES.THIS IS A TALENT MANAGEMENT EFFORT.4. NCOS WILL LEARN THEIR ACTUAL OML STANDING (BY GRADE AND CAREERPROGRESSION MOS) THROUGH THE ARMY CAREER TRACKER.5. NCOS WILL NOT BE ABLE TO OPT OUT OF CONSIDERATION BY AN NCOEVALUATION BOARD.19

KEY TAKEAWAYS (CONTINUED)11. ANNUAL PROMOTION LISTS TO SFC AND ABOVE WITH SOLDIERS IDENTIFIED FORPROMOTION (WITH A SEQUENCE NUMBER) WILL END AND BE REPLACED WITH AMONTHLY PROMOTION SELECTION PROCESS THAT MIRRORS HOW THE ARMYPROMOTES TO SGT AND SSG.12. THE ARMY WILL PUBLISH QUARTERLY PROJECTIONS OF PROMOTION DEMANDFOR ALL MOS AND GRADE COMBINATIONS.13. THE ARMY WILL CREATE A PROCESS FOR BOARD MEMBERS TO PROVIDEFEEDBACK TO NCOS FOLLOWING AN EVALUATION BOARD ON WHAT INFLUENCEDTHEIR VOTE WHILE REVIEWING THE NCO'S RECORD.14. THE ARMY INTENDS TO INITIATE A BAR TO CONTINUED SERVICE AGAINST NCOSWHO REFUSE PROMOTION AFTER HAVING BEEN IDENTIFIED AS THE BEST QUALIFIEDNCO FOR PROMOTION.15. THE ARMY WILL ANNOUNCE ALL SGT THROUGH SGM PROMOTION SELECTSMONTHLY, BY THE 15TH DAY OF THE PRECEDING MONTH.21

Addressing the Opioid Crisis Via Community Based

Simplify Management and Orchestration in an Application .