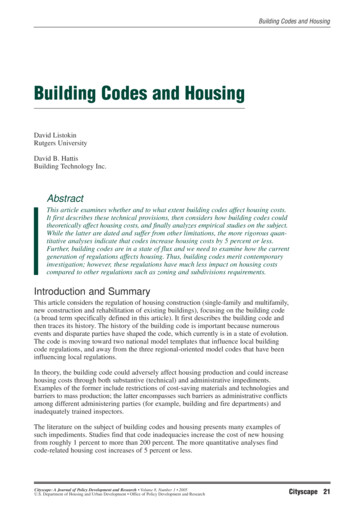 Building Codes and HousingBuilding Codes and HousingDavid ListokinRutgers UniversityDavid B. HattisBuilding Technology Inc.AbstractThis article examines whether and to what extent building codes affect housing costs.It first describes these technical provisions, then considers how building codes couldtheoretically affect housing costs, and finally analyzes empirical studies on the subject.While the latter are dated and suffer from other limitations, the more rigorous quan titative analyses indicate that codes increase housing costs by 5 percent or less.Further, building codes are in a state of flux and we need to examine how the currentgeneration of regulations affects housing. Thus, building codes merit contemporaryinvestigation; however, these regulations have much less impact on housing costscompared to other regulations such as zoning and subdivisions requirements.Introduction and SummaryThis article considers the regulation of housing construction (single-family and multifamily,new construction and rehabilitation of existing buildings), focusing on the building code(a broad term specifically defined in this article). It first describes the building code andthen traces its history. The history of the building code is important because numerousevents and disparate parties have shaped the code, which currently is in a state of evolution.The code is moving toward two national model templates that influence local buildingcode regulations, and away from the three regional-oriented model codes that have beeninfluencing local regulations.In theory, the building code could adversely affect housing production and could increasehousing costs through both substantive (technical) and administrative impediments.Examples of the former include restrictions of cost-saving materials and technologies andbarriers to mass production; the latter encompasses such barriers as administrative conflictsamong different administering parties (for example, building and fire departments) andinadequately trained inspectors.The literature on the subject of building codes and housing presents many examples ofsuch impediments. Studies find that code inadequacies increase the cost of new housingfrom roughly 1 percent to more than 200 percent. The more quantitative analyses findcode-related housing cost increases of 5 percent or less.Cityscape: A Journal of Policy Development and Research Volume 8, Number 1 2005U.S. Department of Housing and Urban Development Office of Policy Development and ResearchCityscape 21

Listokin and HattisThough informative, the literature to date suffers from gaps in timeliness, conceptualbasis, methodology, and scope. Much research describes the code world of yesteryear,rather than the current situation of two national model codes influencing the regulations.Conceptually, limited “benchmark” and cost-benefit study has been conducted to definewhat are “appropriate” versus “inappropriate,” or “excessive,” regulations. Further, mostreports on the subject are characterized by anecdotal—as opposed to empirical-based—quantitative analysis, and by limited scope (for example, study of only the regulations,but not their administration). Similarly, some studies have been carried out by partieswith proprietary interests, or at their behest.To address these gaps, we conclude with examples for a research agenda, including thefollowing topics:1.Examine the cost impacts of the more stringent requirements for new constructionmandated by the emerging national codes in the areas of seismic provisions, windimpact protection, sprinklers, and plumbing.2.Examine differences among the various emerging “smart code” regulations affectingbuilding rehabilitation, such as the New Jersey Rehabilitation Subcode and theNationally Applicable Recommended Rehabilitation Provisions (NARRP). Thisanalysis should include evaluation of the empirical results from adoption of smartcodes (for example, enhanced renovation activity) in New Jersey, Maryland, andother states.3.Analyze potentially lingering onerous building code provisions regarding rehabilitation.For example, “substantial improvement” may trigger (under governing FederalEmergency Management Administration [FEMA] and rehabilitation code provisions)expensive new requirements for flood plain and seismic design.4.Include cost-benefit study in building code research. For example, use FEMA’s NaturalHazard Loss Estimation Methodology to examine the societal consequences of themore stringent seismic and wind provisions, such as cost-per-life-saved. Such researchcould help define benchmark standards; requirements above these benchmarks wouldconstitute excessive regulations.5.Work backward from the desired end model of the affordable housing unit—anothertack for developing a benchmark for appropriate standards. We can agree that the mostaffordable types of shelter consist of reinventing the single room occupancy (SRO)dwelling and allowing accessory housing, such as “granny flats,” or other affordableconfigurations (for example, the Boston “triple decker”); therefore, we should analyzeif and how building codes restrict production of these affordable units.6.Gather more empirical data on the subject and conduct quantitative analysis on howcodes affect housing. For example, contemporary information is needed on the localimplementation of building regulations, including if a local jurisdiction has a code, thebasis of that code, the profile of officials implementing the regulations (for example,background, education, and civil service status), as well as other details (for example,prohibited and permitted materials and procedures). The last national comparablesurvey of that type dates from the late 1960s to the early 1970s. A contemporarydatabase could be created through a new survey and/or by tapping extant sources, suchas the Building Code Effectiveness Grading Schedule developed by the insuranceindustry. With such data, we can effect, in a contemporary setting, the quantitativeanalysis of how building regulations and their administration affect housing.22 Cityscape

Building Codes and Housing7.When researching the subject, analyze the influence of diffusion of innovation. Manyextant studies on the impact of codes on housing presume that if a cost-saving materialor procedure is available, it will be used—but for code restrictions. The literature ondiffusion of innovation paints a murkier picture; cost-saving techniques may be resistedbecause of inefficient information, builder inertia, inadequacy of skills, and perceivedrejection by housing consumers, as well as because of code barriers. That murkier realitymust be acknowledged in the future study of how the building code affects housing.8.Add overall perspective to the many fruitful areas for building code research. In alllikelihood, building codes have much less impact on new housing costs compared toother regulations, such as zoning and subdivision requirements. As such, buildingcodes constitute a high, but not the highest, priority for regulatory study.Description of the Regulations/Practices Involved:Their History, Prevalence, and JustificationsDescriptionThe regulation of building construction in the United States is an exercise of governmentpolice power, and with very few exceptions (for example, accessibility for the disabledand manufactured housing), this regulation is legislated at the local or state governmentlevels. It traditionally has been accomplished by means of a set of interrelated codes,each addressing a specific building system or a specific building attribute. While thesecodes may be packaged in different ways in different jurisdictions, they generally can bedescribed as follows: A building code that addresses the building’s structural system, fire safety, generalsafety, enclosure, interior environment, and materials. A plumbing code that addresses the building’s potable water supply and waste systems. A mechanical code that addresses the building’s combustion and mechanical equipment. An electrical code that addresses the installation of electrical wiring and equipmentin buildings, and a gas code that does the same for the installation of gas piping andgas-burning equipment. An energy code that addresses all parts of the building that consume energy or con tribute to the consumption of energy. Other specialty regulations, such as an accessibility code, that address buildingaccessibility to the physically disabled.Because of the technical complexity of these codes and the time and money needed tokeep them updated, most state and local governments have abandoned the developmentand maintenance of their own codes, and rely on adoption (with or without amendment)of a model code (developed by a regional or national association). These codes make useof extensive references to voluntary consensus standards on design methods, test methods,materials, and systems. By reference, these standards become part of the building regulatorysystem. These codes typically are enforced at the local level in a process that begins withthe application for a building or construction permit, followed by plan review, permitissuance, inspections, and certificate of occupancy issuance.At times, a related but different set of regulations that control the use and maintenance ofexisting buildings is packaged with the above measures. Since parts of these codes mayoverlap with plumbing, mechanical, or electrical codes, some aspects of operation andmaintenance may be included in the codes. They generally can be described as follows:Cityscape 23

Listokin and Hattis A fire prevention code, sometimes called a fire code, that regulates the building’s firesafety throughout its occupancy and use. A housing code that regulates the health and sanitation of residential buildingsthroughout their occupancy and use. A property maintenance code that expands the scope of the housing code to includeother types of buildings. A hazard abatement code that identifies building conditions that are so hazardousthat immediate remedial action may be required.These codes are generally enforced at the local level by means of periodic inspectionsand citation of violations. An existing property that is rehabilitated typically will have tosatisfy building, plumbing, mechanical, and sister codes as well as the fire, housing,property, and hazard codes.Retroactive regulations form another category, generally addressing hazards in existingbuildings that, while not necessarily imminent, are identified by society as needing reme diation. Some examples of such regulations are the enclosure of open stairs in publicbuildings, the installation of sprinklers, and the reinforcement of unreinforced masonrybuildings in zones of high seismicity. Because of the extremely high costs imposed bysuch regulations on building owners, retroactive regulations are quite rare and local innature.In this article, the term building code is broadly used to refer to the entire set of interre lated building-related requirements described above, although such usage may not betechnically correct.Historical DevelopmentThe current building regulatory system in the United States is the product of severaldiverse trends. From a historical perspective, it may be thought of as resting on fourfoundations, supported by three buttresses. Allegorically, then, the system rests on thefollowing four foundations:1.The insurance industry.2.The tenement and housing movements.3.The engineering profession.4.The construction industry.The following three buttresses support the foundation of the system:1.The federal government.2.The model code groups.3.The voluntary consensus standards organizations.The Insurance IndustryIn the 19th century, the insurance industry regulated fire safety in buildings with an insti tutional framework created to regulate, as well as to provide research and technical support.For more than 50 years, the regulation of fire safety in buildings has been a function ofstate or local governments, while some of those original insurance-related organizations24 Cityscape

Building Codes and Housingcontinue to perform regulatory support functions to this day: the National Board of FireUnderwriters (today called the American Insurance Association), the National Fire ProtectionAssociation (NFPA), and Underwriters Laboratories Inc. These organizations were firstconcerned with property risk and the risk of conflagration. Concern for life safety becamearticulated and institutionalized in 1913. In 1905, the National Board of Fire Underwritersdeveloped and published the first model building code in the United States. The NationalBuilding Code, which also included housing and structural requirements in addition tofire safety, was updated and published until 1976.The insurance industry also was the earliest regulator of electrical safety in building,consolidating the diversity of early local regulations when many entities came togetherto create the first National Electrical Code in 1897 in a conference that anticipatedtoday’s consensus processes. The National Electrical Code has been periodically updatedto this day and has been published exclusively by NFPA since 1965.Today, in addition to the continued activities of the early organizations, other insuranceindustry organizations continue to be active in the building regulatory arena. The Institutefor Business & Home Safety was created specifically to support the development of reg ulations in the natural disaster areas of earthquakes, hurricanes, and floods. The InsuranceServices Office, Inc., evaluates building code enforcement programs in states and localjurisdictions throughout the United States and provides relative ratings to assist withinsurance underwriting.The Tenement and Housing MovementsTenement and housing movements arose in various U.S. cities toward the end of the 19thcentury in response to blatantly unhealthy housing conditions. In 1900, many charitableorganizations joined tog 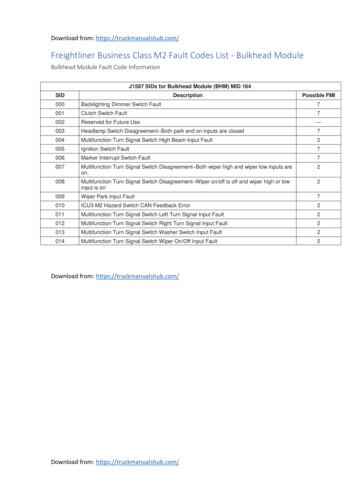 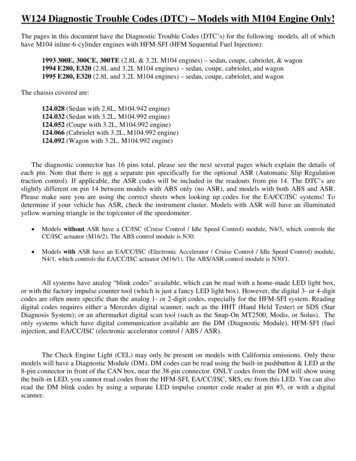 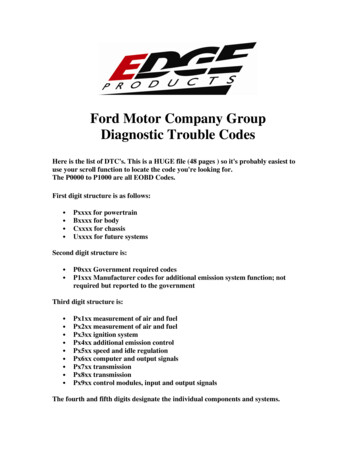 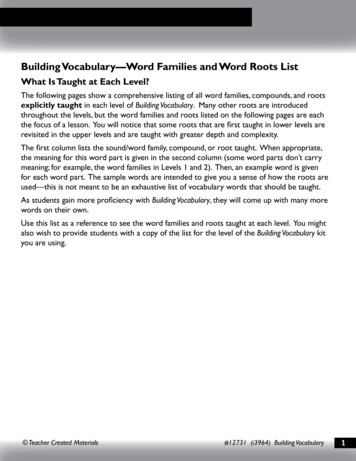 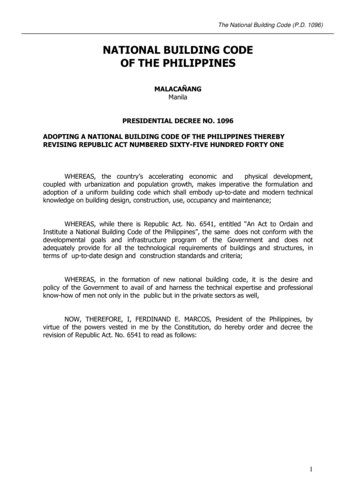 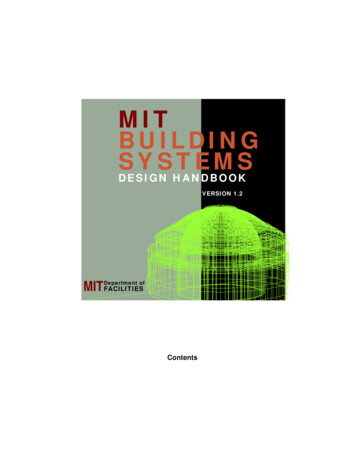 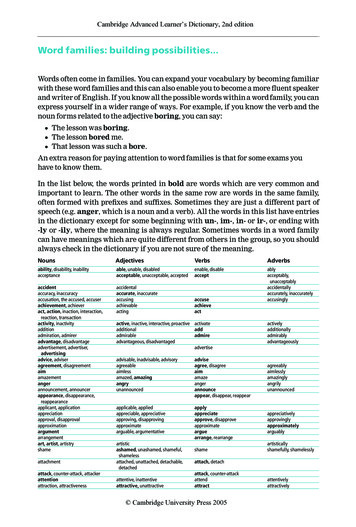 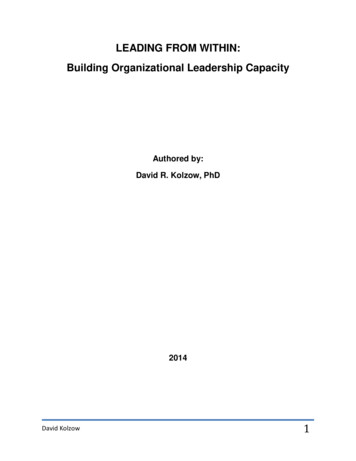 LEADING FROM WITHIN: Building Organizational Leadership . 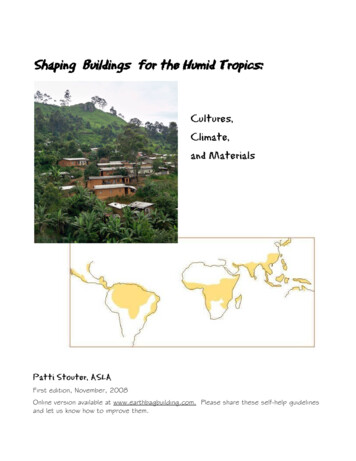