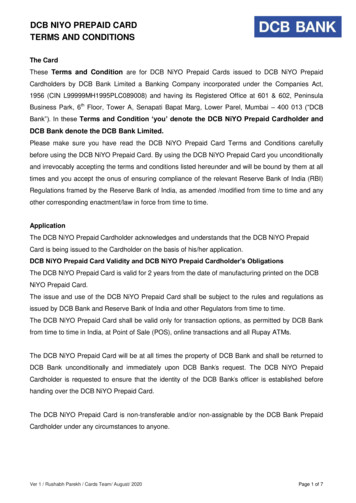 DCB NIYO PREPAID CARDTERMS AND CONDITIONSThe DCB NiYO Prepaid Cardholder will inform DCB Bank in writing about any irregularities ordiscrepancies that exist in the transaction details at an ATM or merchant establishment / onlinetransactions within 7 days of the transaction processed. If no such notice is received during this time,DCB Bank will assume the correctness of transaction.Fees:Transaction fees for cash withdrawal, balance enquiry and, or other transactions whereverapplicable, will be debited to the DCB NiYO Prepaid Card at the time of posting debit entry of thetransaction amount or at the end of the day.The charges / fees applicable on the usage of the DCB NiYO Prepaid Card maybe revised/changedby the DCB Bank and Finnew Solutions Private Limited from time to time without prior intimation tothe DCB NiYO Prepaid Cardholder(s).Any charges/fees appearing in this terms and condition does not include Service Tax and, or anyother cess or taxes, the same may be collected in addition to such fees or charges as applicablefrom time to time.Lost or Stolen DCB NiYO Prepaid CardIn the event that the DCB NiYO Prepaid Card is lost or stolen, the occurrence must be reported toDCB Bank 24 Hour Customer Care immediately by fastest means of communication followed with awritten communication. A copy of the acknowledged police complaint must accompany the saidwritten communication.You hereby undertake to indemnify DCB Bank and Sienna fully against any liability / (civil orcriminal), loss, cost, expenses or damage (including the attorney fees) that may arise due to loss ormisuse of the Card in the event that it is lost / stolen and not reported to the Bank, or lost andmisused before DCB Bank is informed. Provided you have in all respect complied with the terms andconditions, a replacement DCB NiYO Prepaid Card may be issued at the sole desecration of DCBBank at the applicable fee.If it is determined that you were grossly negligent or fraudulent in handling of the DCB NiYO PrepaidCard, DCB Bank would not entertain any request for refund/reimbursement of fraudulent usage ofthe lost/stolen DCB NiYO Prepaid Card. If any amount is credited to your DCB NiYO Prepaid Cardbased on your representation and, or any information provided by you, DCB Bank would recover theVer 1 / Rushabh Parekh / Cards Team/ August/ 2020Page 3 of 7

DCB NIYO PREPAID CARDTERMS AND CONDITIONSThe DCB NiYO Prepaid Cardholder will be liable and responsible for all the cost associated with thecollection of dues, legal expenses (if it becomes necessary to refer the matter to any agent), orwhere legal resources have been utilized in the resolution of a dispute.Rupay PaySecureDescription of PaySecurePaySecure by Rupay provides you with a way of increasing security for online transactions byreducing the chance of fraud for those transactions. Registering for PaySecure involves providingpersonal information to DCB Bank, which is then used to confirm your identity for future onlinetransactions for which PaySecure is used. PaySecure also may be used for record keeping andreporting purposes, as well as to help resolve transaction disputes.Limitation of LiabilityYou acknowledge and agree that, except as otherwise provided by any applicable laws DCB Bankshall not be liable and responsible for any loss or damage arising from your failure to comply withthese terms and conditions.You agree that DCB Bank shall not be liable and responsible to you or to any third party for anymodification; suspension or discontinuance of PaySecure.Under no circumstances will DCB Bank be liable for consequential, incidental, special or indirectlosses or other damages, such as any damage to your computer or telephone service resulting fromyour use of PaySecure.DCB Bank will assumes no responsibility for, and will not be liable for, any damage to, or any viruseswhich may affect, your computer equipment or other property on account of your access to, use of,or downloading from, the said websites.You agrees that „online alerts‟ are sent by DCB Bank to the mobile number registered for SMSalerts with DCB Bank and you shall take steps to get registered for SMS alerts to receive alerts fortransactions done on your DCB NiYO Prepaid Cardholder Card.Ver 1 / Rushabh Parekh / Cards Team/ August/ 2020Page 5 of 7

DCB NIYO PREPAID CARDTERMS AND CONDITIONSDisclaimer of WarrantiesYou expressly understands and agrees that any software obtained through the use of PaySecure isdownloaded and used at your own discretion and risk and responsibility and that except as otherwiseprovided in the Terms and Condition, you will be solely liable and responsible for any damage toyour computer system or loss of data that results from the download or use of any such software orother materials through PaySecure.EXCEPT AS OTHERWISE REQUIRED BY ANY APPLICABLE LAW, DCB BANK MAKES NOREPRESENTATIONS OR WARRANTIES ABOUT PaySecure AND ANY KIND, EXPRESS ORIMPLIED, INCLUDING ANY WARRANTIES AS MERCHANTABILITY OR FITNESS FOR APARTICULAR PURPOSE. PaySecure is provided and made available to you on an “as is” basis.Schedule of charges of DCB NiYO Blue Card (Prepaid Card)Sr.NoParticulars1Joining Fees238Monthly FeesAnnual FeesReissue of lost/stolen/damagedCardReissue Card PINCash Withdrawal at other thanDCB ATMBalance Enquiry at other than DCBATMLate Payment Fee9DCB ATM Cash Withdrawal FeeNIL101112DCB ATM Balance Enquiry Feee-Statement RequestPetrol Transaction ChargeNILNIL2.5% of transaction13Rail Ticket Booking/CancellationSurcharge2.5% of transaction14Account Closure ChargesNIL45671516Existing ChargesINR NIL / INR 250 at the time ofIssuanceNILINR NIL / INR 200INR NIL / INR 200 per instanceNILINR 20 per transactionINR 10 per transactionNILQuarterly Card Maintenance Fee(applicable if there are no customerINR 50 per quarterinduced transactions in last 90 daysor the quarter)Fund Transfer Fee (within India)Transaction Amountof INR 0 to INR 2500Transaction Amountof INR 2501 to INR 5000Ver 1 / Rushabh Parekh / Cards Team/ August/ 2020INR 10 per transactionINR 15 per transactionPage 6 of 7

DCB NIYO PREPAID CARDTERMS AND CONDITIONSTransaction Amountof more than INR 5,000INR 20 per transaction** all charges are exclusive of taxesDCB Bank at its discretion may reduce or waive any of the above fees. Such offers shall becommunicated at the time of sourcing.The aforementioned Terms and Condition are subject to change from time to time at the solediscretion of DCB Bank. For updated Terms and Condition, you may visit DCB Bank‟s website.Ver 1 / Rushabh Parekh / Cards Team/ August/ 2020Page 7 of 7