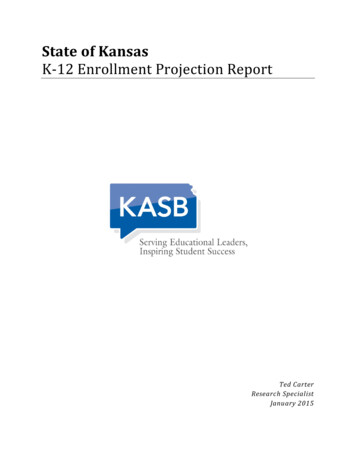 IntroductionThis document contains headcount enrollment projections for the State of Kansas for the 2015-16school year through the 2019-20 school year. These projections are based on resident live births inKansas and the headcount enrollment data for previous school years. For more information on themethods used, refer to Appendix A.Enrollment HeadcountsAs Chart 1 and Table 1 show, student enrollment in Kansas is expected to continue the trend of gradualincrease from approximately 526,000 students in 2014-15 to approximately 562,000 students in 201920. Changes across grades are expected to be fairly consistent, with no grades showing patternssignificantly different than the rest.Chart 1: Actual and Projected Enrollments by Grade600,000500,000Students h200,0005th4th3rd100,0002nd1st-KGSchool YearNote: Other represents non-graded students and students in grade categories other than K-12.Page 4 of 18

Table 1: Actual and Projected Enrollments by 6,68938,20638,58340,27012th 561,906As Table 2 shows, headcount enrollment for students in grades other than K-12 is expected to increasethrough the 2019-20 school year from approximately 25,000 students to approximately 30,000 students.Table 2: Actual and Projected Enrollments by Other Student GroupsYear Daycare SpEd 3-4 yr 4 yr At 8-198,1378,8062019-208,2578,839Pre-K NonGraded Total ,906As Charts 2 through 4 and Tables 3 and 4 show, there are no major changes in the trends for students ineach race/ethnicity category, students eligible for free lunch (FL), students eligible for reduced-pricelunch (RPL), students not eligible for services under the National School Lunch Program (FPL), specialeducation students (Sped), non-special education students (Non-Sped), and students receiving servicesfor English Language Services (ELL) from the 2014-15 school year through the 2019-20 school year.Page 5 of 18

Chart 2: Actual and Projected Enrollments byRace/Ethnicity600,000500,000OtherAsianAm IndianHispanicStudents ool YearTable 3: Actual and Projected Enrollments 60729,35422,02124,29424,03325,73325,212The projection report produced by KASB in July suggested the percent of students in the state who areof Hispanic ethnicity could increase to 22 percent by the 2018-19 school year. The current reportestimates the percent will remain fairly constant from the current year through the 2019-20 school yearPage 6 of 18

at approximately 18 percent. The reasons for this apparent discrepancy are a) the previous report wasbased on data through the 2013-14 school year whereas the current report is based on data through the2014-15 school year, and b) the current report utilizes different calculations. For more information onthis, as well as details regarding the accuracy of the projections, refer to Appendix A.Chart 3: Actual and Projected Enrollments byNational School Lunch Program Eligibility600,000500,000Students l YearPage 7 of 18

ConclusionBased on the available data related to resident live births by county and previous school yearenrollments, student enrollment in Kansas is expected to increase from approximately 526,000 studentsin 2014-15 to approximately 562,000 students in 2019-20. Trends by grade level and programparticipation are expected to be consistent with previous years.Page 9 of 18

Appendix A: MethodologyThe following describes the methods used for developing the Enrollment Projections contained in thisreport. This method is based on the one used by KASB for many years, but has been enhanced andexpanded as of the 2014-15 school year.Initial DataKASB acquires enrollment counts from the Kansas State Department of Education (KSDE) via their K-12School Reports page (http://svapp15586.ksde.org/k12/k12.aspx).KASB acquires county-level birth data by month from the Kansas Department of Health and Environmentvia their Annual Summary of Vital Statistics (www.kdheks.gov/hci/annsumm.html).Ratio of Birth to First Grade EnrollmentTotal resident live births by state and school year are calculated using monthly births from September ofone year through August of the following year; consistent with the birth dates used to determine age ofeligibility for attending first grade. The birth data by county is then tied to the state-level enrollmentdata.Because of some of the challenges with kindergarten data, KASB utilizes a ratio of births by school yearto first grade enrollments seven years later; when the children would be turning seven years old andtherefore be eligible for first grade enrollment.This ratio, which serves as a comparison between children born in the state to the number of studentsenrolling in first grade within the state seven years later, serves as the basis for the enrollmentestimates for the state. Limitations of this ratio include the fact that it does not take into accountchildren moving into or out of the state’s boundaries.In order to estimate the first grade enrollment numbers for future years, a five-year rolling average isutilized. Such an average is calculated by determining the average ratio for the past five years in order tocreate the ratio for the first year of the projection, then taking the ratio for the past four years plus theratio calculated for the first year of the projection and averaging them in order to create the ratio forthe second year of the projection, and so forth. Rolling averages are commonly utilized in order tominimize the impact of short-term fluctuations or deviations on the overall projections.The calculated ratios for five years’ worth of school years are then applied to the actual resident livebirths in order to determine estimated first grade enrollment numbers at the state level.Table B1 shows the actual and projected birth to first grade ratios and numbers at the district level.Chart B1 shows, at the district level, the actual and projected first grade enrollment numbers.Cohort Survival RatiosFor all other grade levels 2 through 12 at the state and district level, a cohort survival ratio is calculatedand utilized. The cohort survival ratio determines the relationship between the number of students at aparticular grade level one year and the number of students at the next grade level the following year.Page 10 of 18

Chart A1 shows the actual headcount enrollment for the State of Kansas along with the projectedheadcount enrollments calculated each year from 2003-04 through 2014-15Chart A1: Projection 996-971995-961994-951993-941992-93460,000As Chart A1 above and Table A1 below show, the projections are more accurate the first year out thanthe fifth year because as the time between the calculation of the projection and the year projectedincreases, the likelihood of other factors influencing the overall total increases. On average the firstyear calculations using this calculation were approximately 1 percent below the actual enrollmentnumbers, whereas on average the fifth year projections were 2.3 percent under the actual enrollmentnumbers. It is also important to note that this calculation methodology consistently under-estimatesthe actual headcount enrollments for the state.Table A1: Projection ion-0.96%-1.29%-1.50%-1.79%-2.31%Page 12 of 18

Geography QuickFactsLand area in square miles, 2010Persons per square mile, 2010FIPS CodeMetropolitan or Micropolitan Statistical AreaKansas81,758.7234.920Includes persons reporting only one race.Hispanics may be of any race, so also are included in applicable race categories.FN: Footnote on this item for this area in place of dataNA: Not availableD: Suppressed to avoid disclosure of confidential informationX: Not applicableS: Suppressed; does not meet publication standardsZ: Value greater than zero but less than half unit of measure shownF: Fewer than 100 firmsSource: US Census Bureau State & County QuickFactsTable C1: Actual and Projected Page 16 of 18