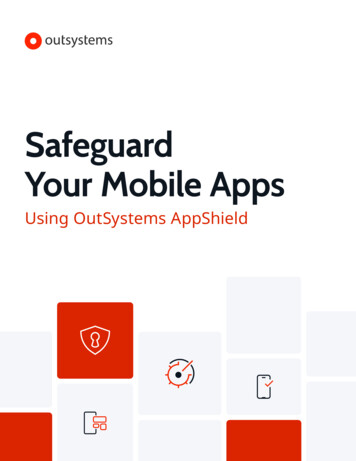 SAFEGUARD YOUR MOBILE APPS USING OUTSYSTEMS APPSHIELDCybercriminals now target B2C mobile applications more aggressively, leading to downtime,data exposure, intellectual property theft, and damage to brand reputation. The data exposureand breaches they cause can expose companies to hefty regulatory fines, depending on theirgeography or industry: GDPR: 20 mil, or 4% of annual revenue PCI DSS: Fines up to 100,000 a month until compliance is achieved HIPAA: Fines up to 50,000 per violation California Privacy Act: Fines up to 7,500 per violation PSD2: Member states to define punishment for violating the lawAt the same time, building mobile applications that are protected from threats is not easy andrequires highly specialized skills. There are no free or open-source solutions available. Going toa third party for a solution is one option for protection, but that can become costly. For example,the cost to secure a mobile app with fewer than 1 million users can be up to 200,000 perapplication per year. For apps with more than 1 million users, the cost is even higher.To help you safeguard the mobile apps you build with our modern application platform,OutSystems offers AppShield.2

SAFEGUARD YOUR MOBILE APPS USING OUTSYSTEMS APPSHIELDWhat Is OutSystems AppShield?Mobile devices are like laptop computers used for remote work, and mobile applications arelike the software downloaded onto those machines. Your company can take certain securityprotections for the laptops, such as requiring a VPN, training employees on security practices,and protecting their software. But it just takes one email with a malicious link or the download ofan unapproved application that solves an immediate problem to take down a network or unleashransomware. Mobile applications are now being used as similar entry points into backend anddata systems.OutSystems AppShield, an additional cost add-on, automatically provides extra layers of securityduring the build process, making applications more resistant to intrusion, tampering, and reverseengineering. One of its compelling advantages is that it protects all the mobile apps you buildusing OutSystems — unlike the solutions that only protect one application. It also goes aboveand beyond industry standards to ensure your mobile apps are even better equipped to combatmodern attacks.3

SAFEGUARD YOUR MOBILE APPS USING OUTSYSTEMS APPSHIELDSecure Your Mobile Apps Faster With These FeaturesAppShield and its features support a software development lifecycle (SDLC). Also, OutSystemscontinuously monitors the latest security attack methodologies and evolves OutSystems AppShield tocombat them. Here are the main protections it currently offers for Android and iOS operating systems.AndroidThe protection available for Android builds includes: Root detection: Rooting an Android device allows anyone to gain access to normally restricteddata, but it also puts the device at risk. Root detection lets you know if this is the case. Repackaging detection: Repackaging is when attackers obtain a copy of your app’s sourcecode, add malicious functions to it, and redistribute it to users. Detection allows you to protectyour app from these evil twins. Code obfuscation: Obfuscation makes your source code more complicated, preventinghackers from reading it like the Sunday paper. Code injection protection: Attackers can take advantage of user inputs to take commandof your app and make it execute as they wish. Code injection protection blocks these attacks,stopping them from making your app perform functions you never intended. Debugger protection: To hack your app, first an attacker must know how it works. One ofthe best ways to find out is with a debugger. Protection prevents hackers from using thistroubleshooting software against you. Emulator detection: Emulators that simulate mobile operating systems are valuablefor testing applications, but hackers can use them to look for entry points into your app.Emulator detection can let you know if your emulator is putting your app at risk of beingcracked by those you want to keep out.5

SAFEGUARD YOUR MOBILE APPS USING OUTSYSTEMS APPSHIELD Keylogger protection: Sometimes used by employers or parents to monitor users, hackersinstall keyloggers to steal sensitive info like passwords and account numbers. Protectionprevents them from stealing your data from under your fingertips. Screenshot protection: Protect your app from malware that sends screenshots of personalinformation or your digital wallet to bad actors. Task hijacking protection: Task hijacking is a way to exploit Android apps when they’reidling in the background. Malware asserts itself at the top of an app’s back stack, or itshistory of actions. When the user hits the back button, the malware will send them to amalicious app in disguise.iOSApple iPhones and iOS applications are somewhat harder to hack than Android because iOS isonly deployed on mobile devices from one manufacturer. However, there are ways to hack iOSand apps from the Apple AppStore. Like Android, iOS apps also need these protections providedby AppShield: Repackaging detection Code injection protection Debugger protection Screenshot protectionMost importantly, the protection available from AppShieldfor iOS builds includes jailbreak detection. Like rooting,jailbreaking an iPhone gives the user access to restricted dataareas on the device, also compromising the device. AppShieldcan let you know if this is the case so you can determine howyour app will proceed.6

SAFEGUARD YOUR MOBILE APPS USING OUTSYSTEMS APPSHIELDFully Integrated, Code-Free DeploymentWith AppShield, you’ll never again have to make the difficult decision between app security andtime to market.The real “secret sauce” of OutSystems AppShield is its seamless, pre-built integration with ourMobile Application Build Service (MABS). After a simple initial setup that only takes minutes, iOSand Android applications packaged and released with MABS will automatically include OutSystemsAppShield’s advanced protections, making it an essentially code-free and hands-off experience.What Risks Does AppShield Address?OWASP, or the Open-Web Security Project, is a non-profit foundation dedicated to identifying andaddressing the biggest risks in software security. Helmed by cybersecurity leaders from across theglobe, OWASP works to catalog the best security measures to promote better practices among thedevelopment community. AppShield addresses a number of OWASP’s top ten security risks.Let’s take a look.Protecting Against Improper Platform Usage (OWASP M1)When you’re building an app for a mobile OS, there are standards to its build. If you don’t meetthem on iOS, your app will never make it to the App Store. Google’s Android OS is more open, butthere are still guidelines. When apps don’t meet these standards, it’s a security risk that OWASPhas identified as improper platform usage. Therefore, if an app is run on a rooted or jailbrokendevice or through an emulator, suddenly your air-tight build is in jeopardy. That’s why AppShieldadds on root and jailbreak detection, blocks emulators, and identifies the permissions enabledon the device—providing an extra layer of security.7

SAFEGUARD YOUR MOBILE APPS USING OUTSYSTEMS APPSHIELDAddressing Insufficient Cryptography (OWASP M5)Encryption is the root of any security strategy. Source code is scrambled, transferred, and decryptedon the other end with a key. Not all encryption algorithms are created equal, and OWASP identifiesthis issue as insufficient cryptography. If an attacker can break the encryption and see your app’scode, that’s when they can exploit it. Hackers can also use a jailbroken iPhone to freeze an app afterthe device decrypts it but before it loads, granting access to your unscrambled source code. Jailbreakdetection in AppShield prevents foul play. And if a cybercriminal does break through, AppShieldblocks the copying of local data. AppShield also includes proper encryption, repackaging protectionand ensures security mechanisms can’t be removed from your app.Ensuring Client Code Quality (OWASP M7)If your app’s code isn’t high quality, attackers can use your app against you. They might try a bufferoverflow or code injection attack. OWASP identifies this as client code quality. When OutSystemsgenerates your code, you can be sure it’s up to snuff. But say you coded a custom addition toyour mobile application by hand, or you’re plugging in third-party code that isn’t up to standard.In these cases, AppShield gives you the extra protection you need. It includes code injectionprotection, repackaging detection, and verification of the application signature. It removes debuginformation from the application code and blocks debugger and emulator access. It also allows thereport of security controls and device anomalies to application code for specific handling.8

SAFEGUARD YOUR MOBILE APPS USING OUTSYSTEMS APPSHIELDPreventing Code Tampering (OWASP M8)Should an attacker gain access to your app’s source code, they might try a tactic called snooping—or copying your code, adding malicious functionality, and masquerading as you on third-partyapp stores. OWASP calls this code tampering, but you can think of it as app identity theft. WithAppShield, you can be certain nobody but you can get access to your code, preventing them frommodifying it and tainting your good name. How’s that? AppShield stops copycats in their tracks withroot, jailbreak, and repackaging detection. Also, it blocks hackers from accessing debuggers andemulators and using them to find entry points to your data.Preventing Reverse Engineering (OWASP M9)The easiest way to break something is to see what makes it work. In cybersecurity, that meansreverse engineering. AppShield includes code obfuscation and blocks debugger and emulator access,thus preventing reverse engineering of your mobile app, so you can keep your code to yourself.Is OutSystems AppShield Right for My Organization?Web and mobile applications built using OutSystems already include an extensive set of built-insecurity features and are protected by default from the top security threats identified byOWASP. So, the fact of the matter is, not every application needs advanced app protection.Answering these questions can help you determine if AppShield is right for you:1. What sensitive data and features, such as a private key, token, and user-input (password,credit card, account number) are used by the app that you need to protect?2. How is your app security structured to prevent data leakage from compromised devices?3. How capable are you of maintaining your app’s integrity and security?4. How are you preventing your app from being repackaged and redistributed with malware?9

SAFEGUARD YOUR MOBILE APPS USING OUTSYSTEMS APPSHIELD5. How is the content of your app protected from screen readers and other apps that mighttroll for data?6. How are you protecting against various methods of credential theft?7. What measures are you taking to protect your app from the growing number of mobilemalware threats?8. How are you protecting your app from hooking mechanisms that capture API calls thatinclude parameters that reveal user authentication credentials?9. How are you preventing code injections into your app?State-of-the-Art Protection From State-of-the-Art AttacksSecurity is crucial in app development. AppShield is the suit of armor that goes over thechainmail—the extra layer of defense to protect your applications from advanced attackers.As they get better at breaking in, we get better at keeping them out. Implementation is easyand requires little maintenance, and that means developers can spend their time makingsure apps are built fast and built right, without worrying about security gaps.If your organization is handling sensitive data, is subject to privacy regulation, or works in anindustry where security is priority number one, AppShield will provide the next-level protectionyou need.To see AppShield in action, check out our Accelerate Secure Mobile App Dev withOutSystems webinar.www.outsystems.com Copyright OutSystems 2021. All rights reserved. OutSystems and the OutSystems logo are registered trademarks of OutSystems. All other trademarksare the property of their respective companies. Unauthorized copying or distributing is a violation of copyright law.10

Getting Started with Quick Base