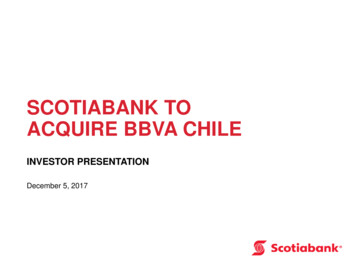 CAUTION REGARDING FORWARD-LOOKING STATEMENTSOur public communications often include oral or written forward-looking statements.Statements of this type are included in this document, and may be included in other filings withCanadian securities regulators or the U.S. Securities and Exchange Commission, or in othercommunications. All such statements are made pursuant to the “safe harbor” provisions of theU.S. Private Securities Litigation Reform Act of 1995 and any applicable Canadian securitieslegislation. Forward-looking statements may include, but are not limited to, statements madein this document, the Management’s Discussion and Analysis in the Bank’s 2017 AnnualReport under the headings “Outlook” and in other statements regarding the Bank’s objectives,strategies to achieve those objectives, the regulatory environment in which the Bank operates,anticipated financial results (including those in the area of risk management), and the outlookfor the Bank’s businesses and for the Canadian, U.S. and global economies. Such statementsare typically identified by words or phrases such as “believe,” “expect,” “anticipate,” “intent,”“estimate,” “plan,” “may increase,” “may fluctuate,” and similar expressions of future orconditional verbs, such as “will,” “may,” “should,” “would” and “could.”By their very nature, forward-looking statements involve numerous assumptions, inherent risksand uncertainties, both general and specific, and the risk that predictions and other forwardlooking statements will not prove to be accurate. Do not unduly rely on forward-lookingstatements, as a number of important factors, many of which are beyond the Bank’s controland the effects of which can be difficult to predict, could cause actual results to differmaterially from the estimates and intentions expressed in such forward-looking statements.These factors include, but are not limited to: the economic and financial conditions in Canadaand globally; fluctuations in interest rates and currency values; liquidity and funding; significantmarket volatility and interruptions; the failure of third parties to comply with their obligations tothe Bank and its affiliates; changes in monetary policy; legislative and regulatorydevelopments in Canada and elsewhere, including changes to, and interpretations of tax lawsand risk-based capital guidelines and reporting instructions and liquidity regulatory guidance;changes to the Bank’s credit ratings; operational (including technology) and infrastructurerisks; reputational risks; the risk that the Bank’s risk management models may not take intoaccount all relevant factors; the accuracy and completeness of information the Bank receiveson customers and counterparties; the timely development and introduction of new productsand services; the Bank’s ability to expand existing distribution channels and to develop andrealize revenues from new distribution channels; the Bank’s ability to complete and integrateacquisitions and its other growth strategies; critical accounting estimates and the effects ofchanges in accounting policies and methods used by the Bank as described in the Bank’sannual financial statements (See “Controls and Accounting Policies—Critical accountingestimates” in the Bank’s 2017 Annual Report) and updated by quarterly reports; global capitalmarkets activity; the Bank’s ability to attract and retain key executives; reliance on third partiesto provide components of the Bank’s business infrastructure; unexpected changes inconsumer spending and saving habits; technological developments; fraud by internal orexternal parties, including the use of new technologies in unprecedented ways to defraud theBank or its customers; increasing cyber security risks which may include theft of assets,unauthorized access to sensitive information or operational disruption; anti-money laundering;consolidation in the financial services sector in Canada and globally; competition, both fromnew entrants and established competitors; judicial and regulatory proceedings; naturaldisasters, including, but not limited to, earthquakes and hurricanes, and disruptions to publicinfrastructure, such as transportation, communication, power or water supply; the possibleimpact of international conflicts and other developments, including terrorist activities and war;the effects of disease or illness on local, national or international economies; and the Bank’santicipation of and success in managing the risks implied by the foregoing. A substantialamount of the Bank’s business involves making loans or otherwise committing resources tospecific companies, industries or countries. Unforeseen events affecting such borrowers,industries or countries could have a material adverse effect on the Bank’s financial results,businesses, financial condition or liquidity. These and other factors may cause the Bank’sactual performance to differ materially from that contemplated by forward-looking statements.For more information, see the “Risk Management” section of the Bank’s 2017 Annual Report.Material economic assumptions underlying the forward-looking statements contained in thisdocument are set out in the 2017 Annual Report under the headings “Outlook”, as updated byquarterly reports. The “Outlook” sections are based on the Bank’s views and the actualoutcome is uncertain. Readers should consider the above-noted factors when reviewing thesesections. The preceding list of factors is not exhaustive of all possible risk factors and otherfactors could also adversely affect the Bank’s results. When relying on forward-lookingstatements to make decisions with respect to the Bank and its securities, investors and othersshould carefully consider the preceding factors, other uncertainties and potential events. Theforward-looking statements contained in this document are presented for the purpose ofassisting the holders of the Bank’s securities and financial analysts in understanding theBank’s financial position and results of operations as at and for the periods ended on thedates presented, as well as the Bank’s financial performance objectives, vision and strategicgoals, and may not be appropriate for other purposes. Except as required by law, the Bankdoes not undertake to update any forward-looking statements, whether written or oral, thatmay be made from time to time by or on its behalf.2

BBVA CHILE - TRANSACTION HIGHLIGHTSTRANSACTIONWITH BBVAOWNERSHIPCONSIDERATIONS Binding agreement signed with Banco Bilbao Biscaya Argentaria (“BBVA”) to acquire 68.19% of BBVA’sbank in Chile (“BBVA Chile”) for US 2.0 billion in cash (C 2.6 billion) Price adjustment dollar for dollar to reflect change in retained earnings since December 2016 until closing Said family has waived its Right of First Refusal on BBVA’s interest in BBVA Chile. We are offering the Said family the opportunity to contribute its existing stake in BBVA Chile and to invest US 500 million (C 650 million) to remain as a 25% minority shareholder in MergeCo Under this scenario, Scotiabank to own 75% of MergeCo resulting in a net cash outlay of US 1.7 billion(C 2.2 billion) Said family’s ultimate ownership in MergeCo could therefore be zero or any amount up to 25% If the Said family decides to remain as a minority shareholder in MergeCo, Scotiabank and Said family haveagreed on a term sheet that will form a shareholders agreement defining certain corporate governancematters including board representation and customary minority protections applicable to this scenario Acquisition of BBVA’s 68.19% stake in BBVA Chile expected to close in Q3 2018, subject to customaryconditions and regulatory approvals Merger of Scotiabank Chile and BBVA Chile expected to occur in Q4 2018GOVERNANCETIMELINES1Scotiabank will be required to launch a mandatory tender offer for the remaining sharesTransaction also includes the acquisition of BBVA’s insurance company and certain support subsidiariesTotal estimated price at closing to BBVA is US 2.2 billion ( C 2.9 billion)Transaction values BBVA Chile at 2.1x 2017 Book Value and 18x Price / 2017 LTM Earnings1Scotiabank Chile to ultimately merge with BBVA Chile (“MergeCo”)The Said family retains its rights to sell all or a portion of its shares in BBVA Chile under the terms of themandatory tender offer at closingAs of September 20173