For Use In JBI Systematic Reviews Checklist For Qualitative Research 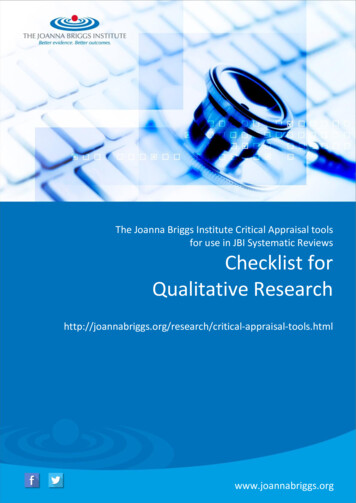 The Joanna Briggs InstituteIntroductionThe Joanna Briggs Institute (JBI) is an international, membership based research and developmentorganization within the Faculty of Health Sciences at the University of Adelaide. The Institute specializesin promoting and supporting evidence-based healthcare by providing access to resources forprofessionals in nursing, midwifery, medicine, and allied health. With over 80 collaborating centres andentities, servicing over 90 countries, the Institute is a recognized global leader in evidence-basedhealthcare.JBI Systematic ReviewsThe core of evidence synthesis is the systematic review of literature of a particular intervention,condition or issue. The systematic review is essentially an analysis of the available literature (that is,evidence) and a judgment of the effectiveness or otherwise of a practice, involving a series of complexsteps. The JBI takes a particular view on what counts as evidence and the methods utilized to synthesizethose different types of evidence. In line with this broader view of evidence, the Institute has developedtheories, methodologies and rigorous processes for the critical appraisal and synthesis of thesediverse forms of evidence in order to aid in clinical decision-making in health care. There now existsJBI guidance for conducting reviews of effectiveness research, qualitative research,prevalence/incidence, etiology/risk, economic evaluations, text/opinion, diagnostic test accuracy,mixed-methods, umbrella reviews and scoping reviews. Further information regarding JBI systematicreviews can be found in the JBI Reviewer’s Manual on our website.JBI Critical Appraisal ToolsAll systematic reviews incorporate a process of critique or appraisal of the research evidence. Thepurpose of this appraisal is to assess the methodological quality of a study and to determine the extentto which a study has addressed the possibility of bias in its design, conduct and analysis. All papersselected for inclusion in the systematic review (that is – those that meet the inclusion criteria describedin the protocol) need to be subjected to rigorous appraisal by two critical appraisers. The results of thisappraisal can then be used to inform synthesis and interpretation of the results of the study. JBI Criticalappraisal tools have been developed by the JBI and collaborators and approved by the JBI ScientificCommittee following extensive peer review. Although designed for use in systematic reviews, JBI criticalappraisal tools can also be used when creating Critically Appraised Topics (CAT), in journal clubs and asan educational tool. Joanna Briggs Institute 2017Critical Appraisal Checklist 2for Qualitative Research

Discussion of Critical Appraisal CriteriaHow to cite: Lockwood C, Munn Z, Porritt K. Qualitative research synthesis: methodologicalguidance for systematic reviewers utilizing meta-aggregation. Int J Evid Based Healthc.2015;13(3):179–187.1.Congruity between the stated philosophical perspective and the research methodologyDoes the report clearly state the philosophical or theoretical premises on which the study isbased? Does the report clearly state the methodological approach adopted on which the studyis based? Is there congruence between the two? For example:A report may state that the study adopted a critical perspective and participatory actionresearch methodology was followed. Here there is congruence between a critical view (focusingon knowledge arising out of critique, action and reflection) and action research (an approachthat focuses on firstly working with groups to reflect on issues or practices, then consideringhow they could be different; then acting to create a change; and finally identifying newknowledge arising out of the action taken). However, a report may state that the study adoptedan interpretive perspective and used survey methodology. Here there is incongruence betweenan interpretive view (focusing on knowledge arising out of studying what phenomena mean toindividuals or groups) and surveys (an approach that focuses on asking standard questions to adefined study population); a report may state that the study was qualitative or used qualitativemethodology (such statements do not demonstrate rigour in design) or make no statement onphilosophical orientation or methodology.2.Congruity between the research methodology and the research question or objectivesIs the study methodology appropriate for addressing the research question? For example:A report may state that the research question was to seek understandings of the meaning ofpain in a group of people with rheumatoid arthritis and that a phenomenological approach wastaken. Here, there is congruity between this question and the methodology. A report may statethat the research question was to establish the effects of counselling on the severity of painexperience and that an ethnographic approach was pursued. A question that tries to establishcause-and effect cannot be addressed by using an ethnographic approach (as ethnography setsout to develop understandings of cultural practices) and thus, this would be incongruent. Joanna Briggs Institute 2017Critical Appraisal Checklist 4for Qualitative Research

6.Locating the researcher culturally or theoreticallyAre the beliefs and values, and their potential influence on the study declared? For example:The researcher plays a substantial role in the qualitative research process and it is important,in appraising evidence that is generated in this way, to know the researcher’s cultural andtheoretical orientation. A high quality report will include a statement that clarifies this.7.Influence of the researcher on the research, and vice-versa, is addressedIs the potential for the researcher to influence the study and for the potential of the researchprocess itself to influence the researcher and her/his interpretations acknowledged andaddressed? For example:Is the relationship between the researcher and the study participants addressed? Does theresearcher critically examine her/his own role and potential influence during data collection? Isit reported how the researcher responded to events that arose during the study?8.Representation of participants and their voicesGenerally, reports should provide illustrations from the data to show the basis of theirconclusions and to ensure that participants are represented in the report.9.Ethical approval by an appropriate bodyA statement on the ethical approval process followed should be in the report.10. Relationship of conclusions to analysis, or interpretation of the dataThis criterion concerns the relationship between the findings reported and the views or wordsof study participants. In appraising a paper, appraisers seek to satisfy themselves that theconclusions drawn by the research are based on the data collected; data being the textgenerated through observation, interviews or other processes. Joanna Briggs Institute 2017Critical Appraisal Checklist 6for Qualitative Research

JBI Critical Appraisal Checklist for Qualitative Research Reviewer Date Author Year Record Number Yes No Unclear Not applicable 1. Is there congruity between the stated philosophical perspective and the research methodology? .