Interreg Europe Action planAn action plan is a document that provides detailed information on how the lessons learned from cooperation willbe implemented to improve a given policy instrument tackled within that region. The minimum information thatmust be provided about each activity is an explanation of the relationship between the activity and the project,the nature of the activities undertaken, the schedule, stakeholders involved, costs and sources of funding. Ifseveral partners are working on the same policy instrument, only one action plan is required. The plan shouldalso contain actions if they were initiated in the first stage of the project.Action plan for the North-West Bulgarian regionPart I – General informationProject: PreservatiOn and promotion of cUltural and natural heRitage through GreenWAYs (OUR WAY,PGI05077) OUR WAYPartner organisation: Chamber of Commerce and Industry VratsaCountry: BULGARIANUTS2 region: SeverozapadenContact person: Iliana Philipova/Svetlana BorisovaEmail address: [email protected] number: 359 878 312 133/ 359 878 598 219Part II – Policy contextThe Action Plan aims to impact: Investment for Growth and Jobs programme European Territorial Cooperation programmeXOther regional development policy instrumentName of the policy instrument concerned by the Action Plan:-Operational programme “Regions in Growth ”2014-2020Integrated Territorial Development strategy – North-west region 2021-2027

-Management plan of “Vrachanski Balkan” Natural ParkThe Level 2 Integrated Territorial Development strategy for the Northwest Area is a strategicplanning document setting out the overall political, spatial, economic and thematic framework for thedevelopment of the region in the years of the new programming period 2021-2027. The RegionalSpatial Development Scheme of the Northwest Region of Level 2 for the period 2021-2027 wasdeveloped in accordance with the National Spatial Development Concept for the period 2013-2025(Update 2019) and takes into account the forecasts of the sectoral strategies at the regional level ineconomic development, health, education, science, social services, transport, water, energy, broadband,tourism and the environment.The Level 2 Integrated Territorial Development strategy of the Northwest Area puts economic,social and territorial cohesion at the heart of the set strategic priorities of the Integrated TerritorialDevelopment Strategy of the Northwest Region:PRIORITY 1: ACCELERATING THE GROWTH OF REGIONAL ECONOMYThe important point here is that, in addition to catching up with specific targeted support from nationaland regional policy, the NRF should mobilize and incorporate its specific potential and growth factorsinto that growth and improve their quality. This priority should be achieved by attracting investment,which is a major factor in the development, restructuring and growth of the economy. On the otherhand, emphasis should be placed on developing and improving the competitiveness of the regionaleconomy through innovation, digitization, economic change and high value-added industries throughtargeted investment. Resource utilization in an efficient and sustainable way is another opportunity forthe development of the region, stimulation of regional economic growth and employment.PRIORITY 2: SUSTAINING AND DEVELOPING HUMAN CAPITALThe National Program for Bulgaria 2030 emphasizes the importance of education as a key aspect ofeconomic potential and a decisive factor for the development of the information society. In order toincrease the attractiveness for living in the North-West region, the implementation of targetedmeasures for the development of the following social systems is planned: health, social services,cultural and sports (including tourism, museums, community centers, etc.). The measures will coverboth the continuation or introduction of new activities for social development and support,improvement of health care, development of sport and cultural sphere, which must be secured on siteand on a resource basis.PRIORITY 3: TERRITORIAL CONNECTION, SUSTAINABLE DEVELOPMENT ANDREDUCING INEQUALITIESThe isolation of the Northwestern region in the transport and digital fields in the country defines thispriority as very important in the efforts to support its economic growth and social development.Investments to improve existing rail, road and inland waterway infrastructure will improve conditionsfor business and commerce, while also contributing to a higher level of safety in the country'stransportation system.Despite the overall estimates for the socio-economic development of the area, in tourism terms, it is stilla little-known "pearl". Nature and history have cancer here, but man has done very little to promote allthis is a single territorial product.Protected areas are created both for the protection of biological diversity, natural resources andrelated cultural values, as well as to provide conditions for recreation and tourism. In this sense, they area tool for regional and local development. The world practice imposes the Management Plan (MP) as adocument that is developed in order to regulate the actions for nature protection and sustainable use of its2

resources for a certain period of time, and forms a long-term vision for the development of the protectedarea. The main normative acts regulating the Management Plans of the Protected Areas in Bulgaria arethe Protected Areas Act (PAA) and the Ordinance for the development of protected areas. Themanagement plans of the protected areas have an attached structure, which pays attention to tourism aspart of the cultural and socio-economic characteristics of the protected area. The structure is mandatoryand contains: Summary; Introduction; Part 1: Description and assessment of the protected area; Part 2:Long-term goals and constraints; Part 3: Norms, regimes, conditions and recommendations for carryingout the activities; Part 4: Operational tasks and prescriptions for protection and use; Part 5: Review of theimplementation of goals and objectives;The management plan of Vrachanski Balkan Nature Park was developed in 2009 and adopted byDecision 750 of 14.10.2011 of the Council of Ministers. According to the legislation, it must beupdated in 2021.Part III – Details of the actions envisagedACTION 1Preparation of a Terms of Reference for revision the Management plan of the Vrachans kiBalkan Nature Park1. The background (please describe the lessons learnt from the project that constitute the basis forthe development of the present Action Plan)During the implementation of the project OUR WAY, representatives of the Directorate ofVrachanski Balkan Nature Park actively participated in the organized meetings and exchange ofexperience with the partners. On the territory of the park there are over 15 eco trails andthematic routes, which are managed by the administration. After an analysis conducted by thePark Directorate, Vratsa CCI and Vratsa District Administration, the Botev Pat route wasidentified as suitable for its development as a green road. This is a historical route that passesthrough the territory of Vratsa District (including 4 municipalities, the territory of VrachanskiBalkan Nature Park and Natura 2000 areas). Its total length is 120 km, and most of it passesthrough specially built non-motorized alleys and paths. It is suitable for walking as well as forbicycles and horse riding. Once a year a march is organized along the route in honour of theBulgarian national hero Hristo Botev. During the rest of the year, the route is rarely visited bytourists, mostly due to lack of information materials, maps and guides. Also, the route is knownmainly as a historical site, not as a tourist attraction and opportunity for sports. In this regard,the partners agreed on the need to develop promotional and information materials for the routeto advertise it as an affordable tourist destination throughout the year. This promotion willstimulate the local population and businesses to offer various services such as accommodation,guidance, camping places, dining places and more.As the route passes through the territory of a large number of settlements and protected areas,the joint work of the Municipal and state administrations will be necessary for its developmentand promotion.3

1. The subject of the plan;2. Structure of the plan with description of the expected content of the points included in it inaccordance with the appendix;3. The necessary appendices to the plan - maps, schemes, lists, etc.;4. Stages, phases and terms for development;5. Other conditions or requirements to the contractors.Part 2 will include a point for the development of a concept for improvement and promotion ofthe part of the route "Botev Road", which passes through the park. The selected subcontractorwill have to develop in detail the concept, which should include the construction of small-sca leinfrastructure and promotional activities.Тhe output of this action is approved technical document that permit to contract the revision ofthe Management Plan of the Vrachanski Balkan Nature Park, according to the Bulgar ia nlegislation.3. Players involved (please indicate the organisations in the region who are involved in thedevelopment and implementation of the action and explain their role) Vrachanski Balkan Nature Park Administration- undertake the necessary activities for thepreparation of the Terms of Reference for the update of the MP; CCI Vratsa - assignment and consultations Subcontractor - the respective legal entity that will prepare the assignment4. TimeframeSelection of a subcontractor and the development of the Terms of Reference will take about4 months. The procedure is expected to start in October 2020. After the elaboration of theassignment it will take about 2 months for its coordination with the Executive Forest Agencyand the MoEW and its final adoption. The monitoring will be done after 6 month period.5. Costs (if relevant)2000 euro6. Funding sources (if relevant):ACTION 2Revision of the Management plan of the Vrachanski Balkan Nature Park1. The background (please describe the lessons learnt from the project that constitute the basisfor the development of the present Action Plan)After the preparation of the Terms of Reference for revision the MP of the Vrachanski BalkanNature Park, it is necessary to take the next administrative steps for the development and adoption5

of the new plan. These steps include: selecting a subcontractor to complete the Assignme nt;Development of a new updated management plan; Conducting public dissuasions; adoption ofthe MP by a decision of the Council of Ministers;The new management plan will contain plans and projects that will correspond to the objectivesof OP "Growing Regions" 2014-2020 and more specifically with priority axis 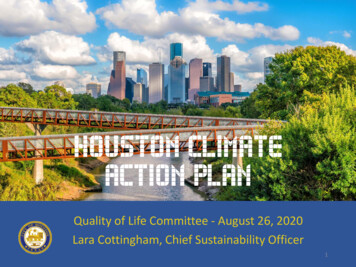 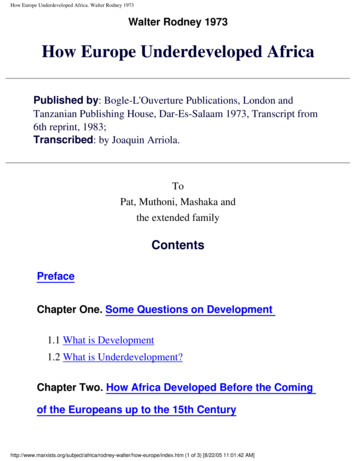 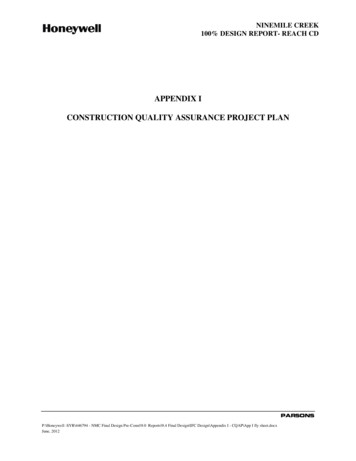 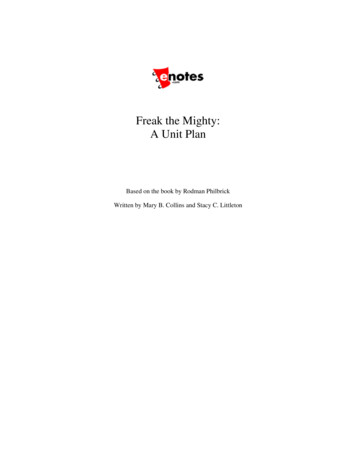 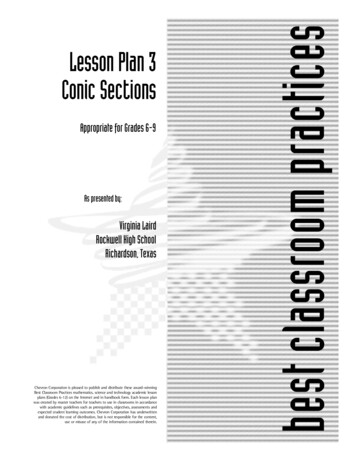 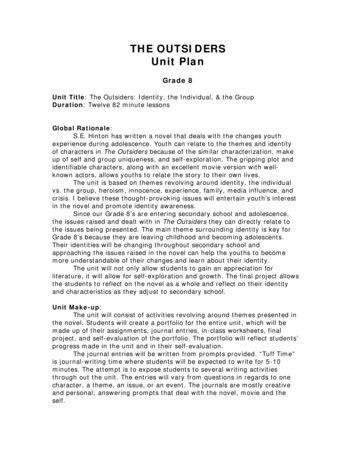 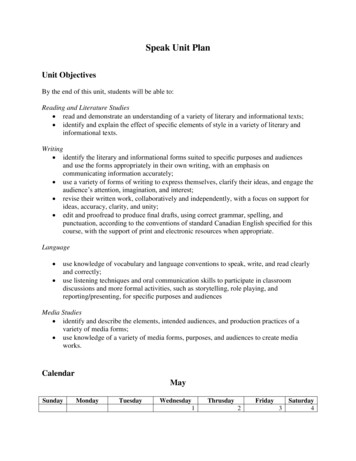 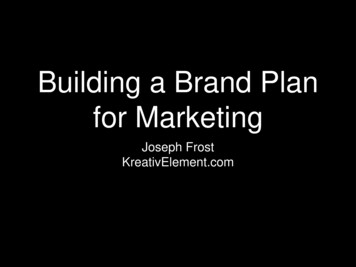 Building a Brand Plan for Marketing 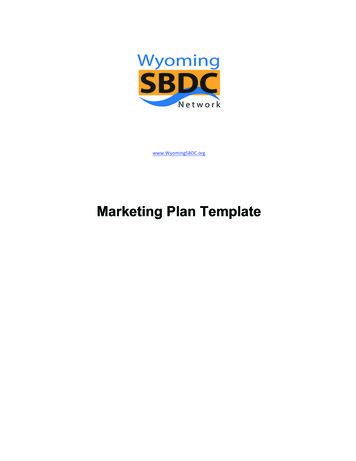 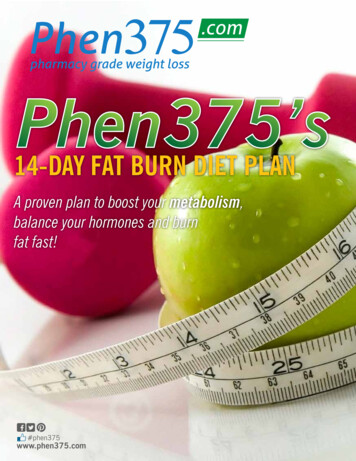