Volkswagen In The United States: An Evolving Growth Story 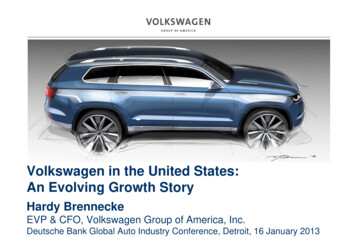 DisclaimerThis presentation contains forward-looking statements and information on the business development ofthe Volkswagen Group. These statements may be spoken or written and can be recognized by termssuch as ŌĆ£expectsŌĆØ, ŌĆ£anticipatesŌĆØ, ŌĆ£intendsŌĆØ, ŌĆ£plansŌĆØ, ŌĆ£believesŌĆØ, ŌĆ£seeksŌĆØ, ŌĆ£estimatesŌĆØ, ŌĆ£willŌĆØ or wordswith similar meaning. These statements are based on assumptions relating to the development of theeconomies of individual countries, and in particular of the automotive industry, which we have made onthe basis of the information available to us and which we consider to be realistic at the time of going topress. The estimates given involve a degree of risk, and the actual developments may differ from thoseforecast.Consequently, any unexpected fall in demand or economic stagnation in our key sales markets, such asin Western Europe (and especially Germany) or in the USA, Brazil or China, will have a correspondingimpact on the development of our business. The same applies in the event of a significant shift incurrent exchange rates relative to the US dollar, sterling, yen, Brazilian real, Chinese renminbi andCzech koruna.If any of these or other risks occur, or if the assumptions underlying any of these statements proveincorrect, the actual results may significantly differ from those expressed or implied by suchstatements.We do not update forward-looking statements retrospectively. Such statements are valid on the date ofpublication and can be superseded.2

Award-winning: The All New PassatCar of the Year 2012Top Safety Pick 2011Best Family Car of 2012 andBest Sedan under 25,000The Family Vehicleof the Year 2012Best of 2012Winner ofHot Six Comparison15

Analysis of the Volkswagen Scandal Possible