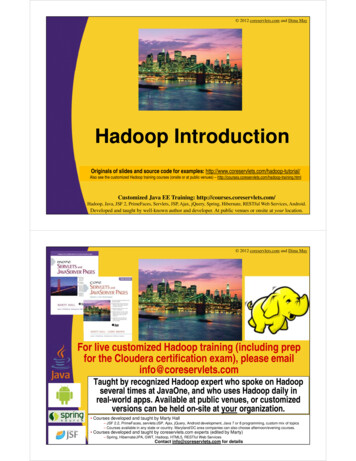 Use Commodity Hardware “Cheap” Commodity Server Hardware– No need for super-computers, use commodity unreliablehardware– Not desktopsNOTBUT12Hadoop System Principles 13Scale-Out rather than Scale-UpBring code to data rather than data to codeDeal with failures – they are commonAbstract complexity of distributed andconcurrent applications

Scale-Out Instead of Scale-Up It is harder and more expensive to scale-up– Add additional resources to an existing node (CPU, RAM)– Moore’s Law can’t keep up with data growth– New units must be purchased if required resources can not beadded– Also known as scale vertically Scale-Out– Add more nodes/machines to an existing distributedapplication– Software Layer is designed for node additions or removal– Hadoop takes this approach - A set of nodes are bondedtogether as a single distributed system– Very easy to scale down as well14Code to Data Traditional data processing architecture– nodes are broken up into separate processing and storagenodes connected by high-capacity link– Many data-intensive applications are not CPU demandingcausing bottlenecks in networkProcessingNodeLoad DataSave ResultsStorageNodeLoad DataProcessingNodeSave ResultsRisk of bottleneckStorageNode

Comparisons to RDBMS (Continued) Structured Relational vs. Semi-Structuredvs. Unstructured– RDBMS works well for structured data - tables thatconform to a predefined schema– Hadoop works best on Semi-structured and Unstructureddata Semi-structured may have a schema that is looselyfollowed Unstructured data has no structure whatsoever and isusually just blocks of text (or for example images) At processing time types for key and values are chosen bythe implementer– Certain types of input data will not easily fit intoRelational Schema such as images, JSON, XML, etc.22Comparison to RDBMS Offline batch vs. online transactions– Hadoop was not designed for real-time or low latencyqueries– Products that do provide low latency queries such asHBase have limited query functionality– Hadoop performs best for offline batch processing onlarge amounts of data– RDBMS is best for online transactions and low-latencyqueries– Hadoop is designed to stream large files and largeamounts of data– RDBMS works best with small records23

Hadoop Eco System To start building an application, you need a filesystem– In Hadoop world that would be Hadoop Distributed File System(HDFS)– In Linux it could be ext3 or ext4 Addition of a data store would provide a nicerinterface to store and manage your data– HBase: A key-value store implemented on top of HDFS– Traditionally one could use RDBMS on top of a local file systemHBaseHadoop Distributed FileSystem (HDFS)26Hadoop Eco System For batch processing, you will need toutilize a framework– In Hadoop’s world that would be MapReduce– MapReduce will ease implementation of distributedapplications that will run on a cluster of commodityhardwareMapReduceHBaseHadoop Distributed FileSystem (HDFS)27

Hadoop Eco System Your organization may have a good numberof SQL experts– Addition of Apache Hive, a data warehouse solution thatprovides a SQL based interface, may bridge the gapOoziePigHiveMapReduceHBaseHadoop Distributed FileSystem (HDFS)30Hadoop Distributions Let’s say you go download Hadoop’s HDFS andMapReduce from http://hadoop.apache.org/ At first it works great but then you decide to startusing HBase– No problem, just download HBase fromhttp://hadoop.apache.org/ and point it to your existing HDFSinstallation– But you find that HBase can only work with a previous versionof HDFS, so you go downgrade HDFS and everything still worksgreat Later on you decide to add Pig– Unfortunately the version of Pig doesn’t work with the version ofHDFS, it wants you to upgrade– But if you upgrade you’ll break HBase.31