Water Enhancement Of CO2 Conversion On Silver In 1-Ethyl-3 . 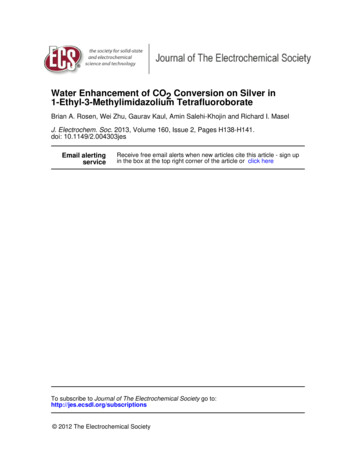 Journal of The Electrochemical Society, 160 (2) H138-H141 (2013)15100Figure 1. Effect of adding H2 O to EMIM BF4on the faradaic efficiency of CO2 reduction toCO and H2 (right) and on the flow cell currentdensity (left) at a cell potential of 2.5 V. In thesplit flow cell electrolyzer, CO2 flowed abovethe cathode gas diffusion layer (GDL). The gasoutlet composition was measured by gas chromatography. The EMIM BF4 -water mixtureswere made to flow adjacent to the cathode and0.1 M H2 SO4 was made to flow adjacent to theanode. See the supplementary material for moredetail.80Current / mAFaradaic Efficiency / %H139COH260402010500020406080Water Mole Fraction / %99020406080Water Mole Fraction / %reagent kit. A KF titration is a coulometric titration used in analyticalchemistry in order to detect trace amounts of water in dry solvents. Thefollowing is a brief description of the titration. The anode compartmentis filled with both an alcohol (ROH) and a base (B) containing bothsulfur dioxide and iodine. The overall reaction (Equations 3 and 4)is the oxidation of sulfur dioxide by iodine. One mole of iodine isconsumed for each mole of water present. This can be converted backto current because there are 2 moles of electrons for every mole ofwater present.B · I2 B · SO2 B H2 O 2BH I BSO3BSO3 ROH BH ROSO 3[3][4]CO Coverage/surface area measurements.— The carbon monoxide coverage on platinum was determined by integrating the areaunder the carbon monoxide stripping peak. The baseline for the carbon monoxide stripping peak was set by the profile of the second scanwhere the peak was no longer present due to the absence of carbonmonoxide on the surface. Carbon monoxide stripping can help determine the coverage of carbon monoxide on platinum black using theconversion constant of 420 μC/cm2 .8Cyclic voltammetry (CV) monitoring carbon dioxide reduction.—In order to monitor the reduction of carbon dioxide dissolved in theelectrolyte solution, cyclic voltammograms were taken both beforeand after the addition of carbon dioxide to the electrolyte solution. Inorder to establish a control, the electrolyte was sparged (150 sccm)with UHP argon for 2 hours. During the control measurement, the ionicliquid was under an argon atmosphere (ca. 1 atm). Cyclic voltammetry measurements were taken at a scan rate of 10 mV/s in a steppedsweep mode with a 2 Hz low pass filter and ohmic loss compensation. The voltammetry experiments for the carbon dioxide saturated2045mol% H2O (pH 3.7)Current / mAexperiments followed the same specifications as the blank, except theelectrolyte was saturated with CO2 , and the head atmosphere whichwas also CO2 rather than UHP argon.ResultsFigure 1 shows the faradaic efficiency of CO and H2 from the gasexit stream of the flow cell measured using a flow cell CO2 electrolyzer.The cell potential was held at 2.5 V for all of the data points in thisfigure.We find that in nearly dry ionic liquid electrolytes, the faradaicefficiency is low, because of leakage currents and other current lossesin the cell. We have found evidence of corrosion on some of ourflow cell components, and while this effect is small, its contributionto the calculation of faradaic efficiency was larger when the overall current was also small. The faradaic efficiency to CO increasedwhen water was added to the dry EMIM BF4 electrolyte reachingnearly 100% at 89.5 mol% water. The 89.5% water mixture contains49.7 moles/liter of water. At higher water concentrations, evolutionbegan; consequently the faradaic efficiency of CO dropped. Figure 2shows the steady state performance of the flow cell. The steady statecurrent was measured at the two proton concentrations showing thehighest performance from Figure 1. Table I shows the pH of variousEMIM BF4 -H2 O mixtures, as well as an EMIM BF4 -0.1 M H2 SO4mixture. Notice how the hydrolysis of the BF4 anion causes the pH ofEMIM BF4 -H2 O mixtures to form a global minimum. From Figure 1,we see that an EMIM BF4 -water mixture with a pH of 3.2 showed thehighest performance. We made an electrolyte mixture of 10.3 mol%0.1 M H2 SO4 in EMIM BF4 , which is also at pH 3.2. Figure 2 showsthat the steady state currents for both the 89.5 mol% water mixtureand the 10.3 mol% 0.1 M H2 SO4 mixture overlapped. This demonstrates the dependence on proton availability of the CO2 reductionrate.Figure 3 shows the cyclic voltammetry for the reduction of carbondioxide on silver nanoparticles in EMIM BF4 . In dry EMIM BF4 ,CO2 reduction began at 0.7 V vs. SHE. As water was added, wemeasured an increase in the CO2 reduction current relative to the dryionic liquid, consistent with Figures 1 and 2. We also observe the89mol% H2O (pH 3.2)1510.5mol% 0.1M H2SO4 (pH 3.2)Table I. The pH of EMIM BF4 mixed with various amounts ofwater and 0.1 M H2 SO4 .10509904008001200Time / sec1600Figure 2. Steady state performance of flow cell with silver cathode at 0.7vs. SHE. Note that the steady state current for CO2 reduction depends on theproton concentration.Solution CompositionpHEMIM BF4 0 mol% H2 O8 mol% H2 O25.0 mol% H2 O48.7 mol% H2 O89.5 mol% H2 O96.4 mol% H2 O98.0 mol% H2 O10.3 mol% 0.1 M H2 SO45.544.994.873.763.204.927.613.20

H140Journal of The Electrochemical Society, 160 (2) H138-H141 (2013)Current / mA0-5CO2 red'nArgon 100mol% EMIM BF4CO2 100mol% EMIM BF4-10CO2 92.0mol% EMIM BF4 8.0% H2OCO2 51.3mol% EMIM BF4 48.7% H2OCO2 10.5mol% EMIM BF4 89.5% H2OCO2 1.3mol% EMIM BF4 98.7% H2O-15-1.0-0.50.0Potential vs. RHE0.5Figure 3. Effect of adding H2 O to EMIM BF4 on carbon dioxide reductionon a silver nanoparticle cathode (ν 50 mV/s).onset potential of CO2 reduction moving to more positive potentials.The onset potential for CO2 reduction increased from 0.6 V to about 0.45 V vs. SHE, as the pH dropped from 5.54 to 3.2, consistent withthe Nernst equation. The earliest onset potential, as well as the largestreduction current, was observed at a pH of 3.2, 89.5 mol% water and10.5 mol% EMIM BF4. In addition to pH effects mentioned above,the mass transport resistance to the electrode is considerably loweredas water is added due to the lower viscosity.The effect of water enhanced CO2 reduction is also seen on metalswith very low hydrogen overpotentials such as platinum. This effect isparticularly interesting because it would be expected that metals likeplatinum would produce only hydrogen upon the addition of protons.Figure 4 shows CO striping from a platinum surface after it was heldat 0.7 V vs. SHE for 5 min. Because CO irreversibly absorbs onplatinum at room temperature, the area under the striping peak is ameasure of how much CO was produced during the electrolysis step.The striping peaks can be found in Figure S3 in the supplementalsection. We observe a similar trend on platinum and silver in thatthere is a peak in CO production at an intermediate mole fraction ofwater. This critical mole fraction, where the CO production reachesa maximum, occurs at a smaller water concentration on platinumcompared to silver. This is because the overpotential of hydrogen onplatinum is lower compared to silver. The result is that the surfaceis covered by H2 at a lower water fraction on platinum compared tosilver.DiscussionIt is useful to compare the results here to those from the previous literature. Tomita et al.9 examined the effects of water additionson CO2 electrolysis in acetonitrile-water mixtures, and found thatCO Stripping Peak Area / mC20161284they could observe significant hydrogen formation when as little as0.01 moles/liter of water is added to a dry acetonitrile solution. Hydrogen formation dominates at water concentrations of 1 moles/literor more. Here we find little hydrogen formation when the water concentration is about 25 moles/liter and only start to observe significanthydrogen formation at water concentrations above 30 moles/liter. Interestingly, we produce about the same amount of hydrogen at a waterconcentration of 37 moles/liter as Tomita et al. report at a water concentration of 0.03 moles/liter. Clearly, the EMIM-BF4 can inhibithydrogen formation.We can speculate how this occurs. Previous workers10–12 havefound that amines can inhibit hydrogen formation, although the effects were smaller than those observed here. While the mechanism isnot clear, we previously showed13 that on platinum, EMIM covers thesurface. We speculate that the EMIM layer blocks hydrogen adsorption. For example Figure S6 shows that 1 mol% EMIM BF4 in 0.1 MH2 SO4 completely inhibited the UPD hydrogen peaks on a platinumcathode. Clearly, there is a significant effect.Our other key observation is that water lowers the overpotentialfor CO2 conversion. This is also a surprising result. Of course, wateradditions also lower the pH of the EMIM-BF4 solution. This is dueto the hydrolysis of BF4 to form HF and anions such as [BF3 OH] ,[BF2 (OH2 )] , [BF(OH)3 ] , and [B(OH4 )] .14,15 At room temperature,Wamser et al.16 found that approximately 13% of the BF4 anions inHBF4 hydrolyze.The overall reaction on the cathode isCO2 2H 2e CO H2 O[5]Therefore, we propose that the decrease in the pH of the system aswater is added to the mixture leads to a greater proton availability,which according to the Marcus equation should lower the barrier tothe reaction and enhance the rate.This result shows that the addition of water to EMIM BF4 can infact accelerate the desired CO2 reaction, while the EMIM cation couldinhibit the H2 evolution expected upon water addition, even at highwater concentrations.AcknowledgmentsThis work was supported by the U.S. Air Force under contractFA8650-12-M-2249 and by Dioxide Materials. BAR was supportedin part by an award from the Department of Energy (DOE) Officeof Science Graduate Fellowship Program (DOE SCGF). The DOESCGF Program was made possible in part by the American Recovery and Reinvestment Act of 2009. The DOE SCGF programis administered by the Oak Ridge Institute for Science and Education for the DOE. ORISE is managed by Oak Ridge Associated Universities (ORAU) under DOE contract number DE-AC0506OR23100. The following patents applications are related to thework here. 12/830338 Masel “Novel Catalyst Mixtures”, 13/174365Masel “Novel Catalyst Mixtures”, PCT/US11/42809 Masel “NovelCatalyst Mixtures”, PCT/US/11/30098 Masel and Rosen “Novel Catalyst Mixtures”, 13/530,058 Masel and Rosen, “Inexpensive CarbonDioxide Sensor”, 13/445887 Masel and Salehi-Khojin Electrocatalysts For Carbon Dioxide Conversion All opinions and recommendations expressed in this paper are the authors’ and do not necessarilyreflect the policies and views of U.S. Air Force, DOE, ORAU, orORISE.0020406080Aqueous Mole Fraction / %Figure 4. Effect of adding H2 O to the CO striping peak area after the electrodewas held at a reducing potential of 0.7 V vs. SHE for 5 min.References1. C. Federsel, R. Jackstell, and M. Beller, Angewandte Chemie International Edition,49, 6254 (2010).2. G. A. Olah, A. Goeppert, and G. K. S. Prakash, J. Org. Chem, 74, 487 (2009).3. Y. Hori, Modern Aspects of Electrochemistry, 42, 89 (2008).

Brian A. Rosen, Wei Zhu, Gaurav Kaul, Amin Salehi-Khojin and Richard I. Masel 1-Ethyl-3-Methylimidazolium Tetrafluoroborate Water Enhancement of CO2 Conversion on Silver in service Email alerting in the box at the top right corner of the article or click here Receive free email alerts when new articles cite this article - sign up