The Partnership for Public Service is a nonpartisan, nonprofit organization that works torevitalize the federal government by inspiring a new generation to serve and by transformingthe way government works. The Partnership teams up with federal agencies and otherstakeholders to make our government more effective and efficient.We pursue this goal by: Providing assistance to federal agencies to improve their management andoperations, and to strengthen their leadership capacity Conducting outreach to college campuses and job seekers to promote public service Identifying and celebrating government’s successes so they can be replicated acrossgovernment Advocating for needed legislative and regulatory reforms to strengthen the civil service Generating research on, and effective responses to, the workforce challenges facingour federal government Enhancing public understanding of the valuable work civil servants performThe Boston Consulting Group is a global management consulting firm and one of theworld’s leading advisers on business strategy and change management. BCG was foundedin 1963 and has more than 15,000 staff based in 48 countries and 85 offices around theworld. BCG’s U.S. Federal Practice was founded in 2009 and helps clients address theirmost critical challenges to enable more efficient, effective and affordable government.

Copyright 2018 by the Partnership for Public ServicePolicies made available under a Creative Commons Attribution-NonCommercial License.To view a copy of the license, visit https://creativecommons.org/licenses/by-nc/4.0/

In the 1972 dramatic filmThe Candidate, a dazedU.S. Senator-electBill McKay learns he haswon a hard-foughtelection. Turning tohis campaign manager,he asks, “So whatdo we do now?”This classic fictional scene highlights the real-life difficultyof preparing to govern in the midst of campaigning, andthe void that is created if planning does not take place.While planning may be an afterthought in the movies, theconsequences in reality are serious and sobering. Preparingto take over the presidency of the United States of Americais highly complex and extremely important. Done well, itwill set up a new administration for success; done poorly, itwill make it difficult for a new administration to recover.

IntroductionIntroductionThe purpose of this guide is to share lessons learned from past presidential transitions and to suggest best practices, as well as key choices and decision-pointsinvolved in planning for a smooth and successful transfer of power. It is essentialto begin transition planning well before Election Day, which requires creating anorganization, setting goals and doing the work necessary to achieve those priorities. The primary goals of a presidential transition include: Staffing the White House and the Executive Office of the President, developing a functional decision-making process and preparing to assume governingresponsibility Making more than 4,000 presidential appointments, over 1,100 of which require Senate confirmation Getting up to speed on more than 100 federal agencies and organizing andtraining leadership teams for each Building a policy platform for the new administration based on campaignpromises, and planning executive actions, a management agenda, a budgetproposal and potential legislation Preparing a 100- to 200-day plan for executing the policies laid out during thecampaign to help the new administration get off to a quick start Developing a strategy for communicating with the American people, Congress,the media, political appointees, the federal workforce and other stakeholders3

Presidential Transition GuideNew presidents not only have to make critical leadership appointmentsacross government and pursue a robust policy agenda, they also have to be fullyprepared to handle a major crisis within their first few months in office. PresidentDonald Trump was confronted with an emergency response to three major hurricanes in 2017, as well as escalating tensions over the North Korean nuclear threat.President Barack Obama had to deal with the worst financial crisis since the GreatDepression upon taking office in 2009, while the Sept. 11, 2001 terrorist attacksoccurred just eight months after President George W. Bush’s inauguration. Candidates cannot wait until after the election to begin thinking about how they willorganize and prepare to deal with such emergencies or the demanding day-to-dayrequirements of governing. This work must begin in the midst of the presidentialcampaign so the new administration will be ready to govern—and be prepared forany possibility—on day one.The intended audience for this guide includes presidential candidates andtheir top campaign and transition staff, administrations seeking a second term,outgoing administrations, policymakers invested in the transfer of power, agencyofficials handling transition planning, outside groups that provide advisory support, the media and the public at large.The pages that follow cover the major activities and phases of a presidential transition, and explain how successful transitions should operate. Thisguide is not intended as a complete history of past presidential transitions, butit is a living document that will be updated as we learn more about presidentialtransitions and talk with those who have been involved in the process. Individualsprovided information on the basis of non-attribution, and direct quotes have beenincluded with permission.THE RESEARCH, DISCUSSIONS AND ACTIVITIESTHAT INFORMED THIS GUIDEThe transition work of the Partnership for Public Service over the past decadehas been used to develop this guide and improve the presidential transitionprocess. Our work has included:4 Conferences in 2008, 2012 and 2016 at the Pocantico Conference Centerof the Rockefeller Brothers Fund that brought together representatives offederal agencies, good-government groups and members of the major campaigns to discuss transition planning. The 2016 conference included speakers from the 2008 transition team of President Obama and the 2012 team ofRepublican candidate Mitt Romney, including the chairman of the RomneyReadiness Project. Attendees included officials from the Republican campaigns of Donald Trump, John Kasich and Ted Cruz, and the Democraticcampaigns of Hillary Clinton and Bernie Sanders. The Boston ConsultingGroup helped facilitate the 2012 and 2016 conferences and prepared awealth of materials relating to the 2016 presidential transition. Convening three presidential transition roundtable forums in 2016 withmembers of the Hillary Clinton and Donald Trump transition teams toprovide information and best practices on preparing to govern and to fa-

Introductioncilitate a smooth handover of power from the Obama administration to thesuccessful candidate. Engagement with more than 170 career agency executives from 40 agencies during 2016 and 2017 to help them plan for the presidential transitionand anticipate the needs of the presidential transition teams. Interviews with members of the Trump and Clinton transition teams, theObama administration and agency transition service providers followingthe 2016 presidential election to understand how the transition teams, theWhite House and the service providers were organized, what worked andwhat should take place in the future to improve the process. Development of a series of interactive courses to provide new political appointees with the tools they need to succeed and excel in their roles asgovernment leaders. Discussions with Congress that led to passage of new laws that reducedthe number of political appointees subject to Senate confirmation; provided office space, equipment and support to eligible candidates immediatelyafter their political conventions; and established White House and federalagency councils designed to assist the transition teams of the presidentialcandidates. An in-depth analysis of presidential transition calendars, and how presidents-elect spend their time between the election and the inauguration,developed in cooperation with the Boston Consulting Group. Sponsoring the release event for the Romney transition team’s book, Romney Readiness Project 2012: Retrospective and Lessons Learned, by Michael Leavitt, Chris Liddell, Daniel Kroese and Clark Campbell, detailingthe Romney team’s presidential transition planning goals, milestones andactivities. The Partnership’s 2010 report “Ready to Govern,” which detailed thepreparations made by the presidential campaigns of Sens. Barack Obamaand John McCain and the outgoing Bush administration for the 2008presidential transition. This report recommended ways to improve presidential transitions, including through early preparation, changes to theappointment and personnel processes, and coordination between outgoingand incoming administrations. Interviews with numerous participants from the Obama, Romney, Bushand other transitions. Review of historical documents that were developed as part of past transition operations as well as scholarly studies on the subject of presidentialtransitions and the presidency.5

Presidential Transition GuideABOUT OUR MISSIONThe nonpartisan, nonprofit Partnership for Public Service’s Center forPresidential Transition, supported by the Boston Consulting Group, and thePartnership’s Ready to Govern initiative are designed to ensure the smoothand safe transfer of both power and knowledge during the peaceful transitionfrom one presidential administration to the next. Ensuring that each incomingpresident is ready to lead is a national security imperative and a solemn duty tothe American people.Few presidential transitions have been well documented, and even fewerhave captured key materials, information and advice in a way that will be useful to future transition teams—a surprising and even concerning fact given theenormous amount of planning and preparation that the transition requires. Asthe presidential campaign season heats up, we need to place as much emphasison the ability of candidates to lead our government as we do on their policypositions. The president is essentially the CEO of a complex organization ofabout 2 million civilian federal employees and some 2 million military and reserve forces. The president has a mandate to protect U.S. citizens and create anenvironment where they can prosper. This means presidential candidates mustbegin transition activities early, smartly and at full strength.With the Center for Presidential Transition and our online platform, presidentialtransition.org, the Partnership has created a learning system to assistpresidential candidates and presidential transition teams, administrationsseeking a second term, outgoing administrations, federal agency leaders, government career executives and Congress. The Center provides access to theresources needed to plan, prepare and contribute to a smooth transfer of power.We combine our in-house expertise with material gleaned from a variety ofsources, including prior transition teams, administration officials, governmentagencies, good-government organizations and transition scholars. The resultis a permanent one-stop shop for all things transition that will serve to educate, inform and equip all those who play a role in the presidential transition tomake each one better than the one before.The Center for Presidential Transition is home to the Ready to Govern initiative. Our work includes:ASSISTING PRESIDENTIAL CANDIDATESThe Partnership created a single source for campaigns to obtain comprehensive information regarding transition planning. We have prepared this presidential transition guide, collected historical documents from previous transitions, built an online information platform, provided guidance to transitionteam leaders and facilitated relationships between transition teams, outgoingadministrations and individuals with prior transition experience.HELPING CAREER AGENCY LEADERS MANAGE THE PRESIDENTIAL TRANSITIONFederal departments and agencies face a cascading series of challenges beforeand after a presidential election. We work closely with career leaders in theagencies to help them prepare for a presidential transition. In 2017, we pub6

Introductionlished the “Agency Transition Guide” (available at http://bit.ly/2yzMhXz) detailing how to organize an agency transition that includes best practices andlessons learned. We also convene agency transition leaders from across government to network and share information on transition planning.PREPARING PRESIDENTIAL APPOINTEES TO SUCCEEDThe success of every presidency depends on picking high-quality agency appointees and preparing them to lead in the public sector. Through our Readyto Govern courses, bipartisan faculty from previous admini 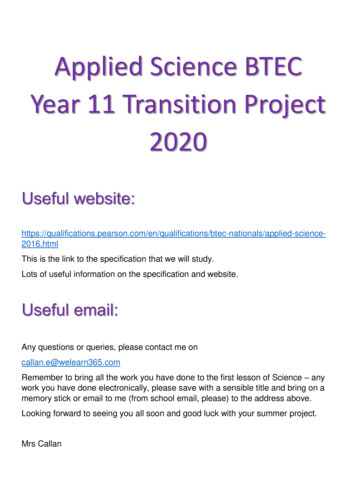 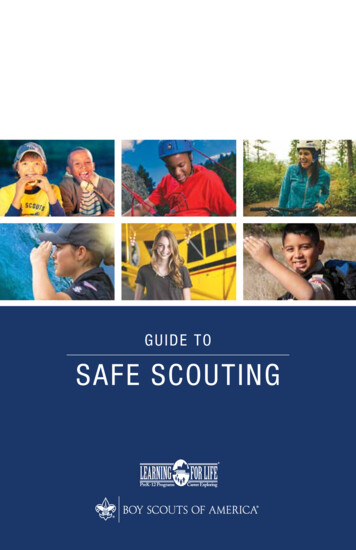 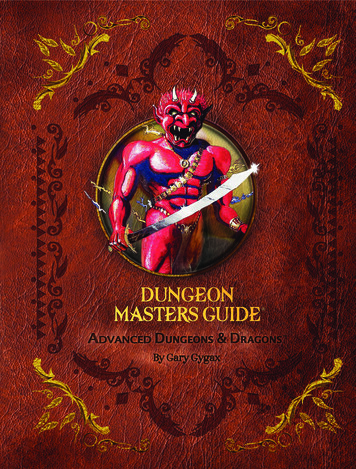 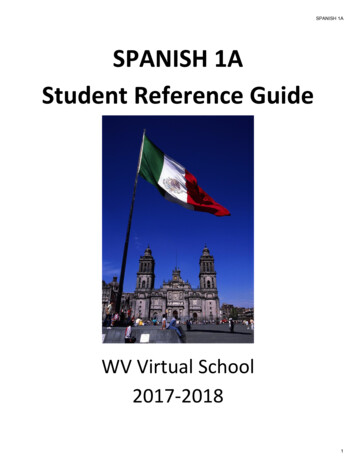 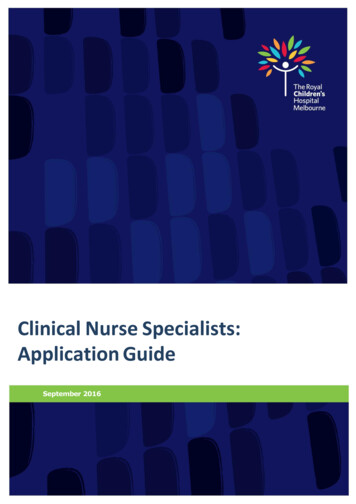 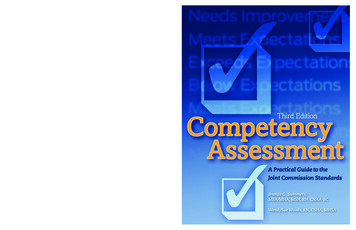 A Practical Guide to the Joint Commission Standards 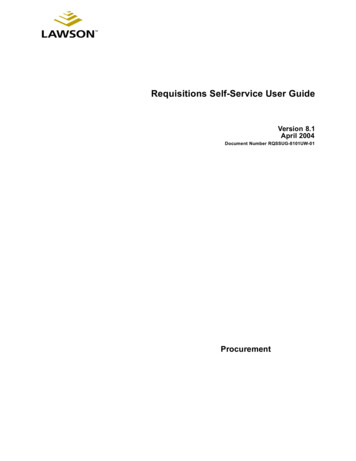 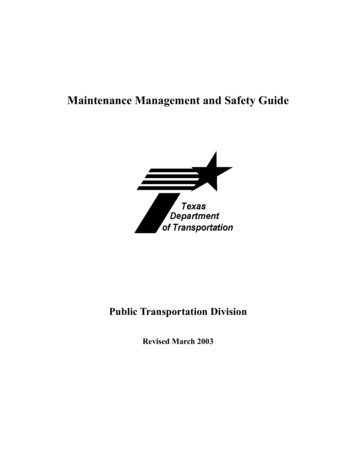 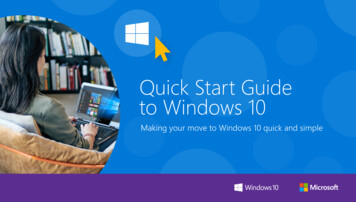