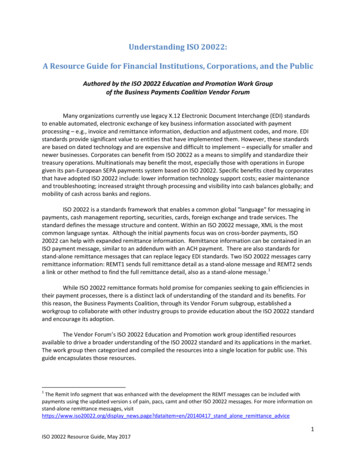 Understanding ISO 20022:A Resource Guide for Financial Institutions, Corporations, and the PublicAuthored by the ISO 20022 Education and Promotion Work Groupof the Business Payments Coalition Vendor ForumMany organizations currently use legacy X.12 Electronic Document Interchange (EDI) standardsto enable automated, electronic exchange of key business information associated with paymentprocessing â€“ e.g., invoice and remittance information, deduction and adjustment codes, and more. EDIstandards provide significant value to entities that have implemented them. However, these standardsare based on dated technology and are expensive and difficult to implement â€“ especially for smaller andnewer businesses. Corporates can benefit from ISO 20022 as a means to simplify and standardize theirtreasury operations. Multinationals may benefit the most, especially those with operations in Europegiven its pan-European SEPA payments system based on ISO 20022. Specific benefits cited by corporatesthat have adopted ISO 20022 include: lower information technology support costs; easier maintenanceand troubleshooting; increased straight through processing and visibility into cash balances globally; andmobility of cash across banks and regions.ISO 20022 is a standards framework that enables a common global "language" for messaging inpayments, cash management reporting, securities, cards, foreign exchange and trade services. Thestandard defines the message structure and content. Within an ISO 20022 message, XML is the mostcommon language syntax. Although the initial payments focus was on cross-border payments, ISO20022 can help with expanded remittance information. Remittance information can be contained in anISO payment message, similar to an addendum with an ACH payment. There are also standards forstand-alone remittance messages that can replace legacy EDI standards. Two ISO 20022 messages carryremittance information: REMT1 sends full remittance detail as a stand-alone message and REMT2 sendsa link or other method to find the full remittance detail, also as a stand-alone message. 1While ISO 20022 remittance formats hold promise for companies seeking to gain efficiencies intheir payment processes, there is a distinct lack of understanding of the standard and its benefits. Forthis reason, the Business Payments Coalition, through its Vendor Forum subgroup, established aworkgroup to collaborate with other industry groups to provide education about the ISO 20022 standardand encourage its adoption.The Vendor Forumâ€™s ISO 20022 Education and Promotion work group identified resourcesavailable to drive a broader understanding of the ISO 20022 standard and its applications in the market.The work group then categorized and compiled the resources into a single location for public use. Thisguide encapsulates those resources.1The Remit Info segment that was enhanced with the development the REMT messages can be included withpayments using the updated version s of pain, pacs, camt and other ISO 20022 messages. For more information onstand-alone remittance messages, visithttps://www.iso20022.org/display news.page?dataitem en/20140417 stand alone remittance adviceISO 20022 Resource Guide, May 20171

This guide is intended to be a living document that can be updated as new resources becomeavailable. The most recent update is as of May 2017. If you have suggestions for additions to this guide,please direct them to [email protected] May 2017 a companion document to this guide was published, a white paper entitled U.S.Adoption of ISO 20022. The white paper, available on the Business Payments Coalition website,summarizes findings from a corporate survey and shares secondary research. It demonstrates that ISO20022 is being adopted in the U.S. for corporate to bank operations, explains why, and providessubstantiating evidence. It summarizes corporate case studies and highlights best practices and lessonslearned, along with identifying key drivers for and benefits from adopting ISO 20022.The term â€śMarket Infrastructureâ€ť (MI), used in various resource references, refers to amultilateral system among participating financial institutions (including the systemoperator) used to record, clear, or settle payments, securities, derivatives, or otherfinancial transactions. Financial Market Infrastructures exist in many different markets.Note: These materials have been created by the Business Payments Coalition and are intended to beused as resources. Views expressed here are not necessarily those of, and should not be attributed to,any particular Business Payments Coalition participant or organization. They are not intended toprovide business or legal advice, nor are they intended to promote or advocate a specific action,payment strategy or product. Readers should consult with their own business and legal advisors.ISO 20022 Resource Guide, May 20172

GENERAL ISO 20022 RESOURCES:These resources provide an overview of the ISO 20022 standard, its history, challenges andopportunities. Any organization seeking to more thoroughly understand IS0 20022 and its applicabilityto their respective environment should benefit from review of the content provided.1. ISO 20022: The Official Site for the ISO 20022 Standardhttps://www.iso20022.org/The ISO 20022 website contains various resources (technical and business) related to allfinancial domains covered by ISO 20022, including payments.2. ISO 20022 - Supporting Documentation, â€ś101 bookletâ€ť, Adoption Reporting, Presentations andNewsletter:https://www.iso20022.org/about iso20022.pageThis area of the ISO 20022 site contains several tabs with general resources about ISO 20022,including: ISO 20022 for Dummies: A primer on ISO 20022 (this resource is an online book, not apdf document), overview presentations on ISO 20022 organization and process, newsletters andFAQs.There is information on Adoption Reporting, a catalog of communities (primarily marketinfrastructures) that have implemented or have plans to implement ISO 20022. The newsletterincludes business and technical articles from schema submitters, implementers and others onvarious payment system implementations of ISO 20022.3. ISO 20022 Assessment Report: Extract and Discussion Document, eportIn 2013, a stakeholder group consisting of The Federal Reserve Bank of New York, The ClearingHouse Payments Company LLC, NACHA â€“ The Electronic Payments Association, and theAccredited Standards Committee X9, Inc. engaged KPMG LLP to objectively evaluate thebusiness case for or against adoption of ISO 20022 payment messages by U.S.-based financialinstitutions, payment clearing and settlement infrastructures, and corporate customers. Thisdocument outlined KPMGâ€™s findings. No-cost registration is required to access this resource.4. Research Results Summary: ISO 20022 Business Case Assessment, /uploads/iso 20022 business case.pdfThis report includes a summary with updates of a study jointly commissioned by the FederalReserve, The Clearing House, NACHA, and X9 assessing the business case for use of ISO 20022 inthe U.S. payment infrastructures. Information focuses on using ISO 20022 to improve theefficiency of cross-border payments, with some focus on domestic payments.5. Payments and ISO 20022 in the US Market, ents-and-iso-20022-in-the-us-marketISO 20022 Resource Guide, May 20175

This is a Power Point presentation that gives an update on ISO 20022 initiatives in the US as ofMay 2016.6. SWIFT rdsThis is a link to the main SWIFT MyStandards site. MyStandards is a collaborative Webapplication used to manage standards definitions and industry usage more efficiently, drivingcommunity-wide harmonization and s link provides registered users downloadable pdf documentation related to all of the current(and previous) versions of all ISO 20022 message suites. There is no cost to register.7. Remittance Standards Inventory - A Publication of the Business Payments Coalition (X9 TR-442013), R-44-2013-Final.pdfThis technical report published by ASC X9 is an inventory of payment and remittanceinformation standards and includes information about ISO 20022 prepared by ASC X9 for theBusiness Payments Coalition.8. Understanding the ISO 20022 Stand-alone Remittance Messages, derstanding the ISO 20022 StandAlone Remittance Messages-1.pdfThis white paper, available from IFX Forum, Inc. provides in-depth background about the ISO20022 Stand-alone Remittance messages; why they were developed, how they were developed,the use cases they address, and the case for adoption of the messages by industry and financialservice providers. Many examples are included in order to familiarize the reader with thestructure and capabilities of the messages. IFX Forum developed the ISO 20022 remittancemessages and the enhanced versions of the Remit Info segments that carry the same datadirectly in ISO 20022 payment messages.9. ISO 20022 in Plain English, /uploads/0217-bpc-intro-iso20022.pdfThis is the presentation from the February 2017 Business Payments Coalition webinar â€śISO20022 in Plain Englishâ€ť. It provides basics about the ISO 20022 standard and paymentmessages, along with an overview of governance and adoption.ISO 20022 Resource Guide, May 20176

RESOURCES FOR USING ISO 20022 IN THE ACH NETWORK:The resources below are targeted to those seeking to understand the applicability and utilizationpotential of ISO 20022 within the ACH Network. Financial Institutions in particular should find theseresources to be valuable. Corporations may benefit from understanding how those organizationssupporting their ACH payment processes could capitalize on leveraging the standard.1. NACHA ISO 20022 Resource Center:https://www.nacha.org/ISOresourcesThis is the main page for NACHA resources and information on ISO 20022.2. Introduction to ISO 20022 for U.S. Financial Institutions, so-20022-US-financial-institutionsThe focus of this report is to shed light on the ISO 20022 practices and opportunities in the U.S.and global payments landscape, and to dispel myths surrounding what use of this standard canand cannot support. No-cost registration is required to obtain this document.3. ACH-ISO 20022 Mapping Guide & Tool, €™s ISO 20022 Mapping Guide & Tool enables financial institutions to support businessesthat leverage the ISO 20022 standard by providing standardized guidance to facilitatetranslation of ISO 20022 pain.001 credit transfer and pain.008 direct debit payment messagesinto ACH transactions.4. XML-ACH Remittance Information (link has accompanying fact ttance-xml-achNACHAâ€™s XML-ACH Remittance Opt-in (XML-ACH) Program allows participants to safely andsecurely transmit ISO 20022 approved payment remittance (remt.01/02) information for B2Btransactions in a standardized XML format via the ACH Network.5. NACHA ISO 20022 Strategy for the ACH Network, NACHA%20ISO%2020022%20Strategy.pdfThis resource provides an overview of NACHAâ€™s support for integration of ISO 20022 in the U.S.ACH Network and considerations for conversion of ACH formats to ISO 20022.6. The Federal Reserve Systemâ€™s Resource Center for Adoption of ISO 20022 for Wire Transfersand ACH ts-efficiency/iso-20022/This webpage includes documentation addressing U.S. wire payment systemsâ€™ potential use ofISO 20022 for payments and remittance information. It contains links to additional documentsand webinar recordings.ISO 20022 Resource Guide, May 20177

7. ISO 20022 â€“ Messages Specifications (schema) and Official Documentation:https://www.iso20022.org/payments messages.pageThis site includes a repository of all base payment message technical specifications (schema). Itincludes pacs (interbank and MI) as well as pain (corporate to bank) schema. The site alsocontains information about mandatory documentation â€“ Schema, Message Definition (technicaldescription of the schema), as well as sample messages, message usage Guides and variantswhere provided by the submitter.8. Case Study: Merck Optimizes Performance Employing ISO 20022 XML for ACH Payments, -paymentsThe case study, Merck Optimizes Performance Employing ISO 20022 XML for ACH Payments,showcases how a large company leveraged the ISO 20022 standard to reduce costs, streamlineprocesses, and gain efficiencies. Today Merck is leveraging the international messaging standardISO 20022 XML to execute all payment types â€“ from ACH to wires and checks â€“ for commercialtransactions in the U.S. as well as for the rest of the world. However, moving away fromproprietary formats is not the only way the company is deriving benefits. Merck is alsogenerating savings with a combination of payments solutions and processes.ISO 20022 Resource Guide, May 20178

description of the schema), as well as sample messages, message usage guides and variantswhere provided by the submitter.ISO 20022 Resource Guide, May 201710

RESOURCES FOCUSED ON GLOBAL IMPLEMENTATION OF ISO 20022The resources contained in this section are intended for audiences with an interest in the globalimplementation of the ISO 20022 standard, including international best practices and interoperabilityissues.1. ISO 20022 - Implementation Best Practices, mentation-best-practicesThe International Council of Payment Association Chief Executives (ICPACE) asked Lipis Advisorsto investigate the best practices for implementing ISO 20022 in early 2014. This documentdetails lessons learned from communities that have completed adoption or are in the process ofmigrating to ISO 20022. No-cost registration is required to access this resource.2. Implementation-Specific Information on ISO 20022 Related to iso-20022-messagestandards/The above links provide information on ISO 20022 implementation in Canada and Europe.3. Common Global Implementation-Market Practice on-and-scopeThis site outlines the work products of a market practice group working to harmonize use of thecorporate-to-bank payment-related-standards across banks, countries and payment systems toincrease the level of standardization. Resources include: CGI-MP specified schema, FAQs andmission statements (context).4. ISO 20022 Adoption mApp (for iPads in the Apple App store)The ISO 20022 Adoption mApp is a mobile application that provides an easy to use overview of81 initiatives around the globe where ISO 20022 is being adopted as the standard. These 81initiatives have chosen to participate and provided information to be published. The mAppcontent is periodically updated.The same information is available from the ISO 20022 Introduction Maps and the Full DetailsReport (December 2016) using the links at:https://www.iso20022.org/adoption.page5. The Drive to Electronic Remittance Exchange in Business-to-Business Payment nce-b2bpayment-automation.pdfISO 20022 Resource Guide, May 201711

This is a white paper from CGI presenting comparisons in B2B remittance exchange processes inthe U.S. and Europe, spotlighting certain economies, and highlighting recent developments withrespect to extended remittance information and its future implications for stakeholders in thefinancial value chain.ISO 20022 Resource Guide, May 201712

Although the initial payments focus was on cross-border payments, ISO 20022 can help with expanded remittance information. Remittance information can be contained in an ISO payment message, similar to an addendum with an ACH payment. There are also standards for stand-alone remittance messages that can replace legacy EDI standards.