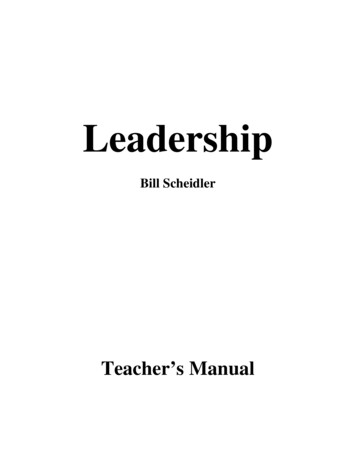 Lesson 1-4Introduction to LeadershipI.What is said by others about leadership?Notable Quotes:A. Leadership is Example“The best example of leadership is leadership by example.” –Jerry McClain“Setting an example is not the main means of influencing others, it is the onlymeans.” –Albert Einstein“The difference between a boss and a leader is that a boss says, ‘Go!’ while aleader says, ‘Let’s go!’” –E. M. Kelly“Nothing so conclusively proves a man’s ability to lead others as what he doesfrom day to day to lead himself.” –Thomas J. Watson“A leader is one who knows the way, goes the way, and shows the way.”–John MaxwellB. Leadership is Character“Managers are people who do things right, while leaders are people who do theright thing.” –Warren Bennis, Ph.D.“The greater a man is in power above others, the more he ought to excel them invirtue. None ought to govern who is not better than the governed.” –Publius SyrusC. Leadership is Influence“Leadership is influence—nothing more, nothing less.” –John C. Maxwell“A leader is one who influences a specific group of people to move in a Godgiven direction.” –J. Robert Clinton“The only test of leadership is that somebody follows.” –Robert K. Greenleaf“Leaders don’t force people to follow; they invite them on a journey.”–Charles S. Lauer“Leadership is the desire and ability to inspire individual achievement, while aleader is just a guy at the top of the heap worried about his own.” –Keith Mullen“Leadership is the art of getting someone else to do something you want donebecause he wants to do it.” –Dwight D. EisenhowerLeadership Bill Scheidler, 2009Teacher’s Manual4

“If your actions inspire others to dream more, learn more, do more and becomemore, you are a leader.” –John Quincy Adams“Leadership is the ability of a single individual through his or her actions tomotivate others to higher levels of achievement.” –F. G. “Buck” RodgersD. Leadership is Serving“The first step to leadership is servanthood.” –John Maxwell.“He who has learned how to obey will know how to command.” –Solon“You cannot be a leader, and ask other people to follow you, unless you knowhow to follow, too.” –Sam Rayburn“Be gentle and you can be bold; be frugal and you can be liberal; avoid puttingyourself before others and you can become a leader among men.” –Lao Tzu“The first responsibility of a leader is to define reality. The last is to say, ‘Thankyou.’ In between, the leader is a servant.” –Max De PreeE. Leadership is Lifting Others“Blessed is the leader who seeks the best for those he serves.” –Unknown“Outstanding leaders go out of their way to boost the self-esteem of theirpersonnel. If people believe in themselves, it’s amazing what they canaccomplish.” –Sam Walton“Leadership is getting someone to do what they don’t want to do in order toachieve what they want to achieve.” –Tom Landry“A good leader inspires others with confidence in him; a great leader inspiresthem with confidence in themselves.” –Unknown“Leadership must be based on goodwill. Goodwill does not mean posturing and,least of all, pandering to the mob. It means obvious and wholeheartedcommitment to helping followers. We are tired of leaders we fear, tired of leaderswe love, and of tired of leaders who let us take liberties with them. What we needfor leaders are men of the heart who are so helpful that they, in effect, do awaywith the need of their jobs. But leaders like that are never out of a job, never out offollowers. Strange as it sounds, great leaders gain authority by giving it away.”–Admiral James B. StockdaleF. Leadership is Vision“Leadership is not magnetic personality — that can just as well be a glib tongue. Itis not making friends and influencing people — that is flattery. Leadership islifting a person’s vision to high sights, the raising of a person’s performance to aLeadership Bill Scheidler, 2009Teacher’s Manual5

higher standard, the building of a personality beyond its normal limitations.”–Peter F. Drucker“Leadership is the special quality which enables people to stand up and pull therest of us over the horizon.” –James L. Fisher.“The first basic ingredient of leadership is a guiding vision. The leader has a clearidea of what he wants to do – professionally and personally – and the strength topersist in the face of setbacks, even failures.” –Warren Bennis“The very essence of leadership is that you have to have a vision. It’s got to be avision you articulate clearly and forcefully on every occasion.”–Theodore Hesburgh“Leadership: Seeing further down the road than those around me.” –Bill GothardG. Leadership is Daring“Do not follow where the path may lead. Go instead where there is no path andleave a trail.” –Emerson“The task of the leader is to get his people from where they are to where they havenot been.” –Henry Kissinger“There are many elements to a campaign. Leadership is number one. Everythingelse is number two.” –Bernd BrecherH. Leadership is Courage under Pressure“All of the great leaders have had one characteristic in common: it was thewillingness to confront unequivocally the major anxiety of their people in theirtime. This, and not much else, is the essence of leadership.”–John Kenneth Galbraith“Anyone can hold the helm when the sea is calm.” –Publilius Syrus“The ultimate measure of a man is not where he stands in moments of comfort,but where he stands at times of challenge and controversy.”–Martin Luther King, Jr.“Leadership is the ability to hide your panic from others.” –Unknown“Leaders must be tough enough to fight, tender enough to cry, human enough tomake mistakes, humble enough to admit them, strong enough to absorb the pain,and resilient enough to bounce back and keep on moving.” –Jesse JacksonI. Leadership is Discipleship“The final test of a leader is that he leaves behind him in other men the convictionand the will to carry on.” –Walter LippmannLeadership Bill Scheidler, 2009Teacher’s Manual6

“How do you know you have won? When the energy is coming the other way andwhen your people are visibly growing individually and as a group.”–Sir John Harvey-Jones“Leadership is the ability to establish standards and manage a creative climatewhere people are self-motivated toward the mastery of long term constructivegoals, in a participatory environment of mutual respect, compatible with personalvalues.” –Mike Vance“I start with the premise that the function of leadership is to produce more leaders,not more followers.” –Ralph NaderJ. Other Leadership Quotes“Great leaders are almost always great simplifiers, who can cut through argument,debate, and doubt to offer a solution everybody can understand.”–General Colin Powell“No man will make a great leader who wants to do it all himself or to get all thecredit for doing it.” –Andrew CarnegieThe challenge of leadership is to be strong, but not rude; to be kind, but not weak; to be bold, but not bully; to be thoughtful, but not lazy; to be humble, but not timid; to be proud, but not arrogant; to have humor, but without folly.–Jim RohnII.What is the definition of “leadership”?A. There are many definitions that have been given to the concept of “leadership.”The following are just a few of them:1. From WikipediaLeadership has been described as the “process of social influence in which oneperson can enlist the aid and support of others in the accomplishment of acommon task.”A definition more inclusive of followers comes from Alan Keith of Genentechwho said “Leadership is ultimately about creating a way for people tocontribute to making something extraordinary happen.”2. From BusinessDictionary.comLeadership Bill Scheidler, 2009Teacher’s Manual7

LEADING FROM WITHIN: Building Organizational Leadership .

The Making of the Principal: Five Lessons in Leadership .

THE NATURE OF LEADERSHIP - sagepub

HOW TO USE THIS MANUAL - Warranty Flat Rate Manual