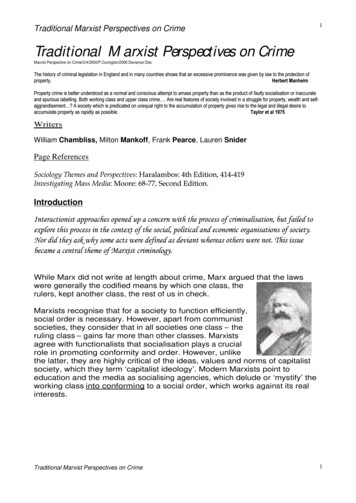 Traditional Marxist Perspectives on Crime1Traditional M arxist Perspectives on CrimeMarxist Perspective on Crime/3/4/2000/P.Covington/2000 Deviance DiscWritersWilliam Chambliss, Milton Mankoff, Frank Pearce, Lauren SniderPage ReferencesIntroductionWhile Marx did not write at length about crime, Marx argued that the lawswere generally the codified means by which one class, therulers, kept another class, the rest of us in check.Marxists recognise that for a society to function efficiently,social order is necessary. However, apart from communistsocieties, they consider that in all societies one class – theruling class – gains far more than other classes. Marxistsagree with functionalists that socialisation plays a crucialrole in promoting conformity and order. However, unlikethe latter, they are highly critical of the ideas, values and norms of capitalistsociety, which they term ‘capitalist ideology’. Modern Marxists point toeducation and the media as socialising agencies, which delude or ‘mystify’ theworking class into conforming to a social order, which works against its realinterests.Traditional Marxist Perspectives on Crime1

Traditional Marxist Perspectives on Crime2Basic Beliefs:The idea that the poor are driven to commit crime strongly underpins the theoriesof those criminologists who have taken Marx’s work further Deviance is partly the product of unequal power relations and inequality ingeneral. It is an understandable response to the situation of poverty.See power as largely being held by those who own the factors of production.Crime is often the result of offering society-demeaning work with little sense of creativity. The Marxistconcept of alienation can be applied here.The superstructure serves the ruling classes.The state passes laws, which support ruling class interests. Maintain its power, coerce, and control theproletariat. They see individual property rights as much more securely established in law than thecollective rights of, for instance, trade unions.Laws passed reflect the wishes and ideologies of the ruling classes.Moreover, people have unequal access to the law. Having money to hire a good lawyer can meantthe difference between being found not guilty or guilty.Thus for Marxists punishment for a crime may depend and vary according to the social class of theperpetrator.Given the Above the Main issues for Marxists are.The manipulation of basic values and morality of societyThe process of law creation.The enforcement of lawIndividual motivation.Who Makes the LawsFrom a Marxist Viewpoint.Laws are made by the state, which represent the interests of the ruling class.This line of argument forms the basis of a theory of widespread crime andselective law enforcement; crime occurs right the way through society, butpoor criminals receive harsher treatment than rich criminals. Marxists tend to emphasise‘white collar, corporate crime’ and pay less attention to ‘blue collar’ variants. They note thatthe crimes of the upper class exert a greater economic toll on society than the crimes of the‘ordinary people’Definitions of Business Crime from A Marxist ViewpointCorporate or Business Crime: This term is usually applied to business persons holdingpower who engage in fraudulent activity on behalf of their company to raise profits. Thionotes that the economic cost of corporate crime is between 24 times to 42 times greaterthan losses accounted for by ‘traditional’ property crimes.White Collar Crime: term that is more generic used for a range of crime in business.Organised Crime: Best known examples include the MAFIA, where a complex web ofpolitics, the law and big business can all be intertwined in a world of corruption andTraditional Marxist Perspectives on Crime2

Traditional Marxist Perspectives on Crime3violence. Violence against members of the USA population by corporate gangsters in pursuitof profit far exceeds violence by ‘lower class street criminals’Mannheim and Chambliss: Excessive Protection of PropertyMany sociologists have noted the large number of laws dealing with property in capitalist society.For example, Hermann Manheim writes that.The history of criminal legislation in England and in many countries shows that an excessiveprominence was given by law to the protection of property.According to William Chambliss, such laws were largely unnecessaryin feudal society were land, unmoveable property, was the main sourceof wealth and landowners were the undisputed masters of theeconomic resources of the country.However, with the increasing importance of trade and commerce, which involve movable property,and the eventual removal of feudalism by capitalism resulted in vast numbers of laws protecting theinterests of the emerging class. Chambliss argues.The heart of the capitalist system is the protection of privateproperty, which is, by definition, the cornerstone upon whichcapitalistic economies function. It is not surprising, then, to findthat criminal laws reflect this basic concern.Snider: Big Corporations Benefit from the Legal SystemLauren Snider notes that capitalistic state is oftenreluctant to pass laws, which regulate big businessconcerns, which might threaten profitability. She notesthat capitalist states often use vast sums to attractinvestment from big corporations. They offer newinvestors.Tax concessionsCheap loansGrantsBuild infrastructures to help capitalism.Snider suggests having offered this the state is unwilling to enforce laws againstpollution, workers health, and safety; or monopoliesTraditional Marxist Perspectives on Crime3

Traditional Marxist Perspectives on Crime4Bhopal - The Dangers of Unrestricted CapitalismNAMEAGEAGE AT DISASTERNEIGHBOURHOODRaisa BeeDied aged 164Teela JamalpuraShe died at 6.45 in the morning of 31st October 1996 in the TB Hospital.She was four years old when she was severely exposed to Carbide's toxicgases. In the interview her mother gave she recalled, "That night my littledaughter was vomiting all over the place and soiling her clothes over andover. She was coughing and gasping for breath and crying that her eyeswere on fire. She was very ill for over a week and we thought the worstwas over. A few months later her problems worsened and she would getacutely breathless and bring out sputum when she coughed. Shecontinued to have burning sensation in the eyes. She got weaker andweaker and was wheezing all the time. She lost her appetite for food andstayed depressed all the time. Then we spotted streaks of blood in hersputum. We took her to different doctors and hospitals but her conditiondid not improve. She vomited a lot of blood before she died." The medicalrecords available with her mother show that Raisa was admitted at the JLNHospital on 7.8.'96 for 20 days with complaints of breathlessness, coughand anxiety attacks. Chest x-ray report dated 30.10.'96 from the TBHospital mentions "Bilateral infiltration with cavity formation left mid zone".All three doctors in the assessment panel in the Sambhavna Clinic'sVerbal Autopsy project have opined that Raisa's death is attributable to herexposure to Carbide's gases and the injuries caused to her respiratory andneuropsychiatric systems. In their opinions tuberculosis was acomplication that arose out of the injury caused to her lungs.No claim for compensation for Raisa's death has been registered.Traditional Marxist Perspectives on Crime4

Traditional Marxist Perspectives on Crime5The Guinness AffairThis case involved fraudulent leaks to the financialmarkets by Guinness directors, which artificially boostedthe price of Guinness shares. The directors concernedmade sizeable profits from the company directly andindirectly for themselves. One of the convicted offenders,Gerald Ronson, (one of Britain’s 100 richest people)received a one-year sentence in Ford Open Prison andwas released on parole after serving about 6 months.During his time in prison, he had access to a telephone, and his wife continued to run the groupof companies he owned. Since his release, he has continued to be a successful businessman.Another of the convicted offenders, Ernest Saunders, received a five-year sentence and wasreleased after about 18 months because of being diagnosed as suffering from Alzheimer’sdisease. Since then, it has proved to be a false diagnosis and Ernest Saunders has now asuccessful business consultant.Exercise OneShow how the articles support the Marxist view of crime in a capitalist society. Make 5 statements that wouldsupport this view and three that would reject this view.Exercise TwoQuinney considers the following components the key components within a Marxist analysis of crime.Compete the sentences with the word below to make sense of them.1. America and by implication Britain is first and foremost an advanced . society.2. Within capitalist societies, the state is organised to serve the interests of the capitalist .3. Laws and conventions are created by the state and the capitalist class to preserve existingsocial relations of 4. Laws and conventions are created by the state and the capitalist class to preserve existingsocial relations of 5. In order to maintain order in society, the control of crime (and deviance) isundertaken by state agencies, such as the .6. As a result of this, working class people remain oppressed, particularlythrough . means.7. Crime and deviance can only be eradicated with the collapse of capitalism andthe creation of a society.Traditional Marxist Perspectives on Crime5

Traditional Marxist Perspectives on Crime1.2.3.4.5.6.6Police and xercise ThreeMarxist sociologists claim that society is divided ideologically as well as socially. In saying this, they alertus to the facts that not only are there different classes, but there are different class interests. To identify theexistence of these competing interests or the following statements into pairs which express opposing views?Which of Marx’s two broad classes do you think would agree with each statement?1. Strikes are one of the few ways in which workers can exert the influence over their payand conditions of employment.2. Is it right that those who have a great deal of wealth should not be taxed heavilybecause they have earned it!3. The shareholders of major companies want their employees tobe paid a fair wage for the work they do.4. Taxes on rich people should be much higher than at presentbecause they have made their wealth largely by exploitingordinary working people.5. All that shareholders of companies are interested in is inmaximising the returns they get on their shares.6. Strikes are unnecessary and counter-productive because they interfere with the smoothrunning of industry for the benefit of owners, management and workers alike.Exercise FourLook at the following statements; link them either to Marxism, Functionalism, Interactionism, orBiological Explanations or Feminism 1. Criminal law is not neutral but instead is an instrument of the ruling class.2. Individuals become deviant through social processes. Societal reactions to deviancehave implications for those labelled deviant in society.3. Crimes heighten social solidarity by uniting us against the offender.4. Criminals can be scientifically differentiated from non-criminals.5. Not only does criminal law reflect the interests of the powerful, so too does thecriminal justice system.6. Capitalism creates crime.7. Women have been neglected or misrepresented in theories of crime and criminaljustice policies.8. Crime can only be dealt with through major social, political and economic change.Traditional Marxist Perspectives on Crime6

Traditional Marxist Perspectives on Crime9.7Social processes are key to what is defined and not defined as deviant.10. Exercise FiveLooks at the following are they strengths or weaknesses of Marxism1. The Marxist solution is simple yet monumental: it capitalism creates crime, ifcapitalism is the problem, then the solution is clear, get rid of capitalism.2. Marxists tend to view the behaviour of individuals as largely governed byexternal forces. Thus their accounts are somewhat deterministic. Sometheorists argue that individuals retain free will, which enables them to decidewhether they want to commit crime.3.4. Marxists tend to represent working class crime as a creative response tooppression when reality is that much workingclass crime is directed at working class people.Moreover, they do not fully explain why allworking class people do not commit crime.5. It seems to ignore the individual motivation.The stress is primarily on the nature ofcapitalism and how economic factors ‘force’people to act in certain ways.6. It seems implausible to explain all laws interms of the interests of the ruling elite; many laws appear to rest on generalagreement.7. Socialist states also have high crime rates at least as great as our own.Resources Used in this HandoutSociology Themes and Perspectives: Michael HaralambosIntroductory Sociology: Bilton et al 3rd EditionCrime, Deviance and Social Control: Emma Wincup and Janis Griffiths.Deviance: Peter Aggleton, Society Now Series of BooksSociology and Interactive Approach: Nik Jorgensen et alInvestigating Deviance: Stephen Moore, Second Edition.Introduction to Sociology: Mike O’Donnell, 4th Edition.Marcrime/30/9/97/P.Covington/1997Marxist Perspective on Crime/10/7/98/P.Covington/1997Traditional Marxist Perspectives on Crime7

This line of argument forms the basis of a theory of widespread crime and selective law enforcement; crime occurs right the way through society, but . Definitions of Business Crime from A Marxist Viewpoint Corporate or Business Crime: This term is usually applied to business persons holding

What Is Criminology? Understanding Crime and Criminals

The impact of gunshots on place-level business activity

Do Foreclosures Cause Crime? - blogs2.law.columbia.edu