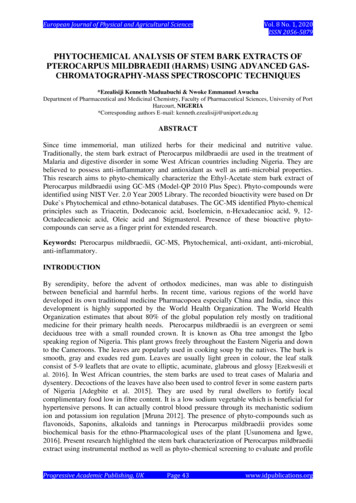 European Journal of Physical and Agricultural SciencesVol. 8 No. 1, 2020ISSN 2056-5879PHYTOCHEMICAL ANALYSIS OF STEM BARK EXTRACTS OFPTEROCARPUS MILDBRAEDII (HARMS) USING ADVANCED GASCHROMATOGRAPHY-MASS SPECTROSCOPIC TECHNIQUES*Ezealisiji Kenneth Maduabuchi & Nwoke Emmanuel AwuchaDepartment of Pharmaceutical and Medicinal Chemistry, Faculty of Pharmaceutical Sciences, University of PortHarcourt, NIGERIA*Corresponding authors E-mail: [email protected]BSTRACTSince time immemorial, man utilized herbs for their medicinal and nutritive value.Traditionally, the stem bark extract of Pterocarpus mildbraedii are used in the treatment ofMalaria and digestive disorder in some West African countries including Nigeria. They arebelieved to possess anti-inflammatory and antioxidant as well as anti-microbial properties.This research aims to phyto-chemically characterize the Ethyl-Acetate stem bark extract ofPterocarpus mildbraedii using GC-MS (Model-QP 2010 Plus Spec). Phyto-compounds wereidentified using NIST Ver. 2.0 Year 2005 Library. The recorded bioactivity were based on DrDuke s Phytochemical and ethno-botanical databases. The GC-MS identified Phyto-chemicalprinciples such as Triacetin, Dodecanoic acid, Isoelemicin, n-Hexadecanioc acid, 9, 12Octadecadienoic acid, Oleic acid and Stigmasterol. Presence of these bioactive phytocompounds can serve as a finger print for extended research.Keywords: Pterocarpus mildbraedii, GC-MS, Phytochemical, anti-oxidant, anti-microbial,anti-inflammatory.INTRODUCTIONBy serendipity, before the advent of orthodox medicines, man was able to distinguishbetween beneficial and harmful herbs. In recent time, various regions of the world havedeveloped its own traditional medicine Pharmacopoea especially China and India, since thisdevelopment is highly supported by the World Health Organization. The World HealthOrganization estimates that about 80% of the global population rely mostly on traditionalmedicine for their primary health needs. Pterocarpus mildbraedii is an evergreen or semideciduous tree with a small rounded crown. It is known as Oha tree amongst the Igbospeaking region of Nigeria. This plant grows freely throughout the Eastern Nigeria and downto the Cameroons. The leaves are popularly used in cooking soup by the natives. The bark issmooth, gray and exudes red gum. Leaves are usually light green in colour, the leaf stalkconsist of 5-9 leaflets that are ovate to elliptic, acuminate, glabrous and glossy [Ezekwesili etal. 2016]. In West African countries, the stem barks are used to treat cases of Malaria anddysentery. Decoctions of the leaves have also been used to control fever in some eastern partsof Nigeria [Adegbite et al. 2015]. They are used by rural dwellers to fortify localcomplimentary food low in fibre content. It is a low sodium vegetable which is beneficial forhypertensive persons. It can actually control blood pressure through its mechanistic sodiumion and potassium ion regulation [Mruna 2012]. The presence of phyto-compounds such asflavonoids, Saponins, alkaloids and tannings in Pterocarpus mildbraedii provides somebiochemical basis for the ethno-Pharmacological uses of the plant [Usunomena and Igwe,2016]. Present research highlighted the stem bark characterization of Pterocarpus mildbraediiextract using instrumental method as well as phyto-chemical screening to evaluate and profileProgressive Academic Publishing, UKPage 43www.idpublications.org

European Journal of Physical and Agricultural SciencesVol. 8 No. 1, 2020ISSN 2056-5879the phyto-chemical principle present in the extract for possible lead optimization andjustification of their ethno-medicinal uses by the natives.Materials and MethodsChemicalsEthyl-acetate and n-Hexane used were of analytical grade and purchased from Sigma Aldrich(St.Louis, MO, USA).Plant Material ExtractionThe stem bark of Pterocarpus mildbraedii tree was collected in a small farm located inUmulemia village in Isiala Mbano Local Government Area, Imo State, Nigeria in the monthof April, 2019. The plant was authenticated by Pharm. Osuala of the Department ofPharmacognosy, Faculty of Pharmacy, Madonna University, Elele, Rivers State, Nigeria. Avoucher specimen (MUPH 269502) of the stem bark sample was deposited in the herbariumof the Department. The dried stem bark of P.mildbraedii was milled to fine powder usingWilley Mill (Thomas Willy mills, Swedesboro, NJ, USA). 800 g of pulverized stem bark wasdefatted by macerating with n-Hexane, (3 L) for 72h, filtered and the marc obtained was airdried before macerating in Ethyl-acetate (2 L) for 72 h and subsequently filtered. The filtrateobtained were concentrated under vacuum and reduced pressure using, Buchi, Rotaryevaporator, R-205, BUCHI Labortechnik AG CH-9230, F/Switzerland at 450C.Gas-Chromatographic – Mass Spectrometric AnalysisThe Ethyl-acetate extract was re-dissolved in the extracting solvent, vortexed and filteredthrough 0.45 µm sintered glass funnel. A 1.0 µl aliquot solution of the sample was injectedinto the above mentioned analytical equipment.Instrument and Chromatographic ConditionsInstrumental analysis was carried out on a Model 7890A gas chromatograph in tandem withModel 7000B (TQ) Mas-Spectrometer with (EI) source equipped with a model 7693 autosampler (Product of Shimadzu, Tokyo, Japan). The capillary column used here is V5 5 msfused micro silica capillary column of 30 m length, 0.25 mm diameter and 0.25 µm filmthickness. Helium (99.99%) was employed as the carrier gas at a constant flow rate of 1.58ml/min. The injector and mass transfer line temperature were set at 240 to 200oCrespectively, and the injection volume of 1 µl was maintained. The MS operating conditionwere as follows: ionization energy, 70 eV: ion source temperature, 200 0C, Solvent cut time,2.5 min, Scan mode is 1666 µ/sec: Scan range is 40-800 µm, the interface temperature is 250oC. Overall running time was 30 min. The percentage peak area and peak ratio was expressed.Compound IdentificationThe percentage composition of each Phyto-chemical entity was calculated by comparing itsaverage peak area to the total areas. The identification employed the NIST (National Instituteof Standard and Technology) Ver. 2.0 Year 2005 Library. The compound biological activityprediction is based on Dr Duke s Phytochemical and Ethno-botanical Databases by Dr. JimDuke of the Agricultural Research Service/ USDA [Shyamala and Manikandan, 2019].Interpretation of GC-MS was conducted using the database of the NIST having more than62,000 patterns. The name and molecular weight of the phyto-compounds of the testmaterials were highlighted.Progressive Academic Publishing, UKPage 44www.idpublications.org

European Journal of Physical and Agricultural SciencesVol. 8 No. 1, 2020ISSN 2056-5879DISCUSSIONThe use of herbs and other medicinal plants as remedies for diseases in both animals andhumans is as old as man himself. Through the structural elucidation of active components ofthese plants; novel bioactive compounds have been discovered and subsequently modifiedstructurally to improve activity or reduce adverse effects. (Ezealisiji et al., 2020)The Gas chromatography-Mass spectroscopic analysis of the ethyl-acetate stem bark extractof Pterocarpus mildbraedii showed 12 prominent peaks which corresponds to 12 differentphytochemical compound.Triacetin is a triglyceride produced when the three hydroxyl group of glycerol is acetylated. Itis used as a food additive serving as a solvent in flavouring, as a humectant and plasticizer inthe production of pharmaceuticals. It has also found use in the synthesis of biodegradablephospholipid get system used in the dissemination of cancer drug paclitaxel. (Chen T et al.,2017). Studies have also shown that it can be applied directly in the treatment of glioblastomadue to its ability to mediate acetate supplementation thereby inhibiting cell growth process ofgliobastima (Long et al., 2015)Dodecanoic acid is a 12 carbon saturated medium chain fatty acid also known as lauric acid.It is a white solid with slight odour of bay oil commonly found in coconut and kernel oil.Progressive Academic Publishing, UKPage 49www.idpublications.org

European Journal of Physical and Agricultural SciencesVol. 8 No. 1, 2020ISSN 2056-5879Biologically, it serves as a membrane stabilizer, energy source, energy storage and nutrient. Ithas been shown to possess antimicrobial property. Due to its very low toxicity, its salt form,sodium laurate is used in many shampoos and soaps. (Anneken et al., 2006)Isoelemicin also called trans-isoelemicin belongs to the anisoles class of organic compound.It is an extremely weak olefinic base with a molecular weight of 208.25g /mol. Isoelemicin iscommonly used a pharmaceutical adjuvant.N-hexadecanoic acid also called palmitic acid is a saturated fatty acid readily found in plants,animals and even microorganisms. It is the major constituent of oil gotten from the fruit of oilpalm. It has found application in soap, cosmetics, industrial mold release agent and as aninexpensive additive to processed food to improve its “mouth feel”. It been shown to possessantioxidant, hypocholesterolemic, nematicide, pesticide, lubricant, anti-androgenic,hemolytic, 5-Alpha reductase inhibitor properties. It is also used in the formulation of longacting release carrier medium such as in the use of oily palmitat ester in the synthesis ofpaliperidone palmitate. The observed 9, 12- Octadecadienoic acid (Linoleic acid) is a polyunsaturated omega-6 fatty acid which is colourless and insoluble in water. It is one of the twoimportant fatty acids in human, mostly obtained from diet. It is useful in the manufacturingquick-drying oils most commonly used in oil paints and vanishes (Diezel et al., 1993). It isalso used in cosmetics due to its beneficial effect on the skin. Its lipid redical is harnessed indemonstrating the antioxidant property of polyphenols and natural phenols. (Peyrat-Mailardet al., 2003) Studies have shown that possess 5-Alpha reductase inhibitor, antiandrogenic,antiarteriosclerotic, anticoronary, antifibrinolytic, antihistaminic, antiinflammatory,antileukotrienic, antiprostatic, hepatoprotective, carcinogenic, immunomodulator,antieczemic, and hypocholesteramic properties.Oleic acid is a mono-saturated omega-9 fatty acid found naturally in various animals andvegetable fat and oils. Ideally, it is usually colourless and odourless. Oleic acid in itstriglyceride form is used as a component in many foods. Its sodium salt is used readily usedas an emulsifying agent and emollient in soap and in the formulation of aerosol products. Ithas also found use in the solution phase synthesis of nanoparticles where it acts as a kineticknob to aid the control of size and morphology of nanoparticles.Squalene is a triterpene and a hydrocarbon compound. It is produced by all plants andanimals including human, as a biochemical intermediate for the synthesis of all plant andanimal sterols including steroid hormones cholesterol in human. It has pharmacological,cosmetic and nutritional potentials. Squalene is used in combination with surfactant inadjuvant formulation for vaccine; it reduces skin damage caused by UV radiation, cholesteroland LDL in the blood. (WHO advisory committee on vaccine safety)Stigmasterol is an unsaturated plant sterol found in the fat and oil of most herbs. Due to itsknown ability to reduce atherosclerosis, and its cardioprotective and cholesterolyticproperties, it is used as food additive and as food constituent to increase the phytosterolcontent and LDL cholesterol lowering ability of such food. It serves as a precursor for thelarge scale manufacture of semisynthetic progesterone, an important human hormone.Stigmasterol is also used a precursor for boldenone, commonly used to growth in cattle.(Hogg J. et al., 1992)Progressive Academic Publishing, UKPage 50www.idpublications.org

The recorded bioactivity were based on Dr Duke s Phytochemical and ethno-botanical databases. The GC-MS identified Phyto-chemical principles such as Triacetin, Dodecanoic acid, Isoelemicin, n-Hexadecanioc acid, 9, 12- . Interpretation of GC-MS was conducted using the database of the NIST having more than 62,000 patterns. The name and .

50 STEM activities for any primary classroom