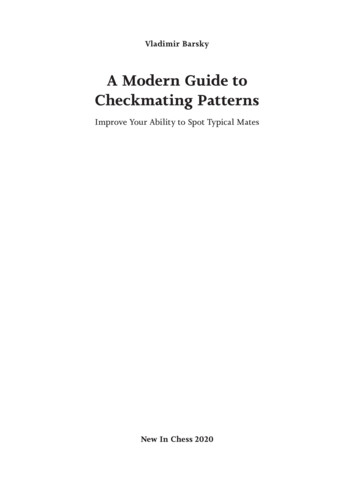 FOREWORDIn the footsteps of The Last CheckThis book is dedicated to the fond memory of Viktor Lvovich Khenkin.The idea for this book first arose about ten years ago, when I edited ViktorLvovich Khenkin’s classic textbook The Last Check. I was surprised that hisoriginal methodology for finding mating combinations did not generallyreceive serious attention. Maybe this was because Viktor Lvovich’s pasttraining achievements had been forgotten? After all, he taught chess at thenow rebuilt and renamed young pioneer stadium, and was trainer of theMoscow junior team, which was victorious in All-Union championships.In addition, Khenkin the theoretician was one of the founders of theSozin Attack and wrote a whole chapter in Yuri Averbakh’s famous fivevolume endgame course.In the great majority of books devoted to chess tactics, combinationsare categorized by theme: double attack, deflection, attraction, overload,discovered attack, line-opening, etc. But how are you supposed to know,when sitting at the board with the clock ticking, what you should belooking for, whether a fork, a deflection, a line-opening, etc.? In practice,everything usually happens the other way round: first the player finds acombinational motif, using his experience and the associations thereof,and then works out how to effect it correctly. Only after the idea has beenrealized does the happy victor think about which tactical device he used.Viktor Khenkin tried to make his method as close as possible topractical play. Here is an extract from Mikhail Tal’s preface to TheLast Check: ‘When I examine a concrete position, I notice first of allits particular characteristic, the mutual piece placements, and theirconnections. And suddenly (in the majority of cases this happensintuitively) the outlines of some new position will flash up, tantalizingand attractive. It is not yet on the board, of course, but all the signs arethat it could arise. Then the chase for the bird begins. Often, calculatingthe variations is a Sisyphean task. The position in the mind’s eye is almostimpossible to reach, even if the opponent enters into “cooperation” withyou. Some piece is on the wrong square, some pawn gets in the way.but sometimes a tedious search of variations brings real results. Moveby move, one approaches the desired final position, which one saw fromafar. And if the circle of variations is closed, then. then you can start acombination.’7

A Modern Guide to Checkmating PatternsThe remarkable trainer and Soviet Master of Sport, Viktor LvovichKhenkin (1923-2010), proposed systematizing mating schemes or‘pictures’ by reference to the piece or pawn which brought the mate to itsconclusion. It turned out that there were not so many of these schemes– about a hundred basic ones – and only about 20-30 which occur in thegreat majority of mating combinations. These can be remembered evenby an inexperienced player: ‘it’s not rocket science’, as the popular sayingruns.Luck brought me a long acquaintance with Viktor Lvovich Khenkin.At the start of the millennium, he was the mentor and senior comrade ofvarious young journalists: Oleg Pervakov, Maxim Notkin, Ilya Odessky,Andrey Paneyakh and the present author. We tried to learn from theMaestro all the best. A workaholic, he did not tolerate hack-work orroutine stuff, and he perfectly mastered the literary Russian language.And the non-literary too: oh, how he cursed, when I wrote ‘pieces of iron’instead of ‘piece of iron’ in one title he proposed! He constantly repeatedto us: ‘Do not dismiss small things, trifles are the most important, theycreate an image!’ The children of Twitter and Instagram are unlikely toappreciate it, but how many hours we spent on coming up with a sharpheadline even for articles of second-rate importance, not to mention reallytop-class ones. They were great hours of creative search!I am proud of the fact that I wrote my first book, dedicated to theFrenchman François Philidor, in co-authorship with Viktor Lvovich.Then I helped re-issue 1000 Checkmate Combinations as the special editor. Inchecking every example with the computer, I once again saw the integrityof Viktor Lvovich: only a very small number needing correcting and then,usually only cosmetically, tidying up illustrative variations. As every daywent by, I came to like the book more and more and I resolved to write afollow-up, using games played in the 21st century. But the classificationremains much the same as that used in the classic.In the words of Viktor Lvovich: ‘Since all the pieces differ amongthemselves according to their range and rules of movement, each ofthem has its favorite “profession”. In this sense, chess can be comparedwith an ice hockey team, where each player has worked out shots on goalfrom different points of the ice rink. The same can be said about thedistribution of roles in the joint attack on the king. Some pieces prefer a“passing” role, while others “hit the puck” by themselves.’This book A Modern Guide to Checkmating Patterns is divided into tenchapters: first, we present schemes and examples with explanations, andthen positions for independent solving. These number 851. A good sourcewas the online magazine Chess Today (chief editor Alexander Baburin),8

Forewordwhere I worked from 2000-2008. At first, I had 1,000 or so examples,but some fell by the wayside. I have spent some ten years working on thebook, on and off, and I should like to thank my former colleague AndreyPaneyakh for his great help, without which this manuscript would still begathering (virtual) dust on the computer.We will conclude this Foreword with a further quote from Mikhail Tal: ‘Ofcourse, chess creativity is not limited to what is set out here. Each playercreates further, according to his talent and imagination. But as for thatwhich can be known, there is no need to reinvent the wheel.’Vladimir BarskyMoscow, April 20209

Chapter 3 – The minor pieces and pawns. . Ml.nS J . . . . . .b. M.jJB N. .dMl.sB.n.M . .NkB. .lMI . .b.n.Two bishops are especially strong in the hands of the attacking side. Often,after delaying castling, the king is nailed to its initial position by theirjoint efforts, but he frequently has trouble in the corner as well. .m. JB .b. .Ml.S . B. .b. Mt. SB .b. .M . .k.b. BThe pawn, in order to give mate, needs the active assistance of his ownand often the enemy units as well. This is because, in checking the king, itdoes not control a single escape square.(see next page)45

Then I helped re-issue 1000 Checkmate Combinations as the special editor. In checking every example with the computer, I once again saw the integrity of Viktor Lvovich: only a very small number needing correcting and then, usually only cosmetically, tidying up illustrative variations. As every day went by, I came to like the book more and more and I resolved to write a follow-up, using games .

A Survey by Geography, from Ancient Times to the Modern Age