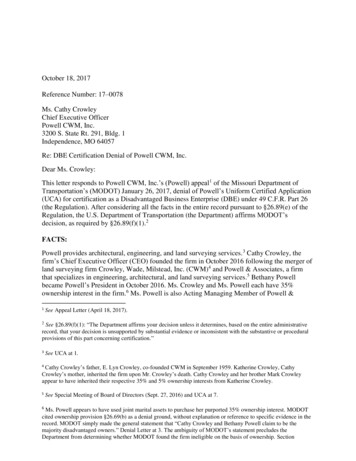 October 18, 2017Reference Number: 17–0078Ms. Cathy CrowleyChief Executive OfficerPowell CWM, Inc.3200 S. State Rt. 291, Bldg. 1Independence, MO 64057Re: DBE Certification Denial of Powell CWM, Inc.Dear Ms. Crowley:This letter responds to Powell CWM, Inc.’s (Powell) appeal1 of the Missouri Department ofTransportation’s (MODOT) January 26, 2017, denial of Powell’s Uniform Certified Application(UCA) for certification as a Disadvantaged Business Enterprise (DBE) under 49 C.F.R. Part 26(the Regulation). After considering all the facts in the entire record pursuant to §26.89(e) of theRegulation, the U.S. Department of Transportation (the Department) affirms MODOT’sdecision, as required by §26.89(f)(1).2FACTS:Powell provides architectural, engineering, and land surveying services.3 Cathy Crowley, thefirm’s Chief Executive Officer (CEO) founded the firm in October 2016 following the merger ofland surveying firm Crowley, Wade, Milstead, Inc. (CWM)4 and Powell & Associates, a firmthat specializes in engineering, architectural, and land surveying services.5 Bethany Powellbecame Powell’s President in October 2016. Ms. Crowley and Ms. Powell each have 35%ownership interest in the firm.6 Ms. Powell is also Acting Managing Member of Powell &1See Appeal Letter (April 18, 2017).See §26.89(f)(1): “The Department affirms your decision unless it determines, based on the entire administrativerecord, that your decision is unsupported by substantial evidence or inconsistent with the substantive or proceduralprovisions of this part concerning certification.”23See UCA at 1.Cathy Crowley’s father, E. Lyn Crowley, co-founded CWM in September 1959. Katherine Crowley, CathyCrowley’s mother, inherited the firm upon Mr. Crowley’s death. Cathy Crowley and her brother Mark Crowleyappear to have inherited their respective 35% and 5% ownership interests from Katherine Crowley.456See Special Meeting of Board of Directors (Sept. 27, 2016) and UCA at 7.Ms. Powell appears to have used joint marital assets to purchase her purported 35% ownership interest. MODOTcited ownership provision §26.69(b) as a denial ground, without explanation or reference to specific evidence in therecord. MODOT simply made the general statement that “Cathy Crowley and Bethany Powell claim to be themajority disadvantaged owners.” Denial Letter at 3. The ambiguity of MODOT’s statement precludes theDepartment from determining whether MODOT found the firm ineligible on the basis of ownership. Section

2Associates, having joined the firm in 2005.7,8 Ms. Crowley’s brother, Mark Crowley, joinedPowell in October 2016 as Secretary and Director of Architecture.9 He owns 5% of the firm10and is non-socially and economically disadvantaged (SED) under the Regulation. Ms. Powell’snon-SED husband, Jeremy Powell, joined Powell in October 2016 as Vice President andCertified Federal Surveyor. He has 25% ownership in the firm.11 Mr. Powell is President ofPowell & Associates.12Powell’s additional employees include Aaron Barnhart, Arnold Woker, Joseph McLaughlin, andTimothy Atkins – all of whom are non-SED and none of whom have ownership interest in thefirm. All are former employees of Powell & Associates and joined Powell at the time of itsfounding. Mr. Barnhart is Powell’s Director of Engineering. Mr. Woker is a licensed architect,Mr. McLaughlin is a Professional Land Surveyor, and Mr. Atkins is a Professional Engineer.13As Powell’s respective Director of Engineering and Project Architect, Mr. Barnhart and Mr.Woker bid and estimate projects; attend bid openings and lettings; and participate insales/marketing activities.14 As Project Surveyors, Mr. McLaughlin and Mr. Atkins bid andestimate projects and attend bid openings and lettings.15 Mr. Crowley, Mr. Powell, Mr. Barnhart,Mr. Woker, Mr. McLaughlin, and Mr. Atkins supervise Powell’s architectural and engineeringdesign work.16 Mr. Crowley, Mr. Powell, and Mr. Barnhart independently negotiate and executecontracts on behalf of the firm.17 Ms. Crowley, Mr. Crowley, Ms. Powell, and Mr. Powell all26.89(f)(5) states: “The Department does not uphold your decision based on grounds not specified in your decision.”(Emphasis added). Similarly, the Department is not rendering a decision on §26.69(f)(1), a provision cited byMODOT that refers to situations wherein expertise is relied upon as part of an SED owner’s contribution. Thisargument is not raised by the firm.7See UCA at 7. Prior to joining Powell & Associates in 2005, Ms. Powell worked at Red Cross Pharmacy from2004-2005 and at Kilgore’s Medical Pharmacy from 2001-2004. Résumés of Owners, Officers, Key Personnel. Thedocument is a composite work history of C. Crowley, B. Powell, J. Powell, and M. Crowley.Powell & Associates provides land surveying services. Powell’s UCA and On-Site Report state that Powell &Associates was to cease operation in December 2016. The record does not contain evidence whether Powell &Associates actually did so.89See UCA at 8 and Résumés of Owners, Officers, Key Personnel.10Mr. Crowley appears to have inherited his ownership interest from his mother, Ms. K. Crowley.11See UCA and Résumés of Owners, Officers, Key Personnel.12See UCA at 7.13See UCA Supplemental Sheet.14See UCA at 10.15See id.16See On-Site Report at 4.17See id. The record shows that Mr. Barnhart provided the sole signature on at least two contracts, in the amounts of 66,832 and 60,009. See Contract Document Review.

3have the power to sign checks on behalf of the firm, at any time and for any amount.18 Thechecks only require one signature.19MODOT denied Powell’s UCA under ownership provision §26.69(b) of the Regulation(discussed in footnote 7 above) and control provisions §§26.71 (b), (g), (k), (m), (h), and (i).20On appeal, Powell contends that the firm meets the requirements of all of those controlprovisions, as well as those of §26.71(f). The Department affirms MODOT’s denial based on§26.71(f) and (g). We decline to opine on MODOT’s §26.71(h),(k),and (i) denial grounds in lightof our disposition on §26.71(f) and (g), which includes a discussion that is sufficient to affirmMODOT’s decision.DISCUSSION:Section 26.61(b) states:The firm seeking certification has the burden of demonstrating to you, by a preponderance of theevidence, that it meets the requirements of this subpart concerning group membership orindividual disadvantage, business size, ownership, and control.(Emphasis added.)Section 26.71(f) states:The socially and economically disadvantaged owners of the firm may delegate various areas ofthe management, policymaking, or daily operations of the firm to other participants in the firm,regardless of whether these participants are socially and economically disadvantaged individuals.Such delegations of authority must be revocable, and the socially and economicallydisadvantaged owners must retain the power to hire and fire any person to whom such authorityis delegated. The managerial role of the socially and economically disadvantaged owners in thefirm's overall affairs must be such that the recipient can reasonably conclude that the socially andeconomically disadvantaged owners actually exercise control over the firm's operations,management, and policy.(Emphasis added).In its appeal letter, Powell contends that the firm satisfies the requirements of §26.71(f) because“Our licensed Department Directors report directly to us. We review and approve/disapprove allbids and RFQs prior to submitting.”21 However, when previously asked which of the firm’sparticipants negotiate and execute contracts, they responded, “Department heads – can executetheir own contracts,” and that those same individuals, i.e., Mr. Crowley, Mr. Powell, Mr.Barnhart, Mr. Atkins, and Mr. Woker, are responsible for the bidding process.– indicating thatthe department directors do not report (directly or indirectly) to Ms. Crowley or Ms. Powell, and18See UCA at 11.19See Bank Resolution and Signatory Cards (Oct. 5, 2016).20See Denial Letter at 3-4.21Appeal Letter at 1.

5reasonably conclude that Ms. Crowley and Ms. Powell actually control the firm’s management,policy, and operations – contrary to the requirements of §26.71(f).Section 26.71(g) states:The socially and economically disadvantaged owners must have an overall understanding of, andmanagerial and technical competence and experience directly related to, the type of business inwhich the firm is engaged and the firm's operations. The socially and economically disadvantagedowners are not required to have experience or expertise in every critical area of the firm'soperations, or to have greater experience or expertise in a given field than managers or keyemployees. The socially and economically disadvantaged owners must have the ability tointelligently and critically evaluate information presented by other participants in the firm'sactivities and to use this information to make independent decisions concerning the firm's dailyoperations, management, and policymaking. Generally, expertise limited to office management,administration, or bookkeeping functions unrelated to the principal business activities of the firmis insufficient to demonstrate control.(Emphasis added).Ms. CrowleyImmediately prior to founding Powell, Ms. Crowley worked at CWM for 37 years.31 At CWMshe performed secretarial duties, office management, and bookkeeping.32 As Powell’s CEO, Ms.Crowley sets policy for the firm’s direction and scope of operations; makes major purchasingdecisions; supervises sales and marketing activities; hires and fires management staff; designatesprofit spending or investment; obligates the firm by contract; purchases equipment and signsbusiness checks.33 She also manages accounts receivable, employee benefits such as 401(k)plans, and payroll administration.34 In addition, she makes and receives phone calls, sends andreceives email, and sends and receives postal mail.35 She does not supervise contract negotiationsor execution, field operations, or architectural and engineering design work. Nor does she holdany of the professional licenses or certifications that Powell’s non-SED owners or directors haveearned.MODOT determined that Ms. Crowley’s duties at CWM do not indicate that she has themanagerial and technical competence related to architecture, engineering, and land surveyingactivities that §26.71(g) requires. Powell did not provide any evidence to demonstrate otherwise.The sheer number of years that Ms. Crowley worked at CWM indicates she could have anoverall understanding of architecture, engineering, and land surveying activities. MODOTfurther concluded that Ms. Crowley’s administrative and secretarial responsibilities at CWM donot indicate that she can critically evaluate information that technical experts (or otherparticipants in the business) provide and accordingly, make informed, independent decisions.31See Résumés of Owners, Officers, Key Personnel.32See On-Site Report at 2.33See UCA at 9.34See Résumés of Owners, Officers, Key Personnel.35See On-Site Report at 4.

6Powell did not provide evidence to the contrary. Rather, Powell provided a host of evidence thatthe firm’s non-SED participants, as discussed above, assume responsibility for evaluatinginformation and making informed, independent decisions in such areas as engineering andarchitectural design work; contract negotiation and execution; and field operations. The recordcontains, at best, scant evidence that Powell’s non-SED participants even consult with Ms.Crowley before making decisions.Having considered Ms. Crowley’s primarily administrative role at Powell, in conjunction withthe primarily administrative role she performed at CWM, MODOT concluded that Ms.Crowley’s expertise is limited to office management, administration, or bookkeeping functionsunrelated to Powell’s principal business activity of providing engineering, architectural, and landsurveying services. Section 26.71(g) makes clear that such expertise is insufficient todemonstrate control.Ms. PowellMs. Powell began her professional career in 2001 at Kilgore’s Medical Pharmacy and Red CrossPharmacy, neither of which are related to architecture, engineering, and land surveyingactivities.36 In 2005 she began working at Powell & Associates, where her husband, Mr. Powell,“did it all” while she focused on administrative tasks.37 Ms. Powell joined Powell in October2016, while maintaining her employment at Powell & Associates.38 As President of Powell, Ms.Powell organizes office operations and procedures; prepares payroll; pays bills; designs filingsystems; reviews and approves supply requisitions; and assigns and monitors clerical functions.39She also purports to review sales reports and financials and compare them to Powell’s short andlong term plans; oversee business development and growth; and direct the firm’s marketingplans.Powell did not provide evidence of how Ms. Powell’s administrative role at Powell & Associateshas given her an overall understanding of Powell’s primary business activities of providingarchitectural, engineering, and land surveying services. MODOT determined that Ms. Powell’sexperience at Powell & Associates does not demonstrate that she has the managerial andtechnical competence related to architecture, engineering, and land surveying activities that§26.71(g) requires.40 MODOT further concluded that performing administrative tasks at Powell& Associates for 11 years does not demonstrate that Ms. Powell has the ability to criticallyevaluate information that technical experts (or other participants in Powell) provide andaccordingly, make informed, independent decisions. Powell did not provide evidence36See id.37On-Site Report.38See Résumés of Owners, Officers, Key Personnel.39See id.; see also On-Site Report at 4.40As evidence of Ms. Powell’s technical experience or expertise, Powell stated that Ms. Powell would receive herCertified Floodplain Managers (CFM) certification in May 2017, allowing her to supervise Powell’s floodplainmanagement and flood hazard projects and ultimately, lead to the firm’s growth and success. See id. As of the dateof Powell’s appeal to the Department (April 18, 2017), Ms. Powell did not have this certification. The Departmentdoes not base its appeal decisions on future events. See 26.89(f)(6): “The Department's decision is based on thestatus and circumstances of the firm as of the date of the decision being appealed.” (Emphasis added).