International Journal Of Education & The Arts 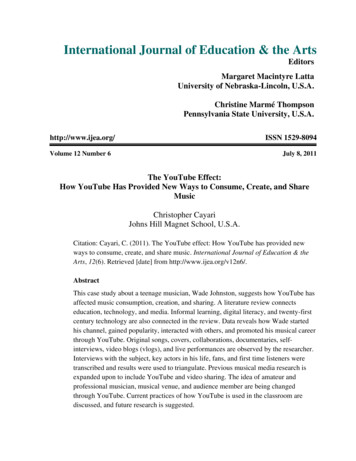 IJEA Vol. 12 No. 6 - http://www.ijea.org/v12n6/2BackgroundTeens evidently don’t see computers as technology. It’s as if they have developed aninnate ability for text-messaging, iPodding, gaming, and multitasking on multipleplatforms. They can share their life story on Facebook, entertain each other onYouTube, muse philosophically in the blogosphere, contribute to knowledge onWikipedia, create cutting-edge art on Flickr, and compile archives on Del.icio.us.(Hartley, 2009, p. 129)YouTube Has Affected MusicEducators and artists alike are seeing new ways to express their art though technologicalmeans. Digital technology has brought with it new media. This article examines howYouTube, one such media, has become a powerful space that affords new ways to consume,create, and share music. Because of YouTube and similar media venues, music performanceand education have been changing. These media are resources to educators and artists thatallow them to refine, augment, and transform their crafts.YouTube has become the third most visited website in the world (Alexa, 2011) – behindGoogle and Facebook1. Since its creation in February, 2005, YouTube saw rapid growth;sixteen months after its creation, 100 million clips were being viewed per day (comScore,2006). In October 2008, the site attracted 100 million American viewers a day, estimated to beover two thirds of the internet users in the United States (comScore, 2008).This article explores how YouTube users have developed a community in which technologyhas enabled new kinds of musical creativity. In other words, since YouTube is a technologythat challenges the way we perceive music, musician and audience (Thibeault, 2009), thesephenomena deserve to be studied and understood within music performance and education.The first section of this article will examine literature about the interplay between art andtechnology, the relationship between technology and music education, and the diverseapproaches toward research regarding YouTube. The second section presents some of thefindings from an in depth case study of YouTube musician Wade Johnston and thecommunity of his YouTube channel 1. The final portion of this article will include discussionand conclusion that connect the observations and data of the research with previous literature;also ideas for future research and implications for music performance will be suggested.

Cayari: The YouTube Effect3Reviewing Research Connecting Education, Technology, Media, and YouTubeWholly new content will emerge from being digital, as will new players, new economicmodels, and a likely cottage industry of information and entertainment providers.(Negroponte, 1995, p. 18)Technology affects the way people create, consume, and share art, media, and performance.Benjamin (1937/1968) discussed how art forms changed through the use of mechanicreproduction, allowing the mass production and consumption of artwork. Benjamin claimsthat an original artwork has an “aura”; this means it is unique in time, space, and beauty. Henoted that man-made art has always been reproducible, and argued that each reproductionstrips the original art of its aura. Even though Benjamin’s view on art without an aura iscomplex, he noted that mass reproduction allowed art to be accessible to the masses. It alsoallowed for art to be edited like the piecing together of a film.Since the digital revolution, the masses have been able to view or listen to digitalized artworkfrom a drive and on the internet, making it even easier for the consumption art. Jenkins (2006)makes the distinction between media, what we see or hear, and technology, the way media isproduced and consumed. In Figure 1, a variety of media are identified by their art form as wellas the technology that is utilized to create or display it.MediacoinsphotographyArt formvisualvisualoratorio, symphony(etc)performing/ auraldigital sound (mp3,wav, etc)performing/ auralfilmstory telling/performing/aural/ visualstory telling/performing/aural/ visualdigital video (mov,mp4, etc)Technologymoldscamera/negatives/ digitalcamerasound recorder/phonograph/record/ tape/ CDdigital soundrecorder &player/ soundediting softwarevideo camera/film/ DVDdigital camera/video editingsoftware/ digitalviewing device(TV, computer,etc)Figure 1: Forms of Media, Art, & Technology

IJEA Vol. 12 No. 6 - http://www.ijea.org/v12n6/4Though this table is not an exhaustive list, one can see how modern media includes more artforms than its predecessors. Coins and photography are visual art media. They both could beused to display important figures such as famous people, places, and things. What changedwas the technology that produced visual art. In the past, aural and performing arts such as theoratorio, symphony, and sacred mass had to be live. That media was eventually recorded bysound recorders and heard through phonograph cylinders, records, tapes, and compact discs(CDs). In the digital age, the same art form and media can be created and consumed via digitalsound recorder and players. The sound film contained aspects of storytelling, performing,aural, and visual arts. Technological evolution brings the film to digital video allowing thesame art to be created and consumed on a computer.Katz (2004) argued that the phonograph was the first technology that drastically changed theway people consume, create, and distribute music. The phonograph was a widespreadmechanism that allowed for the recording and playback of music. Katz called the process inwhich technological advances have changed the music industry a “phonograph effect” (p. 4).The emergence of the digital era and the invention of the internet brought about a newphonograph effect. In the digital era, Negroponte (1995) discussed how media had changedfrom a passive form into a more interactive form; Negroponte postulated that combiningmedia would be the new trend of technology as society entered the new millennium; thesenew multimedia forms would allow users to have more control over their consumption ofinformation and media. Jenkins (2006) furthered this claim by explaining how mediacompanies were encouraging consumers to interact more by converging multiple media. Thisinteractive culture created on the internet had made a social link between people who havenever met face to face. These new technologies have enabled the internet to become aninteractive media technology. These new media allow art to take on a new form while thesenew technologies allow art to be consumed, created, and shared like never before.In response to these advances, Thibeault (in press) notes the gradual media and technologicalchange over the past one hundred years have resulted in what he characterizes as apostperformance world. He notes that recording and face-to-face live performance accountsfor only a small percentage of one’s musical experience. The ideas of music, musician, andaudience have been changed. Thibeault encourages educators to continue to hold liveperformance in high regard; however, because of the transformation and availability ofresources, educators should teach students about media and technologies that aid in thecreation and consumption of music.

Cayari: The YouTube Effect5Technology’s Affect on Amateur Music Making and Educators’ ResponsesThibeault’s optimism was not always shared by his predecessors. Since humanity has beenable to capture sound and mechanically reproduce sound, various cultures have beeninundated with high quality musical recordings. At the beginning of the twentieth century,Sousa (1906) predicted that recordings would kill the amateur musician. Green (2002)suggested that the majority of people are “alienated from music-making activities” (p. 3).Many non-musicians have an elitist view of performers who are often well trained, wellrehearsed, and required to be technically precise and creative (Bailey & Davidson, 2005).Richards and Durrant (2003) suggest that many ‘ordinary’ people are intimidated by musicmaking because they feel threatened by their solo voice being heard. Some music therapistshave found that this fear, perhaps caused by the quality of recorded music, inhibits parentsfrom singing to their children (Bunt, 1994). Through studying why people choose to be a partof a community chorus, Richards and Durrant (2003) reviewed a number of studies that showhow the commercialization, increased professionalism, and specialization of musicalperformance actually discourages people from believing that they are able to make music andperform successfully.In efforts to counteract the declining numbers of amateur music making, some musiceducators find ways to link popular music making to the classroom. Green (2005) presentedobservations and data collected from a pilot study that allowed students to bring in music oftheir choice to a music class, form friendship groups, and create their own rendition of a song.These informal learning techniques were also developed into a curriculum and usedexperimentally in a number of English schools (Green, 2008). The projects that Green (2005,2008) described focus on putting the learner at the center of the education and discussed thebenefits of the inclusion of informal learning in the traditional classroom. Studentsappreciated freedom in their education, and their choices resulted in confidence of musicalabilities. Green (2002) suggested that there is a natural continuum of informally learningmusic. This continuum includes memorizing, copying, jamming, embellishing, improvising,arranging and composing. Green’s continuum can be experienced through consumption andcreation on YouTube, and will be discussed more in depth in the third portion of this article.Informal learning practices have also been researched in other artistic venues. Jenkins (2006)presented his case studies on writers who have been changed through the use of fan fictionsites and blogs. Jenkins described that children and adults interacted together in fancommunities. Informal learning occurred through encouraging, tutoring, and sharing as wellas editing each others’ works. Technology has opened up doors that lead to skill developmentwhere these possibilities were never even considered decades earlier. Similar to these fanfiction sites, YouTube contains a myriad of videos that allow a viewer to learn informallythrough watching songs or lessons.

IJEA Vol. 12 No. 6 - http://www.ijea.org/v12n6/6In the classroom, technology allows educators to incorporate innovative ideas into theircurriculum. It is fitting for educators to find technologies that make their jobs more efficientand making their student’s learning more engaging. Many cultures seem to have turned intointernet based societies with people who are stimulated by the screen. Computer andtelevision screens entice today’s youth culture. These technologies also use text to captureaudience attention. Blogs and prose are readily available to anyone who cares to access them.In higher education, professors are teaching undergraduate music education students how todevelop projects that center around how to use technology effectively and not technologyprograms and software. Greher (2006) has designed projects that focus on self-explorationwhile giving students strategies for applying technology in their future classroom; Thibeault(2009) has created projects that focus on inter-departmental collaborations, creating resourcesfor the profession through the public domain and creative commons, and providing studentswith future classroom ideas; Webb (2007) has explored the potential of cross-media listeningin the music classroom and how including visual stimulation enhances the listeningexperience. These visual enhancements expand media and musical understanding throughaural and visual analyses. Juhasz (2008) created a “virtual classroom” that was conductedalmost exclusively on YouTube. Juhasz admits that teaching a class based on YouTube was adifficult task, but it did allow students to learn how to use the medium. Juhasz acknowledgedthat having a class about YouTube on YouTube was not as successful as originallyanticipated. The proper technology and curriculum is essential to the successful convergenceand incorporation between classroom and technology.Web 2.0: Technology Creates Interactive MediaAs many of the above authors suggest, the users of technol

forms than its predecessors. Coins and photography are visual art media. They both could be used to display important figures such as famous people, places, and things. What changed was the technology that produced visual art. In the past, aural and performing arts such as the oratorio, symphony, and sacred mass had to be live. That media was eventually recorded by

Creating a Journal in UCF Financials