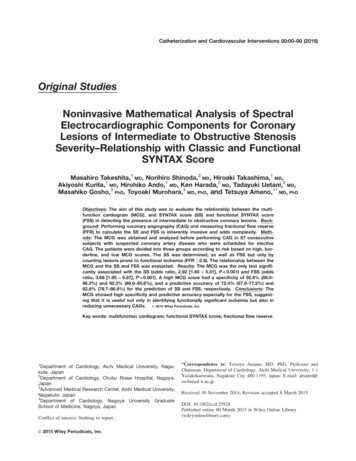 2Takeshita et al.INTRODUCTIONThe synergy between percutaneous coronary intervention with taxus and cardiac surgery (SYNTAX)score (SS) is an anatomic scoring system based thecoronary angiographic (CAG) findings, which not onlyquantifies lesion complexity but also predicts adverseevents after percutaneous coronary intervention (PCI)[1–4]. The potential benefit of revascularizationdepends on the presence of myocardial ischemia; therefore, careful identification of ischemia-inducing stenosis allows for a greater benefit from revascularization[5–10]. Hence, a recent study demonstrated the superiority of a functional SS (FSS), a fractional flow reserve(FFR)-guided SS, to a classic SS regarding the predictive value of clinical outcome in patients with multivessel coronary artery disease (CAD) who underwentPCI [11]. However, these scores have several inherentlimitations because they are obtained using invasivemodalities such as CAG and FFR.The multifunction cardiogram (MCG) is a newcomputer-enhanced, multiphase, resting electrocardiographic (ECG) analysis device that improves the quality of noninvasive tests. It has been used to determinethe optimal decision-making algorithm for the evaluation of suspected obstructive CAD [12–14]. Recently,we reported the association between noninvasive MCGand classic coronary lesion scores [15]. However, theprognostic impact of the reference for ischemia in ourprevious study has not been established in contrastwith SS and FSS.The aim of this study, therefore, was to evaluate theaccuracy of the MCG in relation to the SS and FSS ina relatively high-risk population who were scheduledfor elective CAG, taking into account standard ECGand Framingham risk scores (FRSs).METHODSPatients and Study DesignThis prospective study was designed to evaluate theaccuracy of the MCG in diagnosing CAD patients withrelevant ischemia as defined by classic SS and FSS reference standards. Our target population consisted of103 consecutive subjects with or without known CADwho were scheduled for elective CAG between October 2012 and December 2013. Thirteen patients withno significant coronary lesion ( 50%) in any of thethree coronary trees on CAG and 3 patients with poorquality MCG results were excluded, leaving 87 patientsfor the evaluation. This study was approved by theinstitutional review board at Chubu Rosai Hospital; allthe patients provided written informed consent, and thestudy complied with the principles of the Declarationof Helsinki. (Clinical Trial Registration–UMIN ID:000009992).Multifunctional CardiogramThe MCG test was performed and analyzed beforeperforming CAG. The angiographers were blinded to thetest results. The MCG (Toray Medical) and associatedcomputer with the MCG version 2.1.1 software (PremierHeart Japan) were used. An ECG was performed withleads II and V5 for 82 sec, and 3–5 tests were performedat each session. Only those tests with a marginal or better quality trace, which was checked automatically bythe system, were sent for analysis to the PH LLC datacenter via the Internet. The MCG device and databaseused were previously described [16]. In brief, the database against which the incoming MCG data were compared originated from data-gathering trials conductedfrom 1978 to 2000 in more than 30 institutions inEurope, Asia, and North America, among "100,000individuals of varying ages and degrees of coronary disease. The MCG reports also indicate the level of myocardial damage and severity integrated into a score; otherinformation such as coronary damage, area of damage,and myocardial pathological and pathophysiological conditions are included in the report. An MCG score of 4was used as the cutoff score in most published clinicaltrials [12,17]. In this study, we used the cut-off score of4 but investigated the scoring method further. Thepatients were divided into three groups as follows: highMCG score, minimum MCG score of # 4.0 per sessionamong the 3-5 tests; borderline MCG score, 4.0 allscores # 3.0; low MCG score, maximum score of 3.0per session among the 3–5 tests.CAG and Measurements of SS and FSSBefore performing CAG, an intracoronary injectionof 0.5 mg isosorbide dinitrate was administered to prevent coronary spasms. Cineangiograms were analyzedby an independent angiographer who was blinded tothe MCG test results. The SS and FSS for each patientwas calculated by 2 independent interventional cardiologists (M.T. and N.S.) to assess interobserver variability. The lesion selected for this calculation were thoseproducing # 50% diameter stenosis in vessels # 1.5 mmaccording to visual estimation from the baseline diagnostic CAG and scored separately using the SS scorealgorithm from its website. FSS was calculated by separately adding the individual scores of lesions with anactual FFR value ! 0.80 and ignoring lesions with FFRvalues 0.80 [11]. FFR was calculated as previouslydescribed [5,9,10]. In brief, equalization was performedwith the guide wire sensor positioned at the guidingcatheter tip. The 0.014-in pressure guide wire (St. JudeCatheterization and Cardiovascular Interventions DOI 10.1002/ccd.Published on behalf of The Society for Cardiovascular Angiography and Interventions (SCAI).

4Takeshita et al.Fig. 1. The SS and FSS according to increasing risks basedon the MCG scores. The SS in A and FSS in B were significantly associated with an increasing risk of the MCG score(ANOVA, P 5 0.001 and ANOVA, P 0.001). The SS and FSS forthe individual low, borderline, and high MCG scores were8.8 6 6.1 and 5.1 6 6.0, 10.9 6 7.0, and 7.0 6 7.9, and 17.2 6 9.7and 15.4 6 10.0, respectively. SS: SYNTAX score; FSS: functional SYNTAX score; MCG: multifunction cardiogram; ANOVA:analysis of variance.were deferred when vessels had obvious severe lesions( 99%) with a delayed coronary flow or had no significant stenosis ( 50%) as observed on CAG.ratio (OR) was calculated by applying a cumulativelogit regression model on each of the three tests. Wealso conducted a logistic regression analysis to estimatethe OR for the need for revascularization. The AkaikeInformation Criterion was used to compare the goodness of fit between the three models [19,20]. Dichotomized data were used to calculate the accuracy,sensitivity, specificity, and positive (PPV) and negativepredictive values (NPV), with their 95% confidentialintervals (CIs). Agreement between the SS and FSS,and the three tests was evaluated by using Cohen’skappa coefficient. Sensitivity was calculated by dividing the number of patients with positive test resultsand high SS and FSS (considered as a true positive) bythe total number of patients with high SS and FSS.Specificity was calculated by dividing the number ofpatients with a negative test results and patients withlow to intermediate SS and FSS (considered as a truenegative) by the total number of patients with low tointermediate SS and FSS. We constructed receiveroperating curve (ROC) plots to determine the best cutoff MCG scores for the prediction of high SS and FSS.Three MCG score groups (low, borderline, and high)were evaluated using analysis of variance (ANOVA),and Fisher least significant difference test for multiple comparisons to determine their associations withthe SS and FSS. A P 0.05 was considered statistically significant. All statistical analyses were performed using the SAS 9.3 software (SAS institute,Cary).Definition of Clinical CharacteristicsDiabetes mellitus was defined as the patient was takingany antihyperglycemic medication or had previously beendiagnosed with diabetes mellitus. Hypertensive patientswere those with documented blood pressure 140/90 mm Hg on two or more occasions, or who were already on antihypertensive therapy. A positive smokingstatus was defined as the patient currently smoking orhad quit less than a year before entering the study.Chronic kidney disease stages were defined according toestimated glomerular filtration rate levels [18].STATISTICAL ANALYSESOn clinical, angiographic, and diagnostic characteristics, variables were stratified according to SS tertiles,and three groups of FSS were divided by the same cutoff score based on SS tertiles. Categorical data weresummarized as frequency (%) and continuous datawere expressed as mean and standard deviation, or median and interquartile range as appropriate. The reproducibility of SYNTAX scoring was evaluated bycalculating interobserver reliability using intraclass correlation. For evaluating the relationship between the ischemia level and three tests as predictors, the oddsCatheterization and Cardiovascular Interventions DOI 10.1002/ccd.Published on behalf of The Society for Cardiovascular Angiography and Interventions (SCAI).

6Takeshita et al.Fig. 3. Representative images of CAG from the patient whoshowed no resting ECG abnormality with functional ischemiain A and without functional ischemia in B. The resting ECG ofboth patient A and patient B showed no abnormality. The average MCG score of patient A was 5.0 and the multivesseldisease was found on CAG. The SS and FSS of patient A were26 and 19, respectively. The average MCG score of patient Bwas 0.0, and no significant stenosis was found on CAG. TheSS and FSS of patient B were 15 and 0, respectively. CAG:coronary angiography; ECG: electrocardiography, MCG: multifunction cardiogram; SS: SYNTAX score; FSS: functional SYNTAX score.Catheterization and Cardiovascular Interventions DOI 10.1002/ccd.Published on behalf of The Society for Cardiovascular Angiography and Interventions (SCAI).

Relationship of MCG to Functional SSTABLE III.7Predictive value of the SS and FSS measured using the MCG, ECG, and FRSTestKappa coefficient(95%CI)Classic SYNTAX scoreMCG0.35(H vs. B/L)(0.16–0.55)ECG0.14(P vs. N)(&0.06–0.33)FRS0.02(H vs. I/L)(&0.16–0.21)Functional SYNTAX scoreMCG0.51(H vs. B/L)(0.29–0.72)ECG0.18(P vs. N)(&0.05–0.41)FRS0.01(H vs. I/L)(&0.14–0.17)P value0.140.0020.017 )SS: SYNTAX score; FSS: functional SYNTAX score; OR: odds ratio; AIC: Akaike information criterion; MCG: multifunction cardiogram; ECG:electrocardiogram; FRS: Framingham risk score.92.3% (89.0–95.6%), and relatively high NPVs of71.4% (66.0–76.8%) and 85.7% (81.5–89.9%) for theprediction of high SS and FSS, respectively. The MCGshowed a predictive accuracy of 72.4% (67.6–77.2%)for SS and 82.8% (78.7–86.8%) for FSS. The areasunder the ROC curve (AUC) for the MCG scores inthe prediction of high SS and FSS were 0.69 (0.58–0.77) and 0.76 (0.65–0.84), and the optimal cutoffvalue identified though the ROC analysis was 4.4 and4.8, with a sensitivity of 48.5 and 59.1%, respectively,and a specificity of 85.2 and 89.2%, respectively (Fig.2). Figure 3 shows the representative images of CAGfrom the patient who showed no resting ECG abnormality with functional ischemia in A and without functional ischemia in B. The average MCG score ofpatient A was 5.0 and the multivessel disease wasfound on CAG. The SS and FSS of this patient were26 and 19, respectively. The average MCG score ofpatient B was 0.0, and no significant stenosis wasfound on CAG. The SS and FSS of this patient were15 and 0, respectively.DISCUSSIONThe major findings in this study are that the MCGscore was significantly associated with not only the SSbut also the FSS in a relatively high-risk populationwith or without known CAD. Furthermore, the highMCG scores showed relatively high predictive accuracy for high FSS. These findings could have significant clinical implications on the improvement ofnoninvasive diagnosis tests in terms of the diagnosis ofrelevant ischemic heart disease.Recently the SS, which is based on coronary anatomy and lesion characteristics, was introduced to quan-tify lesion complexity and to predict clinical outcomesafter PCI in patients with multivessel CAD [1–4].However, the potential benefit of revascularizationdepends on the presence of myocardial ischemia; therefore, careful identification of ischemia-inducing stenosisallows for a greater benefit from revascularization, especially in patients with stable angina pectoris [5–10]. Inthis regard, the FSS, which is the modified SS aftercounting only lesions prone to ischemia withFFR ! 0.80, has been advocated regarding decisionmaking in the choice of revascularization strategies [11].Nevertheless, performing CAG and measuring FFR tocalculate the SS and FSS is inherently invasive andadds complexity. Hence, in the clinical setting, manyunnecessary CAGs are often performed, resulting inincreased risks of safety and economic problems. Meanwhile, the MCG has been studied as an innovative computational electrophysiological signal analysis tool forthe noninvasive diagnosis of relevant ischemia [12–15].In the present study, we related the relatively high accuracy of the MCG to the FSS, therefore providing an alternative for contemporary noninvasive diagnosticmodalities for the detection of relevant ischemia as agatekeeper for CAG, especially in patients who are notable to perform exercise and have low kidney function.In this study, the SSs and FSSs were significantlyassociated with an increasing from the low- andborderline-risk groups to the high-risk group based onMCG scores. This difference seemed to be greater forthe FSS compared with the SS. In addition, the predictive accuracy of the MCG also tended to be higher forthe FSS (82.8%) compared with the SS (72.4%). Theinformation provided by the MCG indicates the levelof myocardial damage and other information such ascoronary damage, area of damage, and myocardialCatheterization and Cardiovascular Interventions DOI 10.1002/ccd.Published on behalf of The Society for Cardiovascular Angiography and Interventions (SCAI).

The synergy between percutaneous coronary inter-vention with taxus and cardiac surgery (SYNTAX) score (SS) is an anatomic scoring system based the . (St. Jude 2 Takeshita et al. Catheterization and Cardiovascular Interventions DOI 10.1002/ccd. Published on behalf of The Society for Cardiovascular Angiography and Interventions (SCAI).

HIGHLIGHTS OF PRESCRIBING INFORMATION -agonist: Do

This is Your Presentation Title . - UCF Financials