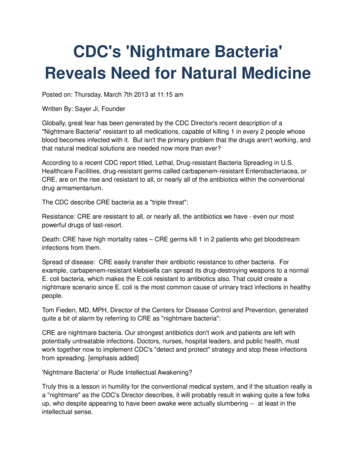 CDC's 'Nightmare Bacteria'Reveals Need for Natural MedicinePosted on: Thursday, March 7th 2013 at 11:15 amWritten By: Sayer Ji, FounderGlobally, great fear has been generated by the CDC Director's recent description of a"Nightmare Bacteria" resistant to all medications, capable of killing 1 in every 2 people whoseblood becomes infected with it. But isn't the primary problem that the drugs aren't working, andthat natural medical solutions are needed now more than ever?According to a recent CDC report titled, Lethal, Drug-resistant Bacteria Spreading in U.S.Healthcare Facilities, drug-resistant germs called carbapenem-resistant Enterobacteriacea, orCRE, are on the rise and resistant to all, or nearly all of the antibiotics within the conventionaldrug armamentarium.The CDC describe CRE bacteria as a "triple threat":Resistance: CRE are resistant to all, or nearly all, the antibiotics we have - even our mostpowerful drugs of last-resort.Death: CRE have high mortality rates – CRE germs kill 1 in 2 patients who get bloodstreaminfections from them.Spread of disease: CRE easily transfer their antibiotic resistance to other bacteria. Forexample, carbapenem-resistant klebsiella can spread its drug-destroying weapons to a normalE. coli bacteria, which makes the E.coli resistant to antibiotics also. That could create anightmare scenario since E. coli is the most common cause of urinary tract infections in healthypeople.Tom Fieden, MD, MPH, Director of the Centers for Disease Control and Prevention, generatedquite a bit of alarm by referring to CRE as "nightmare bacteria":CRE are nightmare bacteria. Our strongest antibiotics don't work and patients are left withpotentially untreatable infections. Doctors, nurses, hospital leaders, and public health, mustwork together now to implement CDC's "detect and protect" strategy and stop these infectionsfrom spreading. [emphasis added]'Nightmare Bacteria' or Rude Intellectual Awakening?Truly this is a lesson in humility for the conventional medical system, and if the situation really isa "nightmare" as the CDC's Director describes, it will probably result in waking quite a few folksup, who despite appearing to have been awake were actually slumbering -- at least in theintellectual sense.

Drug resistance – an increasingly prevalent phenomena, whether we are talking about infectionor cancer – is proving to the world that, except for emergency medicine and other rareexceptions, the drugs really don't work as advertised – at least not if the goal is to save lives.Suppressing or "treating" symptoms often results in turning acute health conditions into chronicones, compounded by the subsequent poisoning by a battery xenobiotic (foreign to our biology)medications.The fact that the majority of the drugs used as part of the conventional medical standard of careare xenobiotic petrochemical derivatives rarely gets acknowledged. Folks are being massively,collaterally poisoned in the war against germs and symptoms, and it is the "pathogens" and"diseases" that are being blamed and not our misguided effort to use poisons to fight conditions,most of which, if not being caused by poisoning or nutrient deficiencies and incompatibilities, areat least major contributing factors to them.Declaring Chemical War Against Bacteria Blows BackThe "last resort" antibiotics known as Carbapenems are in a class of β-lactam antibiotics, themost widely used group of antibiotics, which target bacterial organisms by inhibiting cell wallbiosynthesis. This drug class was originally developed from thienamycin, a naturally derivedproduct of Steptomyces cattleya. So, the inspiration behind it, like for most other classes ofpharmaceuticals in existence today, was Nature. But, Nature equips her creations equally withdefenses in the ongoing struggle for balance among species. Bacteria are increasingly resistantto Carbapenems, producing an enzyme called beta-lactamase (more specifically, mettalo-betalactamase-1 (NDM-1)), which attacks the β-lactam ring within β-lactam antibiotics, reducing theirantibacterial effect. The antibiotic resistant gene for NDM-1 is capable of being transferringhorizontally between different bacteria, so it is spreading widely. Since NDM-1's first discovery ina Swedish patient of Indian origin in 2008, it has been detected throughout the world incountries such as Pakistan, India, Japan, Brazil, and the UK, US and Canada.The CDC, and the conventional drug-based medical establishment it represents, is learning thatchemical warfare against "germs" not only has severe limitations. In fact, it is actually creatingeven stronger, more resistant bacteria. MRSA, for instance, that terrible bogeyman of aninfection, is an acronym for Methicillin-Resistant Staphyloccous Aeurus. It actually emergedwithin the context of the overuse of methicillin and other penicillin-type antibiotics; meaning, itexists not despite of antibiotics, but because of them.Bacteria are far more resilient than multicellular organisms such as us. We consider ourselvesmuch "higher" on the evolutionary ladder, but many strains have actually evolved capabilitiesthat we do not have, such as degrading pesticides and chemicals like BPA for us. In fact, someunicellular organisms have even developed ways to use deadly radioactive waste (uranium-238)as an energy source! When we expose ourselves to chemotherapy (yes, antibiotics arechemical therapies), the subpopulation within that bacterial colony that are resistant to thesechemicals actually thrive, as competing organisms have been destroyed, and our own bacterialmediated (probiotic) immune defenses decimated.

Even when you kill 99.99% of an infection, the .001% that develops resistance becomes severalorders of magnitude more resistant to the original chemical that it survived. With time it willcome back with a vengeance, assuming the predisposing factors associated with infectiousdisease susceptibility, e.g. nutrition, chemical exposures, stress, have not been rectified. Also,the chemicals themselves produce selective pressure upon the bacterial colonies, generatingnew strains of bacteria capable of overcoming chemical annihilation by expressing multidrugresistance genes.The end result? Massive collateral damage: destruction of our largely probiotic-mediated innateand adaptive immune response to infection, chemical poisoning of the host, and the productionof "super germs" within the bioreactor of the human alimentary canal. This is very similar towhat happens with chemotherapy/radiotherapy cancer resistance, cancer expressing genes andbehaviors that are pre-metazoan in quality, not unlike bacteria and bacterial colonies [see PaulDavies, Charles Lineweaver's Metazoa 1.0: taping the genes of ancient ancestors].Drug-Based Medicine Humbly Bows to the EarthWidespread drug resistance marks the end of a certain type of cavalier, medical hubris, and thestart of authentic humility within the medical culture. Not only is the conventional medicalestablishment throwing up their hands in surrender against the "simplest" of organisms – germs– but they are being forced to return to Nature for instruction.The word humility comes from the word humus, or "earth," and indeed, it is the earth whichteaches us how to maintain our health. Take a recent study published in the Korean Journal ofPhysiology and Pharmacology titled, Anti-inflammatory and anti-superbacterial activity ofpolyphenols isolated from black raspberry, which found that the root of the black raspberry plantcontains polyphenols which are lethal to methicillin-resistant Staphylococcus aureus (MRSA),carbapenem-resistant Acinetobacter baumannii (CRAB), and Bacillus anthracis (Anthrax). Theblack raspberry fruit did not exhibit these properties.Why the root and not the fruit? The reason is that plants have actually designed their fruits to beeaten by specific species, and therefore are not as well armed against the same microbial threatthat we humans also face interacting with the wild environment. Roots, on the other hand, aredesigned to enter directly into the soil, and derive nutrients directly through rhizomal interaction,which requires both a certain degree of permeability, and therefore extra chemical defenses. Wediscovered a similar process at play in the production of the defensive lectin compound in wheatknown as wheat germ agglutinin (WGA) within the root tip and leaf tip of the sprouting wheatberry. WGA also has antibacterial, antifungal, anti-mammal, and yes, anti-animal/humanproperties as well.So, if the humble raspberry plant can produce antibacterial compounds capable of killingcarbapenem-resistant Acinetobacter, could it also kill the CDC's nightmare pathogen,carbapenem-resistant Enterobacteriaceae? Since both bacteria are members of the classGammaproteobacteria in the phylum Proteobacteria, it is definitely possible.Basic Foods and Spices Found To Kill "Super Germs"

·Mango Seed·Mangosteen·Manuka Honey·Nigella sativa (black seed)·Norway spruce·Olive leaf extract·Tabebuia·Peppermint·Prickly Ash·Resins·Sage·Sandalwood·Silver (nanoparticles)·Tea Tree·ThymeYou can view all of these study abstracts without registering at GreenMedInfo.com's MRSAresearch page.Other examples of so-called "nightmare" bacteria, which natural compounds have been found tokill, include:·Multi-drug Resistant Tuberculosis (billed by the media as "The White Plague"): A 2011study found that garlic has is able to kill this particularly resilient mycobacteria.[i]·Drug-resistant Urinary Tract Infections: A 2005 study found that grapefruit seeds werecapable of reversing multi-drug resistant Pseudomonas aerginosa urinary infection after twoweeks of treatment in a male patient.[ii] Cranberry also appears to reduce the risk of urinarytract infections by inhibiting the biofilm formation typical of antibiotic resistant uropathogenicbacteria colonies.[iii]·Drug-resistant Infected Nipple (Lactation): A 2010 study found that probiotics strains frombreast milk are superior to antibiotics in the treatment of infectious mastitis.[iv]·Drug-resistant Helicobacter pylori: A 2002 study found that the organosulfor compound inCruciferous vegetables inhibits extracellular, intracellular and antibiotic-resistant strains of H.pylori, as well as preventing petrochemically-induced stomach tumors.[v]

Reveals Need for Natural Medicine. Posted on: Thursday, March 7th 2013 at 11:15 am . Written By: Sayer Ji, Founder . Globally, great fear has been generated by the CDC Director's recent description of a "Nightmare Bacteria" resistant to all medications, capable of killing

BOARD OF DIRECTORS - MINUTES - California DECA