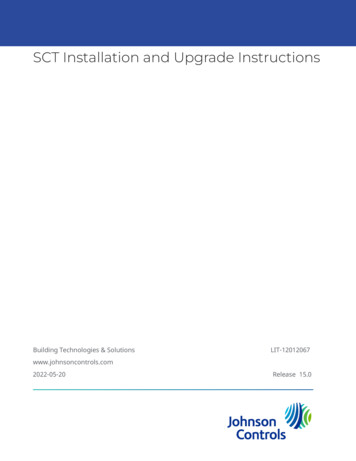 Document introductionThis document describes how to install and upgrade the System Configuration Tool (SCT) softwareon a desktop or server-class computer.Summary of changesThe following information is new or revised for SCT Release 15.0: Updated SQL Server Software requirements. Updated Operating system requirements. Replaced references to Metasys UI Offline with Johnson Controls System Configuration Tool(JCT) throughout this document, because this tool is rebranded. Removed references to the Open Data Server (ODS) because the latest available version of theODS is Release 10.1. The ODS is not available for upgrade to Metasys Release 12.0. Updated Upgrading from SCT Release 13.2 or later to Release 15.0 software to include a notethat you must upgrade SCT and server products to the same version on a unified server. Removed problems related to Windows 7 and Windows 8 from Troubleshooting because theseWindows versions are no longer supported. Updated Troubleshooting to document an issue about the upgrade of an SCT archive. Updated Troubleshooting to document an issue where it is not possible to download legacyarchives with SCT. Updated Troubleshooting to include a workaround for an issue where appsetting keys are notpersisted after an uninstall. Updated the document throughout to be generic so that the document applies to bothMetasys and Facility Explorer (FX).Getting startedThe SCT setup is a comprehensive utility that includes and installs several Microsoft Windows components and products. The following table outlines the components and products that theSystem Configuration Tool Setup installs.Table 1: Components installed by the System Configuration Tool setupWindows Components InstalledProducts InstalledMicrosoft Internet Information Services (IIS)Microsoft .NET Framework 4.7.2 and 3.5.1Microsoft Visual C Runtime LibrariesMicrosoft Message Queuing (MSMQ)Microsoft SQL Server 2017 Express with CU17 Desktop Operating Systems only. Only installs ifno version of SQL Server is detected.System Configuration Tool 15.0SCT Pro 15.0Johnson Controls System Configuration Tool(JCT) 6.0Launcher 2.0Software Manager 3.0Engine ImporterPackage ImporterSCT Installation and Upgrade Instructions5

Related documentationThe following table provides a list of documents related to SCT software installation.Table 2: SCT installation and upgrade related documentationFor information aboutDocument referenceUnderstanding the Metasys systemMetasys System Configuration Guide(LIT-12011832)Installing and upgrading the Application andMetasys Server Installation and UpgradeData Server (ADS) and Extended Application and Instructions (LIT-12012162)Data Server (ADX) on the SCT ComputerInstalling and upgrading ADS-Lite on the SCTComputerMetasys Server Lite Installation and Upgrade Guide(LIT-12012258)Details for installing and upgrading SQL ServersoftwareSQL Server Installation and Upgrade Guide(LIT-12012240)How to install the Open Application Server (OAS) Open Application Server (OAS) Installation Guide(LIT-12013222)Using the LauncherLauncher Help (LIT-12011742)Knowing the features, benefits, andspecifications of SCTSystem Configuration Tool Catalog Page(LIT-1900198)Creating archive databases, integrating building SCT: System Configuration Tool Helpnetworks, and Auto Discovering Points(LIT-12011964)Understanding security risks on the networkNetwork and IT Guidance Technical Bulletin(LIT-12011279)Understanding JCTJohnson Controls System Configuration Tool (JCT)Help (LIT-12012116)Understanding SCT ProSCT Pro Help (LIT-12013035)Understanding the NAE Update Tool and theEngine Importer.NAE Update Tool Help (LIT-12011524)Licensing the SCT and field controller packages.Software Manager Help (LIT-12012389)Licensing SCT and field controller packages, thedaily use of the Facility Explorer system, anddatabase backup/restoreFacility Explorer Site Management Portal Help(LIT-12013520)Commissioning the SNCF4-SNC Commissioning Guide (LIT-12013549)SCT installation and upgrade overviewThe Windows operating system that you want to use for SCT software must have the correctcomponents installed. SCT software does not install or function properly if any of these componentsare missing. The SCT setup installs many of these prerequisites, but make sure you carefully reviewthe software requirements before installation. Follow the steps outlined in the Detailed proceduressection to ensure that the SCT successfully installs.If you have SCT Release 13.0 or earlier software, you must first uninstall it before you install SCTRelease 15.0. For details, refer to Uninstalling existing SCT release 13.0 or earlier software. Howeverif you have SCT Release 13.2 or later software, you can upgrade to SCT Release 15.0. For details,refer to Upgrading from SCT Release 13.2 or later to Release 15.0 software. If you install the SCTon a server and you do not have an earlier release of the SCT installed, first install, or verify that6SCT Installation and Upgrade Instructions

you have a supported version of Microsoft SQL Server software. If you install the SCT on a DesktopOperating Systems and you do not have a supported version of Microsoft SQL Server software,the SCT setup automatically installs Microsoft SQL Server Express. For details, see Verifying yourcomputer has a supported version of SQL Server software installed.You can install SCT Release 15.0 on a computer with a Metasys server that is at Metasys Release 9.0or later. Metasys servers include the ADS, ADX, and ADS-Lite. Do not install the SCT software on anOAS server. Some important installation rules to consider are: The SCT software and Trunk Utility features require license activation at Release 13.0 or later.Use the Software Manager to license the SCT and field controller packages. Install the softwaremanager through the SCT installation wizard. For more information on software licensing,refer to the Software Manager Help (LIT-12012389). You must uninstall any older stand-alone releases of the NAE/NIE Update Tool (NUT) beforeyou use the SCT setup to install SCT Release 15.0. You must uninstall SCT Release 13.0 or earlier software before installing SCT Release 15.0. Youmust apply any new OS or SQL service pack after you remove an older release of the SCT, butbefore you install a new release of the SCT. Do not install SCT and Metasys Server software on the same computer if more than 100network engines are to report to one ADX or ODS. If you have more than 100 engines on thesite, install the SCT on a separate computer. You can use SCT Release 15.0 to manage devices from Metasys Release 5.2 or later. The SCT nolonger requires the Site Director to be of an equivalent release version as the tool. Install SCT on a stand-alone computer when you use it with a split ADX system. Do not installSCT on the same computer as the web/application server or data server of a split ADX system.SCT installation and upgrade prerequisitesConsider the following before installing SCT: SCT software requires 8 GB minimum of available hard disk space. This requirement is toensure that enough room exists for future database storage used by SCT. The System Configuration Tool Setup installs Microsoft .NET Framework version 4.7.2 if it doesnot already exist on the computer. SCT Setup also installs .NET Framework version 3.5.1. To avoid any incompatibility issues, install SCT on a computer that does not have other nonMetasys applications that use IIS. You can use SCT to maintain a variety of release engines at Metasys Release 5.2 and later.The Site Director must be at an equivalent or greater release version than the highest versionengine. For example, if you have a Metasys Release 6.5 engine and a Metasys Release 5.2engine in your archive, your Site Director needs to be greater than or equal to Metasys Release6.5. For more information, refer to SCT: System Configuration Tool Help (LIT-12011964). The Ethernet network interface card (NIC) must have a valid connection status for theinstallation to complete successfully. Connect your Ethernet NIC to the powered-up Ethernethub, switch, or router or to a live Ethernet network. The initial logon user name for the SCT UI is MetasysSysAgent and is not case sensitive. Forthe MetasysSysAgent default password, contact your local Johnson Controls representative.For new SCT installations, change the logon account password to a valid, complex passwordwhen you log on for the first time. If the currently installed SCT is upgrade eligible, theMetasysSysAgent password is retained during the upgrade, so you are not promptedto change the password. For more information about passwords, refer to the SecurityAdministrator System Technical Bulletin (LIT-1201528).SCT Installation and Upgrade Instructions7

The NAE/NIE Update Tool is bundled with SCT. When you install SCT, the NAE/NIE Update Toolis also installed in the background. At SCT Release 13.0 or later, the tool is renamed to the NAEUpdate Tool. To launch the NAE Update Tool, navigate to Start Johnson Controls NAEUpdate Tool. The NAE Update Tool does not have a desktop icon and you cannot uninstall theNAE Update Tool without also uninstalling SCT. For SCT Release 14.0 or later, use SCT Pro in place of the NAE Update Tool because all of theNAE Update tool functions are available in SCT Pro. The SCT Pro includes some of the same functions as the NxE Information and ConfigurationTool (NCT). For NCT functions to work, open port 9910 (TCP) and port 9911 (UDP) on the SCTcomputer. For details about the NCT, refer to NxE Information and Configuration Tool TechnicalBulletin (LIT-1201990). For details about opening ports, see Opening ports and configuring theWindows firewall. The SCT and the NCT remain separately installed and maintained tools. To upload CAFs into the SCT archive, you no longer need to install CCT on the same computeras SCT. The CAF upload feature is only available for network engines at Release 6.0 or later. AtSCT Release 12.0 or later, you can use the Trunk utilities option to transfer CAFs to and fromthe SCT archive. If your computer has an older version of the NAE Update Tool, you cannot upgrade SCT untilyou uninstall the older version of the NAE Update Tool. The releases must match becausethe SCT and NAE Update Tool share the same code base for some upload and downloadoperations. The security database for the SCT application is not available after uninstalling and re-installingSCT. You must document the existing list of users and add them manually after you install thelatest release of the SCT. At SCT Release 14.1 and later, you require device package files, field controller package files,and Generic SA Bus packages to use all features in SCT. If you do not install device packages,you cannot add servers, supervisory devices, and field devices. Use the Software Manager,an application that is installed with SCT to license these package files after you download thepackage files from the license portal. You must import the package files before they can belicensed. Follow the steps in Licensing SCT and importing and licensing packages for SCT toimport and license all package files. For further information on software licensing, refer to theSoftware Manager Help (LIT-12012389). If you decide to move your IIS folder or files before you install SCT, please complete thefollowing steps:a. Choose a new location for C:\inetpub and copy the existing files from C:\inetpub tothe new location.b. Run the following command to change the Default Web Site physical site location to thenew inetpub location: %windir%\system32\inetsrv\appcmd set vdir "DefaultWeb Site/ -physicalPath:f:\inetpub\wwwroot replacing f:\inetpub\wwwrootwith the location you choose.c. Run the following command to update the IIS registry settings for the new location:reg add HKLM\Software\Microsoft\inetstp /v PathWWWRoot /t REG SZ /df:\inetpub\wwwroot replacing f:\inetpub\wwwroot with the location you choose.Note: Refer to Microsoft documentation for further information about moving your IISsite.8SCT Installation and Upgrade Instructions

SCT Release 12.0 or later, you can use the Trunk utilities option to transfer CAFs to and from the SCT archive. If your computer has an older version of the NAE Update Tool, you cannot upgrade SCT

An Assessment Framework for the Community College v1.0