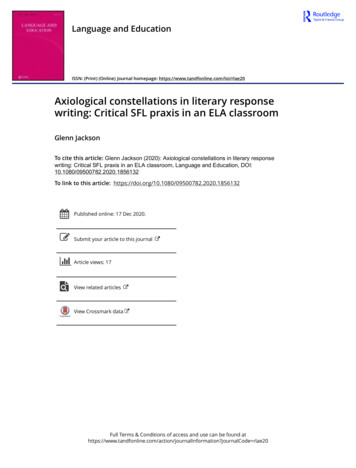 Language and 6132Axiological constellations in literary response writing:Critical SFL praxis in an ELA classroomGlenn JacksonBarrow County School System/University of Georgia, Athens, GA, USAABSTRACTTo engage in critical praxis, teachers of literary response writing needconcepts and methods for understanding the efficacy of teaching practices in helping students develop particular dispositions towards textsand the social issues they represent. In this article, the author uses concepts from Legitimation Code Theory (LCT) and Systemic FunctionalLinguistics (SFL) to reveal the value positions constructed by 8th gradeEnglish language arts (ELA) students in essays produced in a criticalliterary analysis unit. After reading excerpts from two Harry Potter novels, students compared the main characters’ views on elvish enslavement as evidenced by the passages. This study uses axiologicalconstellation analysis to explore the language choices in essays thatconstructed contrasting stances towards Harry’s character and the representation of elvish enslavement in the texts. The study contributesto understanding how values are constructed in literary response writing and how these relate to broader sociopolitical discourses, withimplications for critical praxis in subject English education.ARTICLE HISTORYReceived 14 January 2020Accepted 21 November2020KEYWORDSSubject English; Englishlanguage arts; literaryresponse; student writing;discourse analysis;Legitimation Code Theory;Systemic FunctionalLinguisticsDominant discourses in the southeastern United States tend to rationalize the historicalenslavement of African Americans and downplay the lasting injustices that are its legacy.These discourses are visible in local monuments that memorialize enslavers and segregationists from history. For example, the name of the school in which this study takes placeis a tribute to a Senator who obstructed national civil rights legislation for decades. As aresponse to this endemic rationalization of slavery in this context, this case study describesstudent writing from a curricular unit that introduced students in an 8th grade EnglishLanguage Arts classroom to concepts from Systemic Functional Linguistics (SFL) as a meansfor critically analyzing two passages from the Harry Potter novel series. The classroomanalysis of the texts was based on Simmons’ (2012, 2016) model of critical literary analysis,which highlighted the problematic ways that the text normalizes Harry’s role in and attitudetowards elvish enslavement. The unit sought to help students critique the representation ofenslavement in the two Harry Potter passages as a means for disrupting dominant discoursesaround related issues in our social and historical context.To investigate ways that students negotiated this critical stance towards the representationof enslavement in the literary texts, Doran’s (2020) method of axiological constellationCONTACT Glenn [email protected] Hall, 110 Carlton Street, Athens 30602, GA , USA 2020 Informa UK Limited, trading as Taylor & Francis GroupBarrow County School System/University of Georgia, 315

2G. JACKSONanalysis was used to analyze the value positions constructed in the student writing. Analyzingthe axiological constellations, or networks of value-laden meanings, in the student responsesoffers insights into the ways students negotiated the critical stance intended by the curricularunit. This analysis functioned as a reflective activity as we engaged in our critical SFL praxis(Harman 2018; Troyan, Harman, and Zhang 2020), informing our dialogue with studentsabout how their interpretations of the literary texts situate them within broader sociopolitical discourses around the legacy of slavery and racial discrimination in our society.Review of the literatureScholars using combinations of Systemic Functional Linguistics (SFL), Bernsteinian sociology, and Legitimation Code Theory (LCT) have shown how values, attitudes, and moralevaluations (i.e. axiology) underpin what are seen as legitimate literary response practicesin standardized assessment practices at the secondary level of school subject English(Christie 2016; Christie and Dreyfus 2007; Christie and Humphrey 2008; Macken-Horarik2011).1 Disciplinary knowledge in subject English relies on ‘a shared set of culturally-valuedunderstandings about life and human behavior’ (Christie 2016, 158), which are developedthrough the guided interpretation of literary texts throughout the years of schooling. Fromthis perspective, success in writing in response to literature requires the development of a‘cultivated gaze’ (Maton 2014, 99), an implicitly shaped, rather than explicitly trained, meansfor recognizing and realizing valued dispositions towards an ever-increasing range of textsand ideas. The cultivated gaze in subject English involves enculturation into particular formsof expression and systems of values through the analysis and interpretation of literature thatreinforce one’s status as a legitimate knower (Christie 2016; Macken-Horarik 2006, 2011).Students of subject English learn to recognize and adopt particular dispositions towardsliterary texts by participating in genres such as character evaluations and thematic interpretations (Christie and Derewianka 2008). These genres require an understanding of hownarrative texts position readers to identify with particular characters and value positions(Macken-Horarik 2003; Martin 1996; Rothery and Stenglin 2000). Successful students recognize and realize these ideal subject positions when interpreting narrative texts, reproducing dominant cultural knowledge and values through normative interpretations of texts(Anson 2017; Macken-Horarik 2006; Martin 1996; Peim 2009). Christie and Humphrey(2008) study of writing from high-stakes assessments in Australia, for example, showedthat students must not only develop control over language resources that construe symbolicmeaning, but their interpretations must also align with dominant cultural values. Likewise,in an examination of response writing on high-stakes assessments in secondary school,Macken-Horarik (2006) found no that evaluators viewed critical analysis as a legitimateform of interpretation, requiring that students adhere to mainstream readings of the texts.While critical analysis is not a valued form of literary response in standardized testingsituations, critical literacy pedagogy remains a prominent model of instruction in subjectEnglish classrooms (Christie and Macken-Horarik 2007).SFL has a long history in the design of teaching practices intended to cultivate a criticalorientation to texts encountered in schools (see Rose and Martin 2012; Troyan, Harman,and Zhang 2020). As a form of praxis, or ‘embedding theory within practice’ (Maton,Hood, and Shay 2016, 72), SFL has been applied in an many different contexts throughteacher education, professional development, and design-based action research projectsin a wide variety of subject English contexts (Achugar and Carpenter 2018; Harman 2013;

Language and Education3Moore and Schleppegrell 2014; Rothery 1994; Schleppegrell 2020). This work has emphasized the important role of teachers in ‘providing students with an SFL-informed metalanguage that fosters their understanding of how to read, write and create semiotic texts innormative and resistant ways’ (Harman 2018, 11). This means going beyond helping students access privileged discourses to develop their ‘capacity to critically examine how practices and texts replicate, reinforce and/or redistribute power’ (Potts 2018, 203).From this perspective, this study set out to assess the degree to which the unit was effective in helping students develop a critical disposition towards the issue of enslavement inthe texts, and by extension, the issues of historical enslavement and its legacy in this culturalcontext. A study of the axiological constellations in the student writing provided a meansfor understanding the kinds of gazes acquired by the student writers. To this end, the studyinvestigated the following research questions:1.2.How did student language choices in the essays construct constellations of value-laden meanings around the issue of elvish enslavement?To what extent did the axiological constellations in the student essays demonstratethe critical orientation toward the text intended by the unit?Exploring these questions offers a means for understanding how different students recognized and realized the dispositions valued in this classroom situation as a means forreflecting on our teaching and assessment of the unit. Such reflection is important forconsidering how to address students’ value positions in classroom discussions and collaborative writing activities leading up to the independent essay and through verbal and writtenfeedback on student responses. This article specifically focuses on the axiological constellations constructed in two distinct independent essays from the data set that demonstratethe gaze each student adopted in response to the SFL-informed literary analysis unit.Conceptual frameworkAxiological constellations refer to the ways that positive and negative evaluations in a textare associated with other ideas and entities to build up contrasting value positions arounda particular issue (Maton 2014). The analysis of axiological constellations involves usingconcepts from LCT and SFL together to reveal the values constructed in classroom discourse(Doran 2020). Whereas SFL enables descriptions of how the language choices function toachieve particular meanings in classroom texts (Halliday and Matthiessen 2014), LCTenables descriptions of the underlying principles of highly valued knowledge and knowingin academic contexts (Maton 2014). Concepts from each theory are applied in this study toreveal the different constellations of axiological meanings in the student essays and considerthe ways these networks of value-laden meanings positioned students in relation to broadercultural issues around historical enslavement and its legacy of injustice in our society.Legitimation code theoryLCT has been used extensively to examine the hidden criteria for success in a range ofdisciplines and pedagogical situations and using the theory to inform teacher educationand professional development (Macnaught. et al. 2013; Walton and Rusznyak 2020;

4G. JACKSONWinberg, McKenna, and Wilmot 2020). LCT, often in conjunction with SFL, providesinsights into the ways that epistemic meanings underpin ‘knowledge-building’ and socialrelations underpin ‘knower-building’ through instantiations of different underlying socio-semantic principles in a wide range of disciplinary practices (Martin, Maton, and Doran 2020;Maton, Hood, and Shay 2016). Becoming the right kind of knower in subject English involveswriting successful literary responses (Christie and Derewianka 2008), which requires drawing together various entities and ideas into networks of value-laden meanings, or axiologicalconstellations (Maton 2014) to demonstrate a particular disposition towards the text.Axiological constellation analysis reveals how value positions are constructed as textsbuild up charged meanings that are recognizable and valued in particular discourse communities (Maton 2014; Tilakaratna and Szenes 2020; Doran 2020). This study used axiological constellation analysis to determine the degree to which the students in the textdemonstrated a critical stance towards the issue of elvish enslavement in the student writing.Analyzing the axiological constellations in the student texts makes clear how the writersalign and disalign ideas and entities in their texts in wats that construct value positions inrelation to broader sociocultural discourses. The constellations constructed in each essayprovide evidence of the degree to which adopted or resisted the cultivated gaze that wasthe broader goal of the unit.Systemic functional linguisticsSFL offers tools for systematically describing how particular language choices evaluatedand connected different ideas and entities in the texts, the linguistic basis for showing howthese meanings were built up into more abstract axiological constellations. In order to studythe values constructed through language choices in the student texts, this analysis drawson the SFL system of APPRAISAL, which ‘is concerned with evaluation—the kinds ofattitudes that are negotiated in a text, the strength of the feelings involved and the ways inwhich values are sourced and readers aligned’ (Martin and Rose 2007, 25). This study usestwo subsystems of appraisal, Attitude and Engagement, to reveal positively and negativelyevaluated meanings in the student texts and the ways these charged meanings are relatedto other entities and ideas.Attitude analysis reveals how values are built up over the course of a text through languagechoices that construe affect, judgment, and appreciation (Martin and White 2005). Affect concerns meanings related to emotion, judgment to the evaluation of people, and appreciation tothe evaluation of things and ideas. Attitude analysis identifies positively and negatively chargedideas and their sources, which form the initial c

Appendices to "Impact of Satellite Constellations on Optical Astronomy .

mary kole - How to Write and Publish Children's Books

Resource Materials on the Learning and Teaching of Film