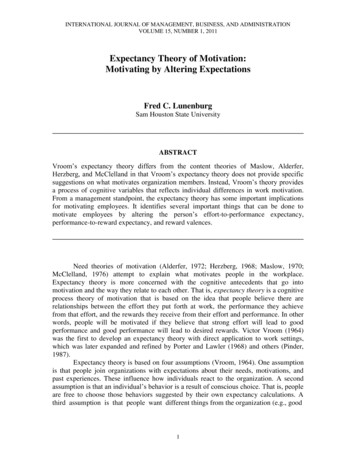 INTERNATIONAL JOURNAL OF MANAGEMENT, BUSINESS, AND ADMINISTRATIONVOLUME 15, NUMBER 1, 2011Expectancy Theory of Motivation:Motivating by Altering ExpectationsFred C. LunenburgSam Houston State UniversityABSTRACTVroom’s expectancy theory differs from the content theories of Maslow, Alderfer,Herzberg, and McClelland in that Vroom’s expectancy theory does not provide specificsuggestions on what motivates organization members. Instead, Vroom’s theory providesa process of cognitive variables that reflects individual differences in work motivation.From a management standpoint, the expectancy theory has some important implicationsfor motivating employees. It identifies several important things that can be done tomotivate employees by altering the person’s effort-to-performance expectancy,performance-to-reward expectancy, and reward valences.Need theories of motivation (Alderfer, 1972; Herzberg, 1968; Maslow, 1970;McClelland, 1976) attempt to explain what motivates people in the workplace.Expectancy theory is more concerned with the cognitive antecedents that go intomotivation and the way they relate to each other. That is, expectancy theory is a cognitiveprocess theory of motivation that is based on the idea that people believe there arerelationships between the effort they put forth at work, the performance they achievefrom that effort, and the rewards they receive from their effort and performance. In otherwords, people will be motivated if they believe that strong effort will lead to goodperformance and good performance will lead to desired rewards. Victor Vroom (1964)was the first to develop an expectancy theory with direct application to work settings,which was later expanded and refined by Porter and Lawler (1968) and others (Pinder,1987).Expectancy theory is based on four assumptions (Vroom, 1964). One assumptionis that people join organizations with expectations about their needs, motivations, andpast experiences. These influence how individuals react to the organization. A secondassumption is that an individual’s behavior is a result of conscious choice. That is, peopleare free to choose those behaviors suggested by their own expectancy calculations. Athird assumption is that people want different things from the organization (e.g., good1

INTERNATIONAL JOURNAL OF MANAGEMENT, BUSINESS, AND ADMINISTRATION2salary, job security, advancement, and challenge). A fourth assumption is that people willchoose among alternatives so as to optimize outcomes for them personally.The expectancy theory based on these assumptions has three key elements:expectancy, instrumentality, and valence. A person is motivated to the degree that he orshe believes that (a) effort will lead to acceptable performance (expectancy), (b)performance will be rewarded (instrumentality), and (c) the value of the rewards is highlypositive (valence). (See Figure dsValenceFigure 1. Basic expectancy model.ExpectancyExpectancy is a person’s estimate of the probability that job-related effort willresult in a given level of performance. Expectancy is based on probabilities and rangesfrom 0 to 1. If an employee sees no chance that effort will lead to the desiredperformance level, the expectancy is 0. On the other hand, if the employee is completelycertain that the task will be completed, the expectancy has a value of 1. Generally,employee estimates of expectancy lie somewhere between these two extremes.InstrumentalityInstrumentality is an individual’s estimate of the probability that a given level ofachieved task performance will lead to various work outcomes. As with expectancy,instrumentality ranges from 0 to 1. For example, if an employee sees that a goodperformance rating will always result in a salary increase, the instrumentality has a valueof 1. If there is no perceived relationship between a good performance rating and a salaryincrease, then the instrumentality is 0.

FRED C. LUNENBURG3ValenceValence is the strength of an employee’s preference for a particular reward. Thus,salary increases, promotion, peer acceptance, recognition by supervisors, or any otherreward might have more or less value to individual employees. Unlike expectancy andinstrumentality, valences can be either positive or negative. If an employee has a strongpreference for attaining a reward, valence is positive. At the other extreme, valence isnegative. And if an employee is indifferent to a reward, valence is 0. The total range isfrom -1 to 1. Theoretically, a reward has a valence because it is related to an employee’sneeds. Valence, then, provides a link to the need theories of motivation (Alderfer,Herzberg, Maslow, and McClelland).Vroom suggests that motivation, expectancy, instrumentality, and valence arerelated to one another by the equationMotivation Expectancy x Instrumentality x Valence.The multiplier effect in the equation is significant. It means that higher levels ofmotivation will result when expectancy, instrumentality, and valence are all high thanwhen they are all low. The multiplier assumption of the theory also implies that if anyone of the three factors is zero, the overall level of motivation is zero. Therefore, forexample, even if an employee believes that his/her effort will result in performance,which will result in reward, motivation will be zero if the valence of the reward he/sheexpects to receive is zero (i.e. if he/she believes that the reward he/she will receive forhis/her effort has no value to him/her.Expectancy Theory in Practice: Key Managerial ImplicationsExpectancy theory has some important implications for motivating employees.The model provides guidelines for enhancing employee motivation by altering theindividual’s effort-to-performance expectancy, performance-to-reward expectancy, andreward valences. Several practical implications of expectancy theory are described next(Greenberg, 2011; Hellriegel & Slocum, 2011; McShane & Von Glinow, 2011; Nadler &Lawler, 1983).Effort-to-Performance ExpectancyLeaders should try to increase the belief that employees are capable of preformingthe job successfully. Ways of doing this include: select people with the required skillsand knowledge; provide the required training and clarify job requirements; providesufficient time and resources; assign progressively more difficult tasks based on training;follow employees’ suggestions about ways to change their jobs; intervene and attempt toalleviate problems that may hinder effective performance; provide examples ofemployees who have mastered the task; and provide coaching to employees who lackself-confidence. In essence, leaders need to make the desired performance attainable.

INTERNATIONAL JOURNAL OF MANAGEMENT, BUSINESS, AND ADMINISTRATION4Good leaders not only make it clear to employees what is expected of them but also helpthem attain that level of performance.Performance-to-Reward ExpectancyLeaders should try to increase the belief that good performance will result invalued rewards. Ways of doing so include: measure job performance accurately; describeclearly the rewards that will result from successful performance; describe how theemployee’s rewards were based on past performance; provide examples of otheremployees whose good performance has resulted in higher rewards. In essence, leadersshould link directly the specific performance they desire to the rewards desired byemployees. It is important for employees to see clearly the reward process at work.Concrete acts must accompany statements of intent.Compensation mechanisms can be a powerful incentive in linking performance torewards. Compensation systems that reward people directly based on how well theyperform their jobs are known as pay-for-performance plans (Berger, 2009). These maytake such forms as “commission plans” used for sales personnel, “piece-rate systems”used for factory workers and field hands, and “incentive stock option (ISO) plans” forexecutives (Dunn, 2009; Mercer, Carpenter, & Wyman, 2010) and other employees(Baker, 2011). However, rewards linked to performance need not be monetary. Symbolicand verbal forms of recognition for good performance can be very effective as well(Markham, Dow, & McKee, 2002).Valences of RewardsLeaders should try to increase the expected value of rewards resulting fromdesired performance. Ways of doing this include: distribute rewards that employeesvalue, and individualize rewards. With a demographically diverse workforce, it ismisleading to believe that all employees desire the same rewards. Some employees mayvalue a promotion or a pay raise, whereas others may prefer additional vacation days,improved insurance benefits, day care, or elder-care facilities. Many companies haveintroduced cafeteria-style benefit plans—incentive systems that allow employees toselect their fringe benefits from a menu of available alternatives. Another issue that maysurface with expectancy theory is the need for leaders to minimize the presence ofcountervalent rewards—performance rewards that have negative valences. For example,group norms (see, e.g. the classic Hawthorne Studies, Mayo, 1933; Roethlisberger &Dickson, 1939) may cause some employees to perform their jobs at minimum levels eventhough formal rewards and the job itself would otherwise motivate them to perform athigher levels.ConclusionVroom’s expectancy theory differs from the content theories of Maslow, Alderfer,Herzberg, and McClelland in that Vroom’s expectancy theory does not provide specific

Appendix A Syllabi for New Courses in the DNP Program

A modular theory of learning and performance - Brown University